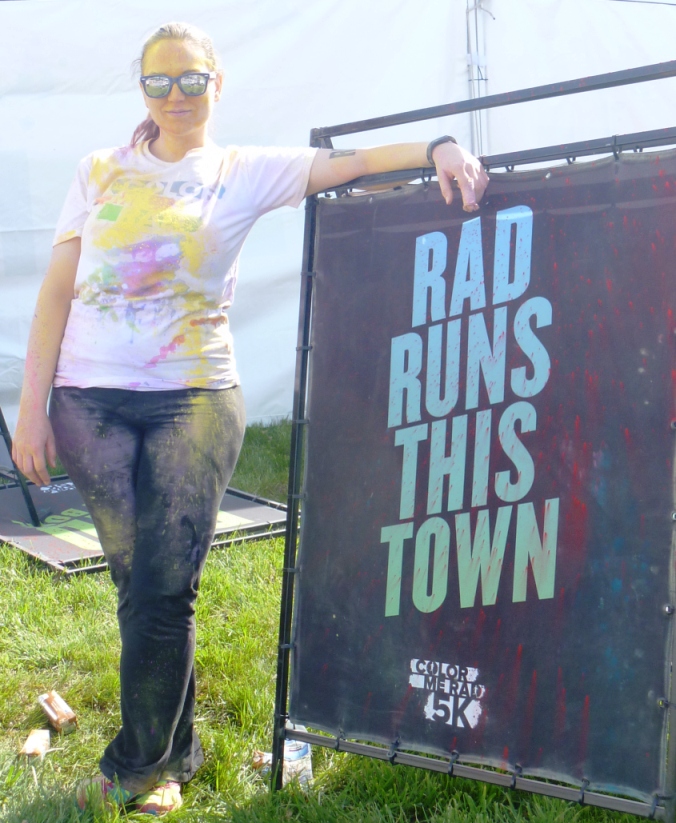 This past weekend, I went down to Knoxville, Tennessee to stroll casually along through the city and get color thrown on me. It was more fun that I’m leading you to be believe. I ran/jaunted it with a very wonderful person, but in an effort to protect her privacy, I’m going to keep her out of some photos. She doesn’t like being circulated online.

The shirt that was included in registration, plus my sweet new ink. Also shown is my bandaged finger, damaged in a tragic tomato slicing accident.

The organizers encouraged us to wear white, in order to make the sprays of color pop. We had a surprisingly difficult time finding a white shirt the day before our race (because we are cheap), so we decided just to wear the shirt that came with the race. But we lucked out, because they were selling white shirts at the race for the low price of $10. We just had to stand in line for 20 minutes to get it.

Totally worth it though. The purple is already popping!

We walked the whole thing, and it was very pleasant. The best part, of course, was being sprayed with color.

And of course it turns out that I got a faceful of the least flattering color to be caked with.

To add to the effect, I ended up with pink dots all over my face, so it looks like I had some kind of skin disease. To the organizers, I suggest less yellow next time, maybe more blue or something. Blue looks good on me. Thanks for catering to me.

There were professional photographers set up to take photos, but the line was so dang long, there was no way we were waiting around for that. We improvised by finding a sign that had been abandoned behind a tent.

Other than the random bits of trash, it’s not too shabby!

Overall, I would rate this a great experience, and maybe I’ll do the DC one too. We enjoyed our casual stroll, and luckily we didn’t feel like a bunch of lazy people either, because there were a lot of people walking. Our brothers and sisters in sloth, united.

We decided to return home messy, in order to show our spouses the colorful messes we had become. When her small child saw me, she was horrified, likely because it looked like I now had a contagious skin condition. It actually was kind of contagious, because the powder fell off pretty easy.

I am really hoping that the white shirt is permanently stained, because it looks like watercolor. But since I’m still too lazy to have washed it, I still don’t know what will happen. This is why I would make a bad detective. I could figure out the mystery easy enough, but meh… I’ll figure it out later.

Now I’m so jazzed up about 5ks, I have to find another one to do!