After spending all my free time on the bobcat, I feel like I’ve reached a new level of awareness. It’s like a form of meditation, as long as it involves being covered with dirt and dust at the end (I don’t follow those hippie lifestyles, so this could be entirely possible.)

Why does it take me 30 minutes to an hour to get the hang of using this thing every time? Oh jeez, the bumps, and the abrupt movements are doing a number on my body. I never thought I could be so sore from basically being inactive.

Why do I keep literally spraying myself with dirt? It’s guanteed to happen at least once a session. Why can’t this go through your head Courtney!? Raise the bucket really high, get sprayed with dirt clumps and rocks. Dirt is much heavier than it looks, you think the pain of it falling on me would teach me a lesson.

Perhaps my next big project should be something safer, like painting my house. I’m really not digging the sky blue brick. 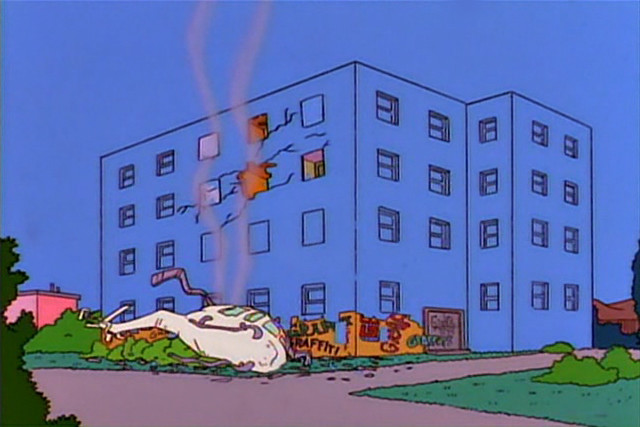 It’s only a matter of time.

The plan is to steal this color scheme I saw in New Orleans. And then I can say things like, “I’m respecting the heritage of the house, because I kept some of the blue!”

And then people can be like, your house is brick! Bricks don’t come in blue! You make no sense!

When I was originally house shopping all those years ago, I once saw a house I dubbed, the most beautiful house in the world. It was listed at something like 1.3M and for a brief hour, I tried to figure out if there was something I could do to afford such a house. Stripping? A life of crime? It would be worth it! Surprisingly, it actually isn’t too far away from my current house, not that that I could ever find it now. (If I could, I could just drive my car up and gaze at it’s beauty. And then the owners would be like “There’s some crazy woman stalking us!” and I’d be like “No, not you, just your beautiful house!”) It was a french style mansion on 10 acres of land, and it had that same color scheme. I’m not saying I’m unoriginal, but I am saying if a color scheme already works, just steal it and make it your own. Also, crime doesn’t pay, unless it pays the mortgage of your big fancy house. Then, obviously, it pays.

Sometimes I feel like I’m the star of a television show about construction, except my only viewer is Vintage, who stares at me through her stall window approximately half the time.

My ratings are completely in the toilet! I need to appeal to the small pony demographic!

I have an mp3 player, and now that I’ve listened to Jimmy Buffet dozens of times, I’m wondering if I made the right choice buying a farm in Virginia. Warm summer breezes, french wines and cheeses sounds pretty appealing, but then again, I can have those here. But I could move to the beach and work at a tiki bar, and spend my time drinking and swimming. But then I remember sharks live in the ocean, and I don’t think I’m good enough to fight one off. Plus, beachfront farms are pretty expensive, and that is clearly the only option. But I did decide that my riding arena needs a sound system so I can listen to Jimmy Buffet, ride, and drink daiquiris and such. I informed Dave, and being that he’s Dave, got right on that. Now I have outdoor speakers sitting on my kitchen table, awaiting install. Sweet.

Also been listening to Genesis… what was that guy thinking when he left them?! Clearly his best work was done there. Every time one of his songs comes on, all I can think about is:

Which then makes me think about my all time favorite South Park “Guest Star”:

“Hey isn’t that the Gladiator guy? Over there, behind that bush next to that tugboat.”

South Park could possibly be one of the best shows ever created. But then I feel guilty for saying that over Futurama. But you betrayed me Futurama! Your “new” episodes were some of the worst ever created! There I said it!

What I really meant was they were great episodes. All glory to the hypnotoad.

Speaking of TV related thoughts, why isn’t there an app for use on web browsers that could block a certain reality tv family from showing up every time I check the news? I seriously do not care what they are wearing or where they are going, why are they being featured right next articles on wars and politics!? (…unless they are saying they are evil too?) Every time I see something posted about them, a small part of me dies. There is no GD way they should be listed next to the news about the world, when all they are doing is basically existing. STOP SHOVING THEM IN MY FACE!!

A lot of my time is spent fantasizing, and obviously, much of that is about food. And then I had an epiphany. I know the secret to Anita’s breakfast burritos. Unless you live in northern Virginia (totally tempted to capitalize Northern), you probably don’t know what Anita’s is. But they have the most amazing breakfast burritos, and the secret is american cheese. It took me forever, but I get it now. I used to try it with cheddar, but it was so off. Eggs, american cheese, salsa and bam, you got yourself a good breakfast burrito. Now if only I had the motivation to cook, I’d be eating them all day, or at least until I ran out of tortillas, and then was too lazy to buy more, which is exactly what happened.

Now go out there and take on the day.