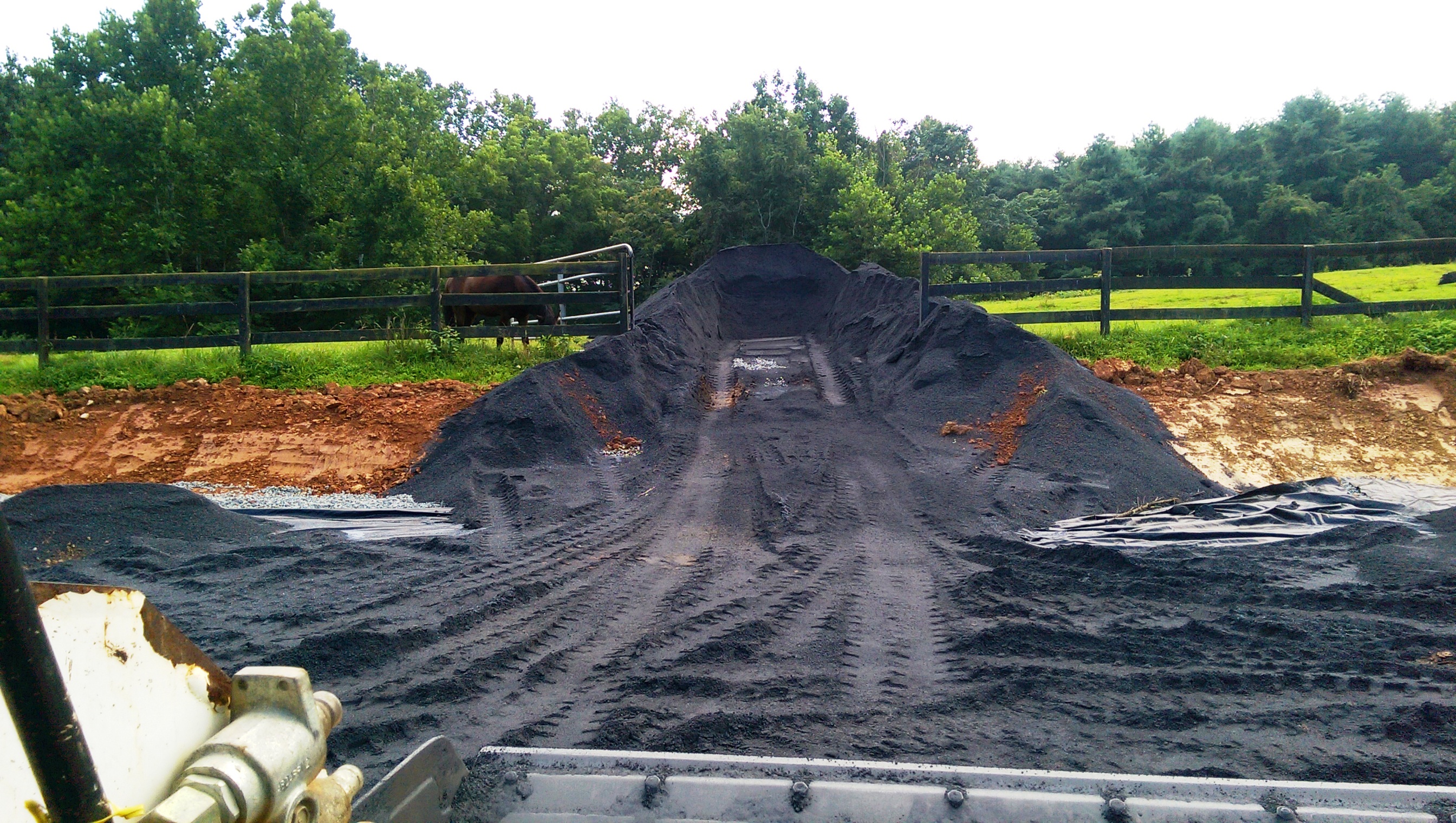 I have been slow to update, but I don’t have anything to talk about anyway. I didn’t even have a lesson this week because I had to go to a work meeting. Dang work, always interfering with my riding.

So all I have been doing is working on my arena (and sleeping). Last weekend, the arena was finally level enough to begin stage whatever, and I rolled out geotextile fabric, and that’s when Dave found me, covered in dirt and about ready to give up on life.

Save money on makeup by doing your contouring with dirt!

Before the textile is unrolled, they weigh at least 100lbs. Obviously they get lighter as they go, but let’s be serious, I’m a woman with questionable strength so any weight is pushing it (it could be a pun because I was literally pushing the fabric out!). This was the hardest part of arena building so far, and it was made far, far worse when my stone dust arrived, because when the trucks dumped it, it created wind that blew all the fabric out of place. Womp womp.

Wrinkled fabric now has 50 tons of stone dust on top of it. Don’t think it will be smoothed out anytime soon.

I tried to keep up with the stone dust delivery, but it came so fast that the piles snaked out into my pasture. Then it started raining, so I called off the delivery, as the trucks have to drive through my pasture to get to it, and things have a habit of sliding down my hill. Unfortunately, another truck arrived after I called it off, so they had to dump it in my front yard, where it’s lived for the past few days. I’m feeling pretty redneck right now.

You might be asking why it now lives there (or maybe not, but I’ll tell you anyway.) The bobcat had to be returned on July 29th, so now it’s just me and my seemingly puny tractor, that only has 1/3 the capacity to hold stuff in it’s bucket. It’s going to take a while to move all that stone dust, and I just haven’t felt up to it yet. So I guess what it comes down to, I’m really lazy. And really, every day, sleep just seems so much better.

In other news, I lost three chickens in the past two weeks. I think the universe heard me saying I had too many chickens and decided the best course of action was to rid me of some lovely hens instead of the excessive amount of roosters I have. A moment of silence for three sweet hens:

Dora, gentle hen that was always in the mood, if you get my drift. Hopefully this is not what caused her death.

Re-Spoof, a silkie I never really made friends with because she’s too shy. But she was always with her rooster love, and now he wanders alone and it’s the saddest thing ever. Her name was ironically from another silkie I had that was killed named Spoof, so she was the new Spoof. It’s time to official retire Spoof and all variations of Spoof.

Nessie, who is missing feathers here because she used to have an abusive jerk of a rooster, but we got rid of him. Alternately friendly, and then scared of life. Behind her, the late Dora’s fluffy little butt.

And now a moments anger for my tiny jerk rooster who should have sacrificed himself for any one of these hens but did not, and instead chooses to attack my shoe.

IT SHOULD HAVE BEEN YOU!!

And to give it a positive spin, Fluffers is still reigning Champion of Living, and is still the oldest hen I have, from the first group of chickens I ever owned.

I’m pretty sure she could make it as a chicken model. There must be someone somewhere that needs to advertise something chicken related that’s not chicken flesh. Or she could do editorial!