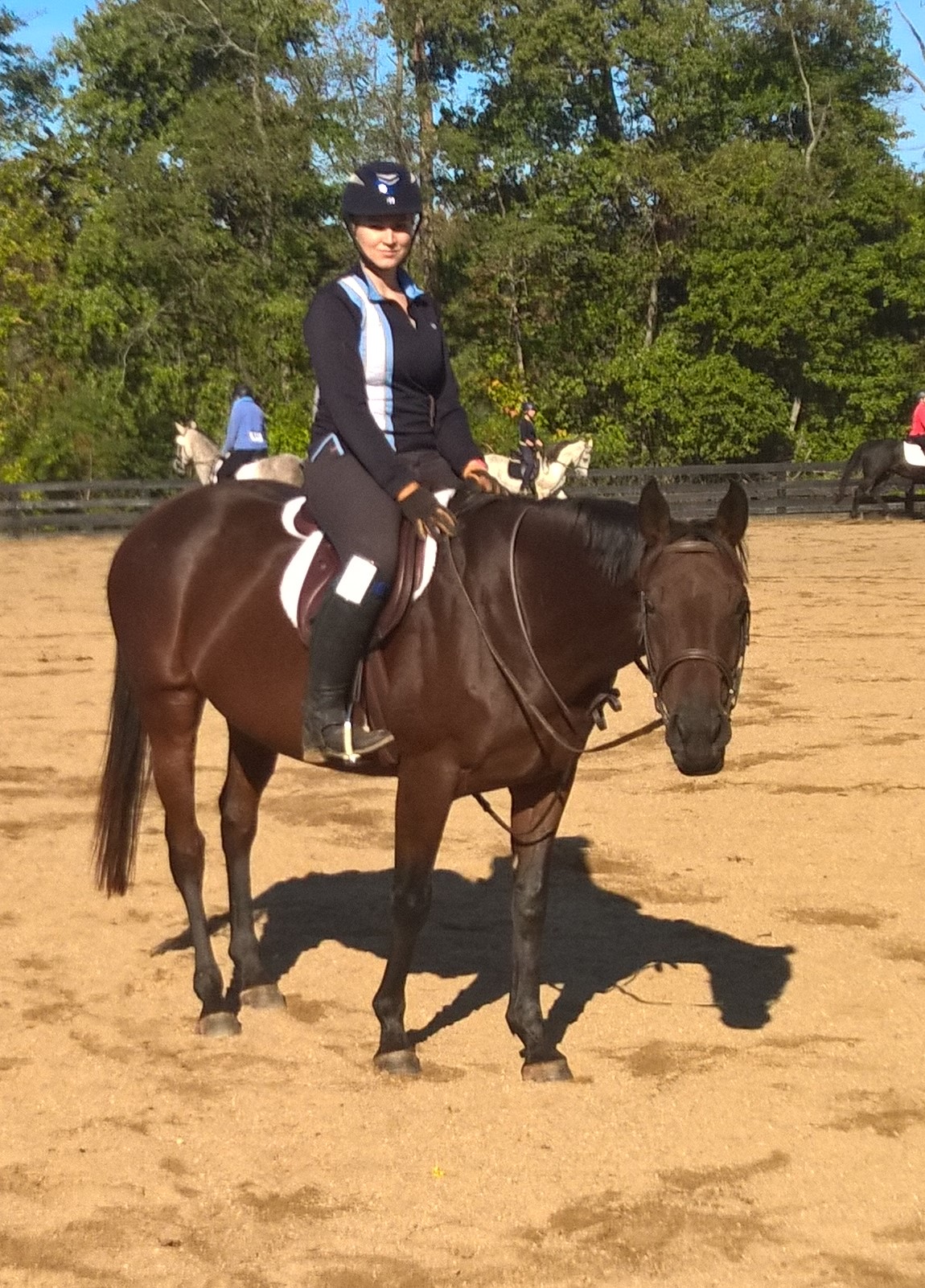 First things first – after Saturday’s classes, kind hearted Dave decided that Berry’s girth was pinching her, and we must get her a new girth immediately. This may have been the case, as she was a super good girl using her new girth, so I’m glad we got it. But I also got this snazzy new helmet. 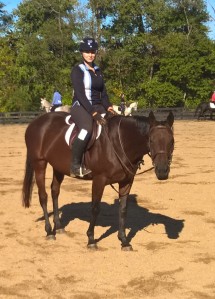 As pictured here, along with Berry giving Dave the Berry Eye (TM).

The tack store bought a bunch of protypes of 1K helmets, so there was a bunch of super crazy looking, custom looking helmets. (since the buyer did not select the customization, I wouldn’t call them actual custom helmets).

I got a navy suede one, with the shiny navy plastic, and a two rows of Swarovski crystals. There was also a gray version of that one, but Dave and I made a mutual decision to go with navy.  The craziest one had a stripe of neon pink snakeskin. There was a toned down version of metallic green/blue snakeskin too. There were also ones with wavy leather stripes, matte and shiny plastic shells, with all sorts of metallic accents.

Moving along to the actual show, the day started with pleasure classes. These are the type of classes I did as a kid. First you put the western tack on, and did w/t/c, and then you put the english tack on, and did w/t/c. Except in my case, I had a loon for an instructor who thought after many (5? 6?) years of lessons, and many times cantering, that suddenly I shouldn’t canter anymore. So I just did w/t/r, the r being the growing resentment for my instructor that ended in a crazy teenager dramatics. 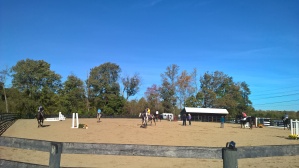 The dawning of the pleasure class.

The class was big enough that they split it in 2. I went first, in a group of 8.

I thought Berry and I did alright. I was very happy because Berry didn’t drop her head to do her bad dressage curl, something I’ve been working with my trainer for a while. I think I mentioned it before, but I used to take (not so great) dressage lessons with her and it created this evasion technique that makes me feel like I have no control. Actually, the whole weekend she was really good about not doing it, so I was thrilled.

The class ran a bit differently than I was used to… But to be fair, I haven’t done a pleasure class in 15 years. There was a great deal of walking, and then the judge asked for us to sit three strides of the trot, and then post three strides of the trot. She told us they did it at the Spanish Riding School, so we should practice it. For go-as-you-please, she had us all line up in the center and go one at a time.

Berry became a bit fussy at times, mainly because she was excited to be with all these horses, so I would half halt and slow her down. She was definitely one of the slowest in the ring, but I felt like it was obvious when she got excited because she would toss her head. I was still proud of her though, I thought she was doing great.

When they called the winners, I wasn’t part of them. I figured that made sense, Berry is very green. But while they were handing out the ribbons, the judge walked over to me and told me she would have placed me, but it was obvious that Berry doesn’t like her bit. I told her that Berry is just fussy because she’s green. She said she was sure it was the bit, and she brought a bit to the show because she wanted to show it to people, and I should come by and see it during the break.

I was a bit taken back by the exchange. I wasn’t expecting a ribbon as Berry is green, and there were many good horses/riders there, but I’m very surprised both by her critique of the bit, and that she would come up to me to tell me this as I’ve never had a judge seek me out to tell me anything. Also, she brought a bit to show people? Is this something judges do?

I’m not quite sure what to think about the bit critique, as my trainer hasn’t said anything is wrong with my bit, and she isn’t the kind to be quiet about things she doesn’t like. It’s a french link full cheek, which I always thought she went really well in.

We left the ring, and the second group went in, and I will admit that I puzzled over this exchange for 20 minutes while they completed their class. I also removed her martingale completely, since apparently it’s not allowed for pleasure classes. I’m learning new things every day.

Once they were done, they combined those who signed up for w/t/c pleasure, which included me. Back in the ring I went.

We did the w/t on the rail, and then we all went in the center for the cantering. I hadn’t actually cantered yet, the warm up ring was a bit intimidating that morning and I felt like I just wasn’t enough space. But other than an initial “ACK, canter?!” from Berry went I asked, she was really good. She even picked up the correct lead both ways. 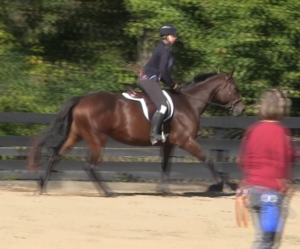 It’s time for Berry to remember her racehorse training!

Luckily she was super slow as a racehorse!

Berry is ready to celebrate by taking a nap. I was practicing my stretching I think. When you are a working adult, you have to fit it in when you can. 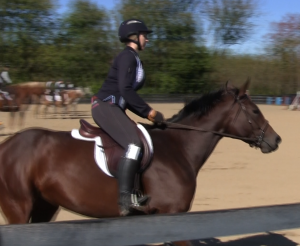 Sadly, for Berry, there was more cantering left to do.

To my surprise, I ended up placing 3rd. The judge even commented as we filed out that I was doing much better. I felt like I was doing pretty much the same, except Berry was getting even more fussy because she was being harassed by flies, and apparently had ants in her pants and wouldn’t stand still while we were lined up. So I’m not really sure what to think about all this. 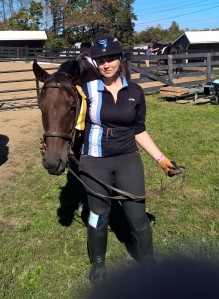 I was pretty happy, but I think Berry was just dreaming of leaving this awful place of work and going home.

Next up was dressage. It was USDF Intro A, and I did not know it at all, so I spent some time watching other people go so I could suck in their knowledge like a knowledge sponge. And it worked, and I managed an accurate test. 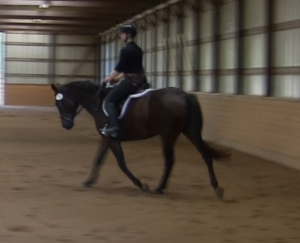 I actually I have no idea how I did because I left before they released the results and the tests.

As a general observation though, there’s a surprising amount of walking in this test.

The same judge was judging the dressage. When I came up to her, she told me there’s something wrong with Berry’s walk, and I should get it checked out. Berry does have a weird walk – she twists her hocks. She’s done it since I got her as a baby. At the time, I had my amazing dressage trainer look at her, and she thought it was from her being lazy and it would improve as she grew stronger. My current trainer hasn’t commented at her walk at all, so I think this is the case, although I imagine that being tired probably exacerbates it. But the judge thought I should get someone to film it so I could see it, and get the farrier to fix it. Maybe I should film her walk and post it here so I can get a general consensus on it.

There was another class after that, but I scratched because I think Berry was getting tired. It sounded really cool though – Prix caprilli, which is a dressage test with jumps. It would have been fun, but I didn’t want Berry to hate being ridden forever.

And thus ends the OPRC rally. It got me pretty jazzed up about doing more showing though, so I’m going to figure out what to do next. And, make a vow that the next time my trainer goes to a show, I will go with her! (unless it’s one of those crazy big shows, we aren’t ready for those).