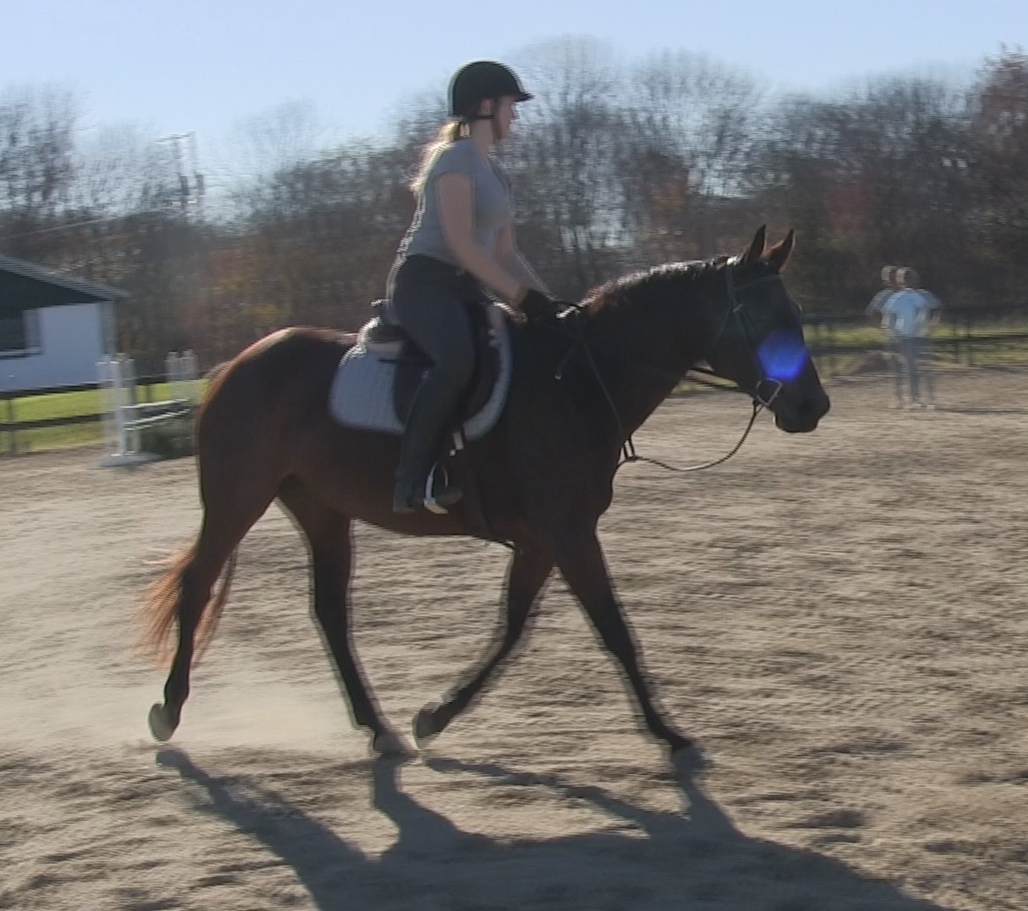 All of last week, I was eagerly awaiting my show on Sunday. It would be my first show in a while, my first with my trainer, and my first true hunter show. My trainer thought it was a good idea to enter in the flat classes, school her over the jumps in the warm up, and see how she does. There was no pressure to do a course, it was just about a nice, relaxing experience, getting Berry to jump a few unfamiliar jumps. Basically, exactly what I needed to calm my nerves. Berry would probably be fine.

I took a lesson on Saturday to prepare. As expected, after my trainer saw my latest clip job, I was told to try again. How can this be so hard?! Berry’s coat was compared to having been run through a lawnmower, which was fairly accurate. Lots of lines, missed spots, divets. I tried to use the excuse that it was dark when I did it, but they asked me why I didn’t use a light in my completely electrified barn. Dang it, they are on to me!

After scoffing at how much she dislikes the pleasure classes, my trainer had me practice the pleasure walk, trot and canter. Berry was quite amendable to this, and happily took the long rein and trucked around the ring. Still not sure how she will do in a ring with 20 other horses, but at least she’ll do it when she’s completely alone in a place she’s completely familiar with. So there’s that.

Then we jumped. Started out just doing a simple vertical, then the scary brush line, then the terrifying flower box brush that I had so much trouble with before, and then an entire course. It was terrifying. But thrilling. I did it, and I survived, and I wasn’t just a wooden block on her back. I was steering, getting the majority of distances, releasing, sometimes getting the right leads on landing, All the pieces are fitting together, and I am figuring out how to do this. Hurrah! Now I just need to not be terrified so I can enjoy it a little more. I think that will come with more experience, though. At least I really, really hope so.

After this thrilling lesson, I pointed out to my trainer that Berry had a lump on her leg. She examined it, and even though she hadn’t been lame during the lesson, it was still hot and I needed to not show. Berry needed her leg iced, and some time off. You did this on purpose Berry! I know it!

Poffins and I are both unimpressed with Berry’s work ethic.

Of course, I felt bad that I just rode poor Berry when she had an ouchie. As a gesture of goodwill, I spent the next half hour reclipping her, much to her annoyance. Sure, she had to stand in the wash stall for 30 minutes and be poked and prodded, but I care about her appearance, and don’t want her to be embarrassed. Feeling good on the inside is all about looking good on the outside! (The House Bunny) This time, I had a professional give me some guidance, although apparently after that it still wasn’t good enough, because when I came out, my trainer asked me when I was going to fix her clip job. AHHGG!!!

The next day, she got iced again, and then I sat around wondering what to do. Both of my horses are recovering from leg injuries (riding Vintage unfortunately made her leg flare back up). Pony isn’t here to play with. If I am not riding, what do I do all day!?

So I let out my poor neglected chickens, and planted some trees.

Who’s a pretty chicken!? Definitely Fluffers! (clearly the most beautiful one, or for the more subjective, she’s the one on the right)

I’m kind of terrible at anything involving plants. I think as soon as the plants realize they’ve come to my house, they try to shrivel up and die before they have to suffer living on my property. Poor Albert of the Colorado Spruces, First of his Name, was run over when I mowed the lawn. The point is, I need almost a constant supple of new baby trees to keep up the quota of trees. So I had a backfill of baby trees to plant.

I had decided to plant a hedge around the arena, because I am cheap and fences are expensive. After planting 20 shrubs, Dave and I notice Berry coming closer. It was like one of those horror movies where the figure doesn’t seem to be moving but comes progressively closer every time you look up. I’m guessing she was bored, maybe she was regretting her decision to get injured to get out of showing.

Pictured: A horse in the process of not showing.

Of course, I screamed at her, flailing a bamboo stick the bushes had come with, and she swirled around, flinging the bush high in the air as she fled. I grumbled, replanted the bush, and we continued planting the rest. Then she started sneaking up again. Dave ended up having to be on Berry watch, letting me know when she started nosing a bush so I could shrill at her again.

Eventually we finished planting and left the area, Berry following us. I’m hoping this feeds into the “Berry was bored and found us entertaining” theory, rather than “Berry is destructive and is going to rip up all the bushes when we aren’t looking” theory. I suppose only time will tell!

But on a good note, Berry’s swelling is almost gone already. Just in time for it to rain for an entire week.