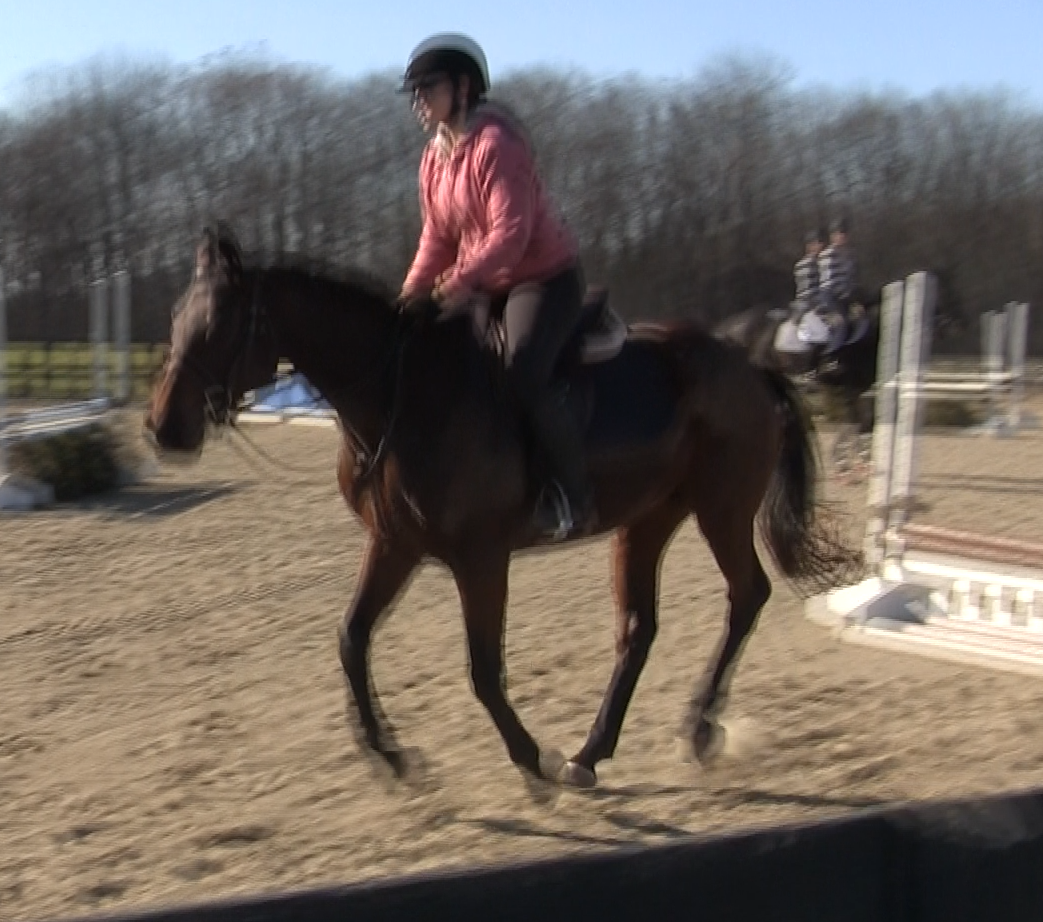 After feeling disappointed that I didn’t do better at my show, I had a prep talk with myself. I sternly told myself that I need to put in much more effort, and be braver. At my show, I basically went into potato spaghetti mode, put in no effort, and forgot everything I’ve been working on for months. Effort is directly proportionate to results, so I need to make the effort.

I took my lesson on New Year’s Day, and other than being eager to make more of an effort, I convinced my friend to start taking lessons with me. This was the second time we had a lesson together, and it’s been a blast. She’s been riding the school horses, but next time she’s bringing her own horse. Although I am clearly biased, I love my trainer(s) so I really hope she enjoys the lessons, and is able to get to the level of riding she wants with them.

This is the first lesson that I took a crop. I’m not used to riding with one, but in the few (or one) time I used one with Berry, I noticed her increased effort. I even asked at the show for a crop, was kindly offered one, but forgot to collect it before I went into the ring. The crop will now be part of our regular tack, so we will both give our full effort.

Almost as rare as seeing a unicorn: Berry was excited about something.

I used it one time on her. We had been chatting in the center of the ring, and I asked her to start working. She ignored me, so I tapped her. She immediately became springy and forward. So springy and forward, that I was excused from our exercise of holding 2-point because my trainer thought she was a bit too forward. That was a nice perk – I’m sorry friend, that you had to hold it so long (muwahaha). Berry had decided to remind me that at some point she had been a racehorse, and she frolicked around the ring for a while, checking out everything going on outside the ring, trying to rush my friend, investigating the footing with her nose… But like all things, she eventually decided this was too much effort and went back to being normal Berry.

We started jumping, and being tired of her always refusing the first jump, I gave her a huge squish with my legs a stride from the jump, and she leap upward and over, in a surge of power that I would have never expected from her. At least I know she’s capable, even if I was told off for squishing her.

Berry says, “My favorite activity is standing still. I like it so much I don’t even mind receiving bad clip jobs while I do it.”

We practiced that jump until I could both encourage her forward, get her all the way to the base, and trust that she would jump. There were no refusals, and she halted a few strides out every time.

My trainer decided it is time. Time for Berry to learn flying lead changes. This is an exciting moment for me, as I’ve never had a horse that could do flying changes, and I’m sure it would be exciting for Berry if she understood the magnitude of this moment.

We practiced going down lines, bringing them back after the jump, and doing simple changes. Berry did so awesome. I really could feel her body getting ready for the change. It was incredible, and I was so proud of my girl. The changes have not happened yet, but it feels like they will be right in place soon, with a bit more practice. I even dreamed of flying lead changes last night, and obviously did them perfectly. Now I just have to hope all that late night practice will have been worth it.

I was also proud of my friend, who had only jumped a few times before, and bitty little crossrails at that. My trainer likes to challenge riders, and she pushed her. She was doing the same jumps, gates and bushes, the same lines, and doing the simple changes, too. The first time she realized my trainer wanted her to jump a flower box with fill (below) she actually yelled out, “Are you sure this is the right jump!?”

The jump of suspicion and intrigue!

For the finale, I did the whole course with the simple changes, but that did turn out to be harder. I became a little frazzled with all the jumps and changes, but on the second go, my trainer decided it was a good enough effort, and we could end it there. My friend was super relieved that my trainer let her off the hook, and did not make her do the course.

My trainer said it was the best I’ve ever ridden. My plan of putting in effort was a success!

I am going to another show this weekend, and hopefully the results will be much better! (assuming I remember everything, don’t go comatose, stay in the moment, etc, etc.) I was supposed to have a lesson this week, but since the ground has frozen, and my barn does not have an indoor, I’ll be winging it. You win again, weather!!!