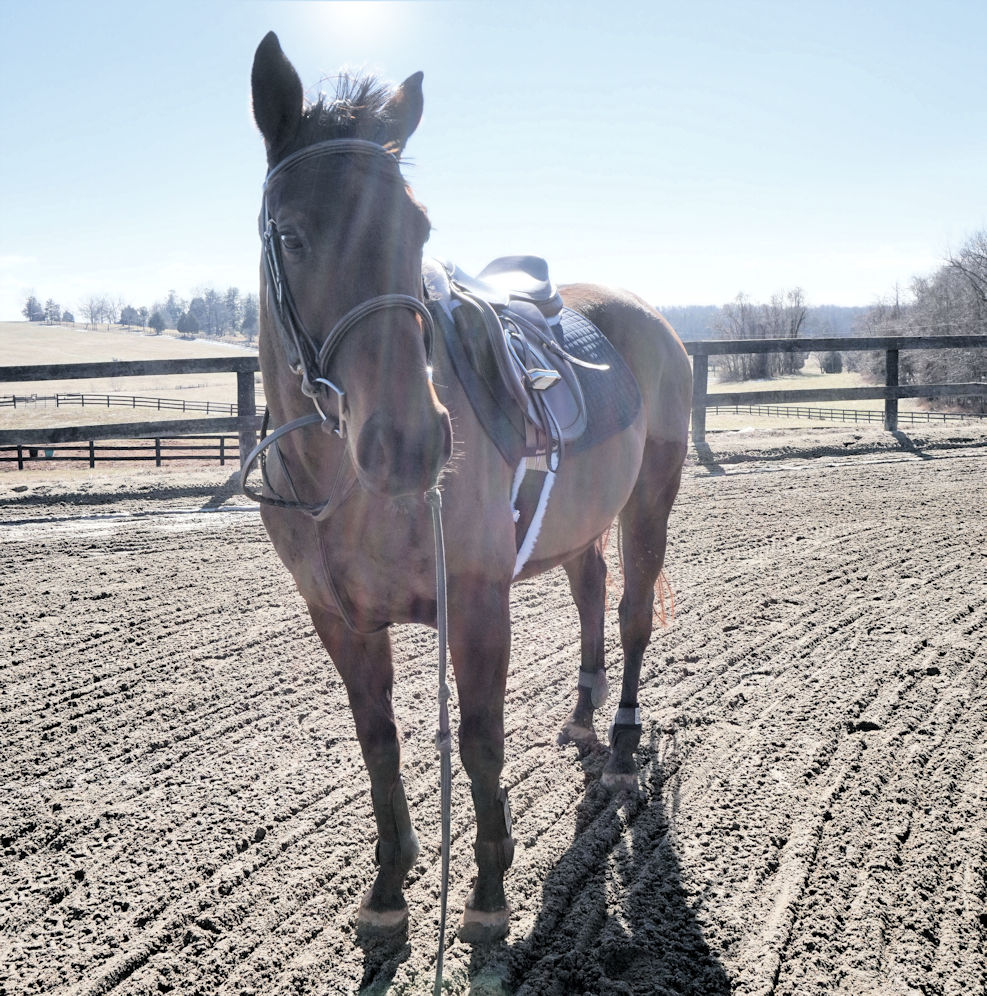 I finally rode! With the weather improving, I needed to make up for my lesson deficiency. It’s only been three weeks, but it feels like it’s been a lifetime since I rode last. It’s not right.

Anticipating that Berry would be a little bit crazy, I decided to head over there early so I would have plenty of time to lunge the crazy out of her first. Unfortunately it wasn’t a very smooth morning. I had to haul my trailer out of its mud pit, which wasn’t actually hard, just annoying. When I tried to lock up Vintage in her high security prison so she wouldn’t destroy herself or the property while I was gone, she decided to make a bid for freedom, and shoved past me to get out, despite my slaps and yells. I admit to being a little bit intimidated by her suddenly acting like she was going to run me down, so I may have just decided to step aside and not get run down by a frantic horse.

She shot out, and sprinted across the field, spooking Berry, and taking her with her. They went to the complete opposite end of the pasture, but luckily didn’t run away when I approached them. Then Vintage was easily lured back by some treats. I had to restrain myself from screeching at her right that second, as I didn’t think that would assist me in bringing her back into captivity.

She was easily captured, and I took her back to her prison cell, where she got a little lesson in backing out of my space. And then I gave her and Berry a few minutes to calm down. Then she was left, all alone again.

Berry is ashamed at Vintage’s behavior, but much too dignified to say something.

Berry loaded easily, and while this is pretty minor, I went back into my house tack room to grab something I forgot, and I think I literally tripped on everything in there. Suddenly, everything is scattered on the floor to irritate me. It was feeling like one of those days where the amount of irritation just continually grows and grows, until something super minor will happen, and then I’ll have melt down. Just like a toddler.

Anyway though, with all my stuff, and Berry, we headed on over to the barn. When I got there, crazy winds had come out of no where. Wind is quite possibly the worst riding condition. Although I haven’t tried torrential rain yet, so I may change my mind once I experience that.

I lunged her, and she seemed pretty quiet. I found this encouraging. I lunged her for a pretty long time for her, especially since I almost never lunge her, but I wanted to be completely sure she wasn’t going to act crazy. When I stopped, she had decided standing was way better than moving, so I took that as a sign she was ready to go. She was even patient while I took lots of pictures of her standing at various angles.

I got on, and she immediately decided the best thing was moving, and standing still was the absolute worst. She got very springy, and felt ready to explode. I got her working immediately, making circles, setting the pace, getting her to bend.

When my trainer came up, Berry choose that moment to go crazy. Well, for Berry, crazy. She exploded for about 4 strides, bucking and carrying on. Then we went back to work, and she started bending nicely, carrying herself better, and keeping a good rhythm,. This is is entirely due to my trainer talking me through it, because I think I forgot how to ride.

But she was being a good girl, and really, she got right down to work. The only thing that was making her a little crazy was the insane wind. Turning into it was like being hit by a semi truck. I could feel her tense up every time we approached the turn, and it knocked her off course. We felt bad punishing her for it, so I just went with it. 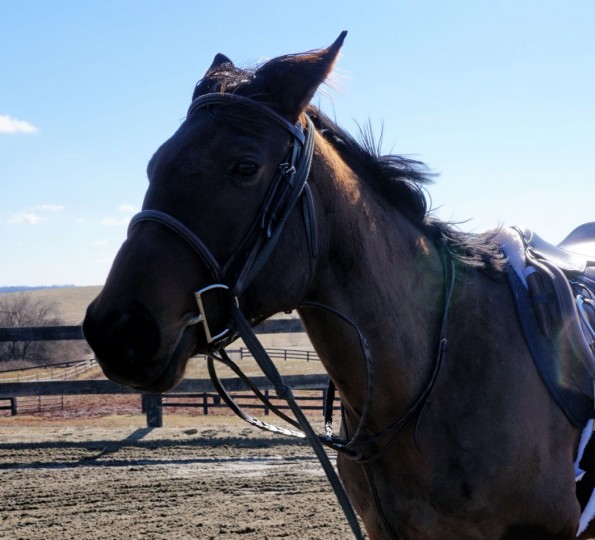 My trainer set up a little course. I told her I was feeling extremely wussy, so we just started with a little line. It was mostly perfect! We added a jump across the diagonal. She started to get excited here – The jump went well, but the line got a rushy. The first time, I failed as a rider and pulled her off course. But the second time, I got her under control, she came back to me nicely and jumped well.  Then another jump coming off the corner – a bit rushy, but we got it in the end.

Of course, as soon as my ride was coming to an end, that’s when the wind started to die down. I think that’s what everyone else was waiting for, because suddenly the ring was full of horses and people.

I was really happy when my trainer told me my position improved. I credit it to working out regularly. Yay! Finally a positive to working out! Speaking of fitness, my trainer had told me to fatten up Berry. She wasn’t skinny, but she’s a hunter, so she needs to be fat. She was pleased with my efforts. 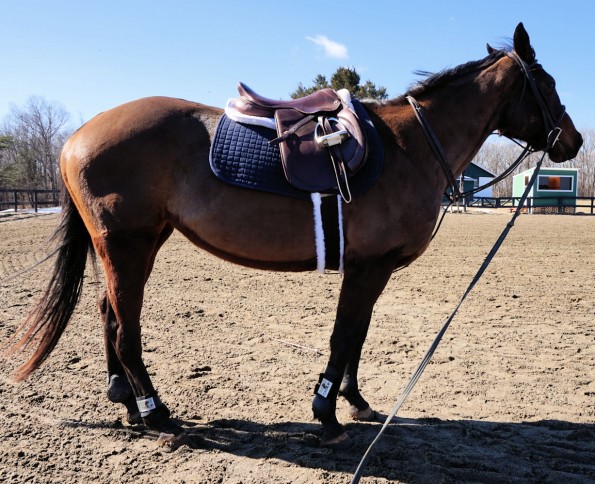 I think that’s quite possibly one of the worst conformation shots I have ever taken of her, so I feel kind of bad exposing her like this. Plus, you can see her embarrassing clip job. Embarrassing for her, I mean, and possibly the people I show with, and not at all embarrassing for me, because it makes me laugh.

I like seeing other people’s over time conformation shots, so I think I will start taking some of Berry, standing square, to see how she builds her muscle this year. Because she will be having a busy year!

Overall, it was a really fun ride, great lesson, really fun little course, and one of the best jumping experiences I’ve had. Berry was happy jumping, I was happy, and we are figuring this thing out. It was a day where I can’t wait to go out and ride again, because it was so awesome. There’s a show this weekend, and I’m considering it because of how awesome today was, but I feel like I need to make this more consistent before trying again.

But just getting out and riding in general will make me happy!