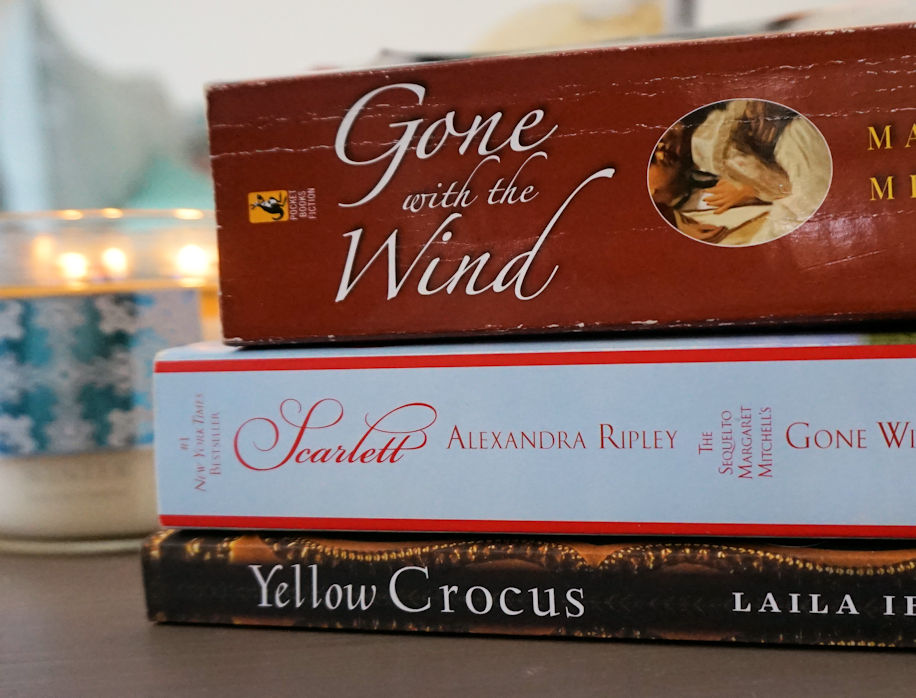 I should point out that I mean books set in the mid-1800’s, not written then. In January, as I received an amazon gift card, I decided I wanted to finally read Gone with the Wind, and then when I ordered it, some other books were suggested, so I got them, too. Because I am a terrible person, I usually don’t give credit to things I think are well done, and usually just complain and whine about the terrible things. So to change that up, I will start by saying some good things. I’m still figuring out how to say good things about stuff, thank you for your patience and understanding.

Gone with the Wind, by Margaret Mitchell

I have determined that this is a good book. I believe other people have made the same determination, so I don’t think there’s much more to say. If you liked the movie, you’ll love the book. Pretty much everyone knows this story, so I won’t get into too many details. The movie follows it pretty well, just the book has way more details that greatly enhances the whole story. It’s an engrossing plot, and it’s an interesting look at that time of life. It’s a long book, but it’s a very easy read. Highly recommend.

Now let’s get into not so good:

I am still in shock. I can’t believe the Margaret Mitchell estate allowed this to be the official sequel to GWTW. I’ll start with what’s good about this book – I like the cover. Moving on, here’s my laundry list of things wrong with it:

I stopped actually reading the book, and just started skipping ahead because the book was so dull. I had been hoping there was so redeeming feature, but there wasn’t. But Rhett and Scarlet got back together, and they have a new child to replace that other one, now everyone can be soothed that all is right in the world. Gag.

The basic plot of this is the two points of view of black slave taken from her child to raise a white child, and then the white child she’s raising.

Sometimes when I’m reading a book (or anything) I notice something that makes me get an inkling that the author has some kind of agenda. I didn’t notice it at first, but by the second mention, I was thinking something was up. By the 6th mention, I started to realize the author has some kind of obsession with breast feeding. I have nothing against breast feeding, and it’s not my business if someone breast feeds their child, or not. That said, reading about the various women breast feeding various children added nothing to the story. I could see once, maybe twice, because the slave character was supposed to be the wet nurse, but after that, it was excessive. These weren’t just offhand mentions either, it’s described graphically, each time.

Other than the breast feeding agenda, the book is lackluster. I was expecting a lot of emotion and drama, as the white child grows up loving the mammy, but mammy is kind of indifferent towards child. Their interactions don’t seem like ones of love, or of wisdom being passed. Mammy gives the impression of finding the white child annoying, and tells her lots of things she finds wrong with plantation life. She eventually runs away, so the two stop interacting at all.

The child was maybe 12 or so when she loses her mammy, and the story is told primarily from her POV after that, and she continually references her experience with mammy as she grows up, eventually making her question her life on slave owning plantations. The problem is, it’s just flat out boring writing. I don’t think the general premise is a bad concept, at all. It could have been an excellent story, if only it wasn’t so dull.

The ending follows the same lackluster feel of the rest of the book. The child and mammy were made out to have the love of a mother/child, but they don’t even end up as friends. It doesn’t go along with what we are supposed to believe about their love the whole book.

I wish someone else had written this book, or someone else could take this book and revise it. It could have been good, maybe with some rewrites.

In conclusion, I am now bitter about the terrible books. I was thinking about trying to find similar books to redeem these, but I’ve moved on to a mountain climbing/hiking non-fiction kick now, as I am rereading Into Thin Air now, likely unconsciously inspired by my decision to go to the gym (Everest/gym, it’s basically the same). It is a good book though. Lots and lots of goodness. Except for, well, the whole concept of disaster, death and suffering on the mountain. But those aside, totally good. A++, would read again.