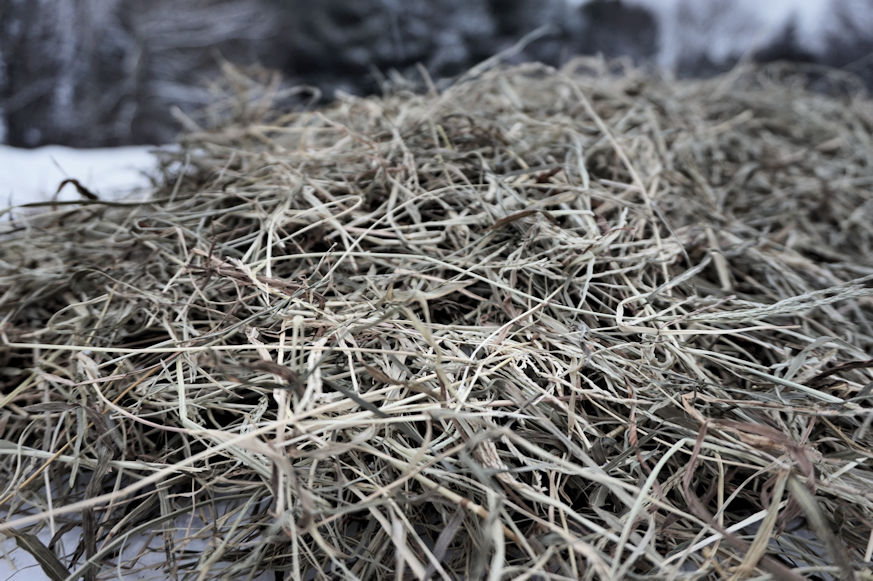 Product works great as food, but ease of use and ability to acquire is seriously lacking.

The horses are really picky about what they will eat, so they basically force me to buy this stuff. I tried giving them sticks, and small bits of lumber, but they didn’t seem to think those were food. They will eat the processed pellets I provide, but they are so expensive, I decided to give hay a try.

It comes in compressed in either small squares, or big cylinders. For a while, I used the squares. The first time, the experience was heavenly. A man brought a big trailer out to my barn, and he and the husbands (only one was mine), unloaded it all and stacked it. Unfortunately, he got out of the hay business, so all he did was make me bitter at the amount of work hay takes.

Next, my parents decided to start haying their former pastures. I offered to buy their hay, as it was cheaper ($2.50 a bale, baby), and also for sentimental reasons. My horses were in those fields. Their poop fertilized the grass, for the next generation of horses. Or in the case of Vintage, for herself years later. 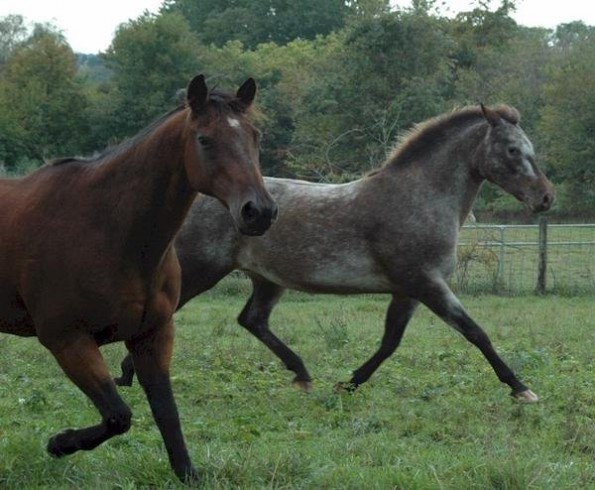 Because I was literally only paying for the grass to be cut and baled, I had to go out there with my parent’s jeep and a trailer, and collect all the hay. And then stack it in the shed, because my trailer wasn’t big enough to take it all home with my at once. Every time I wanted hay, I drove my trailer the 50 miles to go take it out of the shed myself, load it, drive it back, unload it in my own barn.

Because there was so much of it, I used that hay for a while. Eventually I stopped coming for it, prompting my dad to frequently ask when I was going to come get the hay that was dominating his shed, because he’d really like to use his shed again. It seemed easier to avoid the calls. 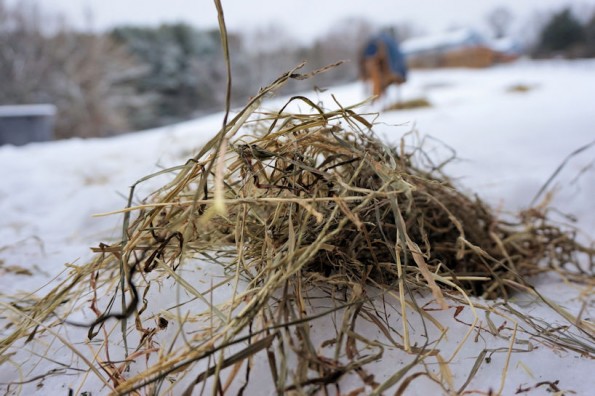 Eventually that hay became a backdrop for an archery range. It seemed a better use of its time.

The next time cold weather came, I was going on a vacation. This is shocking in itself, as people with farms don’t go on vacation. It just doesn’t happen. But someone else was paying for it so we decided we could spring the zero dollars for it. 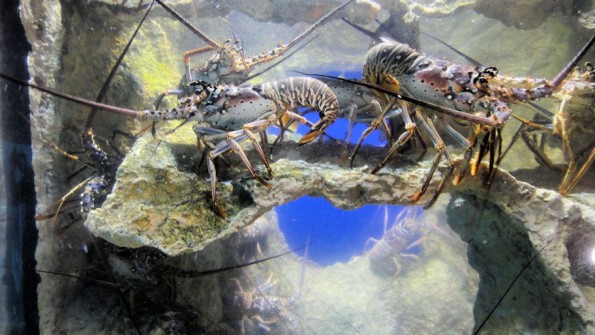 The highlight of our trip to Atlantis/Bahamas. Yes, I do love beady eyed creatures, and hate everything else, so get off my lawn.

In anticipation of having a horse sitter, I decided to get a round bale to feed the horses. I hate giving them access to a round bale, because it seems like their favorite activity is to poop, pee, and sleep in it. Then it decomposes so slowly, you end up with a rotting circle of hay in the pasture. But to make life easier for someone else to come and take care of them, I decided to go for it.

I found a nice lady online, and she tasked her son with loading up our bale, and we brought it back. As I’ve mentioned several times, my property is super hilly. When it’s wet, it’s impossible to get to my barn with a vehicle. And this was the day we figured that out.

It was snowing that day, and I had a feeling that the truck wasn’t going to be able to get down there, so I had the brilliant idea to park the truck at the gate at the top of the hill, and push the bale out, where it would roll gently down, and stop in a swell about 40 feet down. So that’s what we did. Except the bale didn’t stop. It slowed down, and I thought it was going to stop, but it had too much momentum, it rolled right through it, and started down the hill. And picked up speed. And then crashed right through the three board fence at the bottom of the field, taking out a post and the boards all around it.

Did I mention we were leaving in less than 12 hours to go on our trip? And now the horses had no hay, and also there was a giant hole in my fence.

Well, Dave said. No problem! We will drive the truck down there and just pull the bale right out so the horses can eat it! Then we can patch up the hole and be on our way. Except he didn’t say it quite like that, there was a lot more frustration in it, but I understood his meaning.

We drove the truck down the hill, put a chain around the hay, and attempted to pull it out. The truck just slid around, and wouldn’t go up the hill. We got worried then, and decided to disconnect the truck from the hay. That did not help, and the truck was officially stuck.

Dave and a friend of his tried to wench the truck out for several hours while I desperately tried to find more hay. This was especially difficult as I didn’t have a truck to go pick it up, and it was late. Eventually, Dave declared defeat on getting the truck out, and I convinced my neighbor to call her hay guy in the morning. Then we left, and a deer tried to murder us by leaping at and running at the car as we drove to the airport. But I don’t think that was related to the hay, it was just icing on an already overly frosted cake.

From that experience, we determined the lost hay bale was of excellent quality, and we’d like more of them, and also that we needed to bring hay to the barn only when it was completely dry. We started buying exclusively from him, making several trips to fill up the barn on dry days, and then going a month or two without needing more hay. 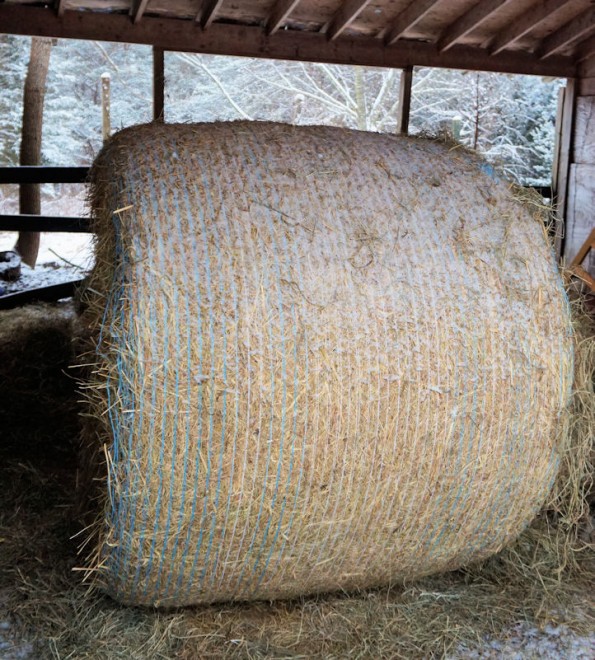 This worked well for all of a winter. But since we started to get the not so nice bales towards the end of the season, this year we struck a deal with our hay man. We’d pay up front for a whole bunch of bales, plus pay for storage (we don’t have much storage), and then we could just come over every few weeks and get a few. We thought we’d finally found the perfect solution to our hay solution.

Except that after we’d already paid for an absurd amount of hay, our hay guy was never available to actually give us the hay. At first, it just took about a week before he’d get back to us to give us the bale. Then he started ignoring us. Then he said his tractor broke. It got to the point where we had no hay, and he wasn’t able to give us more. He offered some square bales to make up for it, but then wasn’t available to give it to us, because he suddenly left the state for a week.

After spending thousands of dollars on hay, we had no hay. Once again, I had to scramble to find more another hay source. Why?! WHY?! I just want the hay I paid for!!

A friend gave me her hay guy’s contact, and luckily he was quite accommodating of my frantic, babbling call requesting emergency hay. His hay is sweet, green and lovely. Smells like triumph. 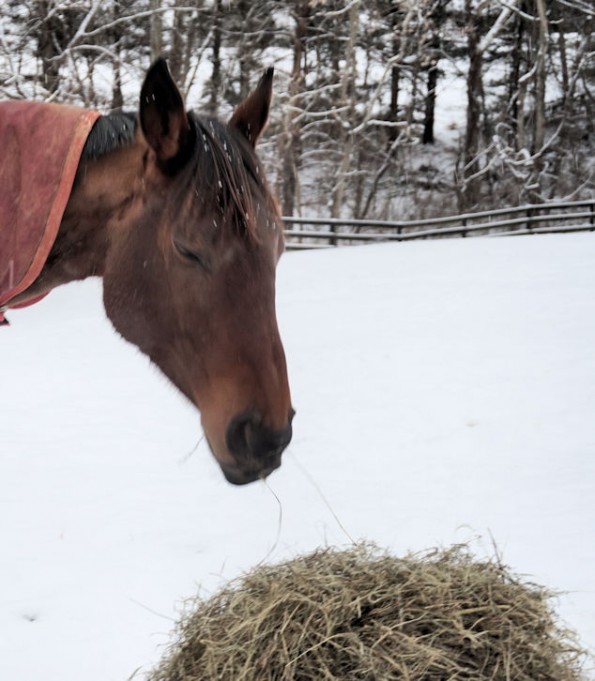 As for our normal guy, I completely thought we were out the thousands we paid, but he has since reappeared and did give us our product. Thank goodness! Now I just have to hope he continues to be there to give us the rest of the hay. We should have enough of it to last all the way into next winter.

Overall, nice product, but service is inconsistent. Grass might want to consider organizing better and watching over their franchises to ensure quality.