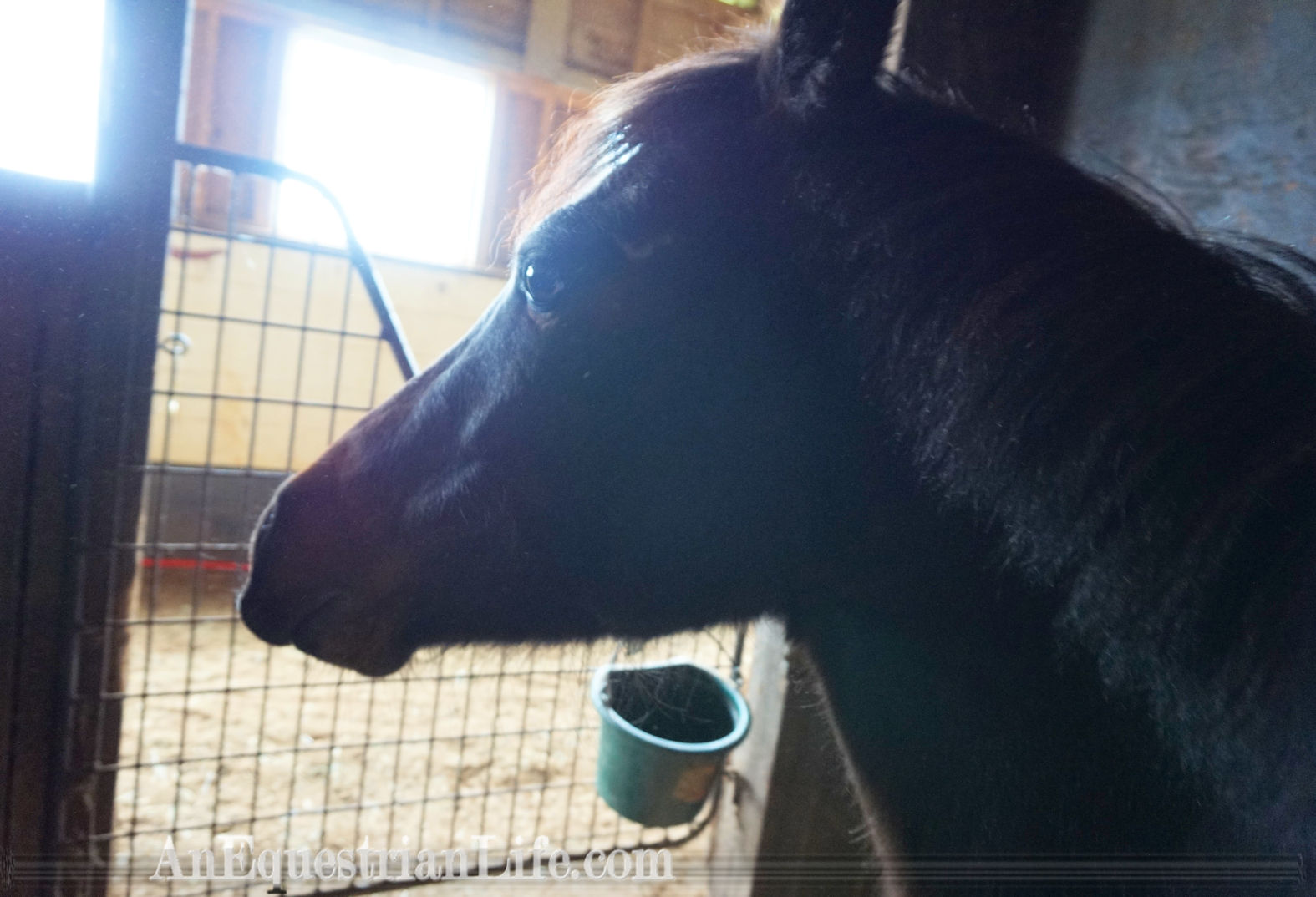 Pony Man was standing quietly at the edge of his stall. He liked to put his hooves on the threshold and stick his head as far over as it could go to watch the aisle. Luckily that obnoxious goat was nowhere nearby, so there were no distractions as he contemplated life.

He vaguely remembered a time when he was young and naive, and lived a wild, carefree life. But now, after his extensive education, he was a sophisticated young pony ready to take on the world. If only his old mares could see him now, they’d regret being so mean to him! He was a worldly, big city pony now, at his barn with 30+ other horses. He didn’t even get bitten through the stall window anymore, he had a completely private stall!

As he smugly considered his new life, someone showed up at his stall. She looked vaguely familiar, but he couldn’t place her right away. She came right into his stall, and began itching his shoulders. He was distracted by the itching, but there was something about this woman that made him wonder… why was she here?

She put on his halter and walked him down to the grooming stalls. His mind started to race. She wasn’t his trainer! What on earth was she doing? His mind raced as flashes of memory came back to him. The untoned legs. The lounging. His old mares! She was from the old farm!

He immediately put on his dignified face. She might tell the old mares what he was doing, he needed to be on his most sophisticated behavior. He stood alertly in the crossties, watching as they attempted to scrub off his thick winter coat. Those mares were going to be so jealous when they heard about his classy manners, and how primly he stood, his front hooves neatly together.

They brought him down to the ring where another horse was being ridden. Luckily he was now a well versed socialite, and could easily hold a conversation with the giant, dignified animal. Hopefully that would also get back to the mares. 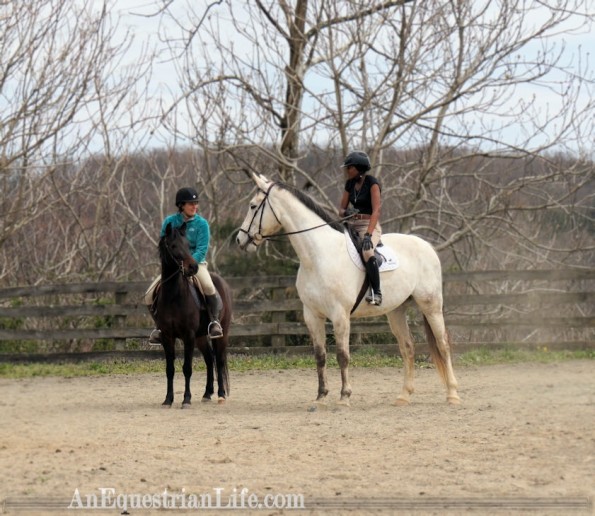 “Oh you are most fascinating, do go on!”

His trainer put him through his paces, every now and then yelling out things to the other woman. He tried not to concern himself with such things. 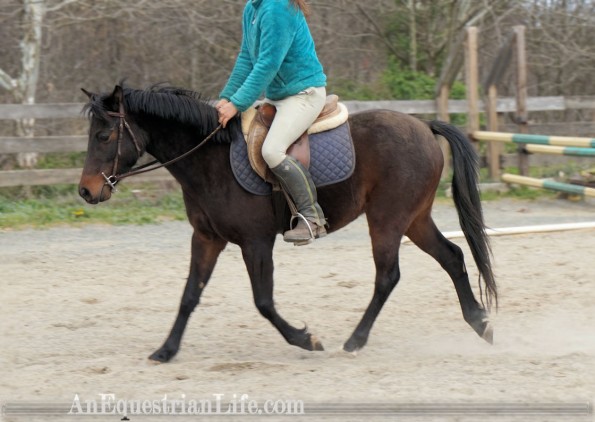 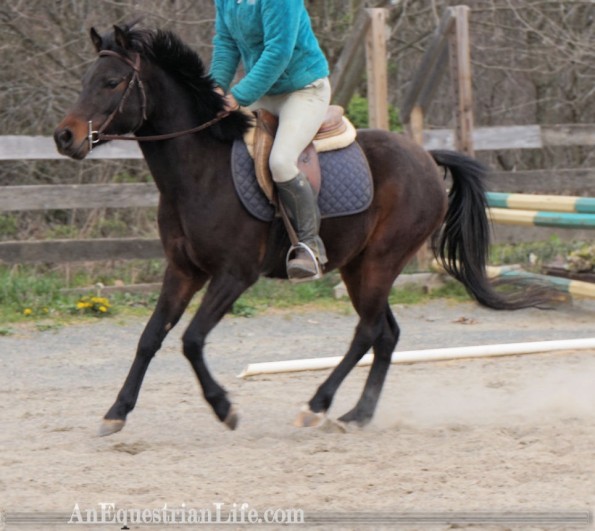 Then she declared he would be jumped. He wasn’t quite sure what to think of this jumping business. On one hand, it was kind of interesting, but on the other hand, it required effort, something he didn’t really like doing. But when he didn’t put in effort, he was swatted with a stick, something he found rather annoying. Since he really wanted those mares to be impressed, he put his best pony face forward. 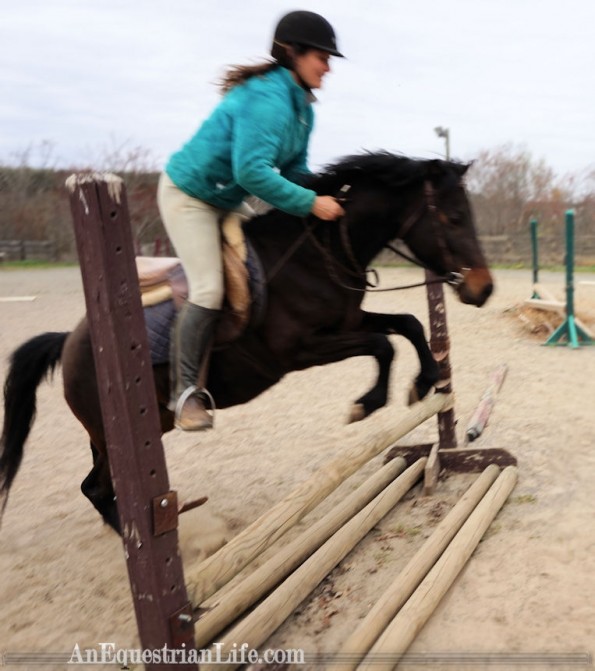 It was the first time he went over the so-called “vertical”. It was okay, but it required more effort than the little x’s, and he wasn’t sure how he felt about that yet. There were a lot of confusing feelings in his adolescent pony mind.

Ever since that other woman had showed up, he had a sinking feeling he knew what was to come. Sure enough, after being ridden around a bit by his trainer, she did do the most horrible thing. She climbed up on him. Then she had the nerve to say things like, “He’s so narrow!”, and “It’s like riding a balance beam!” Such insulting terms offended his sophisticated sensibilities. He puffed up, but did absolutely nothing because that would have required energy. He instead stood quietly, hoping the woman would be so unbalanced she’d just tumble right off, even while halted.

They stood for a few minutes because the giant beast of a horse was doing a course. He pitied the poor animal, forced to jump at the human’s bidding. He was way to dignified to go around in such a manner.

No sooner were the thoughts formed, the woman forced him to start walking around. He wobbled a bit, hoping she’d lose her balance and fall, but she clung on with those monster legs. She even carried around that annoying stick, and gave him a tap when he wouldn’t go forward. 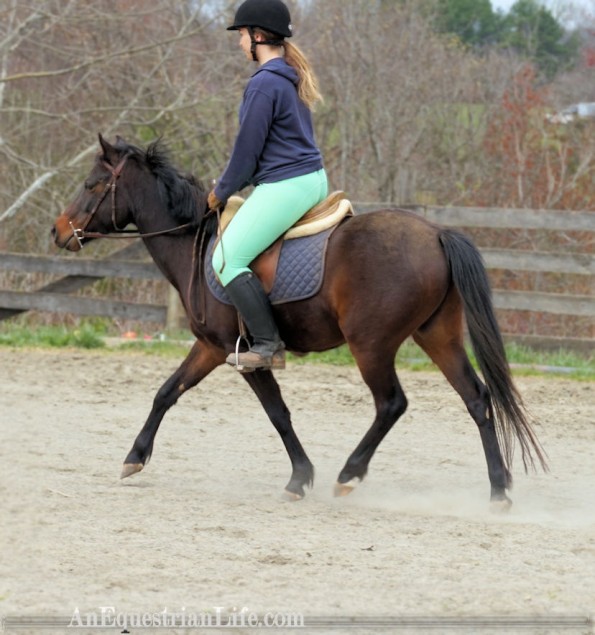 When she didn’t fall off, he patiently carried her around, deciding it would be better for the mares to hear about him being an amazing pony. He even stopped abruptly for her when she’d lose her balance, or failed to keep constant leg pressure. He was a gracious, accommodating pony, and all should hear about it. 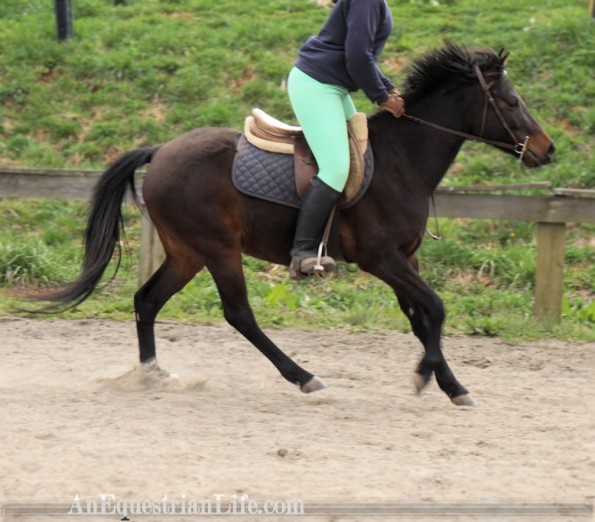 After a few trips around the arena, the woman declared that her legs hurt from clinging to his backside. He snorted derisively before he remembered he was now a cultured gentlepony, and therefore must not laugh at the weaker species.

He was pleased when she dismounted and it was all over. Now he could go back to his stall and brood about the mysteries of life, as befitting of a sophisticated young pony. He was less pleased when his trainer and the woman started discussing her coming back another time. Wasn’t one time enough!?

He listened in as they untacked him. He was to be in training for one more week. Then he would be returning to his old farm. He’d been living the big city life for so long, he hardly remembered the old farm, except for how mean those mares had been. Would they appreciate his new classy demeanor? He wasn’t ready to go back and face his old bullies. It wasn’t fair, it wasn’t right!

He had one week to mentally prepare himself. He could do this. He might need some flashy new clothes, and a pretend backstory, but he was going to blow those mares away at their reunion. They’d rue the day they were mean to him, and now they’d finally be his loyal band of mares, accepting him as their gracious stallion!