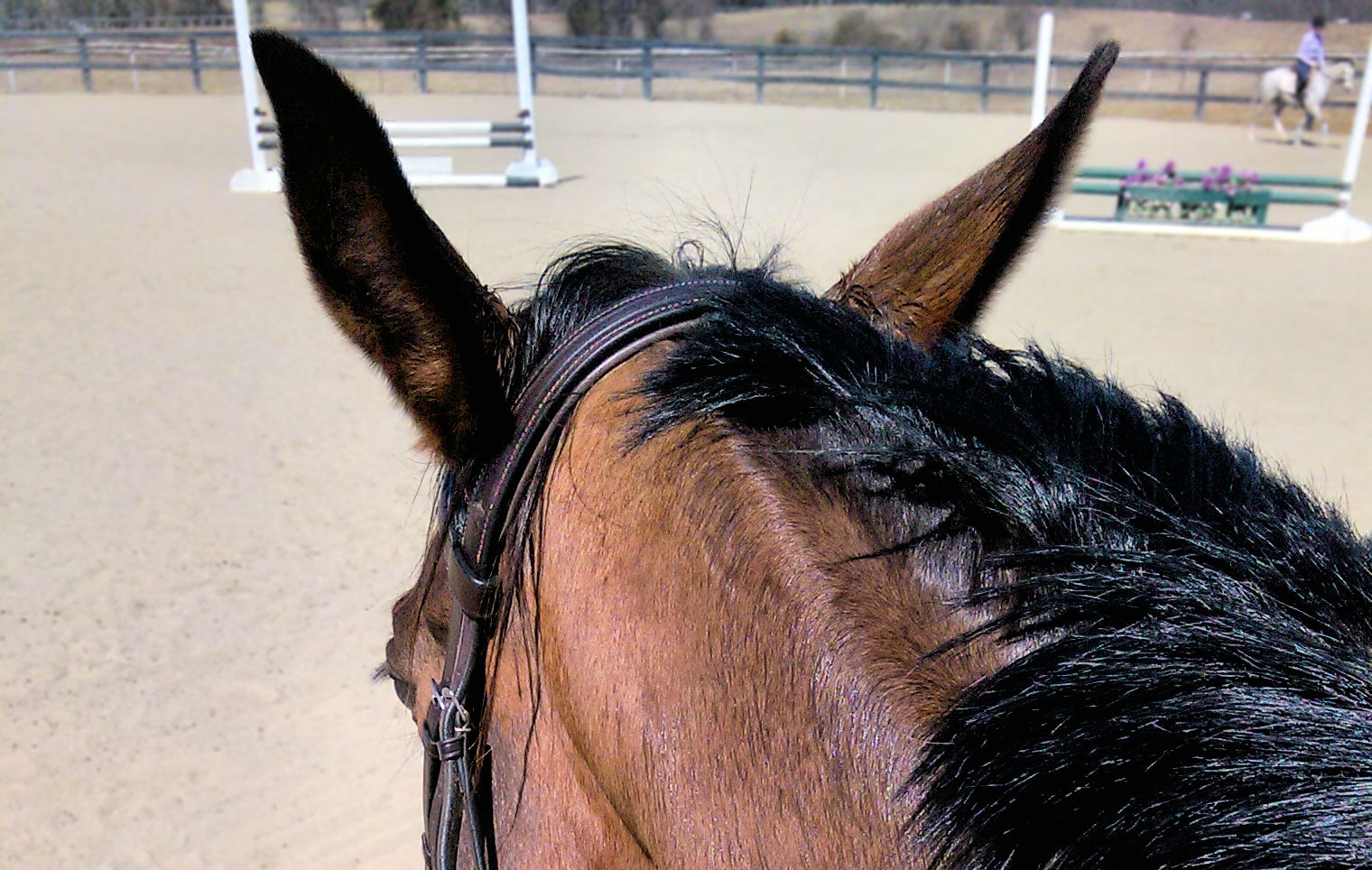 In the past, I’ve gone extended amounts of time without a trainer. When I was a kid, I literally thought I knew all there was to know, causing me to get untrained Vintage and fall off so many times I lost count. Also, one time she threw her head back so hard, it smashed my face and I literally saw stars. It was good to knock that one off my bucket list early in life, hopefully before permanent brain damage sets in. 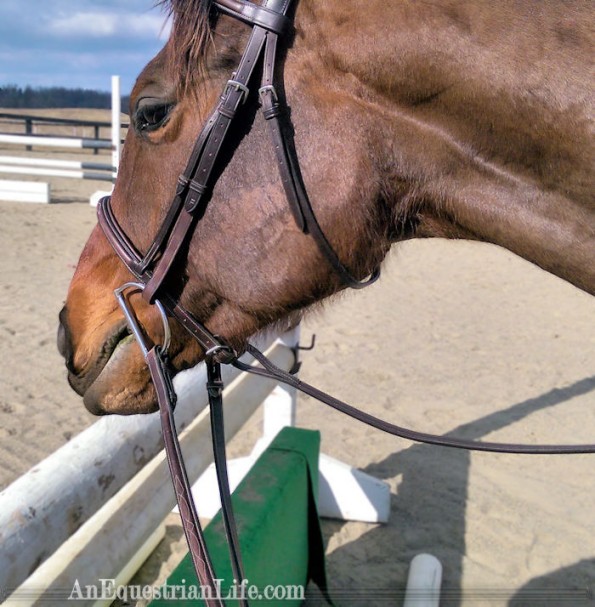 Does she need a martingale? Probably not, but I am kind of attached to my face at this point. Although – would  insurance cover a nose job to restore a smashed nose? …I ask because a friend…

Also, although this may seemingly contradict exactly what I just said, there was some time later that I was so frustrated with Evee, that I basically just rode Vintage, all the time, and without instruction. Although this was years later, after a whole bunch of lessons to make Vintage a decent citizen. She was fairly good at this point, as indicated by my falling to riding ratio dramatically dropping.

But even though I went a few years with no lessons, I can’t stop anymore. I am now officially addicted, and I need lessons to survive. If I have a horse, lessons are an accepted cost that go with it. But this post isn’t about stopping. The problem I am now facing, is that I have become so reliant on my trainer standing there, literally telling me how to ride, that I have trouble figuring out to do when she’s not standing there. If she doesn’t tell me to sit up, I slouch down. If she doesn’t tell me to stay straight through the jump, I drift off to the neitherworld. It’s almost gotten to the point where she needs to tell me I should pull back to stop.

But looking on the positive side, if she tells me to jump the terrifying looking 2’6″ oxer, I just do it. Because she has evaluated the risk, decided it is acceptable, and indicated I must do it. So I do. My brain shuts off things like considering risk or having fear during a lesson. Does this happen to anyone else?! I think someone should look into this phenomenon, surely I can’t be the only one who turns into a robot when someone is there to think for me.

This became especially apparent this past week now that the weather has become nice. My arena is now usable, despite a river that formed through the middle, and now I’m finding time to ride every day. I even found time to avoid the canyon in my arena, and trailer to my trainer’s arena. But, once I’m mounted up, I run out of things to do. 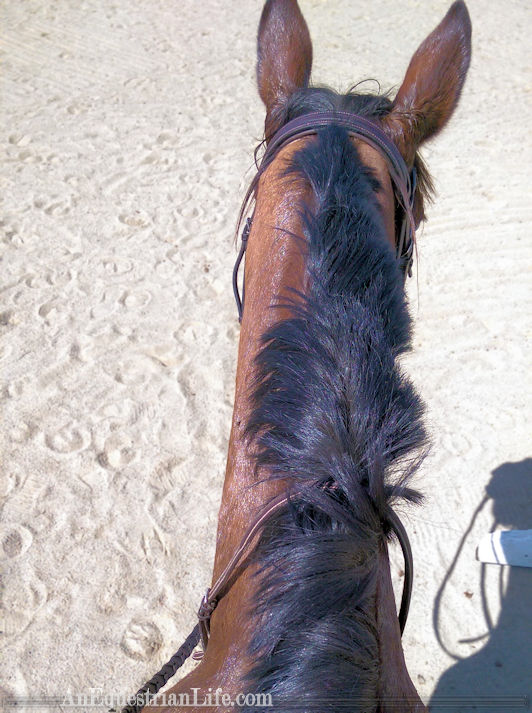 So… I manged to get on. Can someone please give me an instruction?

If I’m lucky, someone else shows up to ride, and I can just imitate what they are doing. Oh, you’re planning to do one tempi’s across the diagonal?! OMG me too!

So instead of standing there pretending I got a super important email that needs answering immediately, I’ve decided to figure out some things to work on during those moments when my trainer isn’t around to dictate my every move. Otherwise, I’m going to doing a whole lot of nothing, except for those one tempi’s that aren’t going to do themselves!

This is my go-to for everything. Especially since my arena isn’t that big, so I have a choice of going in a circle, or riding off the edge of a cliff (in retrospect, bad placement for an arena). Circles are good. Circles are the circles of life. Circles bring all that is good and wondrous together in one big, round, oval. Not purposefully of course, it’s just my circles look like eggs, hence why I’m still working on them.

Also, they really help Berry bend, and then she looks fantastic when she’s not on a circle (for at least a few strides). From my perspective anyway, people on the ground might have a different opinion…if they were watching. Which they aren’t!

The internet is surprisingly generous with dressage tests. Need a dressage test to practice? Oh, here’s some! And wait, there’s more! And yet, still more!

I may not pretend to do dressage on a regular basis anymore, but I think 97% of people agree, dressage is good for you and your horse. Get a dressage test, and practice it like you’re in front of a judge. Also, it is a good exercise in remembering things, which is also great for that concussion damaged brain all riders end up with.

I used to jump without my trainer. But I also used to be able to think for myself, and I’ve come to accept that things will never be like they were, so now I’m going to just put ground poles down in the shape of a course. Or just convert all my trainer’s jumps to ground poles, that way I don’t have to worry about distances. Setting distances would require thinking. Maybe later she can reset all her jumps, assuming she isn’t thrilled by my awesome ground pole course!

Practice like it’s a real course. Get those lead changes, sit up straight, stop letting her rush… all the things I remember from my lessons. 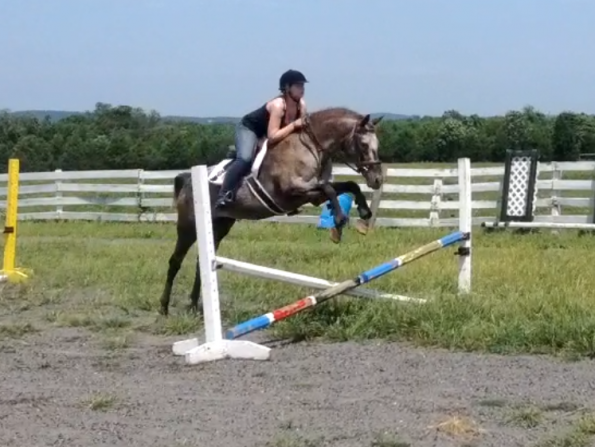 The long long ago, when I jumped without a trainer. Maybe I could jump without someone evaluating my every move, but I was still only on crossrails! Take that, old self!

Think About Last Show, and Practice Everything that went Terribly Wrong

For me, everything. It’s hard to practice “Don’t become so nervous and completely shut down,” though. But, thinking about what I could actually work on – Berry rushed in the flat classes, work her on the rail with a steady pace. Berry rushed over fences, practice slowing her down, and speeding her up (for the sole purpose of slowing her back down). Extending the canter, collecting the canter. Need to fit in those tricky distances! (Well, tricky for me. Probably not for anyone else, they are hunter courses after all.)

Distances are hard for me. Striding is hard for me. Sometimes, I just canter around, trying to get a feel for just how long Berry’s stride is. And then I head towards a jump, but slightly off course, that way I can just go by it, but I can try to imagine when Berry would actually jump the jump. One of these days this may translate to actually jumping the jump.

I’m a terribly unfit person. Berry is kind of fat, especially for a thoroughbred, although since she’s a thoroughbred, I have to pat myself on the back for that one. But I digress, we both need to get more fit. This leads me to canter her around in 2-point, for endless amounts of time. Bonus points if no stirrups, but I haven’t gotten to that point yet. The cliff at the edge of my arena, and the fact she keeps spooking at a viewing room she’s seen a million times makes me not quite ready for that yet. But soon…in my dream world, I am posting, 2-pointing, and jumping, all without stirrups. One day, I will make this a reality.

Well, I’m out of ideas. Hopefully doing all these things will make me less robot-y, and more think on-my-own-y.

Anyone else have suggestions for riding without an instructor?

Don’t forget! The winner of the Aztec Diamond Spring Giveaway is picked tomorrow! “Like” my page on facebook to enter!