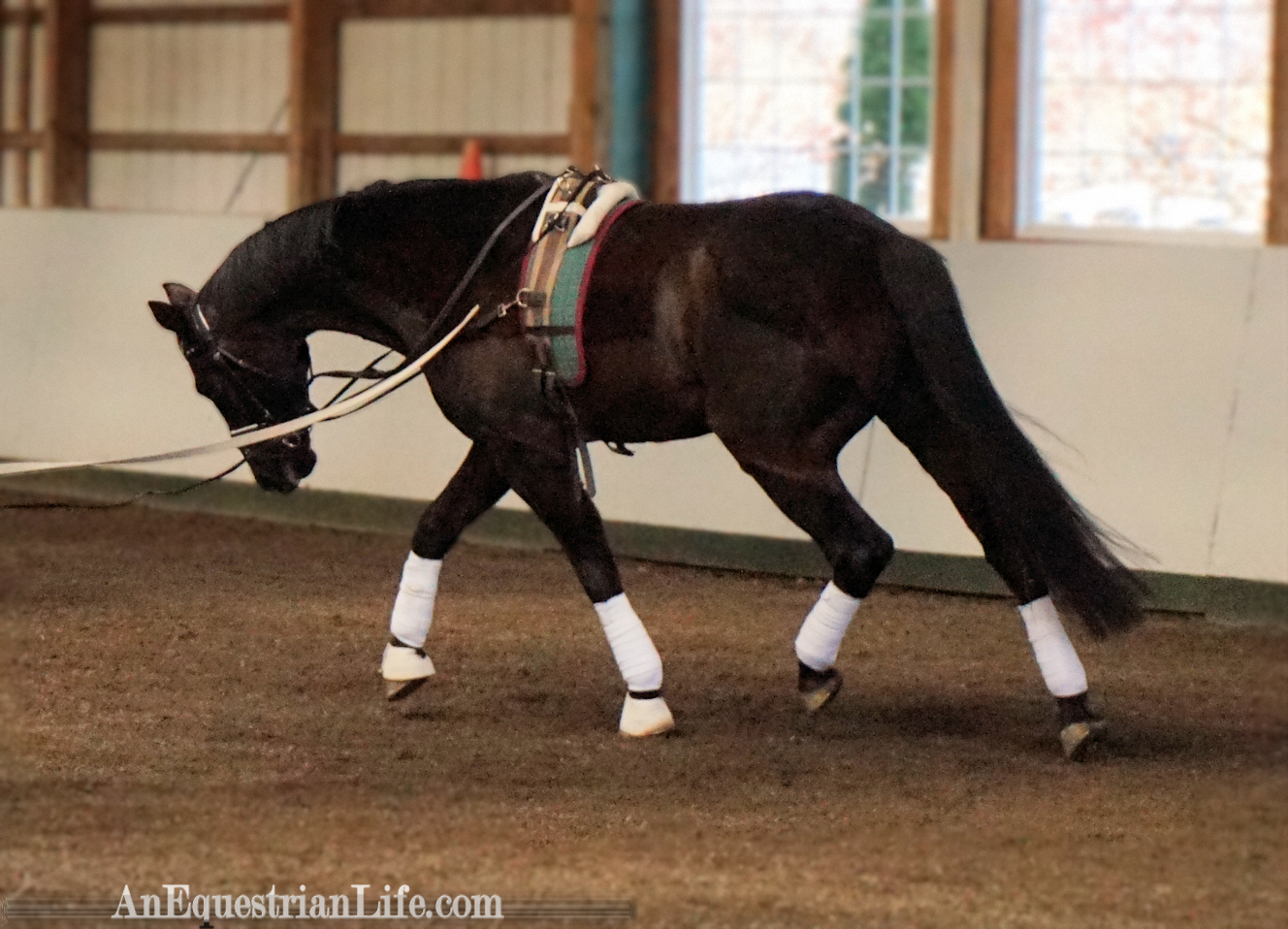 Continuing on with Mary Flood’s Clinic, we talked about working the horse next. The first part, Rider Position, is here.

I think the majority of us lunge our horses, or at least at some point lunged our horses. I learned just from watching my trainer lunge a few times, and then being handed a whip and line and being told to lunge. Basically, it’s not especially complicated. But, basic lunging is only the tip of the iceberg, and can be morphed into much, much more. It’s pretty neat how far along horses can be brought, without even getting in the saddle!

Unfortunately, my notes have vanished for this part of the clinic, so I had to base this off my memory. 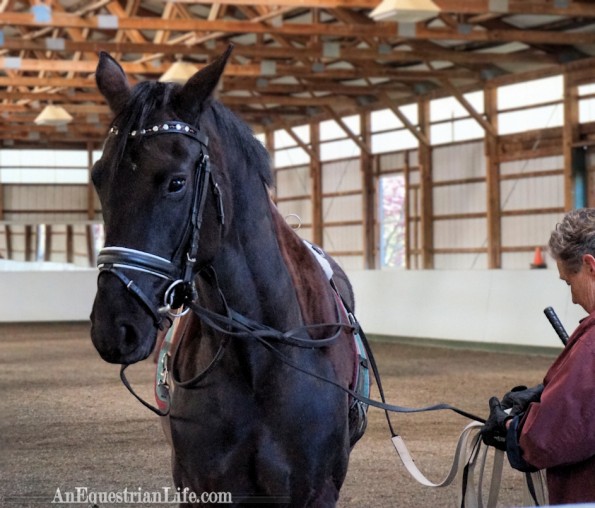 The First Victim: A super adorable, super gorgeous warmblood. Everyone was awed by this guy. 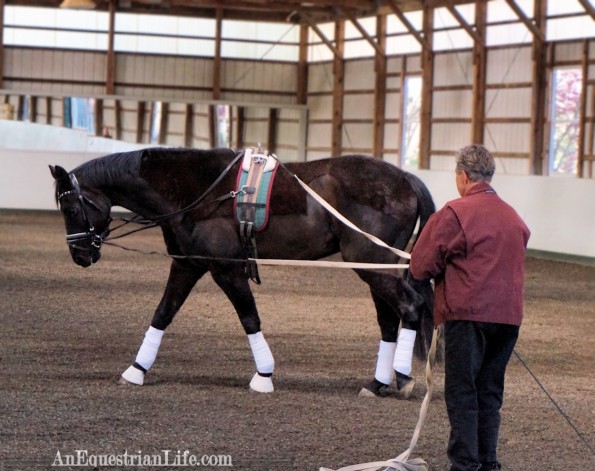 This handsome guy has a whole mess of lines on him, and it amounts to double lounging. No lunging system or kit, this is just a surcingle, and two long lines. 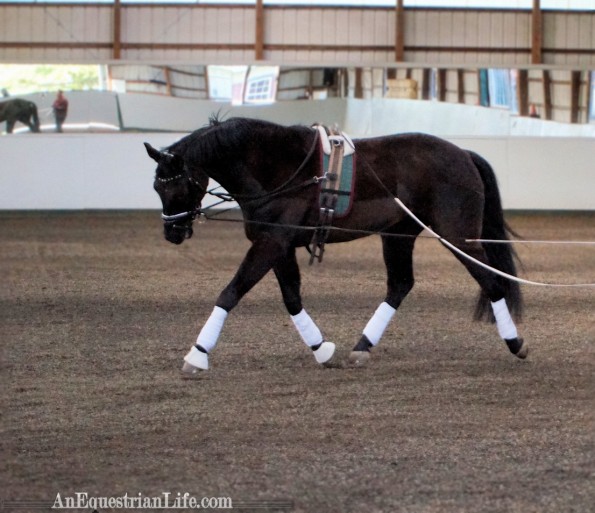 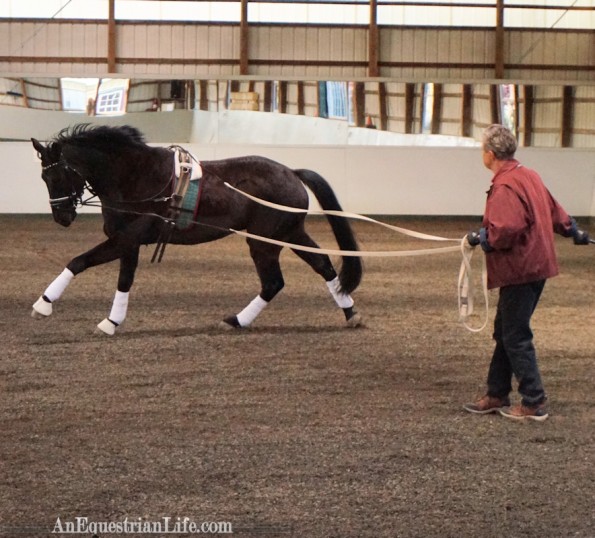 Mary showed us how the hook-up isn’t necessarily the same for every horse. You have to test running the lines different ways and see which way makes your horse happy. 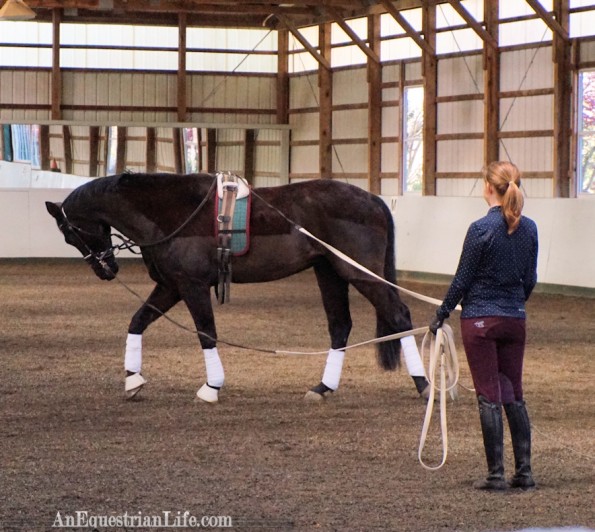 This expression means, “My face is being hauled to the outside.” 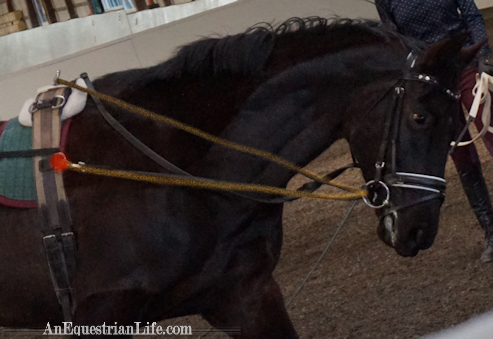 The yellow line shows how the outside rein is attached, with the red spot being the attachment point. This set up caused too much flexation to the outside, and was changed.

Even after the line was changed, the horse was still slightly counterbent to the outside. When asked, Mary said that because there is no inside leg to bend the horse, it will naturally be counterbend. However, that moved her right along into her next lesson, and that was teaching the horse to bend on the circle.

Mary switched up the tack by removing the surcingle, and putting on the caveson. She also pulled out her infamous bamboo stick. 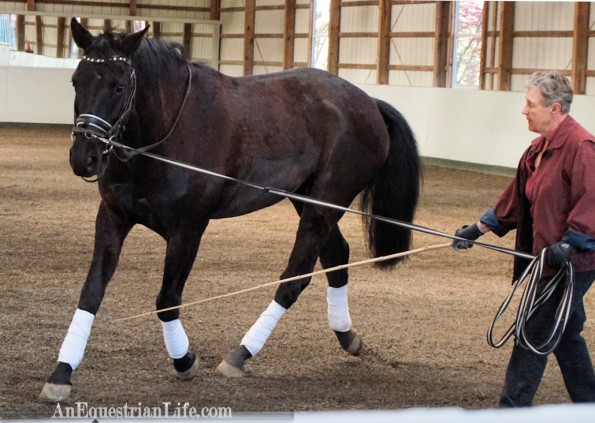 Nooo, not The Stick.

Because this horse was clearly well trained on this already, I’m going to switch from this horse over to one of the horse’s brought for Mary to work with. 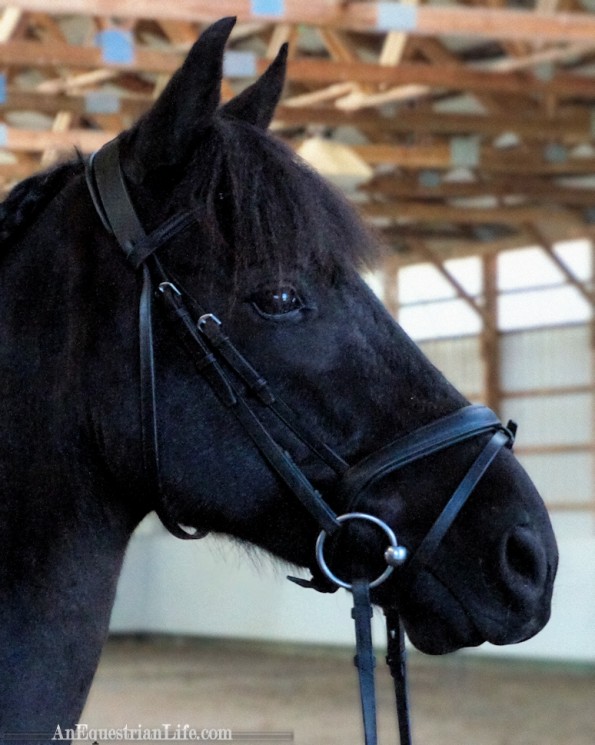 11 year old Morgan Gelding. Ideal, because at a casual glance, he looks like the other one.

The horse was lunged, using the bamboo stick as a surrogate whip, however, it was used as a spacer to keep the horse out. When the horse fell in, Mary used to the stick to poke the shoulder back out, and the horse learned very quickly that it needed to bent correctly. 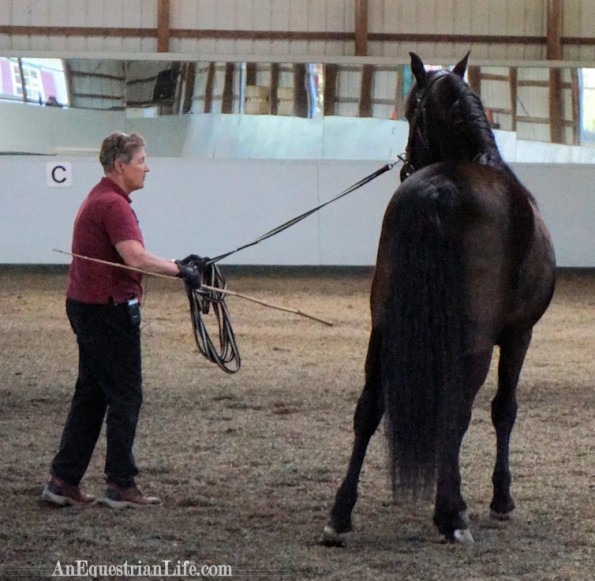 Mary emphasized remembering the training scale as well. Before the horse can bend correctly, it needs to be relaxed. When the owner was doing this exercise, Mary reminded her to ask the horse to lower his head first, before sending him out on the circle to work on the bend.

She also showed us how the bamboo stick could be used to move the horse’s body, reminding us not to tolerate behaviors we don’t like. If it bothers us that our horse won’t stand to mount, that’s probably something we should work on!

She used it like a whip to encourage the horse to walk with us, or held up in front of the horse to create a wall to stop the horse. This horse wasn’t staying right with his handler, so Mary used the stick to keep him with her, in both forward and reverse. 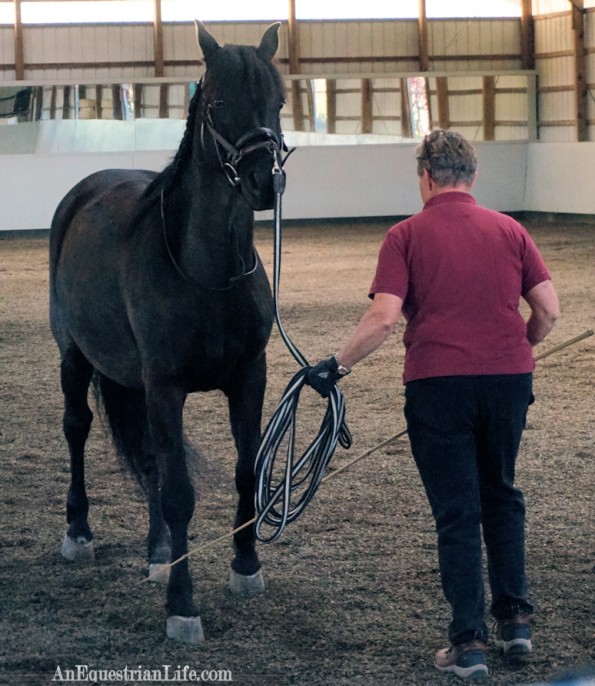 March those feet back!

Mary also demonstrated sideways movement with the stick. The stick was held up next to the horse as a wall, and the horse learned to step over. She also worked on getting him to square up when stopped, by tapping on the hocks. The gelding lifted those legs pretty quickly! She explained to us how controlling this movement translates into working on the piaffe later on in training. 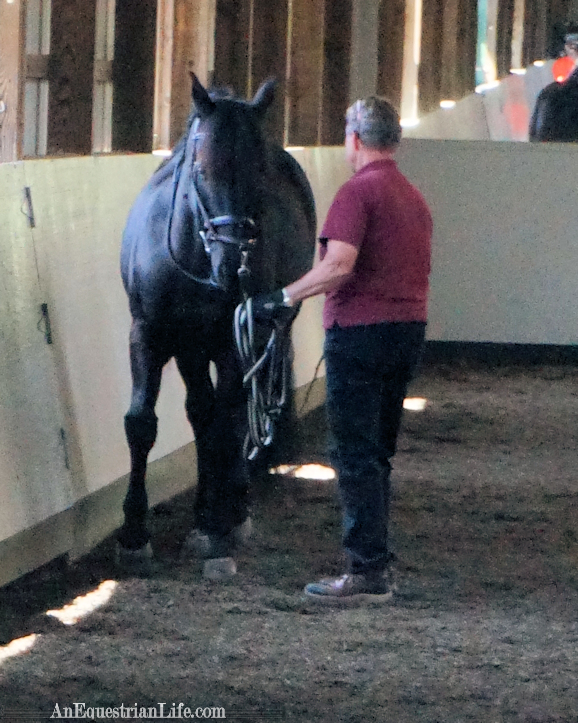 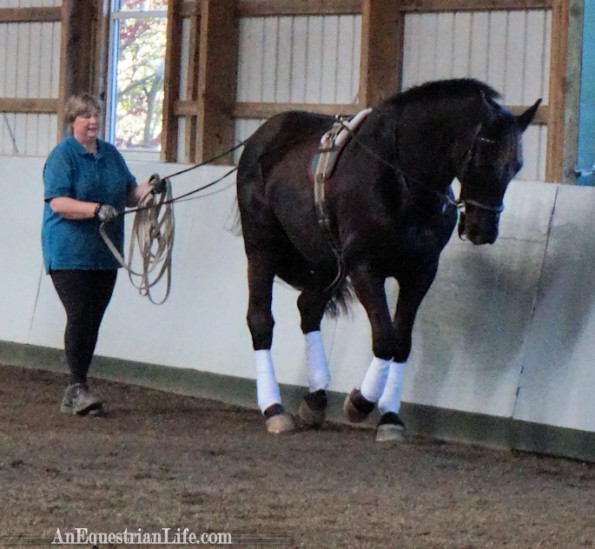 Next, Mary switched gears and showed us how versatile lunging can be. As it seemed to be difficult for a few us to understand (I admit guilt), she told us to plant our feet and stop letting the horse pull us all over the place. But at the same time, if wanted, we could work out way up and down the area. As in, when the horse comes around the long side, you walk with them for a few steps, and then let them continue past you and circle again, and next time they come around, you walk with them again. In other words, in an organized fashion, not, “I’m being dragged all over by my crazy horse,” fashion. 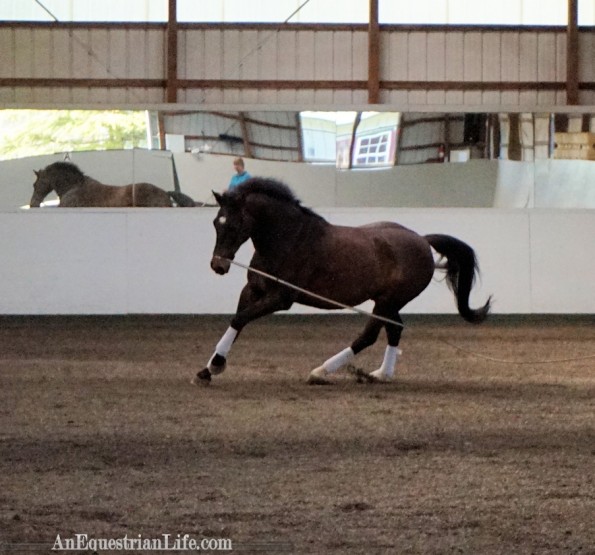 We all watched the FEI Schoolmaster being lunged up and down the arena, and then over ground poles. Someone asked if the poles needed to be curved for the circle, and Mary said with a chuckle, “No, they’ll figure it out.”

Mary told us she likes to build strength up over poles, and raised the poles up for us to see. 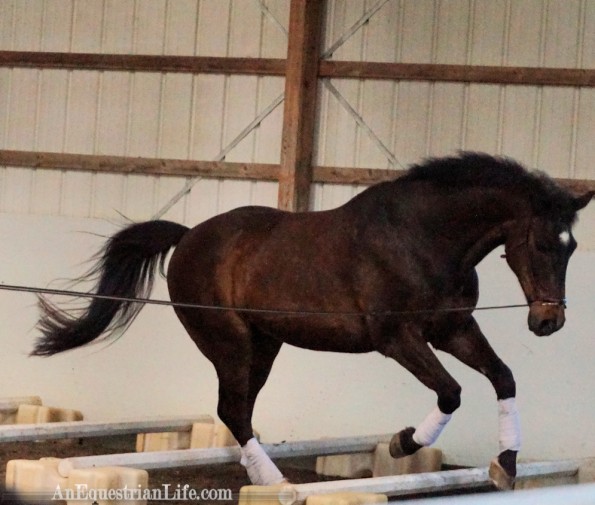 When the horse doesn’t quite understand, like in this instance, Mary told us just to make it easier for him to sort out. In this instance, one side of each of the poles were dropped, and he was sent through it again. He got it then, so the poles came back up. 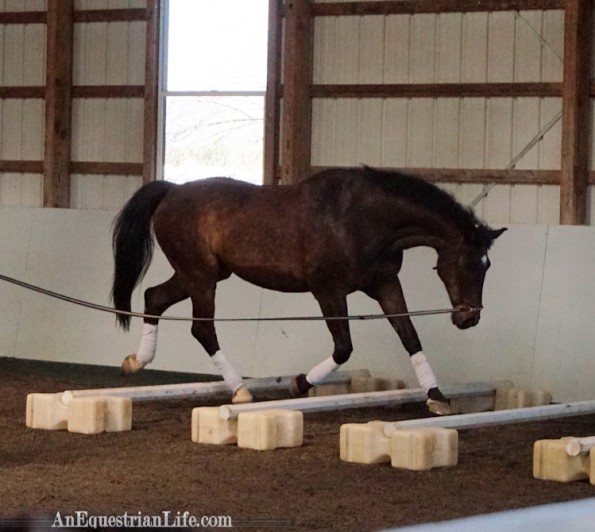 Mary was very pleased with his form handling the poles and said this is ideal, and a great start to working with a green horse.

As the clinic went on, I was wishing that I had opted to bring a horse to be worked by Mary. I was really itching to test out what I was hearing!

I’m not the biggest fan ever of lunging, but I’ve always thought it had it’s place. After attending this clinic, I’m interested in progressing more, and hopefully making full use of what I can do with the horse. I think this will be really useful for working with Pony Man, especially since he’s a tiny (but mighty) pony, and my legs practically drag on the ground. I’m planning to bring Pony directly to Mary as soon as I can, and hopefully working with her directly will really imprint this all in my brain!

How often do you use lunging, double lunging or long-lining in your training program?