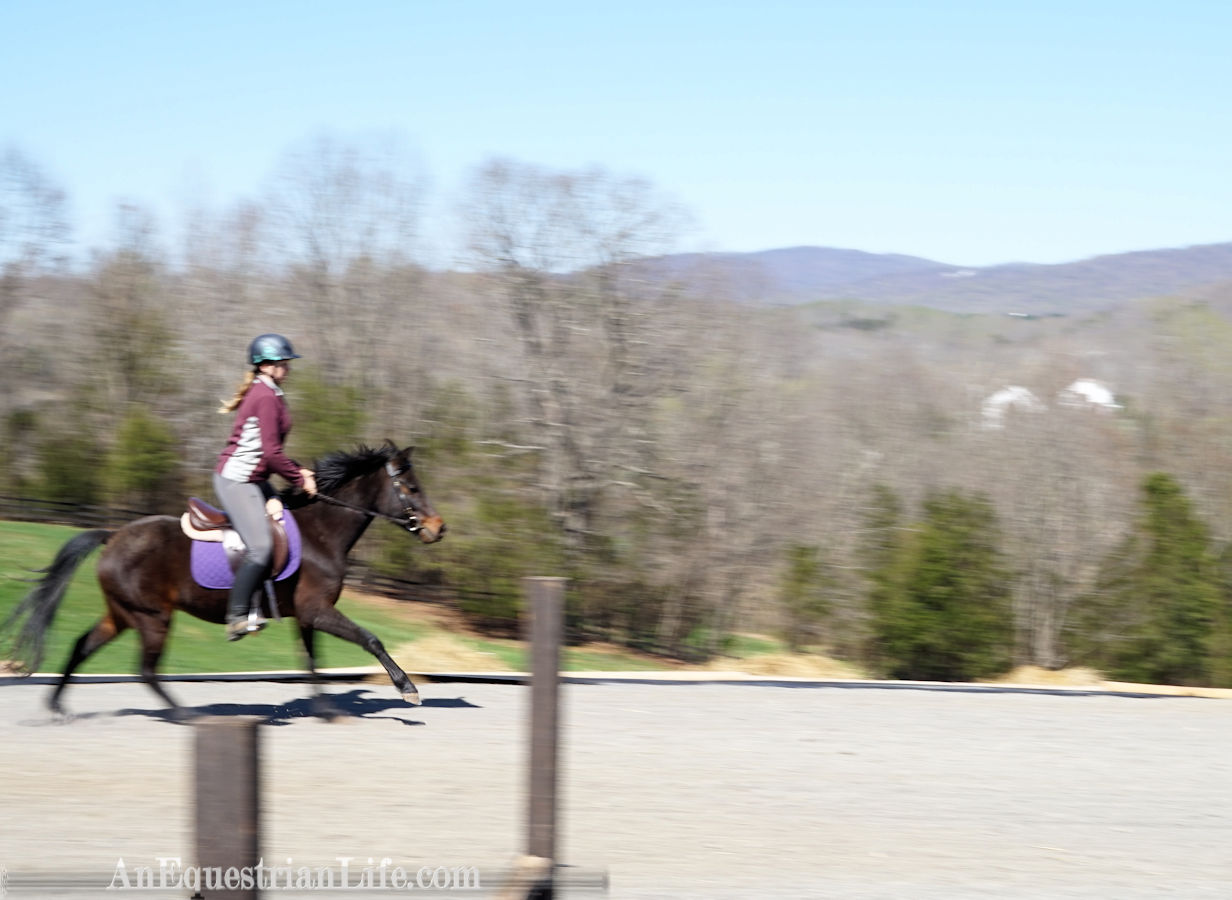 Pony Man is back from training. He was gone for a bit over 90 days, and it flew by. He left as a boy, and has returned a man. Now, he is ready to do great things. 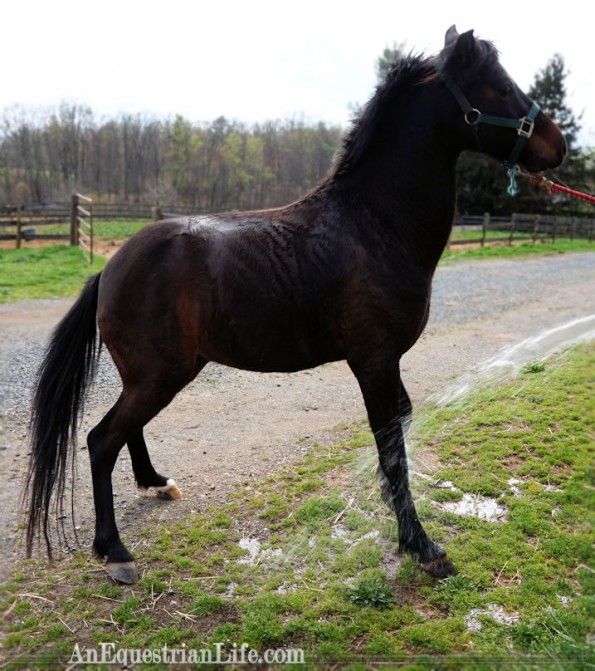 Some ponies are born great, some achieve greatness, and others have greatness thrust upon them. He might need a good push towards greatness.

He had quite the adventure at his trainer’s barn, and he did get to spend a little bit of time saying goodbye to the other horses. Particularly this one, and apparently they have a mutual dislike of each other. 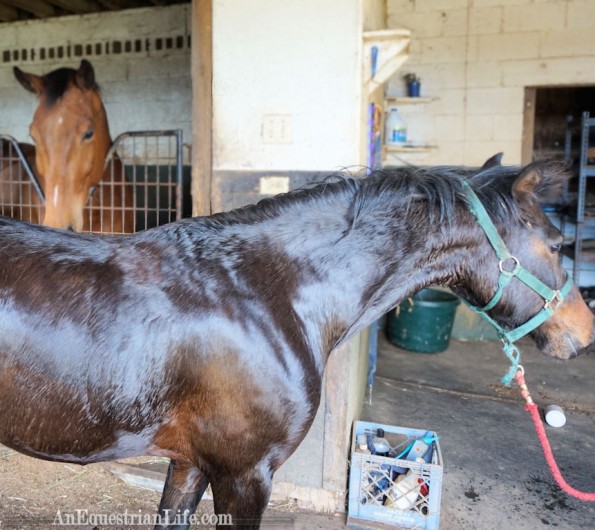 Moments before, they squealed at each other. Now, Pony feels way superior to the horse, after all, he’s out here, and that horse is still in its stall!

His trainer told me about one of his quirks – he’s a squealer. Apparently, he squeals like a little piggy a lot. If another horse gets close while he’s being ridden, he squeals. If the trainer is sitting on him teaching, and someone jumps near him, he squeals. Basically anything happens, he squeals.

Even though the pictures are out of order, we actually rode him before the bath and goodbyes. It was bittersweet. Imagine some sad love song while you look at the following: 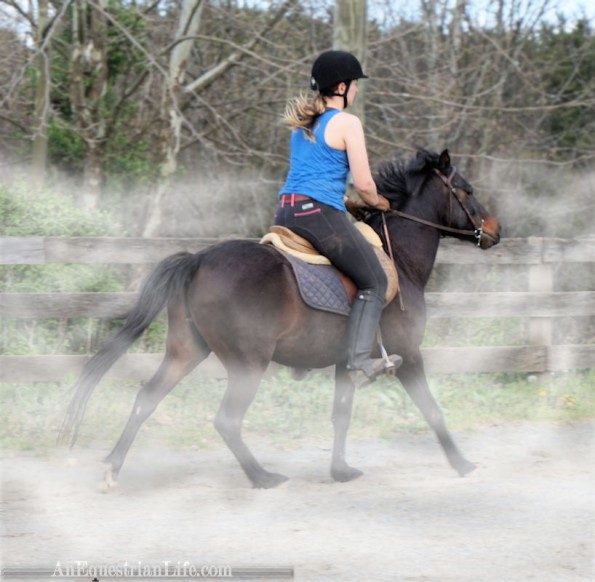 To complete the unicorn fantasy, a magical fog rolled in for the ride! 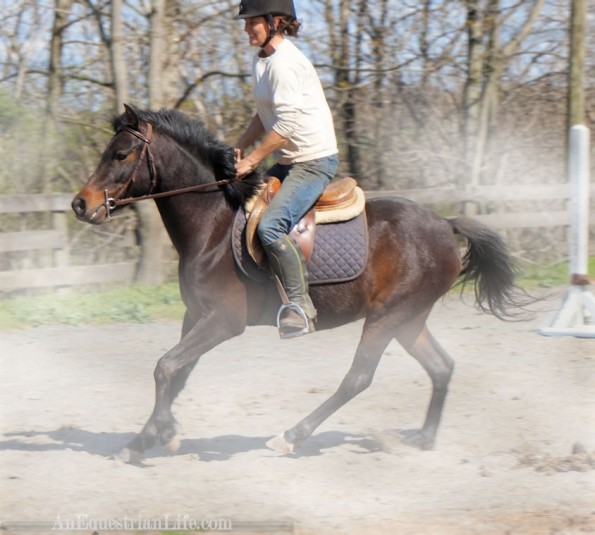 Til now, I always got by on my own… I never really cared until I met yooooou! 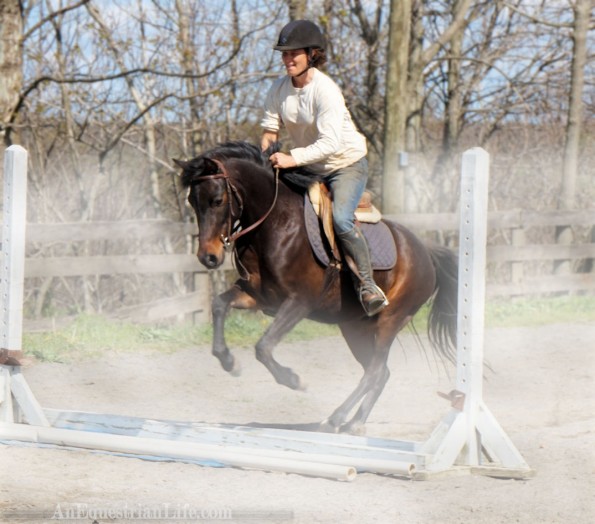 Super magical! Or maybe the jump was a ghost. Not quite sure.

Speaking of ghosts, we went for a hike around her huge property afterward, and checked out her abandoned shack. But, it turns out it was not so abandoned, and other than being spotlessly clean, had this creepiness inside of it. 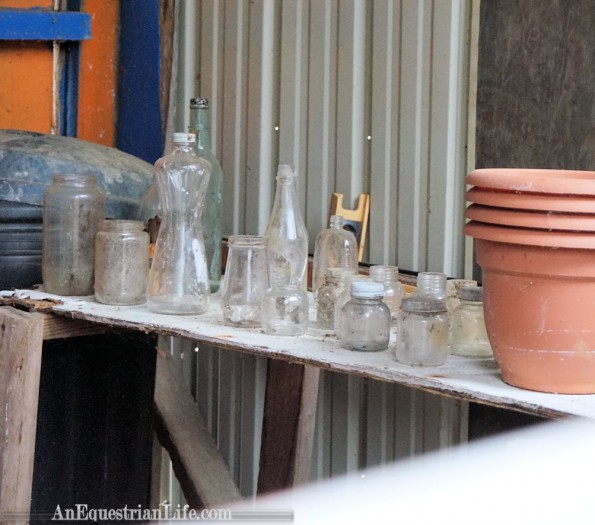 It had a super creepy vibe to it, although really, we think it’s being used by the neighbor’s as their kid’s playhouse. But moving along from that, it was time to head on home.

The mares were very interested in Pony when he got back. Vintage even started nickering at him when he got there, which was super cute. But when I got him in his paddock and released the mares, Vintage still decided she had to put him in his place. She gave him lots of mare glares, and wouldn’t even let Berry get near him for a while. 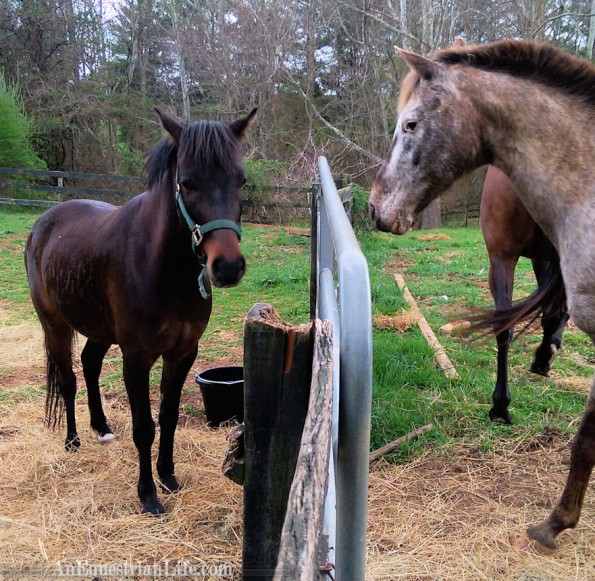 The face of a dumbfounded pony. “Why does everyone hate me!?”

Eventually Berry did get to him, and being his former best friend, I think they were pretty happy to see each other. They spent a few moments nuzzling each other over the fence, until Vintage decided she had seen enough and ran them both off. 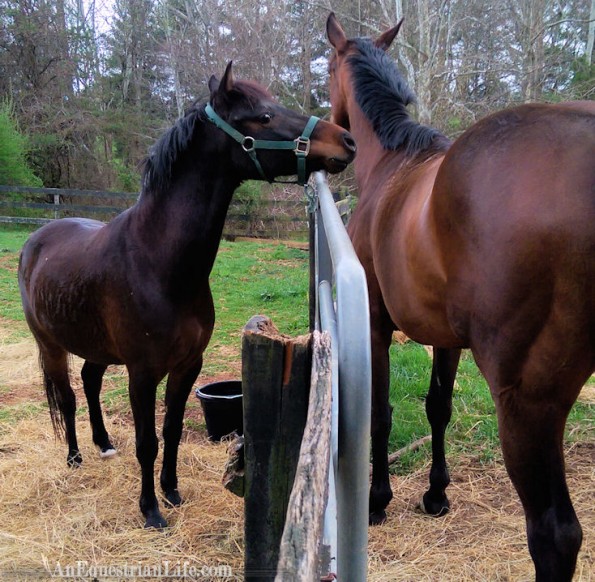 After giving him a day to settle in, it was time for the test. I had to ride him alone, without his trainer there to support me. I was nervous, especially as I expected him to be very spooky. He’s still a very cowardly pony.

I got on him, and he just stood there, like a good little pony. I started walking around, and he was a bit up, but surprisingly, didn’t spook at anything, including the flapping geotextile that I still haven’t cut off from when I built the arena. No magical fog appeared though. 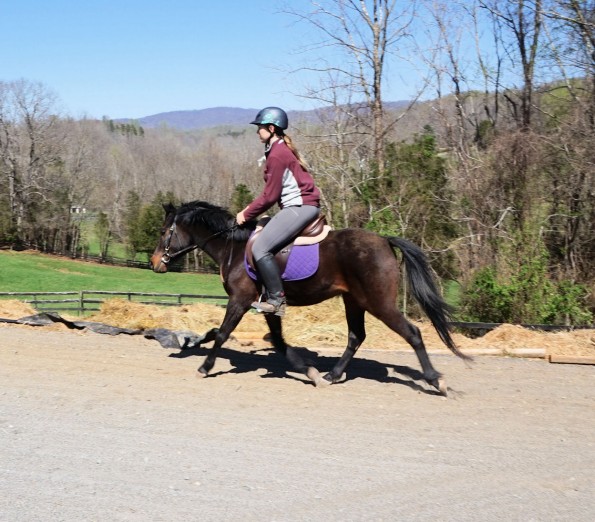 Even with the change of bit (as though I’m going to go buy a whole new bit! ha!), he was still a good little pony. His back is a bit slippery, and it’s easy to lose my balance, but he’s really quiet and obedient. He tries really hard. 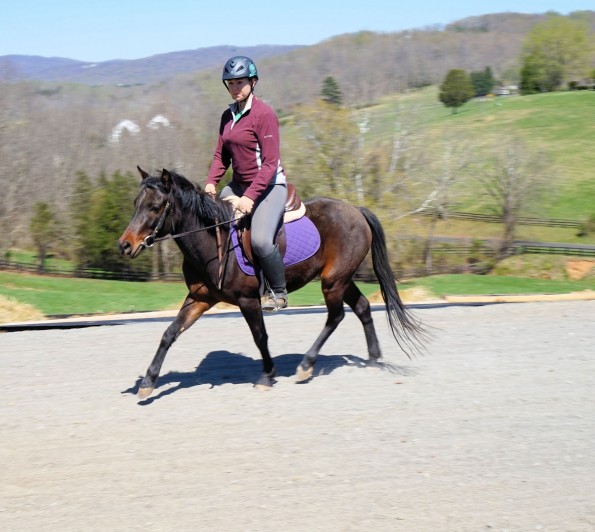 Going through the photos, I noticed I’m frequently sticking out my tongue, something I’ve never done before. I guess from the effort of staying upright on him?

Riding him is like spending time on the stairmaster. It requires so much dang leg!! At least this will make my leg super secure. And it will improve my balance, as I have to stay quiet on him, or I knock him over. 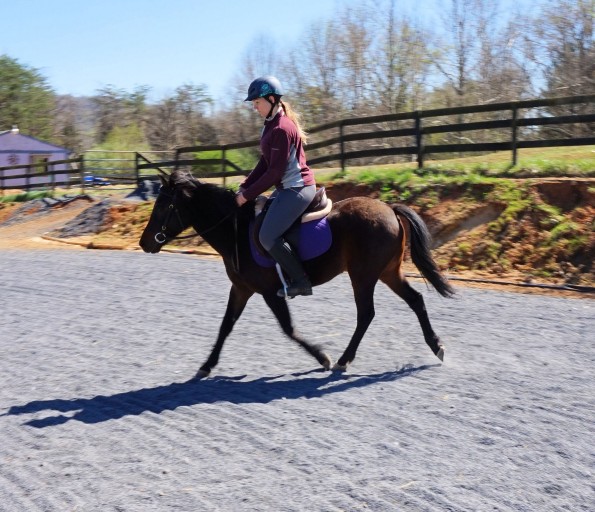 So far, so good. We’ve been walk/trot/canter, trotted a little crossrail, and started circles and figure 8s. He obviously already knew the w/t/c and jumps, not sure about the circle work. Since my arena is so small, I’m forced into lots and lots of circle work. With him being so little, and not used to me, I don’t want him to be making turns so sharp that he’ll lose his balance. So just starting gradually.

Overall, pretty neat to have my pony back and ridable! 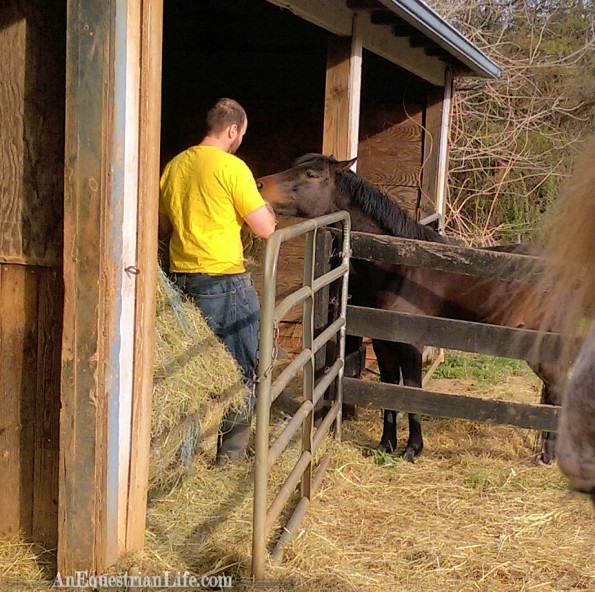 I also took this sneaky photo of Dave and the Pony bonding. Dave loves this little pony, in the way only a man can love a small pony.