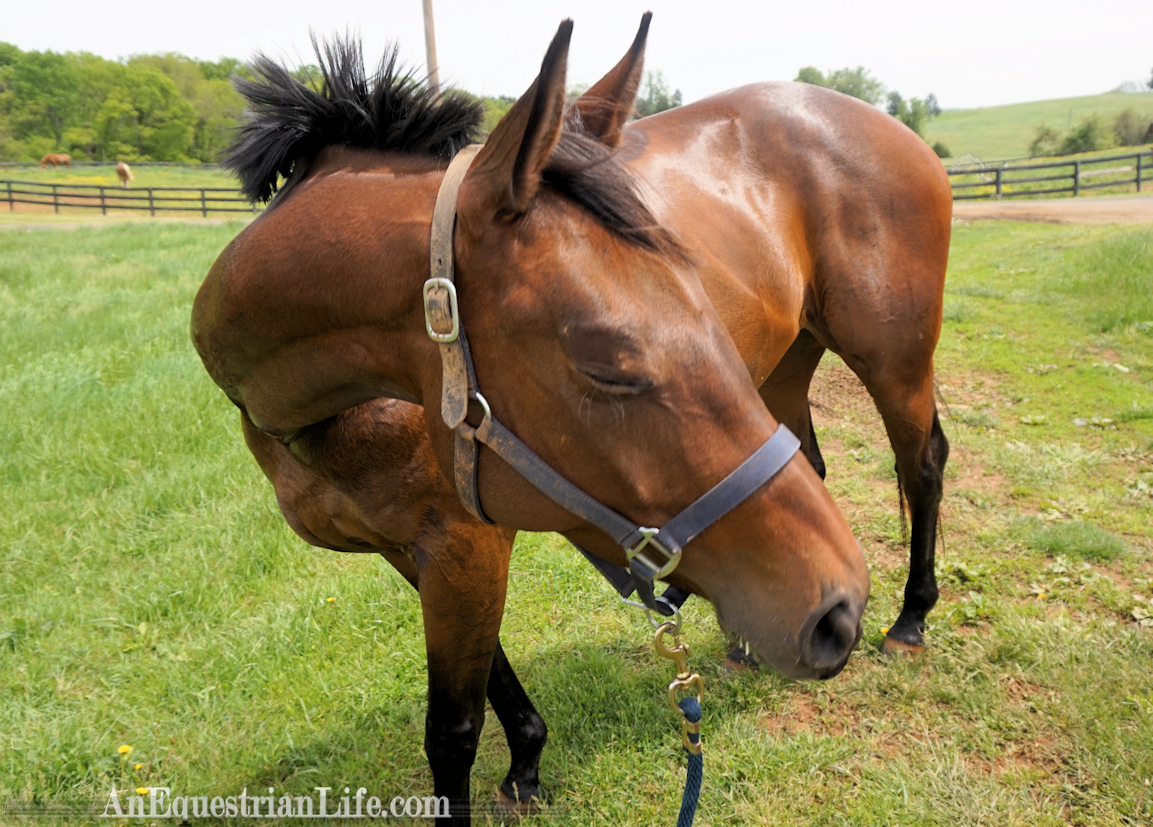 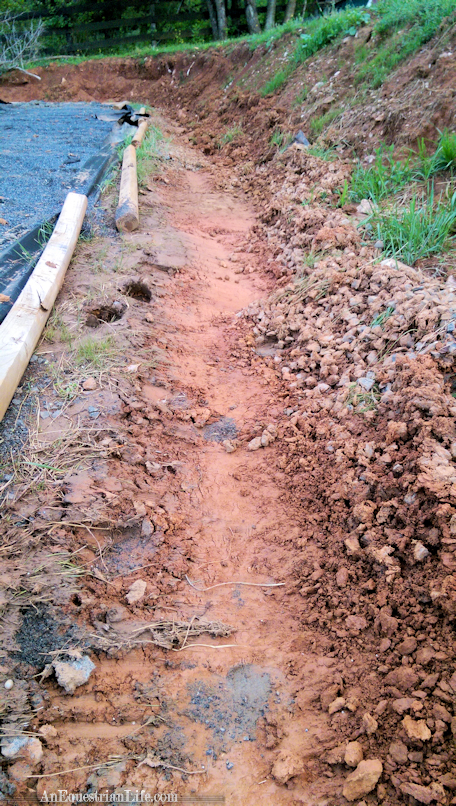 I may have made a gross, muddy mess of the edge of my arena, but the important thing is now there’s a nice ditch around my arena. Hopefully this will be enough to divert the abundance of rain we have coming our way. I don’t want to complain about the rain, as it is kind of essential for life, but dang it rain, can you just hold off for a bit? You are destroying my arena, keeping my horses mostly locked up except for when they are out destroying my pastures, and you have successfully destroyed my chances of riding at home. Ride in the rain, you might say? That’s a big negative, because it would rip up what’s left of my arena, rip up my pasture, and I can’t go ride on my neighbor’s land and rip up their fields because that would just be rude.

If my new drain works, I’ll be able to order more stone dust to replace what the rain washed away, and then my arena will be functional again. Hopefully it will work out, and we will have a happy ending.

But, to stop being a big Debbie downer, I can now go ride at my trainer’s, because my trailer has been fixed. 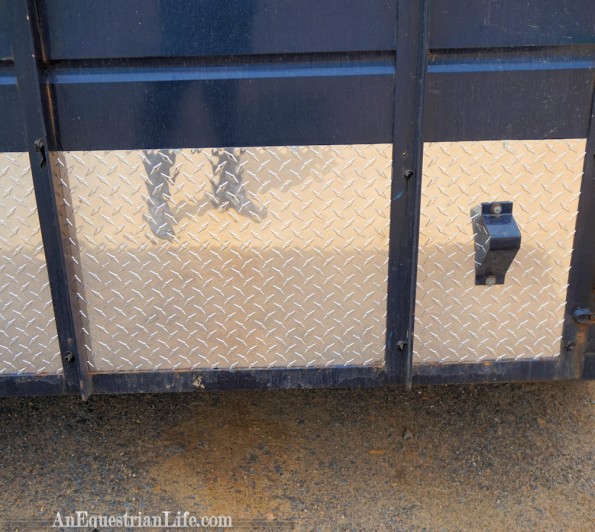 Now I’ve got some fancy chrome on the back.

My trailer is an ’85 Shoop. It is an old trailer, but it has a solid frame, and it’s still usable. I plan to keep this thing going as long as possible, but that does mean it will need repairs every now and again. This time, it got its ramp handles replaced, and the ramp was fixed. The ramp handles were an fairly easy fix, and new handles were just welded onto the old handles. I think that was $15 of the entire charge.

The big kahuna was getting this ramp fixed. I wish I had a before and after picture of the ramp, that would have shown it way better, but the ramp was rusting out along the bottom edge. As in, I could see the wood of the ramp poking out underneath. (I also learned that horse ramps have plywood, or at least old horse trailers do.) The plywood had gotten wet and was rotting, and that moisture was being held against the ramp causing it to rust out. It’s scary to think of, but as the ramp weakened, my horses could have stepped in the wrong spot, and their hooves would have gone right through. Yikes.

The rubber on the ramp was removed, the plywood underneath pulled out and replaced with new treated plywood, and then the rubber reattached. Then, on the outside, I got this sweet chrome trim to hide the ugly rusted out edge.

In case your wondering how much a repair like this costs (I know I’m always nosy about these kinds of things), It was approximately $495 for the ramp and the ramp handles to be fixed.

If you’re in the Northern Virginia area, and wondered where to get your trailer serviced, I highly recommend Taylor Boyz, in Midland, VA. They were recommended to me by my trainer and my neighbor, and I plan to go back to them for any other work/servicing my trailer needs.

Now that I have my trailer back, I obviously had to go test it out, so I went on down to my trainer’s for a lesson. 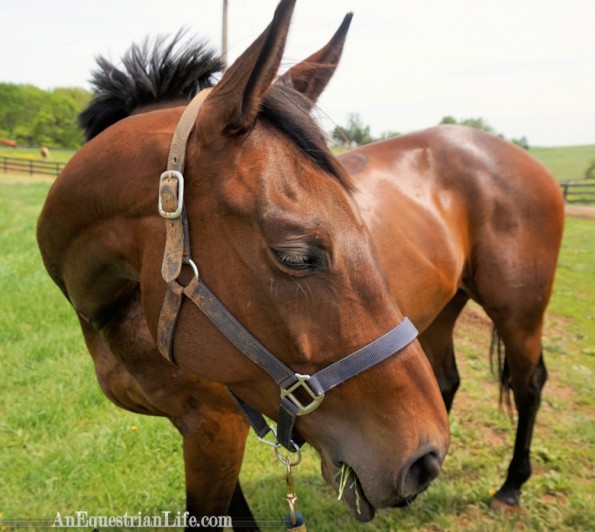 Obviously, we had the slow motion scene where my trainer and I spotted each other, and then ran at each other through a wild flower field while dramatic music swelled. Then she told me about the exciting things that had happened while I’ve been missing, like how she smashed her own storm door with a rock thrown by her lawn mower. It had exploded like a bomb went off. She really does tell me the sweetest things.

She also rode my friend’s horse, which I really would have wanted to see! My friend and I shared a lesson, and she told me about the lessons I missed, and I got to be impressed by how much her and her mare improved. She’s doing so well, I think I texted her like 10 times afterward telling her how great she’s doing. Eventually, she stopped responding. I don’t fault her for this.

But as to the actual lesson, Berry was a bit fresh, since I haven’t ridden her in over a week, but eventually she settled down. We were doing a lot of flatwork, and at first it was a bit lackluster. Then, my trainer walked up to me and literally pinched my shoulders together with her hand, in an effort to get my chest up, and to sit up straight. Surprisingly, this actually helped, and I remembered the pinch of her surprisingly strong fingers the rest of the ride. Berry became so light in the front, and I could feel her using herself so well. I had the best canter I’ve ever had on her, and I didn’t want it to ever stop. Then we jumped a bit, and it was thrilling to be doing that again. It might as well have been a dream, because everything just felt so nice. But Berry did clip one of the jumps, and she liked to drop her head and drag after the line, so there were a few reminders so get myself together. Overall though, I will remember the vice-like grip of those hands as a reminder to get it together.

I set up my next lesson with my trainer, and I mentioned it might get rained out. She looked me right in the eye and said, “If we didn’t ride in the rain, we would never get to ride.”

I guess I might be riding in the rain this week.