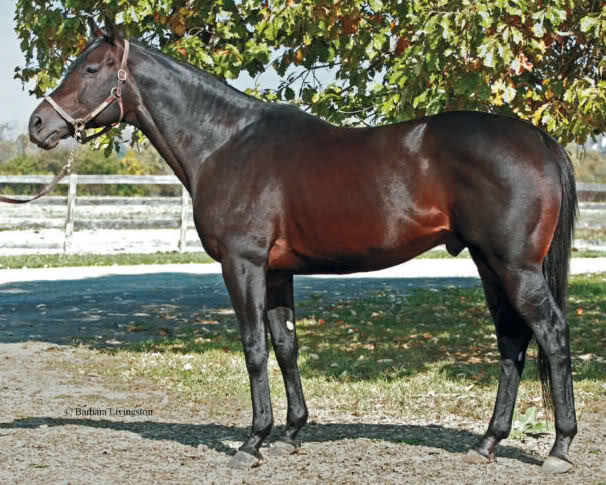 I was casually reading the forums today, when this peaked my interest. Say Florida Sandy was a New York bred racehorse that retired from racing in 2003, after earning $2,085,408. I do not know horse racing so I don’t know what any of his other stats mean, but while he was at stud, he stood for $2,500. According to whispers on the internet, he’s not at stud anymore, but the poor old gent is 22 years old now, so maybe he’s enjoying a well deserved retirement.

I don’t follow horse racing at all, and I don’t know much about sires, but I kept hearing similar things about this guy. This interests me because this handsome guy is Berry’s sire. As someone who knows nearly nothing about thoroughbred sires, I’m naturally interested in my own horse’s sire, and perhaps others are as well, maybe if they see a thoroughbred with SFS in its lines. Frankly, and I may be biased, but Berry is so awesome, I really feel like the line should be promoted.

Berry is a mostly quiet horse, and when I got her, she was completely quiet and seemingly super broke, despite being 2 years old. She has had green moments, but overall, she’s never been a difficult or mean horse. She’s just a sweetie.

I had never heard of SFS before I got Berry, and even though this sounds disrespectful now, I thought he was just a random nobody horse, didn’t matter, who cares, kind of thing. I thought she was just super quiet because she had good racehorse owners, although I’m sure that contributed to it to, and otherwise thought nothing of her bloodlines. It was probably about a year ago when I first saw someone bring up SFS, and I read with surprise that they looked for horses with this bloodline for event horses because they were big and brave. 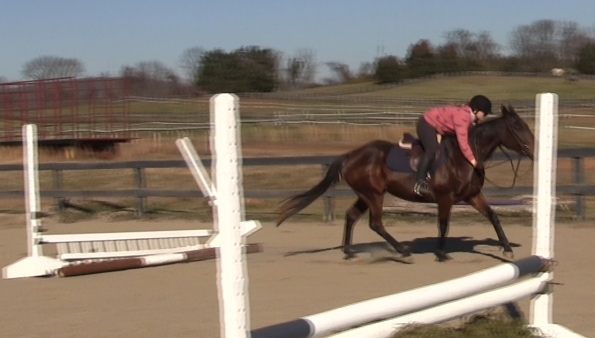 Bravely slinking away from the jump she just knocked over.

I’ve never thought of Berry as very big, especially compared to the horses I usually hang out with. Everyone wants one that’s 16hh+++, so usually I feel like the midget of the group. I’d roughly guess she’s about 15.3/MAYBE a hair under 16h, and I base this off the highly technical measure of standing next to her. She is kind of thick though, makes me look mostly proportionate to her, and I’m 5’7″.

She is brave though. I make fun of her all the time (it’s out of love!), but she really is. She’s hardly ever scared, and when she’s spooky, I think she’s just messing with me, because it amuses her. She definitely likes to amuse herself, and sometimes tosses stuff around and then looks over at me to see if I’m watching her. I’m planning to get her stall toys because she’s the kind that would definitely play with them.

I still can’t imagine her as an eventer though, because she is not careful with jumps at all. The only way I’d seriously go cross country is if I had a death wish. I’ll be lucky if I can get her to start respecting the jumps enough not to crash through the 2’6″ division. Although she did do that 2’9″ jump several times… so maybe all I need to do is always do my jumps in grid format. Singles she just has no time for.

“Sandy sires viable, long lived runners. For people who get attached and want to have a horse for a long time, these horses are going to do it. They just run for years.”

I’m not running racehorses, but I do want a long lasting, sound horse. Berry is prone to getting abscesses, but, at danger of incriminating myself, she just needs careful management, and not be left out in the rain. Rain, other than evilly washing out my arena, also evilly makes Berry get abscesses. She knows this though, and so much of the time she just wants to come inside to her dry stall. Hilariously:

Despite having the opportunity to spend a good part of the day outdoors, Say Florida Sandy prefers the comforts of the barn.

It’s easy enough to find racing information about SFS, but I’m really interested in any personal experiences people have had with his offspring. I’ve been searching, but they are hard to find. What do you think of SFS offspring as sporthorses? If you have experience with one, or have one of his offspring, or personal experience with one, comment below! I want to know if they are all like Berry – are they “born broke”? Are you able to event with yours? How big is yours?

If you’re proud of your SFS offspring, tell me about it! Let’s share our love of our big(ish) mostly plain bays!