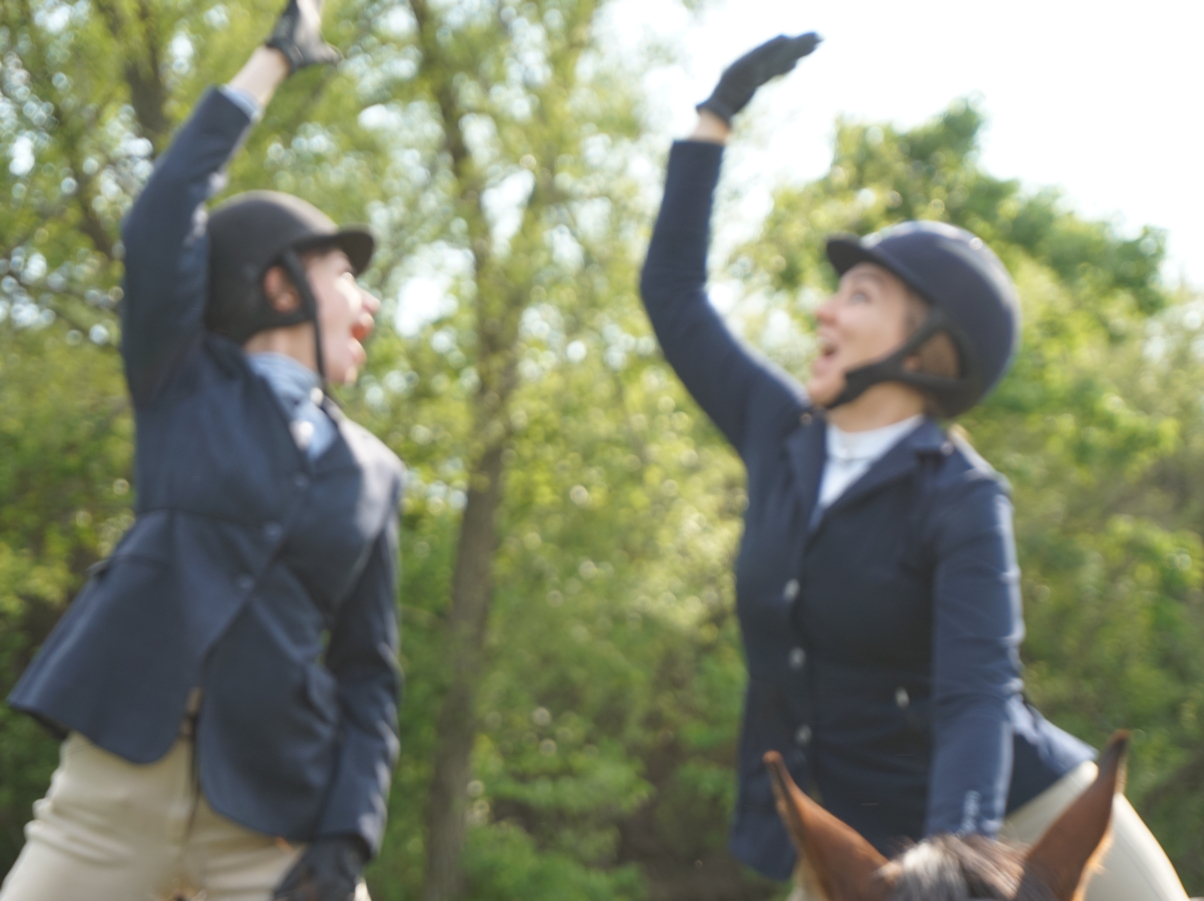 I went to another show! Yet another reason I’m so glad I have my trailer back. To make this show especially great, it was located about 15 minutes from my house. No more hour and a half trips for me (for now)!

It was cold. Way colder than it should be in May. Berry had also been in the last 16 hours in an attempt to keep her clean. This was a bad combination. Berry was super fresh, and high as a kite.

I got there early, and it was nice to just watch the ponies go for a while. 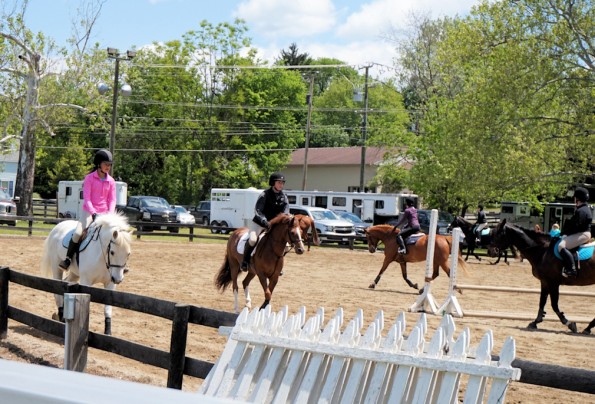 My trainer ran home to take care of her new born filly, so I was by myself for a while. I decided that I should just go ahead and warm up Berry, knowing that she was going to be a crazy animal. Which she was. I predicted that correctly.

I got her off the trailer, tacked her up with Dave’s help, and headed down to the warm up arena, where she stared at everything as though it was about to murder her.

I walked her around the warm-up ring for a while, trotted her around, cantered her around, and after a few head shake and tosses, magically, she began to calm down. Success! 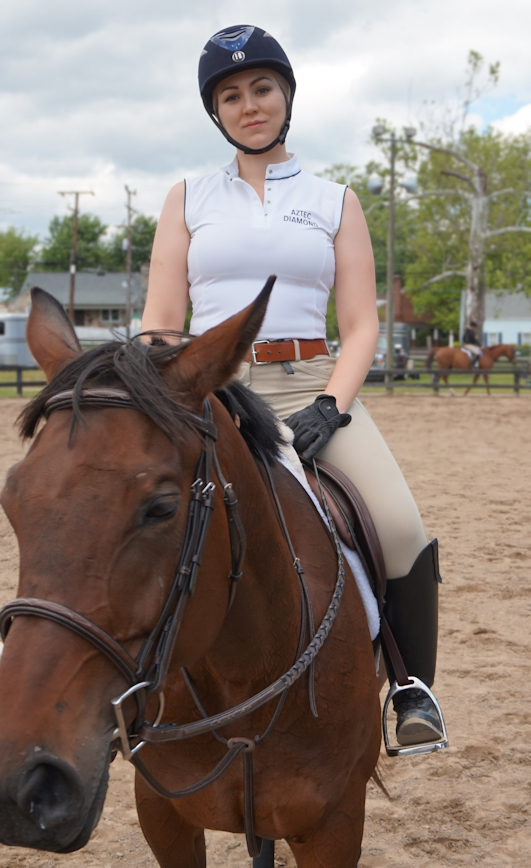 Even though it was cold, it was enough of a work-out that I was overheating afterward.

Then it was hang out time for a while. Schooling was supposed to be at 12. We didn’t get in to school until 2. I’ve come to accept that this is how it always will be. 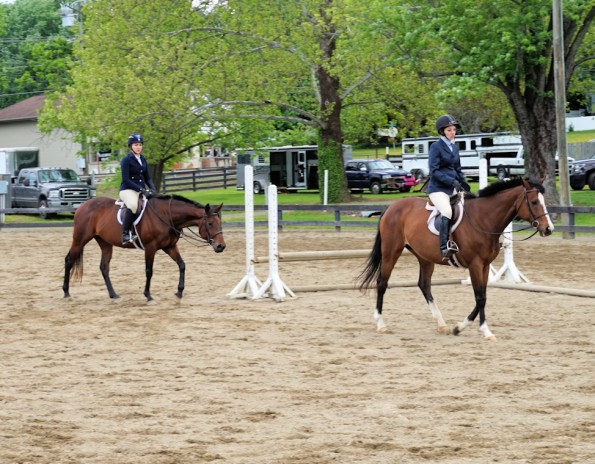 Eventually, schooling did happen. At first, Berry was nervous about the hedge, the grand stand, and just being in a new area. Then she calmed down, and was ready for some jumps. But, jumping with about 15 other people is kind of terrifying, and I don’t know that I will ever be able to do it. I almost had a head on collision twice, and had to yank Berry sideways to avoid it. Turns out, Berry holds a grudge, and she was not pleased about being treated this way. She started rushing the jumps, tossing her head, and having little fits. Once again, I just stood in the arena by my trainer, and waited for some people to leave. As the ring cleared, I managed to jump everything decently, and then we headed on out. My trainer said that Berry was still too fresh, and I needed to keep her moving. Luckily, I had four flat classes to do next. This is what happens when my trainer lets me pick my classes.

I have no media of this because Dave left the show grounds for a while.

It started with Equitation on the Flat. I picked Berry up, had her moving nicely, and she seemed quite pleased by this class. We got third. 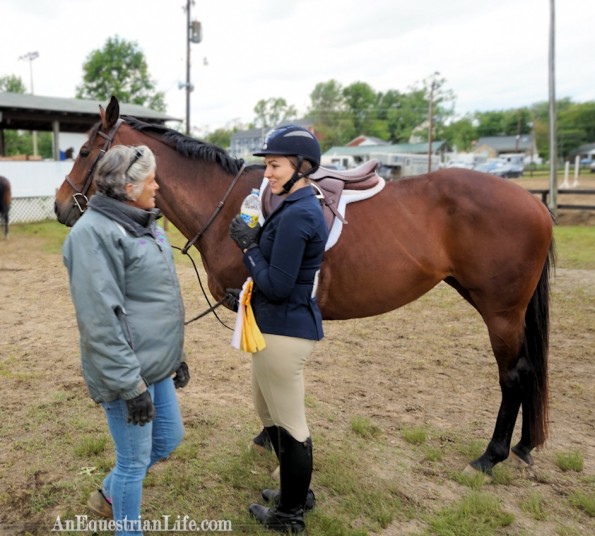 A discussion with my trainer about everything that went wrong. Also, time for a refreshing Brisk.

It was now time to go school in the warm up ring to get the jumping under control. It was pretty quiet and uneventful. 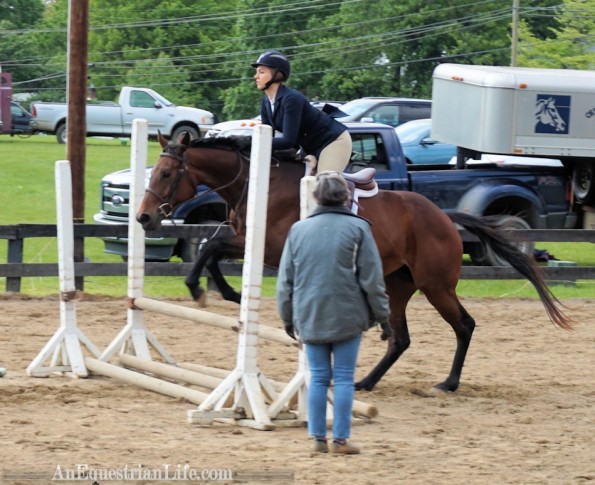 Finally, time for the over fences classes. My trainer made me do the slightly higher division, at 2’3″. I begged to go back in the maiden hunter division, but my trainer rubbed her hands together in glee and laughed.

Both classes went almost exactly the same. They started out fine, but at the far end of the arena, at the grandstand, Berry would throw a hissy fit. 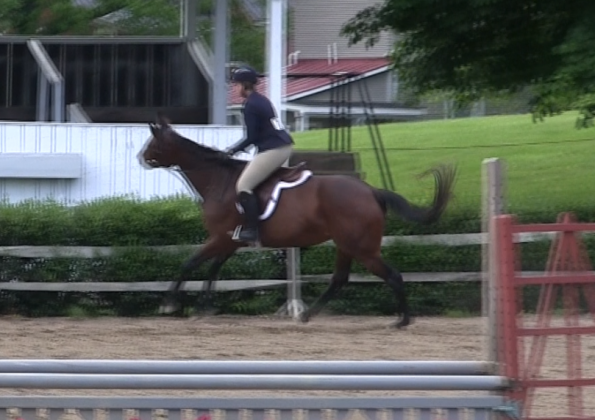 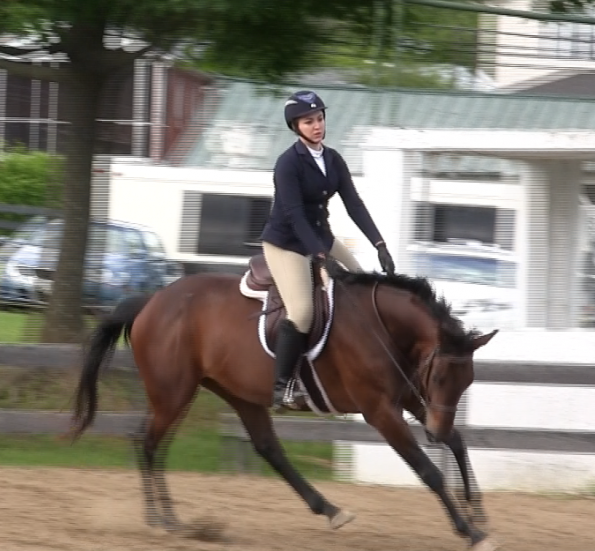 “I FIND THIS COURSE UNACCEPTABLE!!”

Once she realized we were heading down an outside line, she’d try to rush it. It felt like it was suddenly a race, and she’s flatten out, and just zoom forward. It was a little bit crazy. 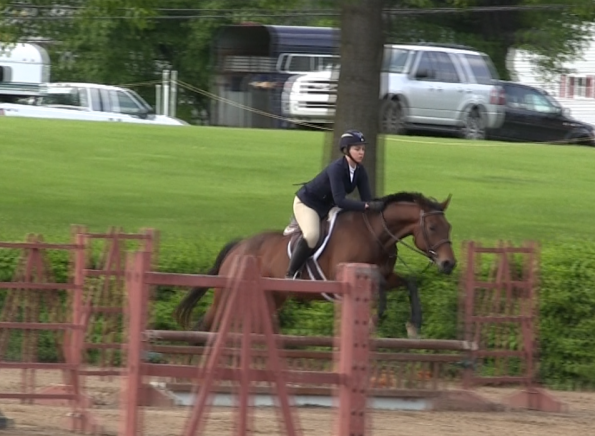 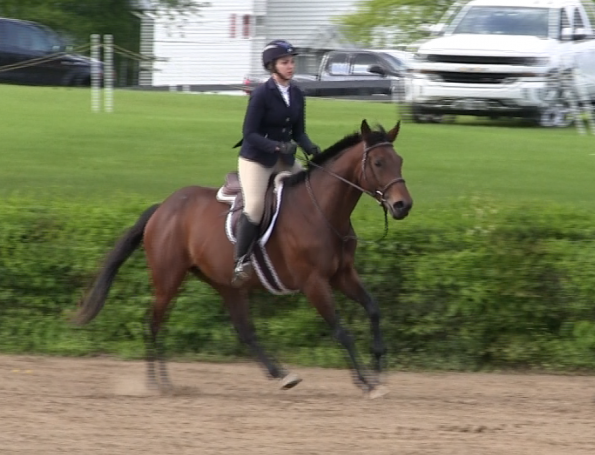 “Wait, this is a line?! TO THE END, AS QUICKLY AS POSSIBLE!”

I was thinking she had PTSD from the warm-up, but my trainer told me it’s because I keep dropping my hands and leaning forward.

I figured we wouldn’t place. And I was right. But that’s okay, it was still the highest we’ve competed, and she didn’t knock down any rails, even if she did tap one. I’m also not feeling intimidated, which is especially good. I still feel confident I could go back there, and try it again.

Next up was the undersaddle class for the division. Berry clearly knows the difference between fences and flat classes, because she had no problem calming down and being level headed. What the heck, horse. 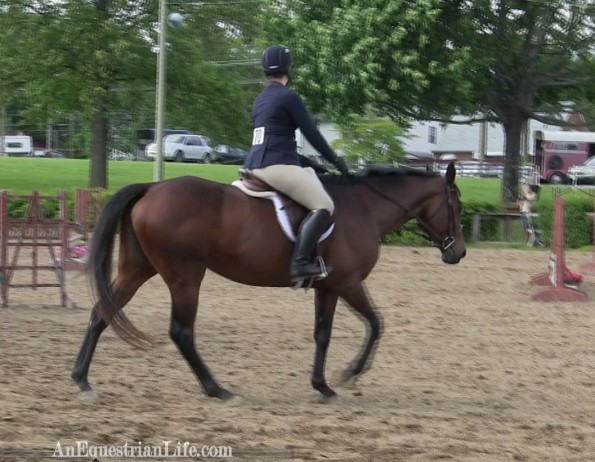 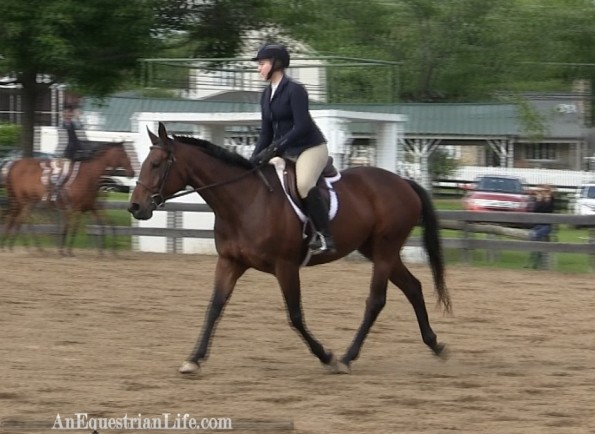 “Yes, trotting around is perfectly acceptable.” 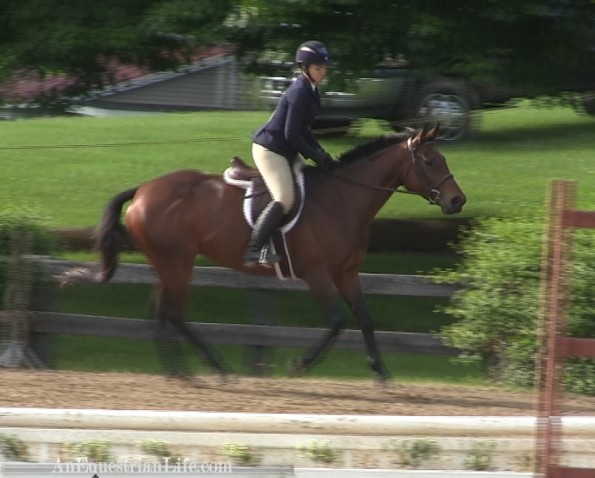 “Yes, I enjoy cantering, this is perfectly acceptable.”

We all lined up in the center, and since they were taking forever to figure out the winners, I started chatting with my buddy next to me. Apparently we were being way too loud, because our trainers started yelling at us, telling us we were still being judged, and also that I was slouching and to sit up straight. They never let us have any fun.

But, it turns out that talking and slouching did the trick, because I won the class! Wooooo, our first blue together!! 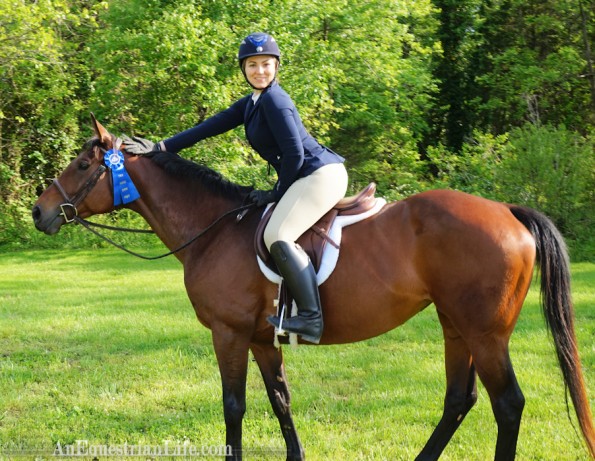 It was a nice change after doing so awful in the over fences classes. We definitely have the hang of trotting and cantering in a straight line down… now just to work on it with a bunch of speed bumps tossed in the way.

Overall, this was my favorite show yet, and I really want to finish out their series!