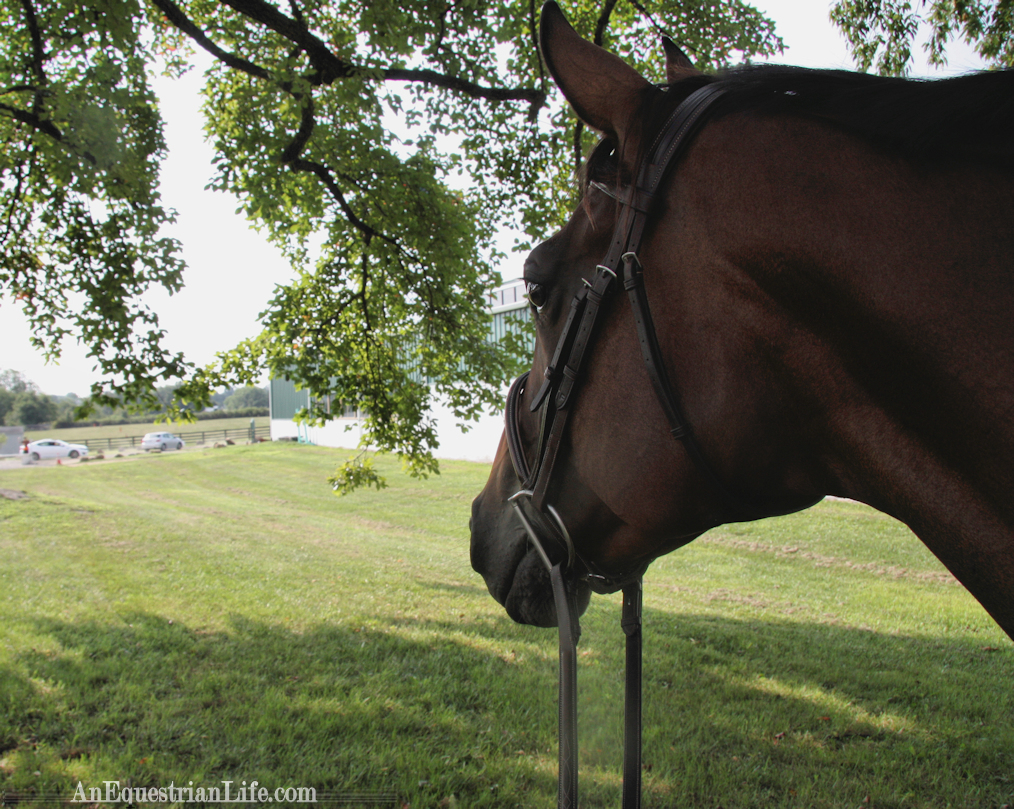 I took Berry to Frying Pan Park on Saturday for an open 4-H show. I took my very first riding lessons at Frying Pan Park when I was six years old, and I grew up coming to watch the shows there, always wanting to be the rider on the horse. 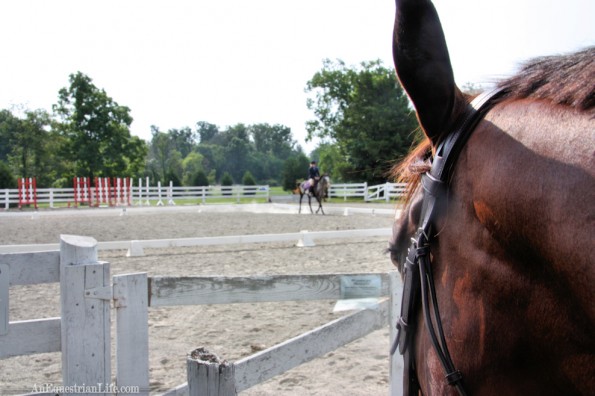 ‘Twas in this very arena, although I believe the fencing was black back then…

I finally fulfilled that childhood dream, although mostly in a half-fulfilled kind of way.

I arrived there nice and early, because my friend was scheduled to have her dressage test at 8am sharp. However, her show horse threw a shoe, which meant she had to pull out her runner up, who was not quite show ready. She arrived at the show, and asked if she could push back her time so she could have a beauty montage to morph her horse from wild mustang mode into civilized equine citizen form. The show organizer was perfectly happy to allow this.

She cleaned her up, and we got on to warm up. Berry was being suspiciously quiet. She was looking around, but her energy level hadn’t shot up into untrained horse territory. She was perfectly pleasant to walk, trot and canter around, even with tons of tented vendors, huge machinery, and goats. Because I am completely oblivious, I hadn’t noticed that this horse show coincided with a carnival. 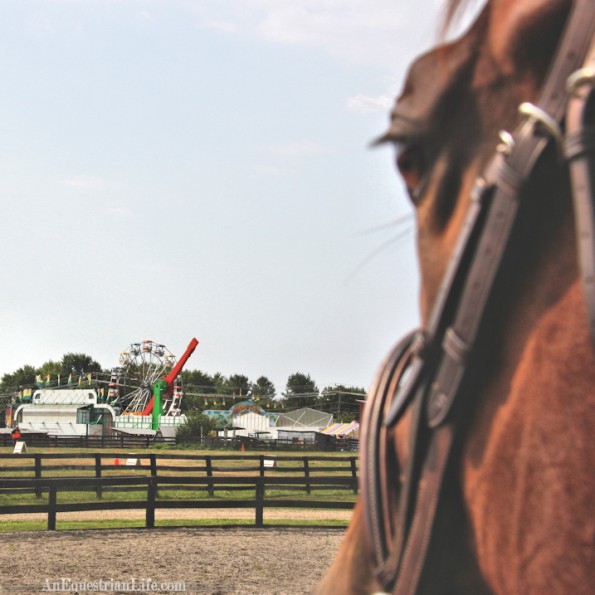 The carnival meant there were tons of spectators. Full families, with grandparents, wailing babies, and dogs on leashes all swarmed the barns and arena. It was kind of exciting to have that many spectators. I have never been so watched before.

My friend and I warmed up, and then we waited. We checked in with the steward, and the show was going to be starting late. At some point, I ended up separated from her, and I just wandered around with Berry. The western classes were still going, and I had no idea when my first class, Showmanship, would start. Eventually, I spotted my friend in the far arena getting ready to do her dressage test. Since they hadn’t given her a new time yet, she took it upon herself to walk up to the dressage judge and ask when she could go. The judge told her, “Now,” and off she went.

After her test, we hurried off to Showmanship, and while we waited, I tried to teach Berry how to back up. She does not like it, or cannot understand the concept. I eventually got her to very hesitantly move each foot back in slow motion, but it was pretty obvious Showmanship wasn’t going to be her strong point.

When we finally went in, she did a very obedient performance, doing the exact slow motion backing up we had just practiced. She trotted quietly up to her cone, but as soon as she halted, she suddenly realized we were in the most terrifying indoor she’d ever seen. 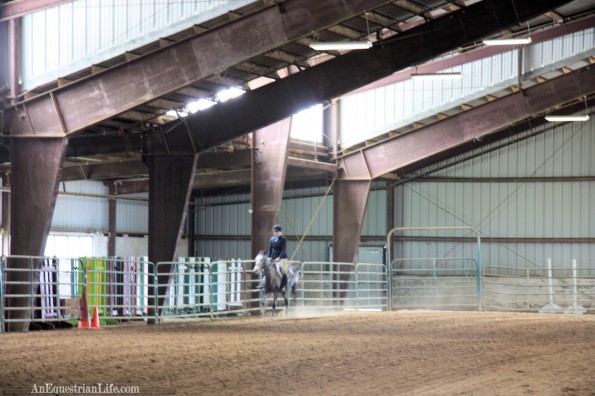 Indoor, as modeled by my friend.

It is huge, with panels marking off the arena. There’s space on all sides of the arena for storage, spectators, bleachers, bathrooms, judges stand, etc. Berry’s head went straight up, and her eyes bugged, which worked well for the judge’s inspection, because she didn’t move a single muscle while the judge circled. When we moved off again, she decided it wasn’t a big deal, and everything was fine again. We ended up placing 5th, which seems right because I think there were five people in the class.

Then came more waiting. They announced they had to have a break for the official opening of the carnival. I know this isn’t the show’s fault at all, but it was frustrating. The show had only been going for about 30 minutes, and then we had to have an hour break. There was another hour break scheduled as hour after that, too. To make it horrible, it was started to heat up, and Virginia’s famous horrible humidity showed up.

It was at that moment I decided to get a stall for the day. The stalls were free, we just had to supply bedding/water/food. Berry has never had the experience of being left in an unfamiliar stall, and as I walked away from her, her little desperate eyes staring at me through the bars, I felt like I was abandoning my child. When I came back later though, she was perfectly happy, munching away at hay, so it likely wasn’t that traumatic.

Once the break was finally over, it was time for the flat classes. My friend went first, winning both her classes (lucky her, being the one one in the class!), but I didn’t get to fully watch as I had to hurry up and mount up. And that’s where the trouble with socks started. 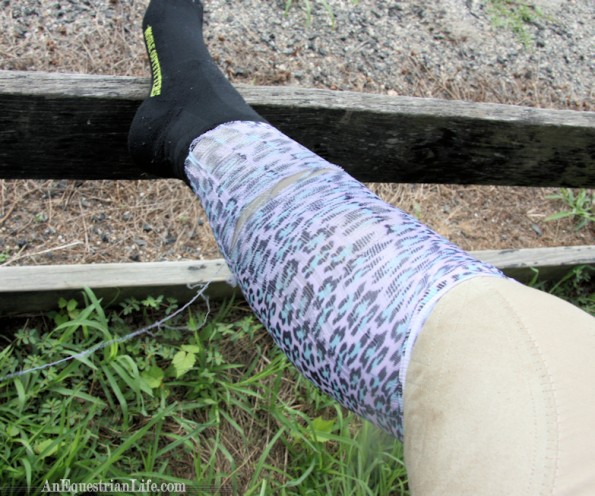 The zipper on my boot snagged the sock. I don’t know if it was the socks fault, or the boots fault, but this has never happened to me before. It ended up messing up the zipper on the boot, and I had a brief moment where I thought I completely killed my tall boots, moments before entering the ring. I ended up in the middle of the warmup ring, sitting on Berry, with one foot up on her neck, pulling off my sock and putting the boot on with no sock. I ended up with a huge nasty blister afterward, but it worked for the time I was in the ring.

After baking in the sun for ages (probably 10 minutes), they called us into the indoor. It was briefly a relief to get out of the sun, but it turned out the indoor was still super hot. It was an enormous oven.

The indoor was now packed with people. There were families pressed up against the rails, and crying babies everywhere. I don’t think Berry has ever encountered the mystical crying baby before, and she started doing the biggest, pranciest trot, while curled to the outside, her bug eyes fixed on these elusive creatures. Suddenly, everything in there, even things that were in there that she saw before, like the stored jumps, was a monster out to get her.

She was listening about 60% of the time. The other times, like when we were right in front of the judges’ booth, she suddenly became a bomb, and threw out some bucks, or did some sideways moves. We didn’t place in the first class.

I was so sweaty from the heat, and the effort needed to control her, I think I could have passed out while sitting in that line up. It was that moment I decided the next class was it, and I was done.

The next class she was mostly good (she doesn’t have the stamina for extended naughtiness), but she picked up the wrong lead, and when I switched it, she had a bucking fit, right in front of the judge’s booth. Shockingly, we still got a fifth.

Now I have two more pink ribbons to add to my collection of pink ribbons. One day, I’ll move past the pink… one day….

As I was sweltering hot, I was ready to go. Berry surprisingly seemed okay, but I made the executive decision for her. We went back to the barn, and she got a nice hosing.

Did I mention all the people there from the carnival? Because there were tons of people in the barn. There had been an announcement over the loudspeakers inviting people into the barns, and everyone was happy to come in. I think this is when Berry decided she wanted to be a celebrity horse.

She got hosed off in front of audience of about 40 people. Everyone thought she was hilarious as she mouthed the hose, and tried her tricks of getting me soaking wet. We went back to the stall, and a line formed of people who wanted to pet her. The children would creep forward timidly, she would put her big dipping wet face right into them, and they would squeal with laughter. She would rest her nose against them, and everyone stroked her face. I think she was in heaven.

It was really fun to share her with everyone. The kids were so cute, and the parents were so nice. Only one time did I get annoyed – There was a western saddle in my barn aisle, owned by my stall neighbor, and some parents walked up with their son, “Do you want to sit in the saddle?” I intervened and told them not to do that. It was expensive, and it also was not a toy. It’s mind boggling to me that someone would just walk up to someone else’s property and think it’s okay to play with it. I don’t walk up to your house and lay down in your bed!

It took me about 45 minutes to fully clean out my stall, all the time, thinking about how nice it would be to get out of the heat. (In my defense, it took so long because I brought no tools to clean up a stall). In my final moments, I put on Berry’s shipping boots, let out a sigh of relief, walked out of the barn…and discovered that the heat was dying off. It was cooler now, and they had just started up the classes again.

It was that moment that I really regretting packing up to leave, but I’d gone too far now. I was already committed to leaving.

So I missed out on my last two classes, which were both going to be my try at jumpers. But I did check out the course before I left, and it was basically a hunter course, but timed. So I don’t feel quite as bad. But I do feel sort of bad, because all I had to do was sit it out a little bit longer. Darn it, why am I such a weenie!?!