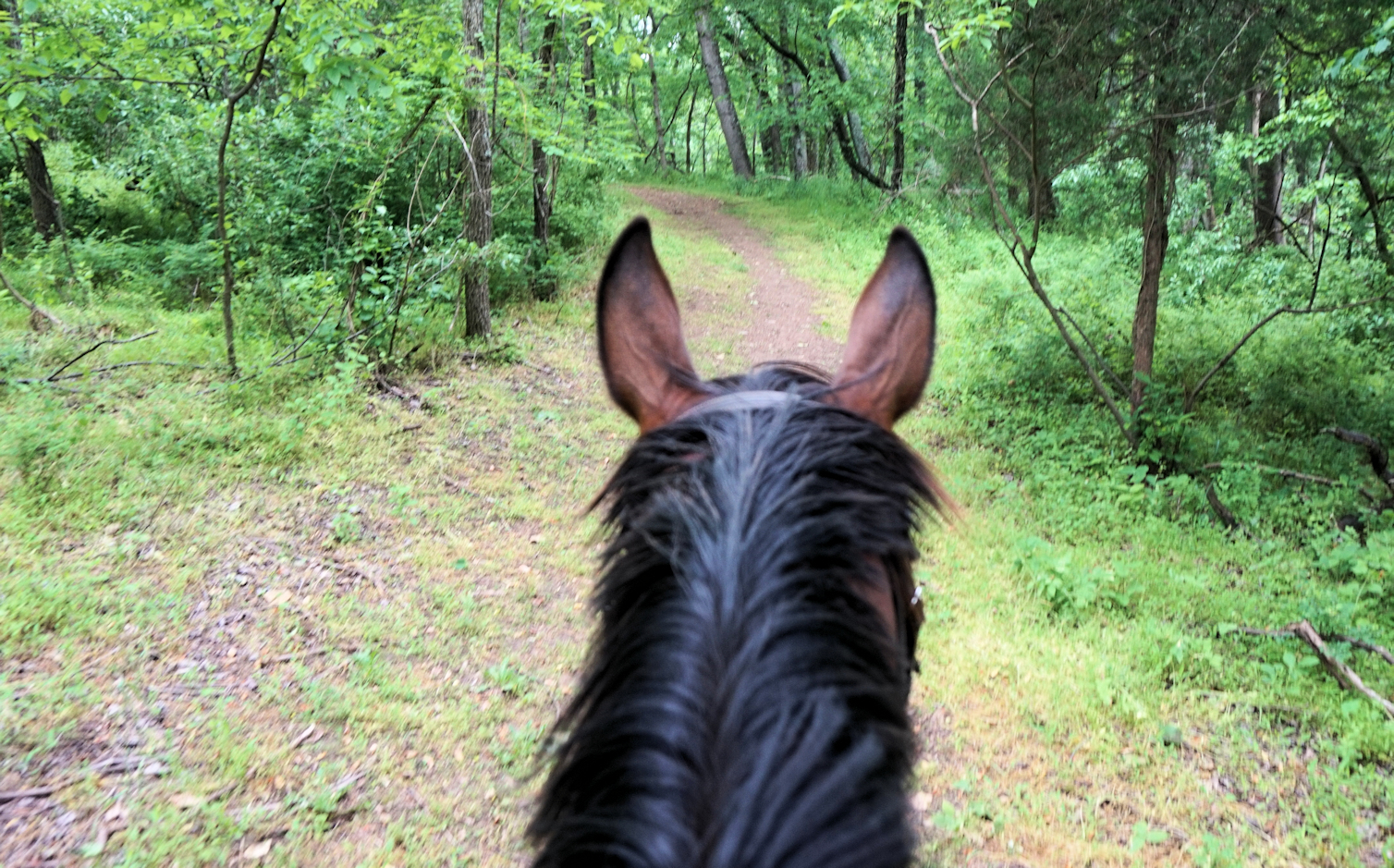 This last weekend was as action packed as any horse-obsessed person could want. It had all the excitement of a lesson, baby horses, moving hay, and a horse show! I need an extra day off to recover from this madness.

I was half-heartedly looking at new trainers. I say half-heartedly because I really like my trainer, both in personality, character, and overall horse knowledge. But, something just seemed off. I was looking for something next level. I was wondering if I was to throw my all into lessons and training, how fast could I improve? Having a good trainer is essential to improvement, and I want one that really pushes me and takes me to the next level.

I happened to see an ad for a trainer just outside of Middleburg, and I did some research. He had a student compete in the Upperville Internation Hunter Derby, and that is literally exactly the level I want to get to. I want to do hunter derbies, and handy hunter, and perhaps International Hunter Derby is a bit far-fetched and expensive to contemplate, but seriously, shoot for the maximum possible. TO THE EXTREME! Why just settle for, “eh, maybe something fun?” Why do I have a job, a farm, several horses, putting my blood sweat and tears into horses if I’m not shooting for the best I can be?

I jazzed myself up just writing that. Kind of makes me feel absurd for when I recap my TEENY TINY jumper show in a few days, but gotta start somewhere!

So, back to the trainer – He was offering a free day of lessons so people could try him out. That is one of the coolest things I’ve ever heard, and I was very interested. Risk free* trial!

*Did end up with physical ailment, but wouldn’t say that was anyone’s fault. 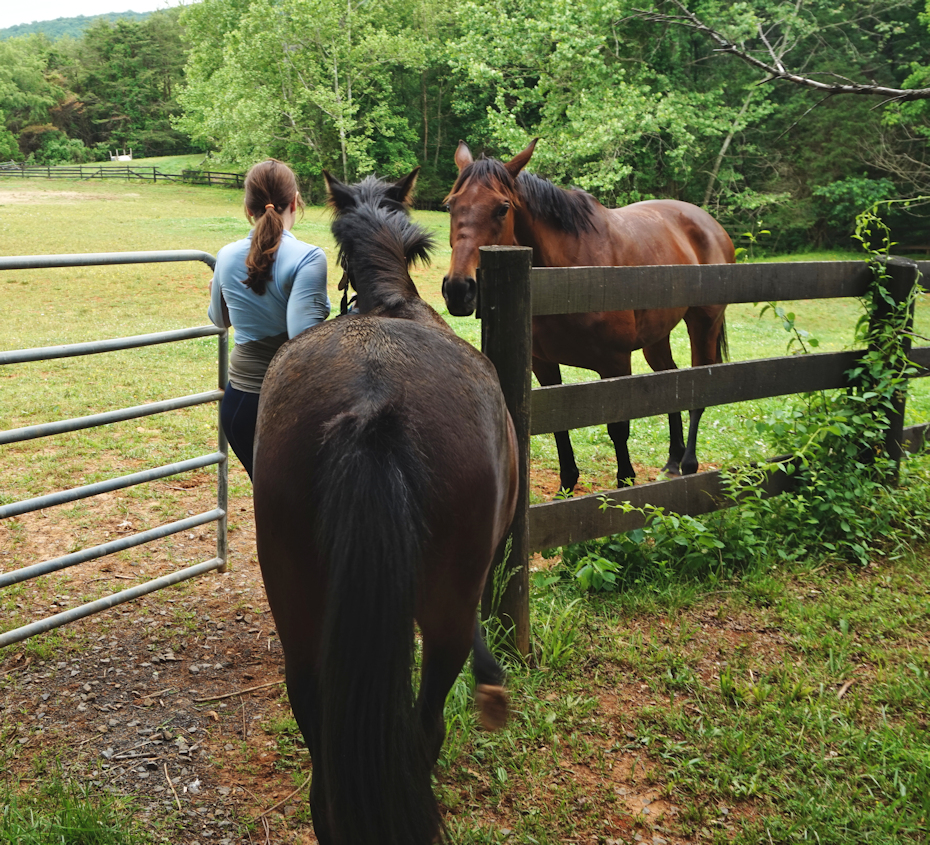 I forgot to take pictures, so here I am leading Pony back to his field after he made an unsuccessful, half-hearted attempt for freedom. He made it down the street, and then was too cowardly to actually leave, and he came back.

It was for trailer-ins only, but luckily that’s all I do anyway, so that was fine. I also figured, I have a pony, D’Arcy is a person, she can take a free lesson, too. So we both met there early Saturday morning, full of anticipation for our free lesson.

The farm is gorgeous! It has all the charm of the style of Middleburg farms, and it’s a huge plot of land, perfect for conditioning. They have a big outdoor, and a graded grass Grand Prix field. Unfortunately no indoor, but they do have an agreement to use someone else’s indoor, so that’s almost the same thing to me (actually, literally the same thing, trailering to one place is as easy as trailering to another.)

I pulled up to a nice easy turnaround for trailers (the little things are important to me!) and noticed a pretty little appaloosa in the barn. Everyone who appreciates the wonders of appaloosas is good in my book, so that was a definitely plus.

We met with the trainer, talked for a bit, and then headed up to the ring. He made us do lots of flatwork, and made me concentrate on getting Berry to use her hindquarters. Berry is built downhill so she doesn’t like to use herself naturally, it’s definitely a struggle. He used analogies that made sense to me (Your horse is like an accordion, and right now, she’s at full extension. You push the ends together more) and I found that this kind of visualization really works for me.

We did flatwork for half the lesson, which I appreciate. Flat work is the basis of everything, after all. Then, we began the jumping.

He emphasized pace and footfalls over counting strides. He told us not to count strides, and to instead feel the rhythm of the canter, and let the horse figure out the distance. No searching for distances for us! This suits me perfectly, because I have never counted strides, and just “ride out of hand” so to speak. And I don’t mean that in a classy, top end rider way, I mean that in a I’m too distacted and forget to count way. I have made half-hearted attempts to count my strides, but I guess in the end, I don’t really care enough. I guess I see a distance, and I know when to hold back and ask for another stride at this point, but I basically just go with the flow. So, this is quite interesting to me.

We did a few simple verticals, and then he had me jump one of the verticals from the opposite direction. This of course greatly upset Berry because there was a coop laying in the grass outside the ring, and she could see it from that angle. She refused the jump! I can’t remember the last time she refused. I was pretty shocked, but I turned around and did it again. Another refusal! He ended up dropping the top rail, which was fine with me, because I want a trainer that’s not afraid to take a step back and make sure everything is great at a lower level before raising it. 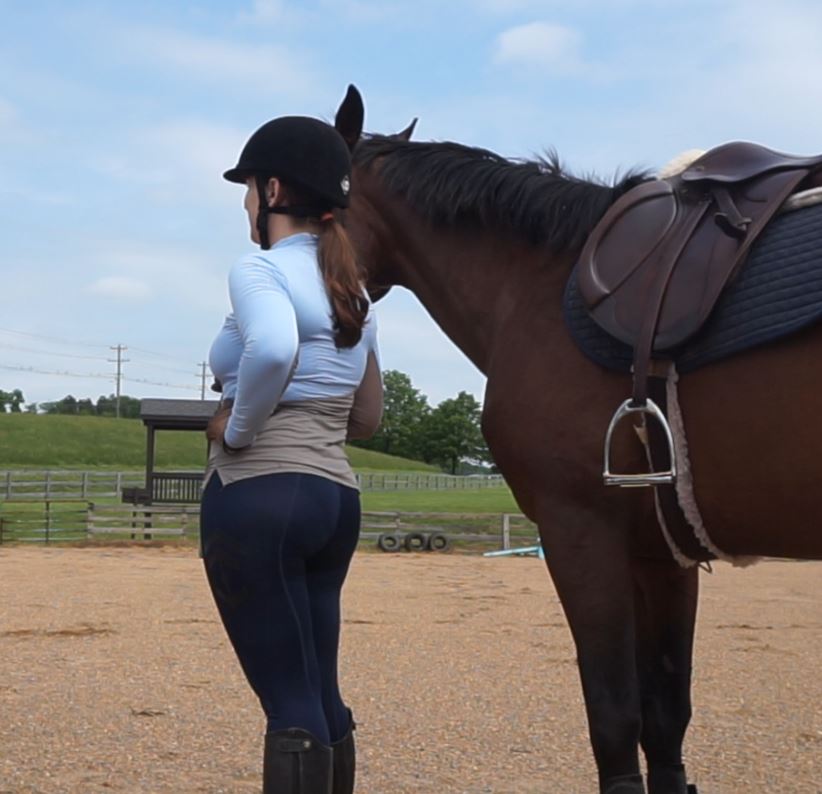 This photo has no relevance to this post, but is a great example of what we look like when I’m talking to someone.

He added in a 2’9″ panel oxer. This would have been the biggest jump Berry and I have jumped. We’ve done 2’9″ verticals, but never an oxer, and never a panel, and it looked HUGE. So yeah, would have been. She refused that. She did it in a new way too… when she usually refuses, I can feel it before the jump. She gets squirrelly, and I know she’s not feeling confident. With this one, she made it all the way to the base, solid distance, and then realized she didn’t feel confident and slammed on the breaks. I guess my legs must be getting stronger because I didn’t come off, I just slid forward and took the entire impact in my chin.

This has never happened to me, and immediately aftward, I wondered why riders don’t have helmets that protect their chins. It hurt so bad, I thought I broke my jaw, and I was sure I got a concussion. I was in a daze for a few moments while I felt my jaw line, but the pain faded pretty quickly, and I didn’t want to look like a baby in front of two people, so it was time to go at it again. (My jaw now has moments where it hurts, and other times when it feels fine. I think it might have dislocated, but I pushed it around a bit and my teeth mostly line up now. It’ll probably be fine!)

Trainer dropped the back rail of the oxer, and I went at it again. One small thing I am proud of is that I have finally learned to not hold a grudge against things like this. I think a year or two ago I would have been scared to do the jump again. But now I’m either numb to it, or I’m managing to control my mind enough not to let it be an issue. I went at the now just a panel, and it was great. No issues, no hesitation at all. It really felt like a lovely jump.

The trainer kept adding more pieces until it ended up as a tiny course of jumps. I focused on my pace, and he noticed that I softened way too much right before the jump, and I need to stop doing that. I think it was really productive, and it felt like such a good ride. 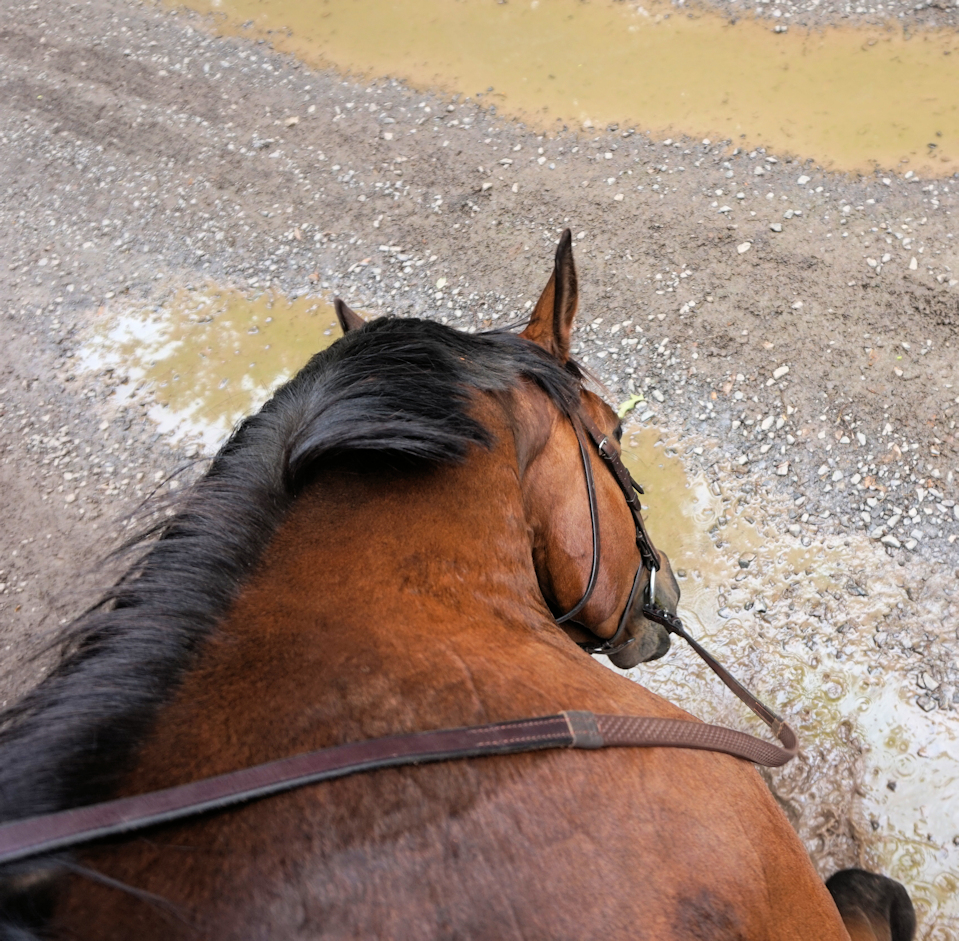 This is Berry right before she started pawing in this tiny puddle.

Pony was a good boy as well. It seemed like he and D’Arcy were having a good ride, and she jumped him as well. Towards the end, he started getting tired, and he reverted to “little kid pony mode.” He was literally acting like a stubborn little pony deciding he’d had enough of his small child rider, and he could just ignore her. Unfortunately for him, D’Arcy is a full sized adult, so she spanked his behind. This made him quite indignant, which is something I haven’t seen before.

She was asking for him to go down the line one more time, and he was refusing to walk another step. She whapped him with the crop, and his little temper flared, and apparently decided the best thing to do was hand gallop down the line, flicking his tail in indignation the entire time.

Since he is just a pony, the effect was comical instead of intimidating. It was essentially what D’Arcy wanted, so perfectly fine. He was allowed to end after that, being a perfect little pony.

We cleaned up the horses, and with promises of another lesson once the two big shows in my area are over, we headed out.

We went to visit baby horses after that, but when we returned, I had 6 round bales in my front yard that needed to be moved to the barn.

The delivered hay had been dropped in my front yard due to the uneven hill that goes down to my barn. It just wouldn’t be safe for a giant flatbed to make it’s way down there. That meant we had to push the hay down the hill manually. It sounded way easier than it was.

First, we used the tractor to push the bales. This resulted in the binding of the bales ripping, and we ended up with a lovely snail trail all the way down the hills. 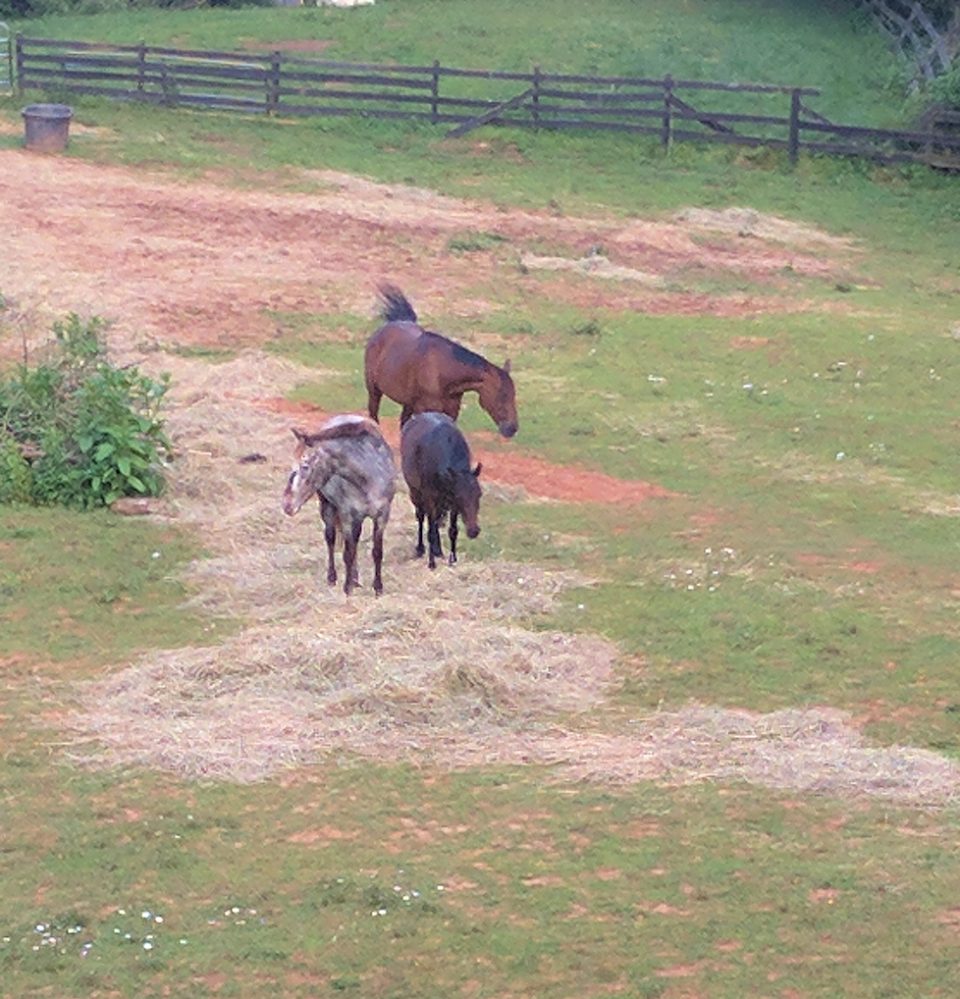 The horses like it though. It’s perfect for eating and sleeping in!

This happened with two of the bales. One exploded near the top of the hill, and the other exploded right by the barn. But to stay positive, four bales did survive the entire journey! Hurray!

It took an hour and a half to move these six bales, and all of us were sweaty and covered with hay, and scratches from hay. But at least… my horses have hay for the next six months…? Hurray….?….!