Far away, in the depths of Tennesee tourist country, there is a place called Parrot Mountain. It is literally a mountain of parrots. (Okay, maybe it’s more like a really big hill, but still, lots of parrots.)

We took a little family trip to Tennesee so Bridgette could visit with the grandparents, and since Parrot Mountain had been on my to-do list for a while, we checked it out. We were not disappointed. It was a beautiful place, with SO MANY BIRDS! I’ve never seen so many tropical birds in one place. 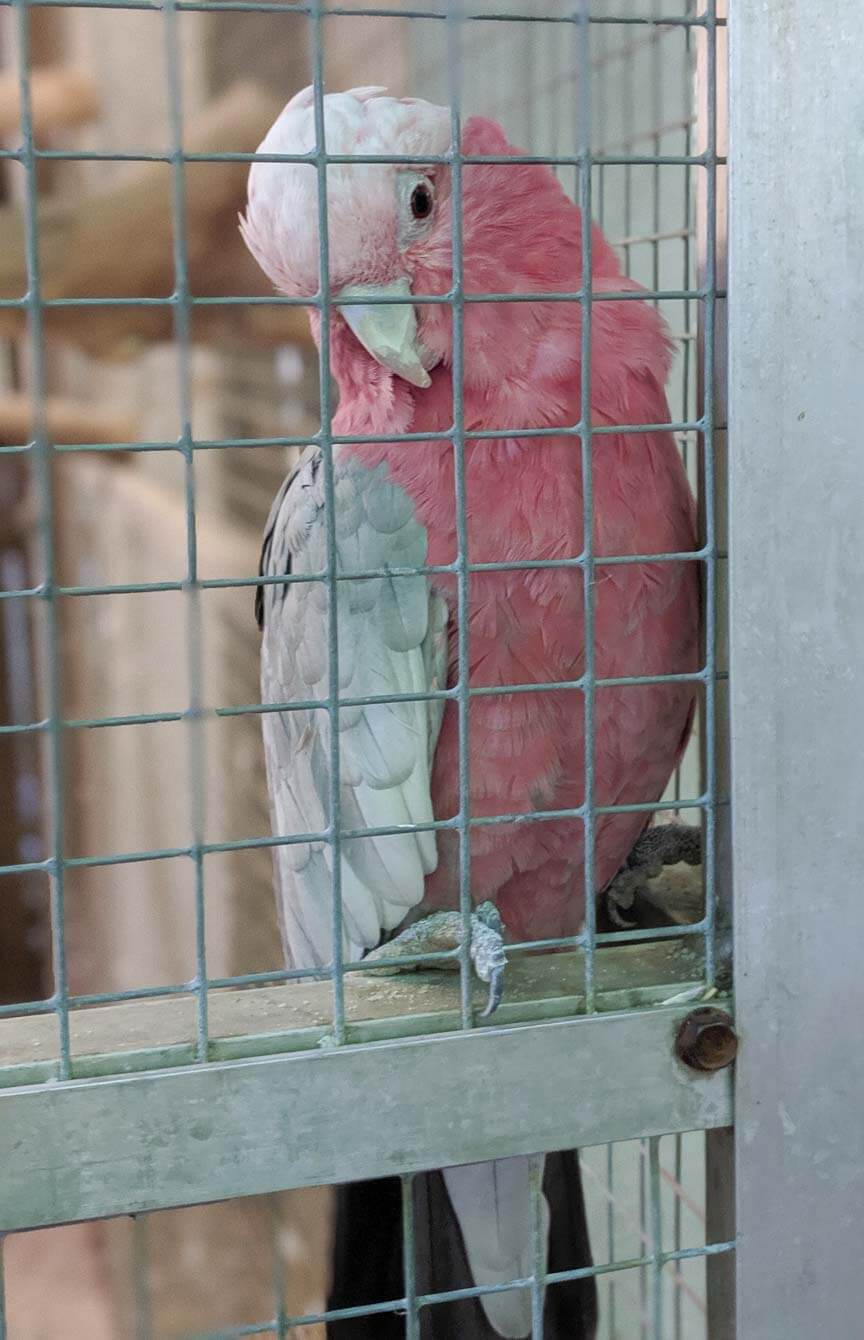 I’ll start with this beautiful pink bird, a Rose Breasted Cockatoo. omg so pretty. I want to take it home! 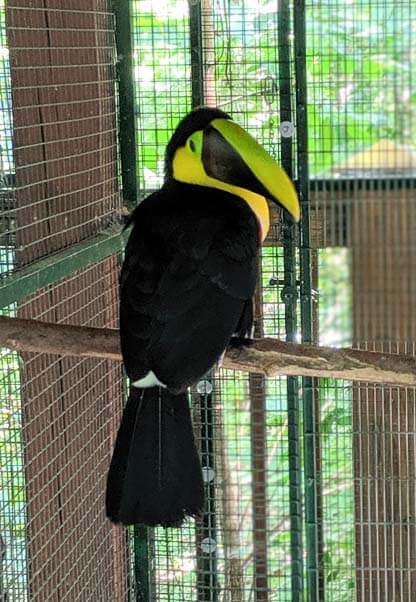 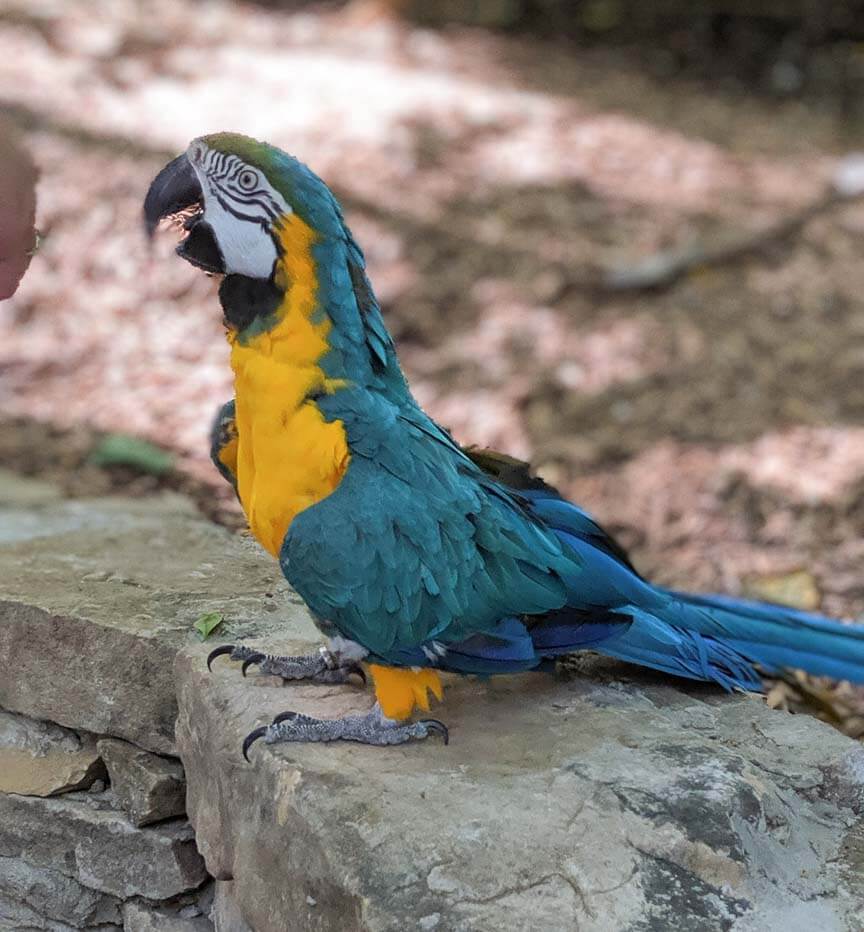 All the birds were on perches, except this guy who got off his somehow. He just hung out near his perch. 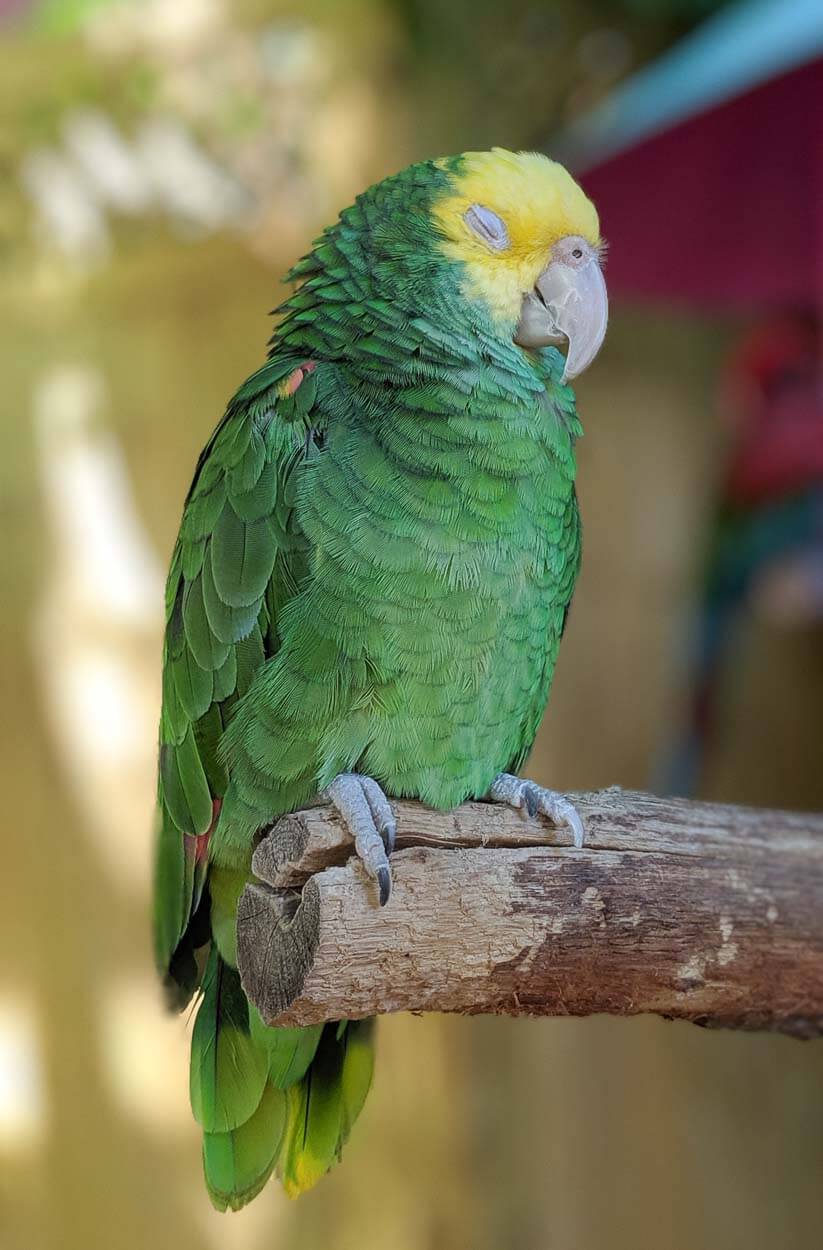 Not only were there lots of birds in cages, but there were also lots of birds free range. I am sure they had their wings clipped to prevent them from flying away, but it’s also possible they were just really happy birds who had no reason to leave. They all hung out on their perches looking pretty happy.

The best part was being able to handle the birds. They had an entire section with so many birds to be handled. Little ones, big ones, all sorts of varieties. A few did have signs indicating they bit, but no one stopped the brave souls who still wanted to handle them. 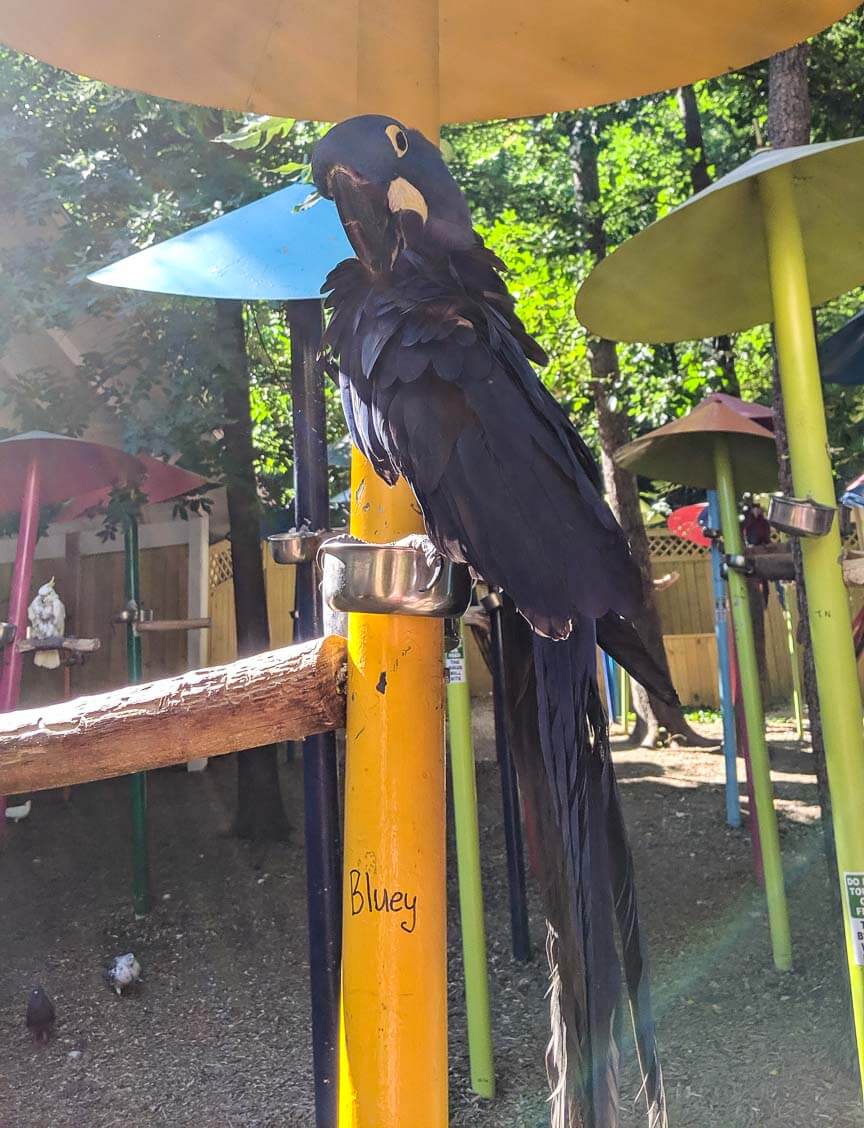 A smug looking bird that bites. But so pretty! A Hyacinth Macaw. An employee had another one of these birds and was playing with it, swinging it, and letting it climb all over him.

I didn’t think I was afraid of birds before, but turns out I am kind of afraid of birds. Dave had no issues picking them up and handling them, but I was terrified they would bite me, even the little ones whose bites did not hurt (yes, I did get bit by some little ones). I did still pick up some of them, but reaching out to them to be picked up was scary. 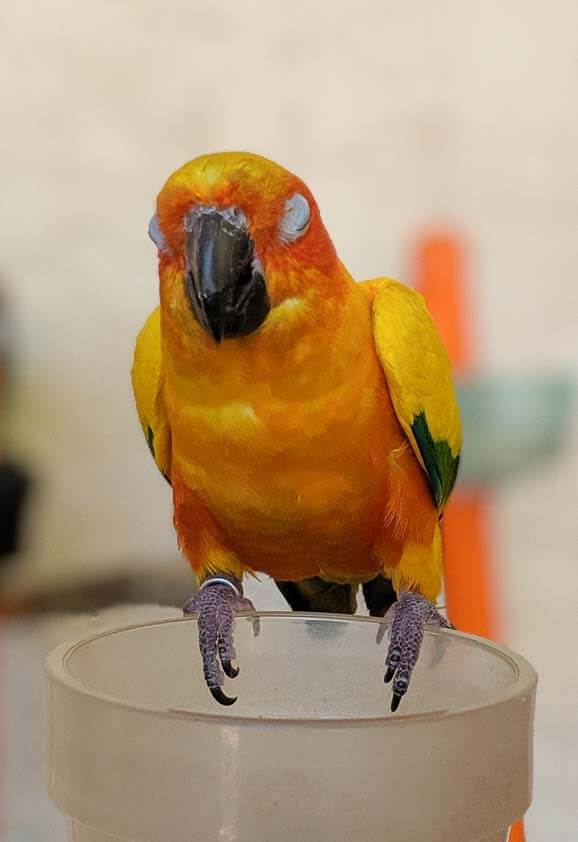 Dave had no issues reaching out and picking up some enormous birds. In fact, I think they sensed his confidence because one of them just jumped right on him when he walked by. 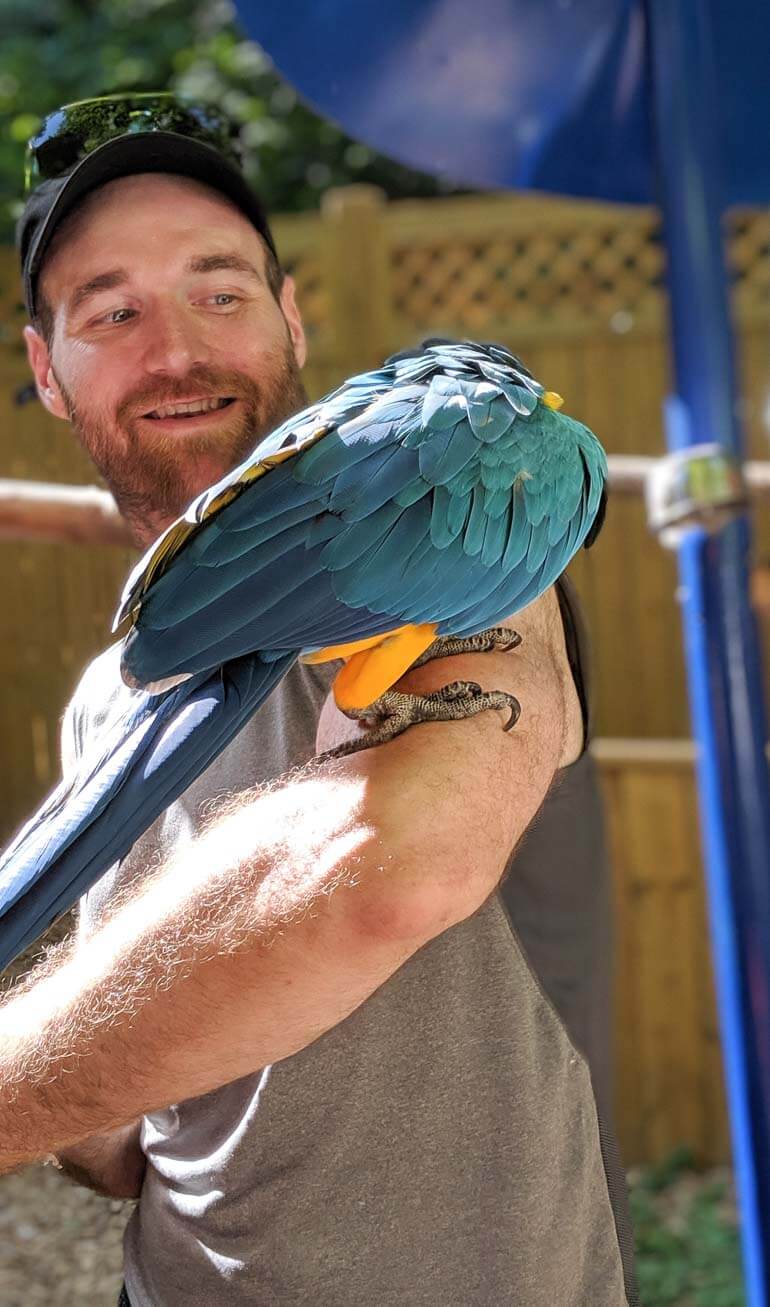 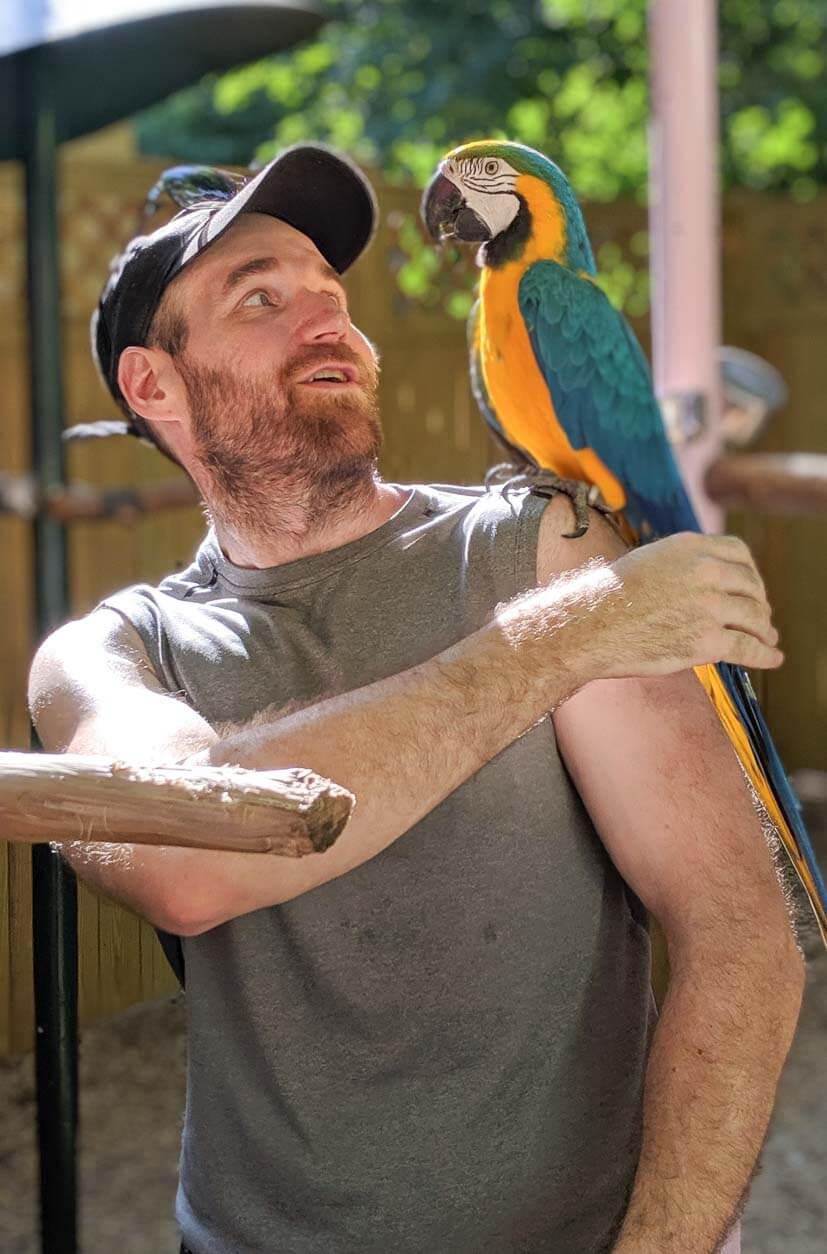 I admire that bravery. I’ll just stick with massive farm animals though. 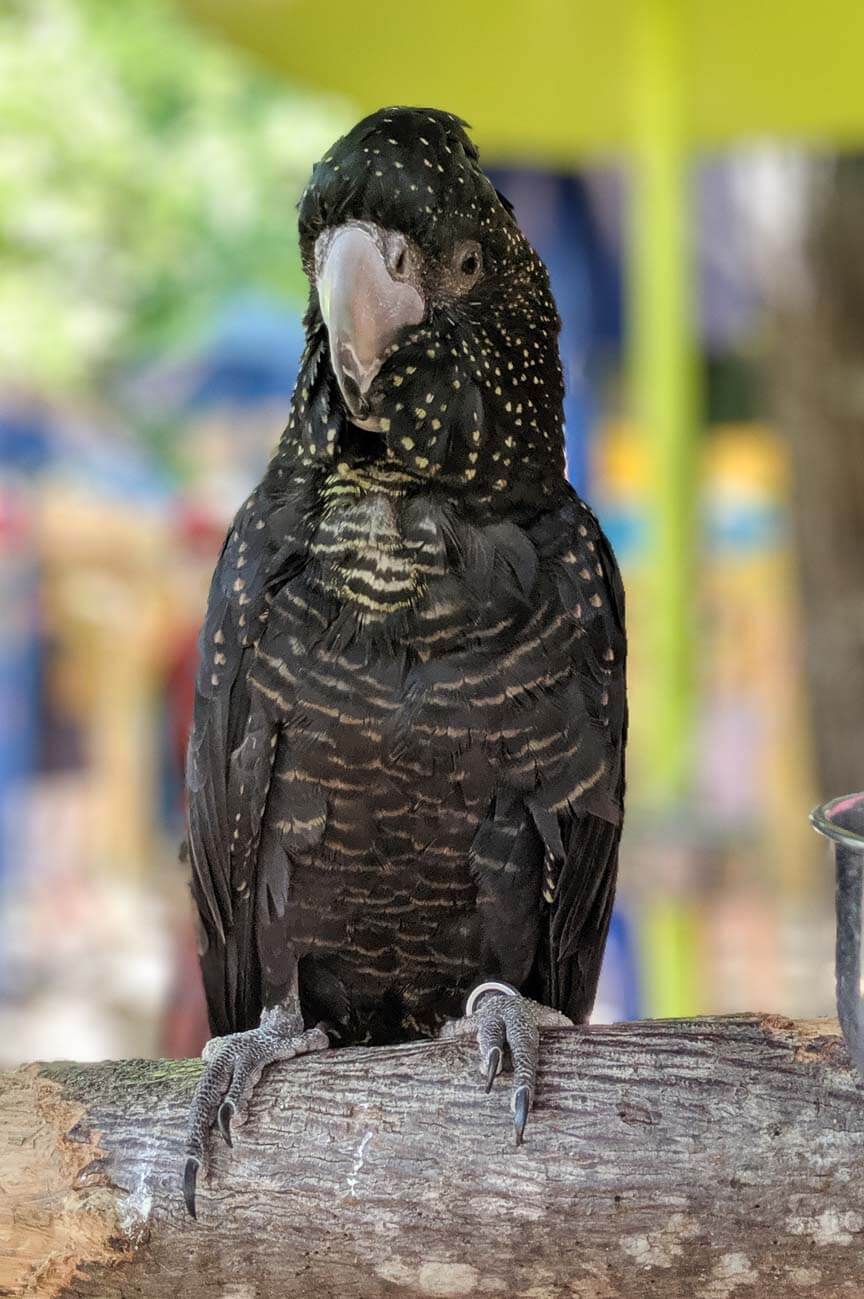 I believe this is a red tail cockatoo. He stuck out as the only bird not obviously colorful. But he was quite beautiful and unique. 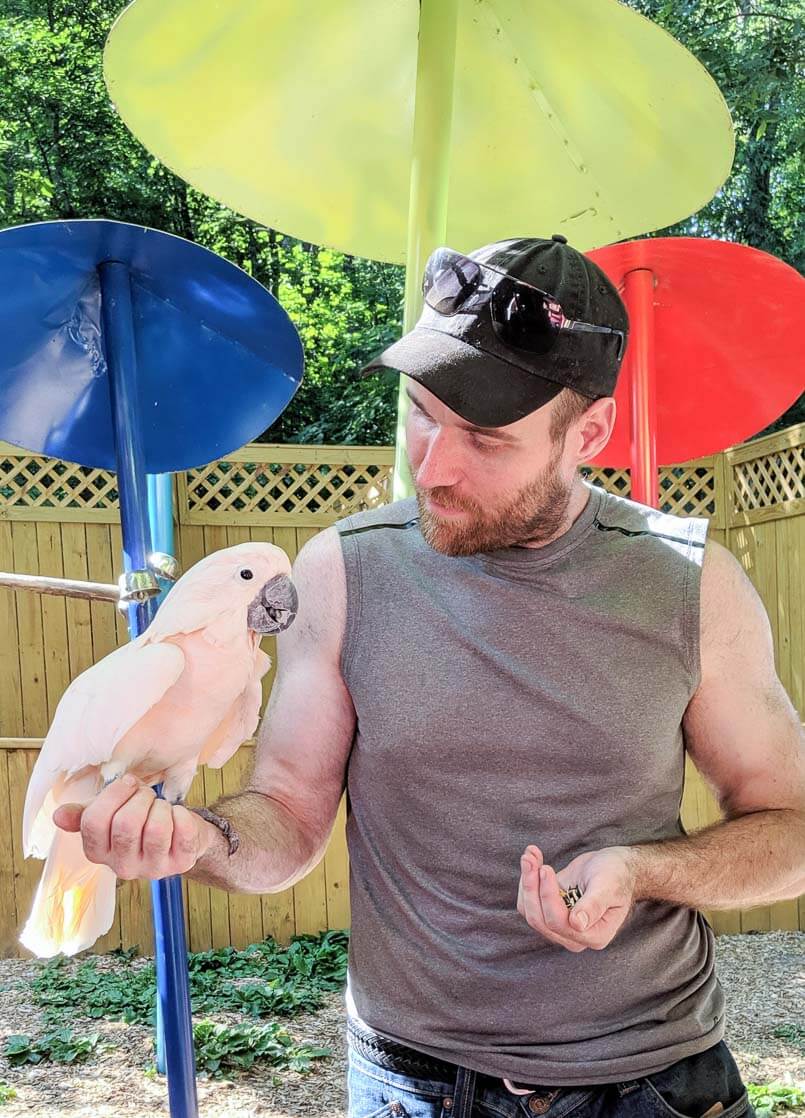 This one told Dave it loved him, so naturally he had to pick it up.

There’s also a nursery with baby birds, and if you really loved your visit to Parrot Mountain, you can buy a bird. It was tempting, but I already have enough things to take care of. But the babies were so cute! Even though they basically looked exactly like the adults, they were still very cute, and very interested in people. One climbed up on my hat. There was a beautiful red eclectus that was so sweet and hung out on my hand for a while. I really wanted to take him home!

We also went into a cage with some sugar addicted birds and fed them nectar. We were swarmed by the little guys as they lapped it up. After they finished what we had, they continued to lick my hand in an effort to find more nectar.

The only thing that would have made this perfect is if Bridgette was old enough to appreciate it. She was way more interested in her bottle and sleeping than looking at the birds though. But we will be back, and she’ll get to appreciate it then! 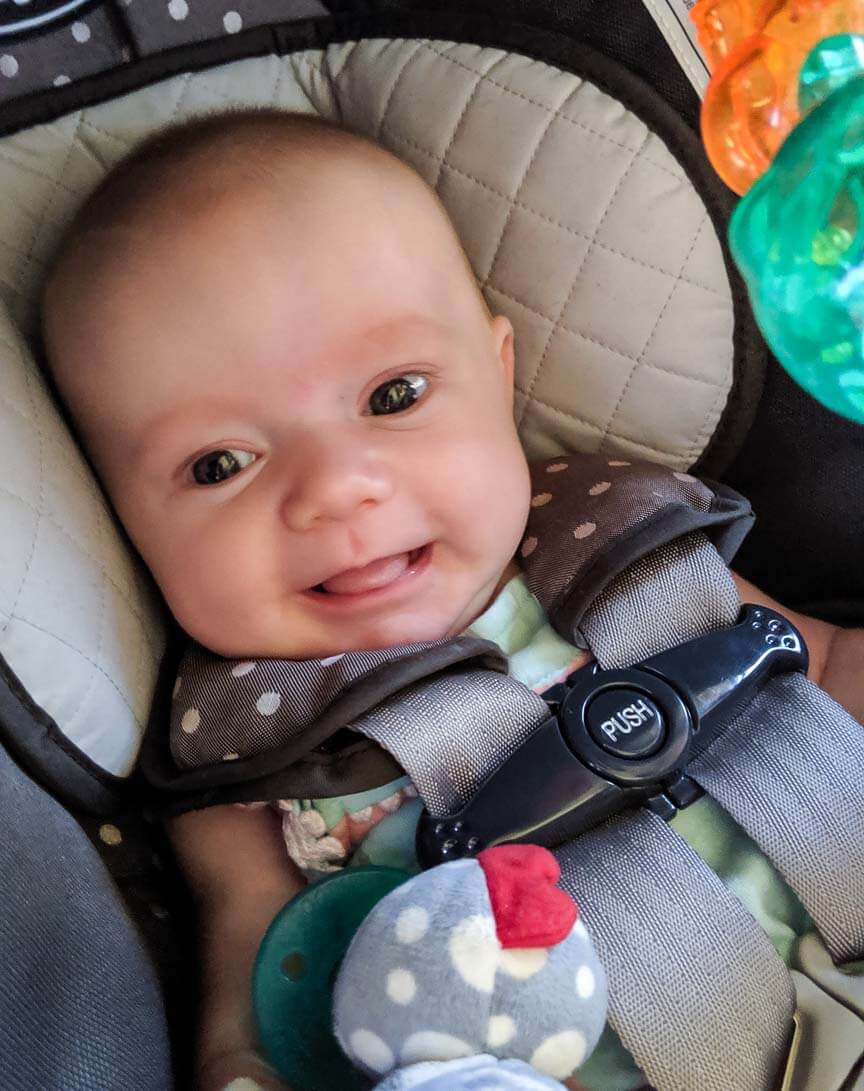 My good little traveler! Such a happy girl!

Overall it’s a really fun place. We’re planning to visit the birds again next time we go to Tennesee. Maybe this time I’ll be able to reach out for them without fear.

*Some of the photos look messed up because of my phone’s “smart” feature. NOT SO SMART, ARE YOU PHONE?!