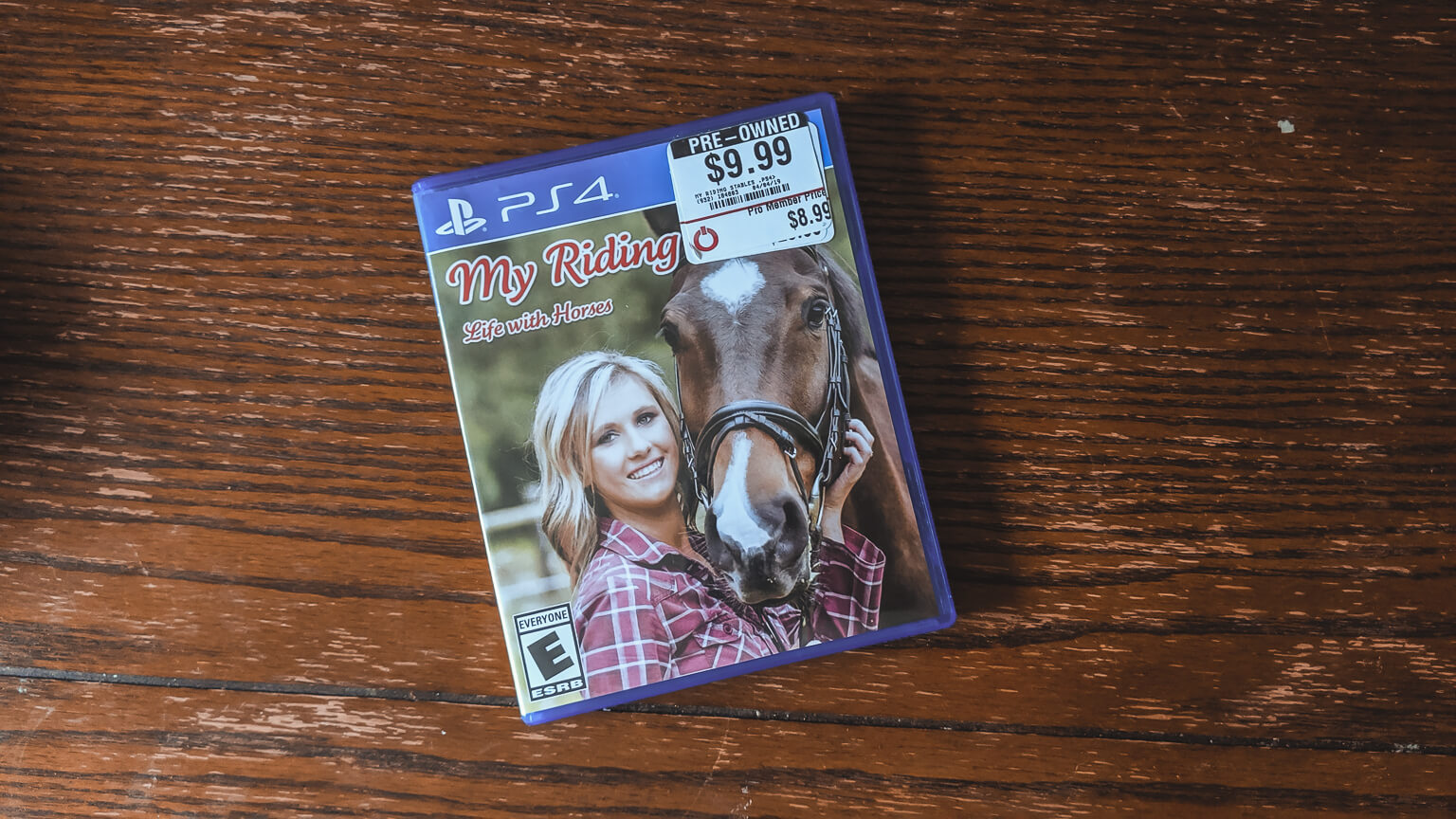 Did you ever play horse video games as a kid, dreaming of riding your own horse? The controls were clunky, the graphics poor, and the horse mechanics were often messy, but it was the best you had, so you played it anyway. I used to imagine the button press coinciding with the jump really would make me a good rider.

If you want me to get right to the point, I would give this game a 0/10 stars, the primary reason being that it’s just flat out boring. I had to force myself to play, thinking that maybe it gets better and I’ll figure out why everyone liked it, but that didn’t happen and I didn’t want to torture myself further.

If you are dying to know why this game is so awful, read on.

There are two options for game play: Story Mode and Free Play. Free play is literally moving a horse around on a fairly boring field with no ability to jump. Once you’ve explored the small area there’s no reason to play it that I can see.

In Story Mode, you’re dropped into the game with a list of tasks but no instructions on how to do these. Luckily it’s not too hard to figure out, but it’s annoying, especially when the task is, “upgrade to a 2 star facility,” without any context on how. It just happens that moving through the game’s limited activities will cause the upgrade to happen.

“Credits” must be earned by doing various tasks. At first, the only task is a lunging-style mini-game, and it is overly simple, repetitive and tedious – words that could be used to describe just about everything in this game, actually. The foals move on a circle, move the foal to the correct circle and stop on the highlighted area to pass the training. It is more boring than it sounds.

Earn enough credits to “renovate” other parts of the farm and open up other ways to earn credits. I got as far as some kind of massage therapy clinic and the breeding shed, but there’s also a guest house. The guest house might have brought in some interest as then you’ll have people come to ride your horses, but based on the rest of the game, it didn’t seem worth it to put the time in to pursue that goal. The mini game for the massage therapy was even easier than the lunging game, and it paid way more credits. All you need to do is find a spot and hold a button for a length of time. Why bother training horses at all when this pays the bills? I quickly racked up enough money to buy everything I possibly could at my stage.

The riding is bizarre. There is no steering, only speed control. Supposedly the bars are supposed to track your stamina, but mine did not, so I had no idea how to pace myself. When I experimented and kept the horse slow, it didn’t seem to increase the stamina at all, just made me ride the course slower, with the horse running out of energy at the same spot he would if I galloped the whole thing. There are jumps, but they only require hitting buttons way before the jump, with plenty of time to hit them, and therefore, not a real challenge.

It takes way too long for anything to happen. The races only happen once a week, and the rest of the time it’s tedious barn chores and earning credits. Every Sunday, you can win once race, and that progresses the game. At a snails pace.

Since this is always a fun part, know there’s lots of inaccurate and infuriatingly wrong horse content. The makers get the horse colors wrong and invent a few new ones. The one pictured by the first paragraph is described as “light bay.” You get three options of breeds: andalusion, friesian, and hanoverian. Of course, the common breeds, everyone has one or more of those. And these horses are meant for… racing. These notoriously slow and bulky breeds are meant to be racers. It’s few and far between that non-horse people think there’s anything more to horses than racing.

The horses follow the avatar around with no bridle or halter, in what I assume is some kind of horse whisperer type situation.

The care system is not based on actually caring for horses. I was told to urgently bring my horse in. Okay, brought it in, groomed it, fed it, rode it. I feel like logically the horse needs to go out in it’s field at some point. I put it back out, and there’s an urgent message to bring it in. Apparently these horses were not meant to be outside. Their delicate coats cannot handle the harsh in-game atmosphere. No, they perfer being in their stalls, all day, every day.

Stuck in their 12×12 prisons, these horses only eat once per day. They really make their meager rations last.

The grooming part is okay, especially if your favorite method of grooming is full force spraying with a hose (mine is.) But the hoof picking part is not right. The hooves are described as being “fleshy.” “Use the metal on the stones, and the brush on the fleshy part,” say the instructions. Your horse loses trust in you for using the metal part on their soft, fleshy hooves. Hooves stay clean much longer than coats. Plan to groom everyday, but hoof picking only needs to be done once every two weeks, which is the maximum amount of time I could play this awful game.

Tedious and repetitive. There’s games I played as a kid that were way more fun. The only reason to play this game is sheer desperation for something horse related. I do not understand the positive reviews I am seeing for this game.

My recommendation – play a different game entirely. Or learn to bake. Or walk your dog. Literally anything but this game.