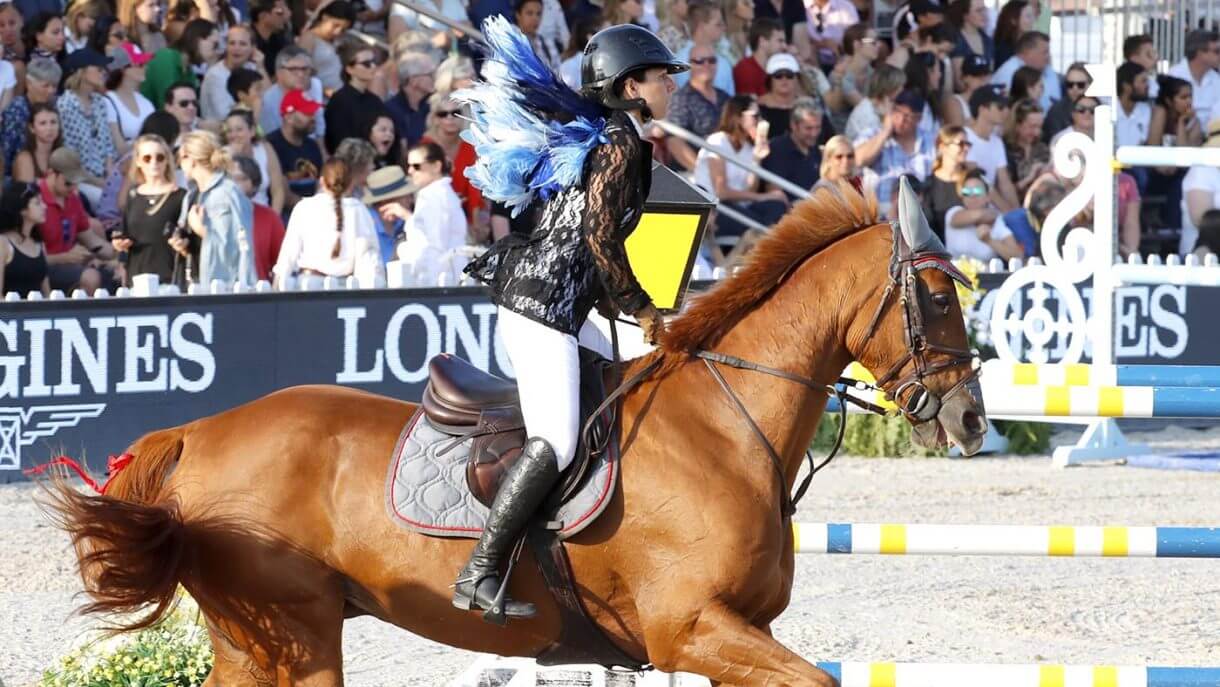 Israeli showjumper, Danielle Waldman (formerly Goldstein) recently wore a lace jacket to compete in the Longines Global Champions Tour final in New York. The equestrian was formerly known for her colorful feathers woven into her hair, as well as being ranked 40th in the world for Showjumping.

The feathers stayed in, of course, a cascade of blue, black, and white, which in my opinion gave her the appearance of an angel.

Danielle designed the jacket herself, telling Horse and Hound, “I wanted to design something ultra-feminine with a nod to fashion, while also being functional and sporty,”

Danielle had previously said she was creating a line of equestrian wear to be named Vermogen. A search on Vermogen did not turn up any equestrian wear though, so it may still be in progress. I’m wondering if this jacket is meant to be one of the featured pieces of her new collection.

When I saw this on facebook, the comments were mixed. Some loved her creative spirit, others felt it was an insult to the sport. Others likened the look to the western show world. It seems like the tradition there is to have loud colors and get as much attention as possible, characteristics that Danielle is fond of.

I personally feel like there are three aspects to the discussion of this jacket. The first is appropriateness for the sport/show ring. Many people feel it isn’t, This is actually not an aspect I care about. It’s a legal jacket as far as I know, even if it’s not to some people’s taste. If she’s following the rules, she can do whatever she wants, and it affects no one.

Second is the actual style of the jacket. I wouldn’t wear it. It’s not my style, and I don’t think it’s flattering. I’m not a fan of lace in such a big area. I like it more as an accent, to be used sparingly. And unfortunately, it does look a bit boudoir.

Finally, and this is the part that I don’t like about this jacket, the actual construction. I think the idea of incorporating lace on a riding jacket is actually a good one, but in this particular instance, I think it missed the mark. There’s the practical aspect – all those holes would definitely get caught on bits of horse tack. But the part that really bothers me is what is visible underneath – You can clearly see where her white clothes end. There’s a hard line. Her arms are clearly visible, and not in the victorian, “Don’t show your ankles!” type way, but a, “it looks weird to go from white bodysuit to bare arms,” type way. It ruins the line of the clothes. It looks poorly thought out.

When you have an outfit like that, with a statement piece, just putting on the statement piece isn’t enough. It has to actually work with the rest of the outfit. I don’t think it does. But, I think it would be easily fixable – a liner underneath would blend the shirt and arms more gracefully and be more flattering. It wouldn’t be the open-air lace anymore, but I think it would look pretty amazing. Just not a nude liner – that would probably bring on a different kind of criticism about appropriateness (although if anyone could handle that, I bet she could.)

Of course, this is all just my opinion and therefore worth next to nothing. Danielle will keep doing Danielle, and good for her for just doing her thing.

(I think people love to discuss fashion in general though – do you have thoughts on the jacket? Would you wear it? Could this be a step towards injecting more personality into show clothes?)