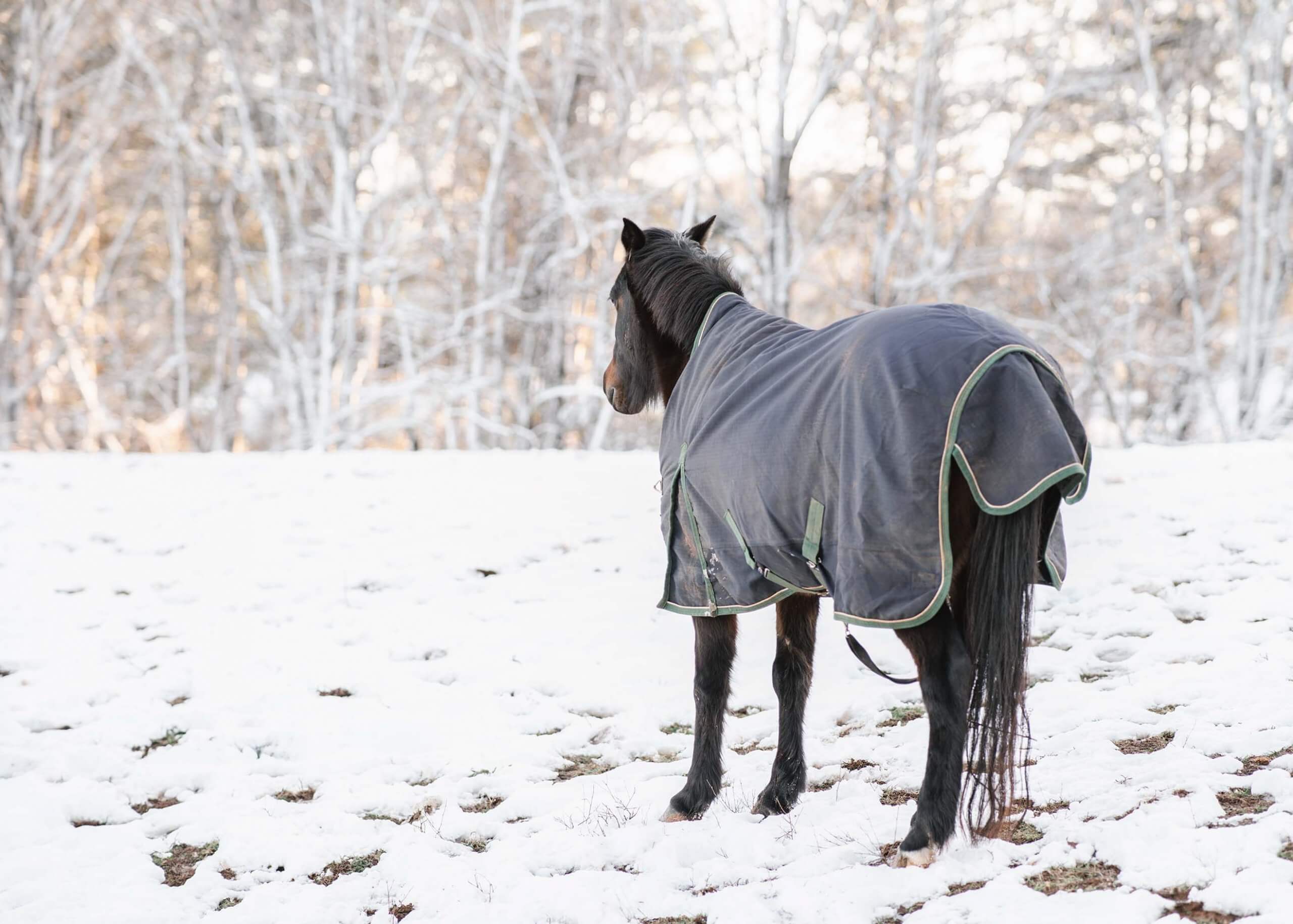 After spending most of last year as a lesson pony, Pony has returned to me.

My understanding was that he was the world’s best pony at his lesson barn. I’m not sure of the exact details though. I really should have asked though. If there’s one thing I love, it’s hearing how great my pony is, and exactly why he is so great.

I visited him one time while he was at his lesson barn. The leaser wanted photos of a horse she was selling, and I agreed to do them if she would hold Pony while I took some glamour shots of him. It worked out great – I’m going to be framing some of the photos.

By all accounts he was doing his lesson job well. I have to assume that nearly no news is good news. But, in the beginning of November, the leaser asks me if I can take back Pony. Now that it was winter, the lessons had slowed down and there wasn’t enough work now to justify him being there.

I was going to take the Pony back, but I had a problem. At that point, I was super pregnant ( which is much more pregnant than normal pregnant) and I was struggling enough to take care of the two horses already on the farm. Farm work in those days was super awkward. Imagine you have a giant beach ball attached to your midsection, and try to navigate around with it. Also, pretend the beach ball is made out of paper laid across wire supports, and you’re desperate to not rip the paper. Also the paper sometimes feels like it’s ripping apart on the inside if you do the wrong thing.

It was those times it felt like the pregnancy would never end and I’d just be pregnant forever, horribly awkward and unable to do basic tasks. But then it was all over, and now I hardly think about it, except in moments like this. Ahhh, memories…

But anyway, because taking care of an additional horse seemed like a monumental task, I asked if she could wait until after I birthed my litter. Luckily she was okay with that, and a few weeks later, brought my pony back to me.

Pony has been away for many months, so I wasn’t sure if the other horses would remember him. Ideally, I’d have a second pasture to put him in, but it’s been a long time since I introduced another horse to the herd, and I’ve dismantled all my additional turnout spaces. (done for clearing land, not just because I have a vendetta against turn outs).

So I just stuck him in the field. I mean, what else could I do? And if your answer is to introduce over the fence and then stand there and wait until everyone seems to get along, that is no answer. Unless I stood there for days, they are still going to do the “New Horse in the Herd” dance. And maybe they still would, even after days.

Vintage and Berry were on the other side of the field when I put him in, but they noticed pretty quickly that he was there. Then I watched as the three stooges did their performance, running around the field in a comical and slightly scary way. I was kind of afraid someone would get hurt, but at the same time, LOL what is going on??

Pony trotted around, Berry and Vintage following, and then Pony approached Vintage, and they backed off, and then went at him, and then he ran away, they ran after him, and everyone did some prancing and rearing. It could have been a celebration of seeing him again, I suppose.

It didn’t last very long. Everyone ran out of energy pretty fast, and then it was just a walking around and standing party.

I still wasn’t sure if the horses all remembered each other, but at least no one was trying to kill anyone. I was curious if Pony remembered me. When I went out to visit, he came right up to me to be cuddled, so I’m pretty sure he remembered me. He’s always been very shy around strangers.

It does seem that Pony gained some confidence in himself while he was gone. The leaser said Pony was head of the herd there, which is surprising to me. He’s always been low in the herd here, at the bottom really, except for when Stu was here. Stu was at the bottom. But he’s bolder now. He literally goes up to Berry and starts eating out of her grain dish. She tries to chase him off and he mostly ignores her. It’s pretty shocking.

I’m pretty sure he’s going to gain a ton of weight if he keeps this up, so I’d like him to stop. Guess I’ll have to go back to feeding in the stalls… but it’s just so much easier for them to eat in the field…

I potentially have another lease lined up for him. It sounds promising, a little girl wants to use him for Pony Club. Part of me wants to keep him though. Bridgette could ride him. We could have adventures. But in all honestly, she’s really not old enough for much more than leadline. He’d be better off going to get experience to be a better horse for when she’s older. But still… if I had more free time, I think I’d just keep him.

The next week months are going to be a juggling act in seeing how I’ll be able to navigate having all these children and horses, and that’s without figuring in Pony. There’s sure to be a way though… I hope? Guess we will see!