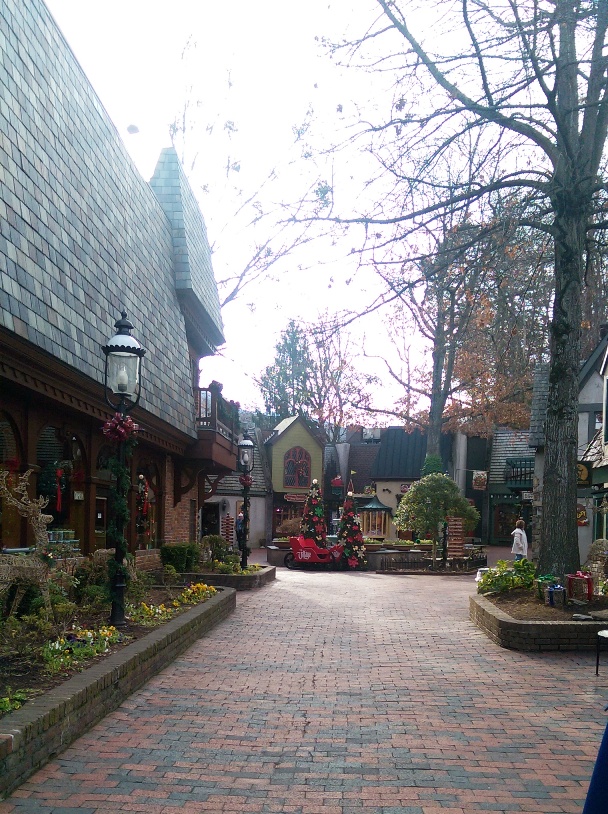 Now that my sweet little Berry is feeling better, I can continue the recap of my trip to Tennessee. We spent a day in Gatlinburg, which is a tourist town in the Smoky Mountains, full of shops and restaurants, and little attractions. Its extremely popular, and the little two lane road leading up to it gets super packed on weekends, holidays and during the summer. The first time I ever went there, it was like 25 degrees, and it was still packed.

I decided to get everyone moving there early, so after shuffling everyone out of the house, we got there right about 9. Apparently this was too early for the masses.

We tootled along, checking out a few stores as we went. I convinced everyone to go in one store because I saw a picture of a fat little cardinal in the window, but I was unsuccessful in finding it in the store. But I did find an adorable owl.

He may be green, but he is NOT a Christmas ornament. He is simply a green owl ornament.

Sadly the owl was not on sale, as they called it a year round ornament. I’m not the type of person who hangs ornaments year round, so I’m not really sure what to do with this other than hang it on my Christmas tree. I should have asked for more clarification on what this is intended to hang on.

I suppose its red earrings make it a Christmas ornament, as opposed to just being a deer.

The reindeer is okay. He’s not an owl, but he’s pretty cute, and the sale sealed the deal. I was forced to pay full price for the owl, regardless of the logic I tried on the shop keeper.

After that, I must have had owl fever, because in the outdoor store at the end of the strip, I found another owl I had to have.

To be fair, he is super cute.

They had another stuffed owl I wanted too, but I’m trying to take in my owls in moderation. Instead, I got this board game, as I love board games and I have never heard of this one.

With an “AVERTISSEMENT” and “WARNING” that big, it has to be good!

The outdoor store also has a climbing wall, which my brave little 5 year old niece decided to tackle. I was pretty impressed with her bravery.

She only went up about 10 feet, but it was still an impressive effort.

We went back down the strip, and found someone carving a log with a chain saw. It was interesting to watch, but super loud. I watched for a few minutes, but I could not figure out what he was trying to make.

It’s a good thing they keep him in that netting cage, I’ve seen enough movies to know that you can let people run around with chainsaws!

We all herded into the jerky shop that was next to it. I’m not a fan of jerky at all, and to me, that store smelled gross. But everyone else seemed to like it. They had weird jerky, like alligator and shark. I didn’t think that was legal, and said as such, but the shop keeper assured us it was legal. Once everyone had their bags full of nasty smelling jerky, we moved on.

We went to a few more places, included the arcade, fudge shop and, for my husband, the magic shop. He likes that kind of thing, and it makes him nostalgic for his childhood. It doesn’t do it for me though, so I sat on a rock outside and watched people walk past. By then, Gatlinburg was getting packed. The road going through was a parking lot, and the sidewalks were crowded with people.

Continuing down the strip, we went into the indoor mall, which sold little dog carriages, similar to the kind that children sit in. I really wanted one, but they were expensive and I’m not sure I’d ever use it. Although it would be super cute to push my yorkies around and keep them with me at all times. They’re lazy enough to enjoy that.

Everyone was getting tired, but we’d been promising the little child we’d play mini golf before we left, so we stopped at the Duke’s of Hazard store/go cart/ mini golf place. We did have to hop over the party of 6 so we wouldn’t get stuck behind them, but it was a fun course. I don’t want to brag, but I did end up winning. My little niece sweetly told me, “Good job!” Such a cute little kid.

The Life and Death of Dogs