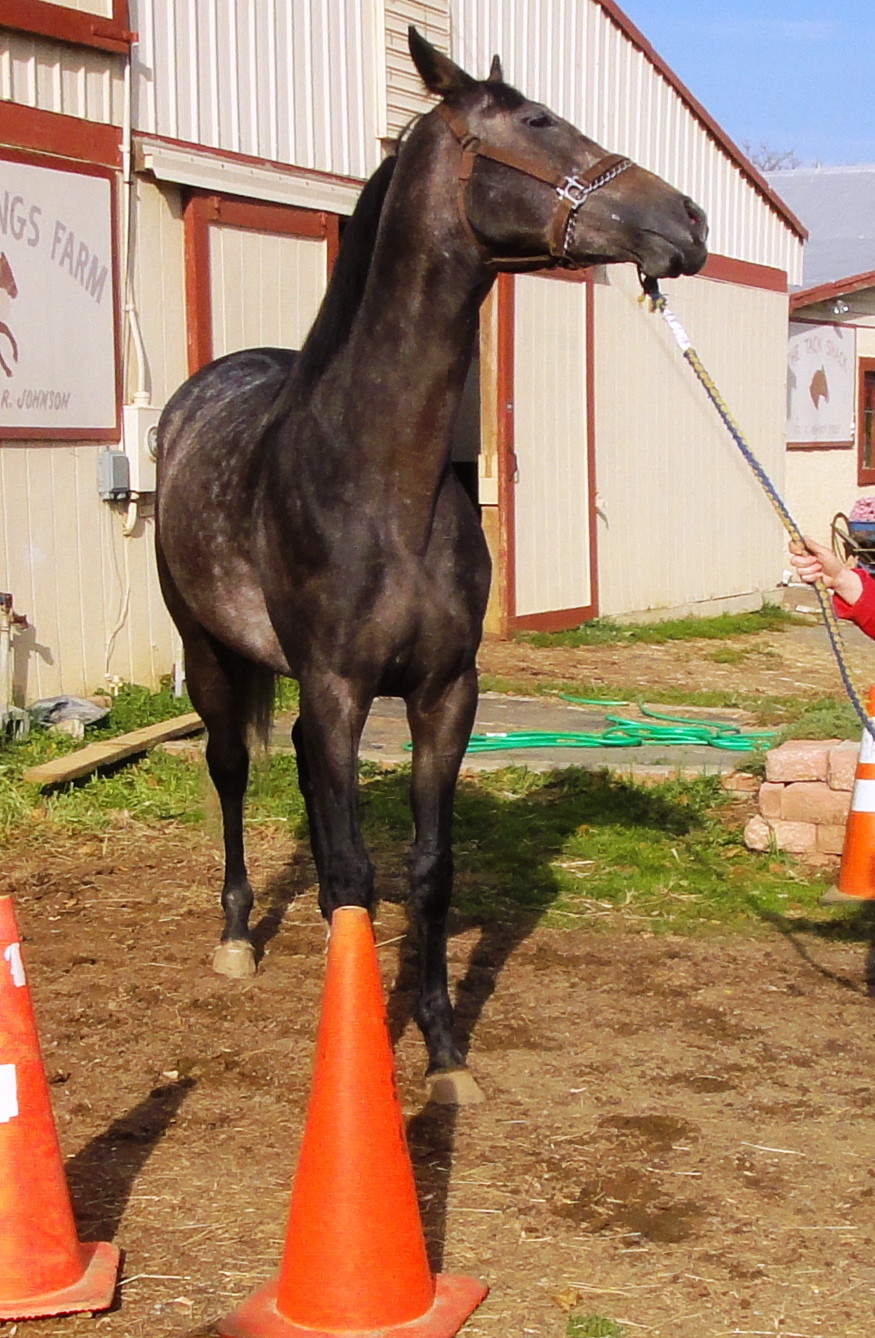 I got Evee in 2010, straight off the track. I literally went to the track, and bought her from the trainer. At that point, I’d just recently taken up riding again after a few years off, and I thought I was the greatest ever.

I’d always dreamed of buying a horse straight off the track, ever since I knew it was possible. Of course I thought I knew what I was doing – although not to toot my own horn, I think I actually did okay, I just ignored the advice of the vet that I paid to come evaluate the horse (she was a bit lame). My error was that I fell in love with the big fancy gray, and ignored all other qualities.

Hello, I would be happy to crush your dreams for the next few years. Please sign on the line.

Although over confident with my own abilities, I wasn’t a total nincompoop. I did okay for a while.

Lunging as a training device was new to me. When I was young and brave with Vintage, I’d just climbed on and stuck on through all the bucks. But I thought (and still do think) it’s a good tool, so I used it with Evee. But, being relatively new to it, her reactions scared me a little.

The seed of fear was planted, but she hadn’t acted like that under saddle, so I just began to dread lunging her. Once I got on, she was quiet, and such a good girl.

But another seed was planted, that I didn’t realize. Dave, who didn’t ride or train her, spoiled her and gave her treats all the time. She realized Dave was the bringer of all good, and expected nothing of her.

She began reacting to outside stimulus. It started with Dave. I got into the habit of pausing when Dave came into the arena, and she would get a pat. She began rushing towards him when she saw him, and then acting dead when I tried to pull her away. At those times, I felt like I was wrestling all 1200 lbs of her. Eventually, she was the slowest possible horse unless she was moving towards Dave. If I gave her a kick or rap with a crop, she’d kick out a leg, or just slam on the breaks. I wasn’t used to it, and it unnerved me.

One day, a horse whinnied outside the arena, and she flipped out. She reared up, and we got into a very brief wrestling match over the reins, and they broke. I lost my stirrups, and she galloped around the arena bucking until I popped off.

My fear increased. I was afraid of that happening again, so I was afraid to ask anything of her. It didn’t help that the arena was in a field of geldings and she was a huge flirt.

The safest thing to do was groundwork, so I did that. I became reluctant to ride her.

Even groundwork had it’s risks though.

Yes, I had a trainer, and I took lessons. I had my trainer work with her. For whatever reason, they weren’t very productive, but that wasn’t for a lack of trying. She was unenthusiastic and grouchy. I ended up cancelling my lessons because I just didn’t want to ride her.

If I did ride her, walking was safest.

And then the nail came in the coffin. One day, I was riding her and the geldings were flirting over the fence. She was rearing, and I decided I should get off. I lead her out, and when I was shutting the gate, she reared up and struck me in the arm. She didn’t damage me, but it was shocking. I put her in her stall and cried. I hated her. I tried to figure out why I had thought this was a good idea. I felt like I was in a situation I couldn’t get out of. That horse had my number, and knew it.

I didn’t go to the barn for the rest of the summer except to drop off my check. I didn’t think I could sell her, I didn’t want to make her someone else’s problem. I decided I was tired of paying board for her, so I decided to take her home. But I didn’t want her to be alone, I would find her a buddy. That’s when I got my sweet little angel, Berry.

I took them both to the family farm. Riding Berry made me remember why I loved riding. Even though she was a baby, she was just good. She didn’t notice every mistake, or she just didn’t mind it. She didn’t scare me, or challenge me. It was just fun, and that was it.

Vintage says, “I dislike you immediately!” Also notice that Evee is like twice the size of Vintage, in nearly every way. Even her ears are double!

Eventually, I got Vintage too, and I wondered more and more what the point of Evee was. I got her a full vet workup, she got injections, she got a custom saddle, and while she didn’t rear or scare me as much at the new farm, she was just miserable to ride. I didn’t know how to explain to Dave that I was dumping all this money into her, but I still didn’t want anything to do with her.

With Vintage and Berry, I never wanted to ride Evee. But I didn’t want to just leave her to nothingness. I decided I was going to give her a good chance, and see if I could find her a new home.

I took her to my new dressage trainer’s. It was pretty obvious was she had been missing this whole time: Discipline – Doled out generously. She arrived at the barn on her hind legs, and my 60 year old trainer came out and gave her a battle right there in the parking lot. I think Evee was immediately intrigued by this new comer, and she never reared again at that property (although I always had to use a chain on her to keep her behaving elsewhere).

Then, the work began.

Her last bit of resistance

I will meekly do as you say now.

She really just needed a firm hand. My trainer told me she would consider Evee a professional’s horse, and that I could learn a lot from her. But I had already detached from her the moment she kicked me in the arm, so someone else was going to get the privilege of learning from her. My trainer worked with her for a while, and she became better, but I would never be able to trust her. I wanted her gone.

I made an ad, emphasized she was a pain in the butt, and offered her free to the right home, and a trainer approached me about her. It was a good fit, and she did a great job with her. I don’t know how her personality is, but she’s posted photos of her doing cross country and jumps, and looking like a perfect 10. I do get jealous sometimes that I gave up a seemingly gorgeous show quality horse, but then I remember the years of misery I went through with her. And I remember that my two sweet mares, not big, not fancy, take care of me in a way Evee never did. It is an enjoyable experience to train them, work with them, and ride them. It’s not pulling teeth like with Evee.

Knowing more now than I did then (no issues disciplining that Pony!) I probably could have taken her on at this point. But she was such an opportunist, ready to take advantage of anything, that I don’t know that I could enjoy being around her

Part of me still doesn’t understand why it happened the way it did. How did it start out so well and end so badly? If I had kept her, and not sought help, would she have become worse? I was not inclined to work with her, so at the very least, she would have ended up being someone else’s issue. I had gotten many responses from her ad from people who seemed even less experienced than me and it made me wonder, had these people been so into the idea of a beautiful, difficult horse they thought they would tame her? Was that what I was thinking when I met her at the track?

I also wonder if I let the fact she was huge get to my head. She was a big girl. It was intimidating.

I do know that I now I have zero desire now to have a huge horse. I’m fine on my 15 hander’s, thanks! (Although Berry, you can get a little bigger, it wouldn’t hurt you…)

I have no regrets about getting rid of her, but every now and then, Dave tells me he wishes we hadn’t given her up. I remind him that I had to use a chain to walk her, that she kicked me in the arm, that she cribs, that I spent tons of money in vet bills, and basically that the moment she went in the trailer to her new home, I felt like a dark cloud had been lifted. He considers this, and then reminds me she was really pretty. Which is high ranking on reasons to get a horse, of course.

In the end, I don’t think she was a bad horse. I just didn’t know how to react to her, and in fact, I should have been proactive in dealing with her. I let the little things go, because I was used to Vintage being so good natured that it didn’t matter. It just turned out it did matter with this horse. I want to think of it as a learning experience, although I’m not interested in any horses like that again. All three of mine have kind, forgiving natures, and that’s what I will stick with.

Has anyone else had a horse that they could just not get along with?