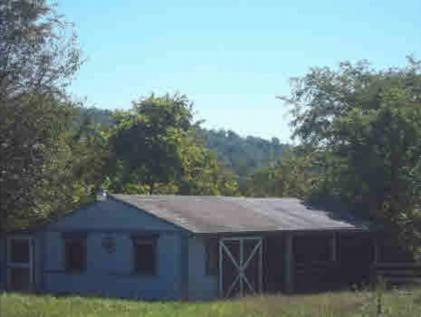 I’m a little bit creeped out by things in my barn now. There was a terror in there, it might have been a raccoon, but chances are equally great it was a ghost. It just so happens I was just talking to my friend about her ghost hunting adventure and I made a point of saying I don’t believe, so I wonder if something’s trying to make a point… just kidding, I don’t believe at all it was a ghost, but somehow, that makes it even creeper, since it is very real, with it’s claws, teeth, and rabies filled saliva.

Even though the event that led me to post this was last night, there’s a tiny bit of background that may or may not be relevant. I don’t know if this is related at all, but who knows!

In the last week, I noticed strange tracks in my hay storage. Something had been doing some serious digging all around my hay. Some of the prints seemed really big, like the size of a bear paw, but when I checked them out closely, there were no imprints of paw pads, and if I pressed down gently, it made an obvious print in the soft dirt, so it had to be something light. 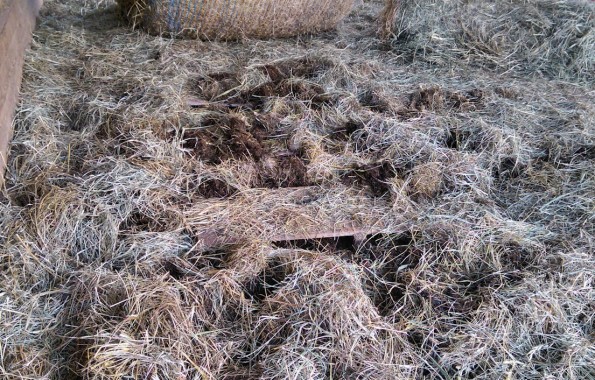 Overall view of digging. Normally, my hay area looks like a beautiful carpet of fallen hay.

I’ve found prints in there before this. I’ve found little deer prints, clearly they were enjoying a late night snack on my hay, and one time I think I found turkey prints, little bird feet, and I love those wild turkeys with all my heart so they are welcome anytime, but this time, there was no noticeable lines or distinctions in the print to determine what it could be. With all this rain/snow we’ve been getting, the ground there is pretty soft now, so I feel like something should definitely show up. Plus, what would be the interest in digging around? I’m thinking the animal wanted mice, so was trying to dig around the pallets for their nest. 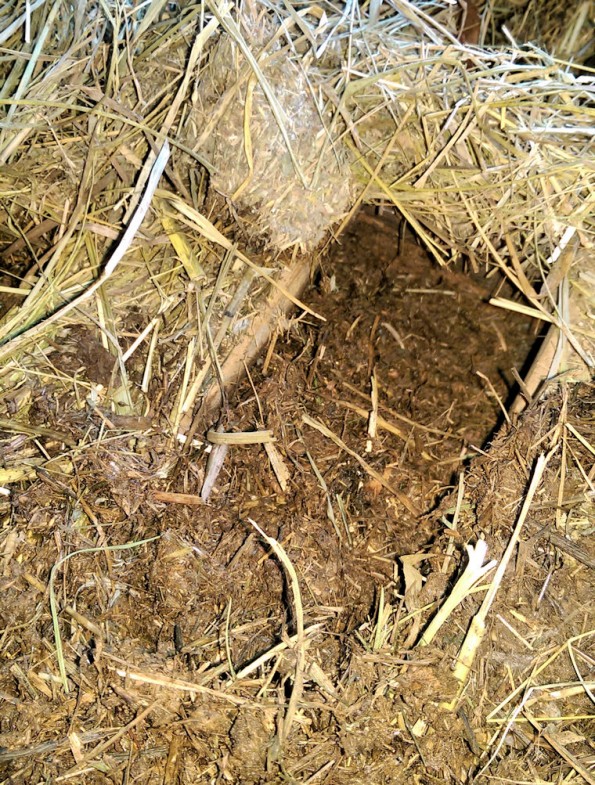 The digging between pallet slats

I told my trainer about the digging animal, and she suggested a fox. I don’t know enough about wildlife to determine if there’s other digging, lightweight, mouse hunting animals around, but fox seems like a pretty good answer to this.

Now onto to last night. Because of the rain, the horses were in most of the day, but I let them around 5 so they could stretch their legs and I could clean the stalls. Then I decided to leave them out for a while and bring them in late. So around 9pm, I went out there to get them.

I have the world’s crappiest flashlight, and normally this isn’t a problem because I’m not scared of the dark. And recently the moon has been so bright, and the snow reflects so much, that it might as well be daytime anyway. But last night, the moon wasn’t out, and since my flashlight is basically useless, I stumbled down to the barn in pitch darkness. I couldn’t even tell where the horses were, so I called to them occasionally, just because I like it when they walk with me down. They did not show up though, so I stumbled through the mud and darkness all alone.

My barn is basically two stalls, with an aisle on each side. One aisle becomes Pony’s stall when he’s here, and the other aisle is all the storage, grain, and tack trunks. I usually enter on this side, even though the light doesn’t work, sometimes I get the grain ready in the dark, and pass through Vintage’s stall to go to the light switch.

Since my flashlight was so awful, on this night, I opened the door and decided to turn the light on immediately. I was stepping into Vintage’s stall when suddenly it was like someone was playing the drums in the storage aisle, there was so much clanging and banging. I froze for about 2 seconds, like “Huh?” and then I realized that could only mean there was something in the aisle, less than 10 feet away from me, so I did the only logical thing and jumped out Vintage’s stall window. Not as graceful as that sounds though, because as I was lunging for it, I thought about the fact there’s mud on the other side, and I really didn’t want to splatter into the mud. So in trying to be careful, it made me more clumsy, and I just kind of slid my behind over the ledge. And then ran around the side of the barn to find the horses, and I tried to lose myself between them, as though they would shelter me.

They did the honking noise of, “What on earth…?” but didn’t move, so I was safe for a few minutes. After a few minutes of silence, I went to the barn door on that side, and slid it open, trying to use my crappy flashlight to see in. Of course, it’s a terrible flashlight, so it basically did nothing. I would have had more light if I had a single candlestick.

So with Vintage putting her head right behind me, making me feel brave, I slid in, and rushed the light switch. Of course, as often happens in these moments, it took me several tries to turn the light switch on. And then I got it, and light filled the barn.

But I was still a coward, so I opened the barn door and let the horses go to their stalls and investigate first. Since the doors into the other aisle were wide open, they wandered on in, and stuck their heads into that aisle, checking things out. Nothing hissed, nothing sprang out at them, so I grabbed a manure rake and went to investigate.

The animal was gone. But the grain cans were open, and it had apparently knocked over everything that could be knocked over, because there was a huge mess of things all over the floor. The medicine bottles, the supplements, the buckets, the gopher trap that had been on the top shelf.

I did some prodding with the manure fork, but everything seemed to be clear. The horses were staring at me, so I decided it was safe to give them their dinner.

I’m thinking that the animal was sitting in the grain, eating, when I came in. Then, it was startled, so it jumped up the shelf, knocked off the gopher trap, which is what made all the racket as it fell to the floor, hitting everything it had knocked over previously, then I guess escaped in the roof/rafters, which I did not think was possible, and is kind of creepy if there’s something living in the barn roof.  I was thinking that over as I gave the horses hay, and was a bit creeped out as I walked back to the house, even though it was unlikely something would attack me. Or is it?!

The grain cans are now anchored shut, so hopefully that will prevent further theft. I suppose I should put out a trap, but I wouldn’t know what to do with the animal if I caught it. It’s just being an animal. Hopefully the animal will leave on it’s own.

But I am no longer going to be going out without a working flashlight, because now I will be creeped out by my barn every time I go in it at night.