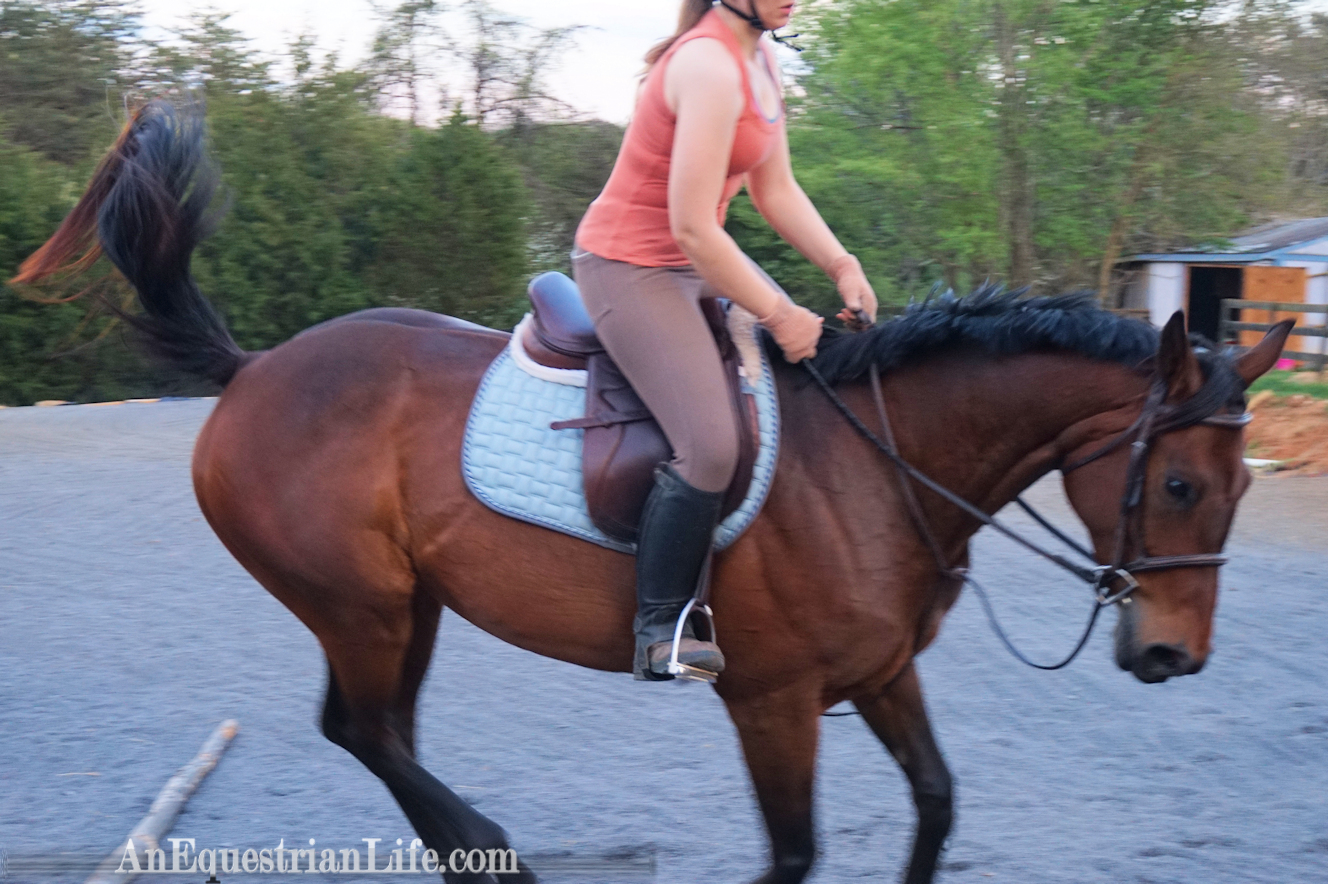 I’ve had a fun few weeks with Berry. Springtime meant she had to go into season. But, before that happened, I was happily having a lesson on her and discovered my trailer ramp handles were broken. The trailer had to be fixed, so that meant I couldn’t go anywhere for a while. While that stunk, I did have a super awesome lesson on one of my trainer’s horses. It’s good to be praised and told how great you are. That doesn’t often happen to me, so let me have this moment of glory, as I relive my amazing lesson, where I did jump after jump, and each time my trainer said, “Good job, Courtney!”

On the very same day I had my great lesson, I came home to ride Berry, and she was being rather squirrely, quick on her feet, and dropping behind the vertical. I thought that was a bit strange, but everyone has off days, including horses, so I wouldn’t hold it against her. I was just hoping it was only for that one day, and would not be repeated the following day, when I had guests coming over to ride. Naturally, I wanted Berry to be her normal, lovely, calm self, for everyone’s enjoyment.

And naturally, she decided she didn’t want to do this at all. She decided to become the witchest of mares. 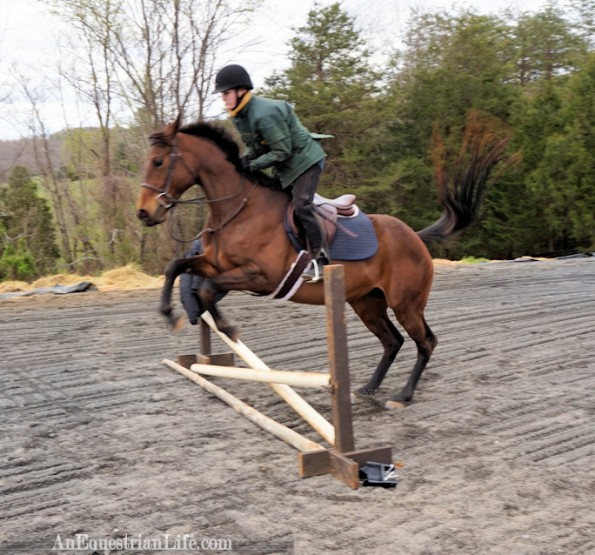 Sassin’ over a tiny crossrail.

Luckily D’Arcy is a great rider, although I felt really bad that I brought her over to ride, and then she ends up schooling my horse. Great way to spend a Saturday! 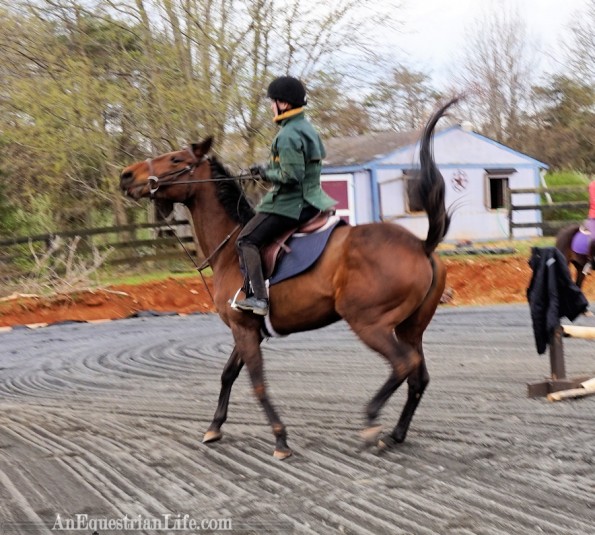 “Are you not entertained?!”

Meanwhile, to really rub in how bratty Berry was being, Pony, who had literally returned from training days earlier, was being the perfect little pony. 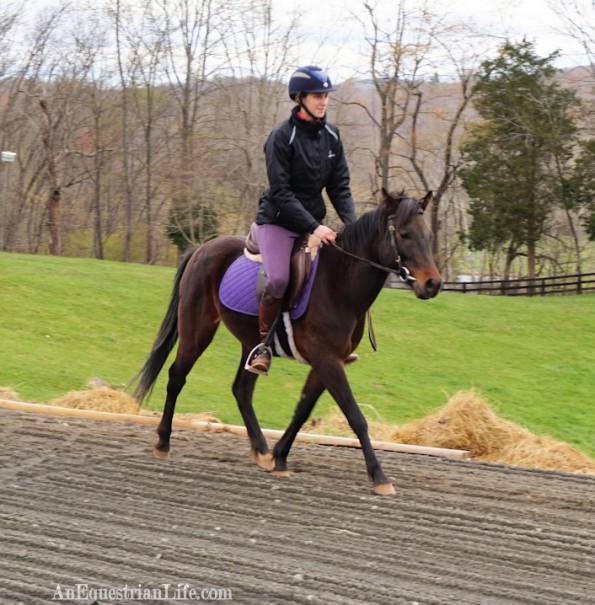 Olivia can now fulfill her dream of going under low hanging branches, something she’ll never be able to do with Frankie.

The next day, Berry didn’t get any better. She just kept dropping behind the vertical, being pissy, and over-reactive. She had gone into season, and she was raging. 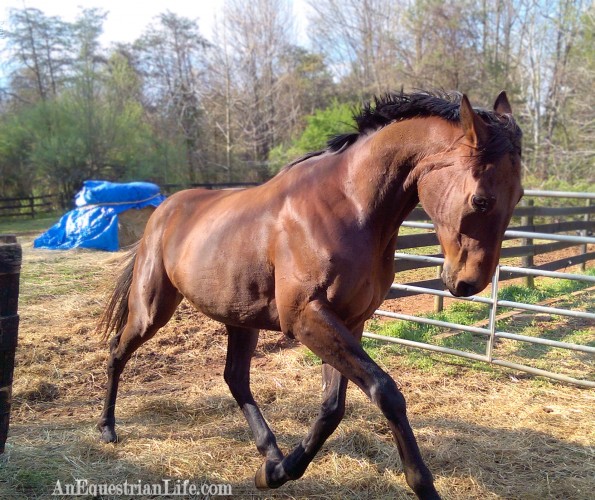 It may be an understatement, but I’m not the bravest of riders. It doesn’t take much to rattle my confidence, and not wanting to stop definitely scares me. I don’t want to be run away with! In the past, she has had moments where she acts green, or reactive, or obnoxious, but I take a lesson and then all is fixed. My trainer can talk me through anything. I also did manage to absorb some of what she said to be used later, but Berry’s never raged like this before, so I was intimidated. And now, since my trailer is broken, I can’t even take her to my trainer’s! Did you know it was out of commission and plan this out, Berry!?

To sum it all up, my trailer can’t be used,  so I can’t take Berry to my trainer’s to get her under control. I was a bit scared of my horse. But, I decided I won’t be scared of my horse, I’m going to get her under control. I absolutely refuse to be sidelined, waiting for my trailer to be fixed, and too scared to get on my horse.

Wishing I hadn’t mocked round pens days earlier, as that seems like it’d be super useful right now, I started with just lunging her, while wishing I had that round pen. At first, she was okay with that, but when I changed directions, she trotted along for like five strides, and then dead halt, reverse, and pulled against the line. I had even said to Dave, “I bet I’m going to regret not wearing gloves,” and sure enough, I regretted it. I dropped that line like a hot potato, and she raced around the arena, out the open gate, all over the field, and back to the barn. I think I violated like 10 pony club rules just there. 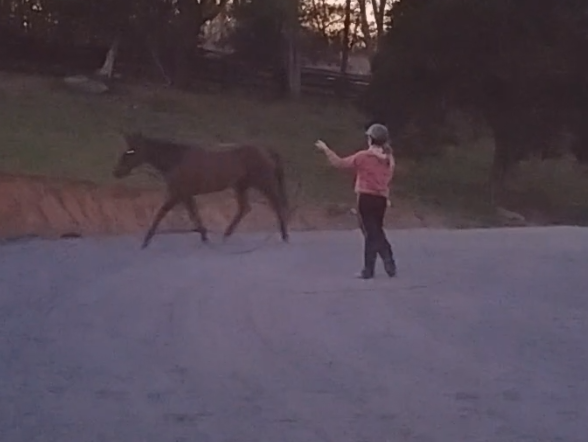 Dave did not get video of the incident, this is moments before, as I practice my conducting skills. Outfit of the day is black workout pants with a pink racing stripe, and my pink barn sweater. It’s possible Berry was offended by my fashion choices.

At first I was scared the line would catch and she’d be caught in the mouth, but those cotton lunge lines are seriously magic, and she didn’t catch on anything. She eventually stopped, actually in the same place where the raging photo was taken above, and stood there, heaving and panting, while I walked up to her. I didn’t want to, but I had to take her back to the arena, and lunge her again. This time, I got gloves and shut the gate, and while she was a bit wired, we managed to trot enough that I felt like we all learned a valuable lesson. Well, really, I guess I learned a valuable lesson. Berry realized that PMS gives you an excuse to act like a raging bitch, a lesson all us females learn eventually. It does come in handy when you just want to act like a bitch, and have no other excuses.

So now I had yet another thing that scared me, but I was thinking she can’t possibly be in heat that much longer, so I’m going to keep trying, because I REFUSE to be intimidated by this mare. Even though I totally was, but I was going to pretend I wasn’t.

The next day, I lunged her again, and she behaved. So I got on her. She was still acting squirrely, but she was mostly good. Mainly she was overreactive, and still dropping behind the vertical. Nothing horrible happened though, so while it wasn’t a very good ride, it wasn’t a horrible ride. That was encouraging.

Despite feeling the butterflies every time I was about to mount, I kept riding her, every single day. And every single day, the amount of “moments” decreased. Obviously she was going out of heat, but it made me more confident that I can control her, I can do this, keep at it. And I did. And despite before not knowing what exercises to do without my trainer, thinking for myself did make me start figuring out exercises, and what we should work on. 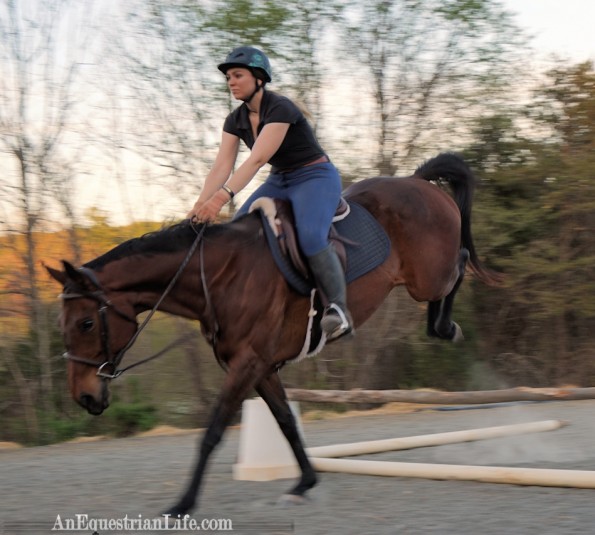 I still want my dang trailer back though, as I want to get back to jumping. Even though that jumping photo is above this paragraph, we haven’t done much jumping at all, because I do not feel confident jumping bigger than that tiny jump without my trainer there. I need her to guide me! I need her to get me in show shape! I miss the grids, flower boxes, coops and gates!

But I did accomplish something on my own. I’m pretty proud of this, as I’ve been working on it forever.

I DID FLYING LEAD CHANGES ON BERRY!!! 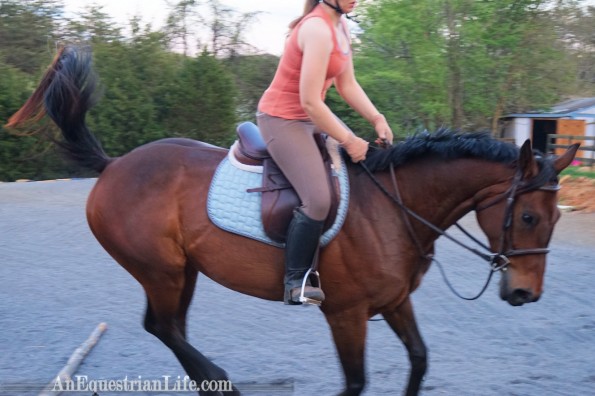 The tail flick is how you know it’s the change.

Terrible, zoomed in photo, but I am so happy about this.

Hurrah, for my springtime mare! It’s cool now, feel free to come back and ride her!

Tommy and the Cool Mule – A Movie Overview