I had my lesson on Tuesday, and it was pretty amazing. She was either super worn out still from the poker ride, or she really is just getting better. It was a good time to have a long boring talk about our relationship! (except it wasn’t boring, it was amazing!)

I’m having trouble remembering who’s blog I saw this on, and it is really bothering me. Someone had a post the other day that included the quote “Ride like you can’t fail”. I thought about that a lot, and resolved that needs to be how I ride. I need to ride like I can’t fall (which is my big fear I suppose).

I got on Berry, and marched on around the arena. I learned from my poker run that I just need to get moving, and start working with her, instead of loitering around. Get on, get moving, start working. 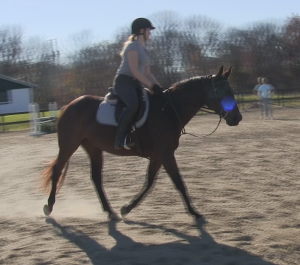 We did fine on our flatwork, and acknowledged some things that did end up tripping us up later. She likes to get long and flat, something I mentioned before, and everyone told me she needs to not be flat. So kudos to everyone for being right! 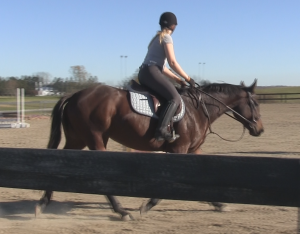 My trainer praised the flatwork I’ve been doing at home, so that gave me a nice happy glow. But I slump forward, drop her, and let her go flat, so I got a stern talking to for that. Something that was repeated much of the lesson. 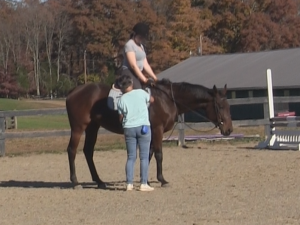 Chat #1 about my position.

I can canter, wheeeee!

And I’m also capable of turning! Everything is falling into place!

We started with a stone wall skinny. I feel like this was a scary jump to start with, and Berry certainly agreed, as she refused it initially. But, since I had no fear, it was no big deal, and I coaxed her over it next time. She refused again the opposite direction, but NBD. Next time she jumped it. And then after that, there were no refusals in her. I could tell there was sometimes a question mark in her brain, but she jumped everything. 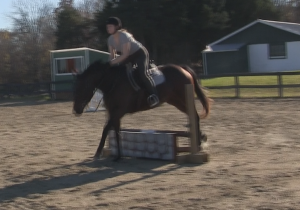 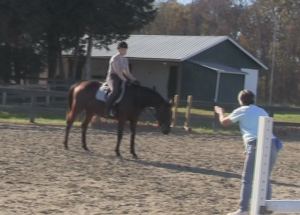 My trainer was running out of ways to tell me to stop doing the same thing.

Using an opening rein to stop turning stupid after the jump. 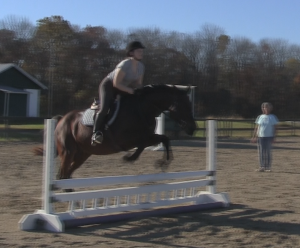 This was deemed satisfactory enough jump to move on to the next challenge… the line!

We moved on to the line. That’s where things got sticky. We started out jumping one, and then halting. It was an exercise in being firmer about the halt. Also, an exercise in shutting up, because she told me I talk way too much. I got that down (except talking is still a work in progress), and then we moved on to both jumps in the line, and I got it one way. 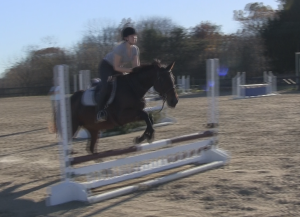 We switched directions, and then I kept falling apart. The first jump would be fine, 5 strides down I would be fine, but right before the jump, I would drop her and she would go flat. My trainer raised the jump in an effort to get my attention, and the first time over it, Berry crashed through it, knocking it to the ground. We repeated that line so many times. Enough times that Dave the camera man got bored and left, so there were no more pictures after that. It was quite an experience for Berry and I, jump after jump, after jump. My trainer told me that Berry had an excuse for not getting it right, as this is the most jumping she’s ever done, but I had no excuse. I think she was getting pretty frustrated with me. Eventually, we did a nice line, and we were allowed to end it there.

The take away: Sit up straighter, hold her up, and stop being so gentle. My trainer thinks I am a wuss, so I need to not be one. I need to be the leader, and show Berry what she needs to do, because she’s not going to magically know on her own!