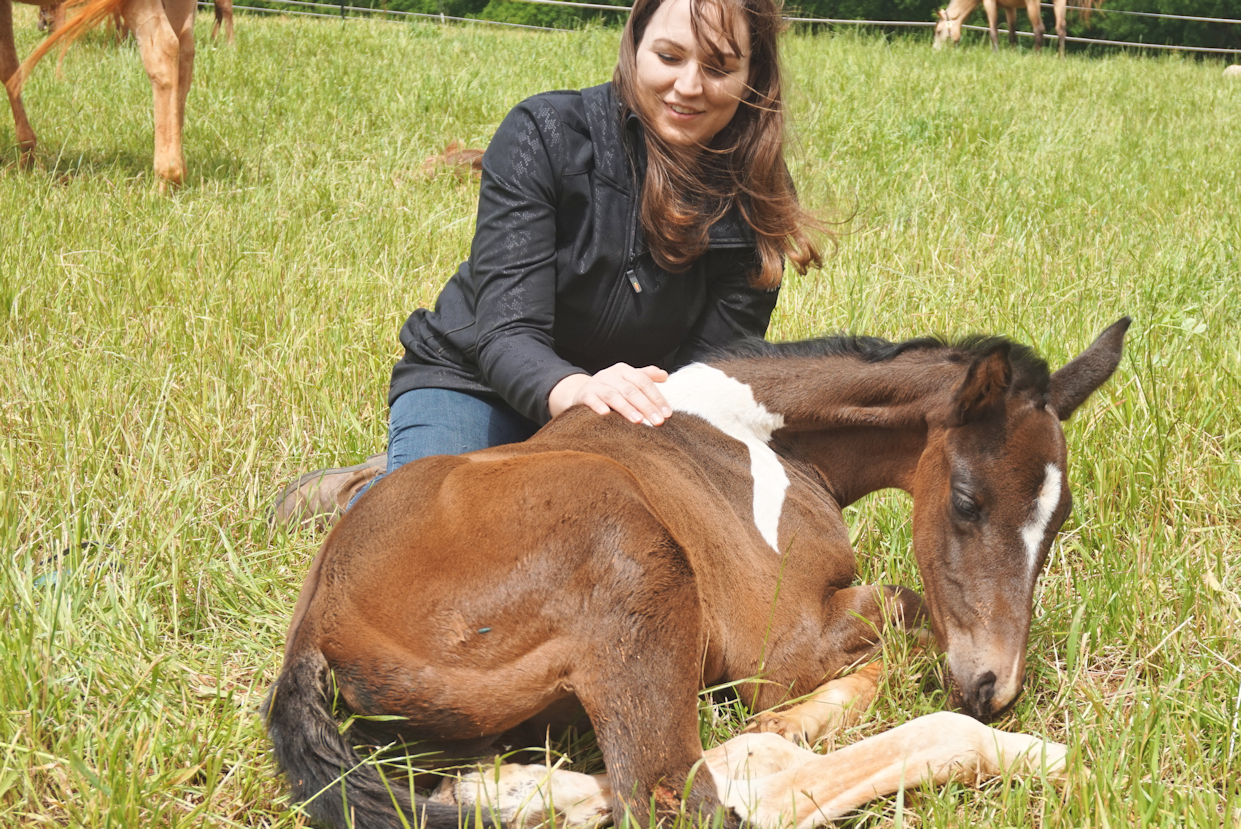 If anything could inspire me to have a breeding farm, it would definitely be going to a breeding farm. They are so incredibly cute, I want to be surrounded by foals all the time. I want to lay in the middle of the field and have lots of foals leaning up against me, like a foal pile.

When I was a teenager, my family raised sheep, and it was generally agreed upon by the sheep community that the primary reason to raise sheep is for lamb season. Watching them bounce around, call to their mother, stand on their mothers, play with each other, and just lounge around so cutely was the highlight of the sheep year. I imagine that is how some horse breeders feel, too. I mean, sure, the foals will become magnificent horses, but in the meantime, SQUEEE, look at the babies!!

I found this breeder a year ago. It was actually recommended on Chronicle of the Horse forums, and I checked it out, and thought, I’ll keep an eye on that one. I followed it on Facebook, and left it at that. As I researched more and more about what I wanted, this breeder just really caught my eye, and one day I realized that the farm is not too far from me. I truly do not know how I missed this detail, but for some reason, I thought they were out west somewhere. Once I realized I could easily visit in person, they became a viable option.

I made my way southward and found this landmark right near the farm. 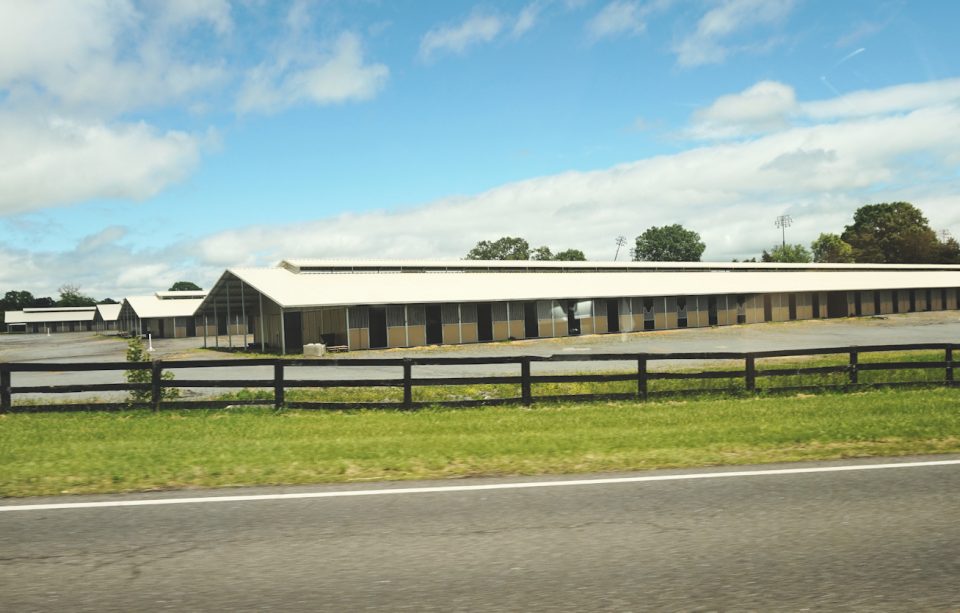 This is Commonwealth Park, aka, the home of HITS Culpeper. It’s also super depressing when there’s no show going on, and it literally looked abandoned/haunted. They could at least mow the grass!

The farm was huge! 150 acres and there were so many horses! I live in horse country, but I have never seen so many horses on one farm. It was the kind of place where they aren’t totally sure how many horses they have because there are so freaking many. But the farm was beautiful. All the horses were out on well-maintained grass, and it was clear they take very good care of all their horses. It truly is a great place for foals to grow up.

The first mare we saw was a thoroughbred mare named Berry. She definitely deserves a shout-out for having the same name as my horse, and also for being a thoroughbred. Both excellent qualities. 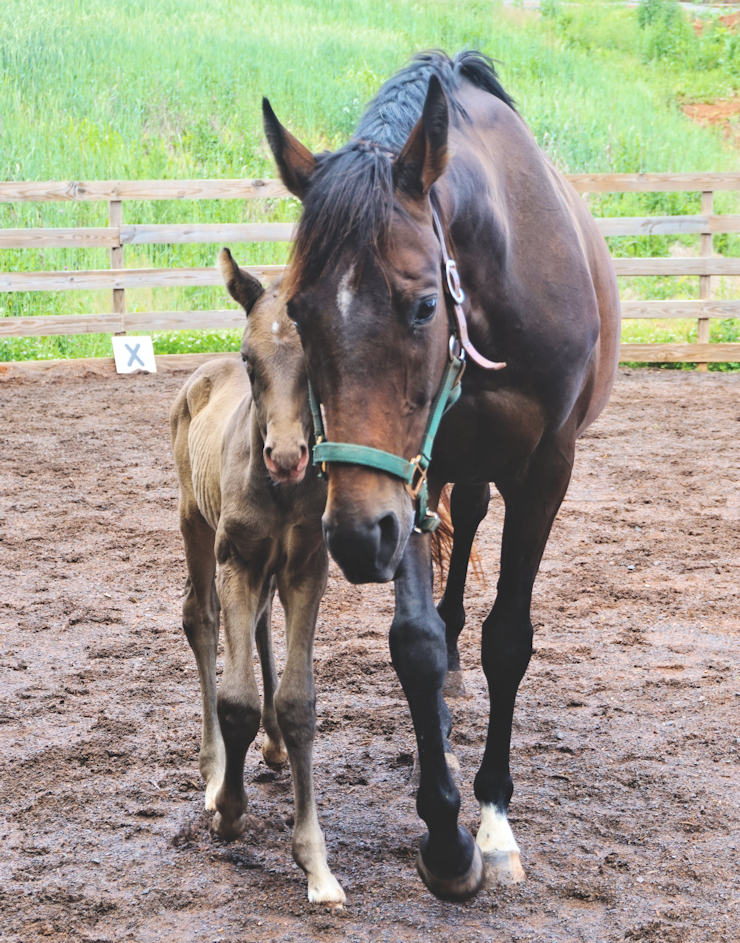 Similarities – They are bay thoroughbreds named Berry. Differences – Basically everything else. Also, this one has a uniquely colored foal, my Berry definitely does not.

Berry’s baby was only about 3 days old. So tiny and cute! He was too young even to be out with the other mares and foals, so they were hanging out in the arena. After checking them out for a few minutes, they were relocated so we could see one of the big men on the farm, their stallion. (One of their stallions, I think they have four total).

He is in training at a dressage barn, but he’s back at home to bred to the mares that have already given birth. As soon as they brought him in, I was in awe. He is a very impressive guy!

He stood for us for a few minutes while we checked him out, and then he was released to strut his stuff. He determined that the immediate course of action was to sniff poop, so he did that for several minutes first. 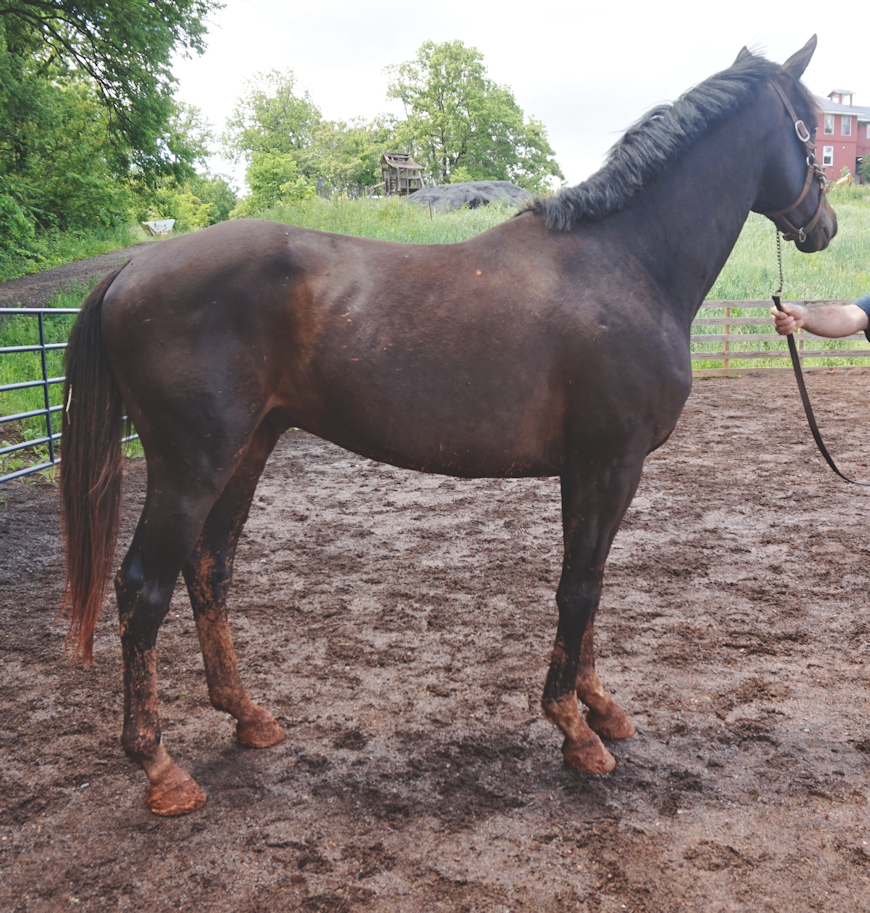 I’m planning to edit the video I got of him, but for now, pictures will have to do.

After viewing him, it was time to look at the foals. It was a field full of foals. Sadly, my picture of them en mass came out really blurry, but there were 10 foals out there, looking so adorable. 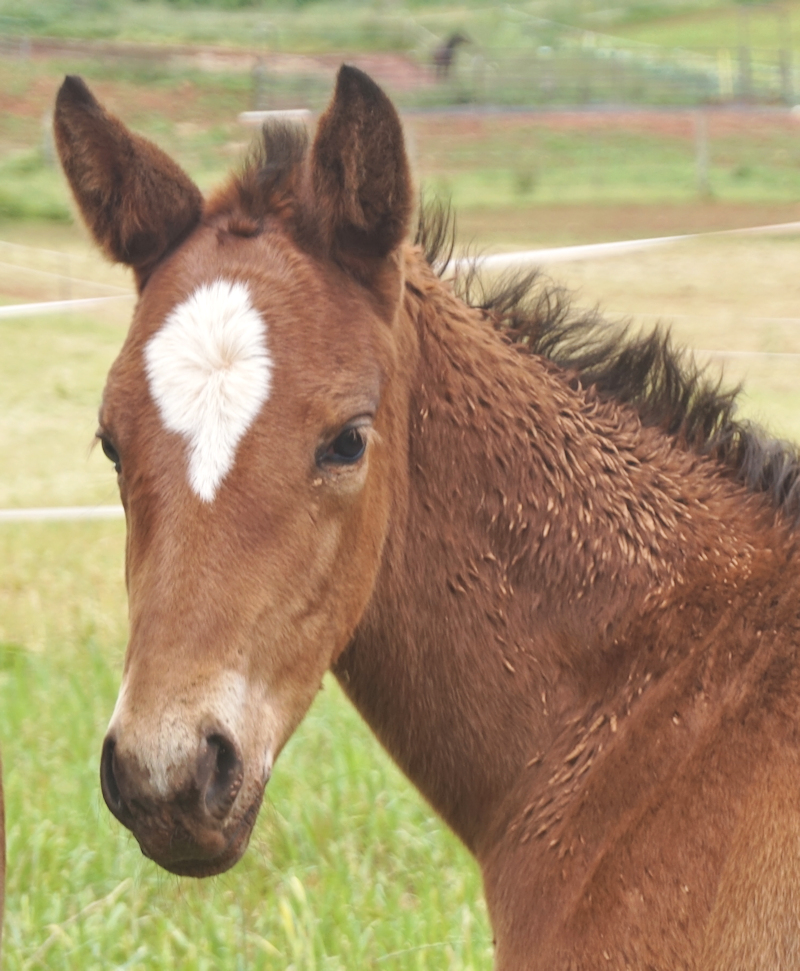 The ones we looked at were all daughters of the stallion above. They were all so adorable, and their moms were lovely – I wish I could take them all home! 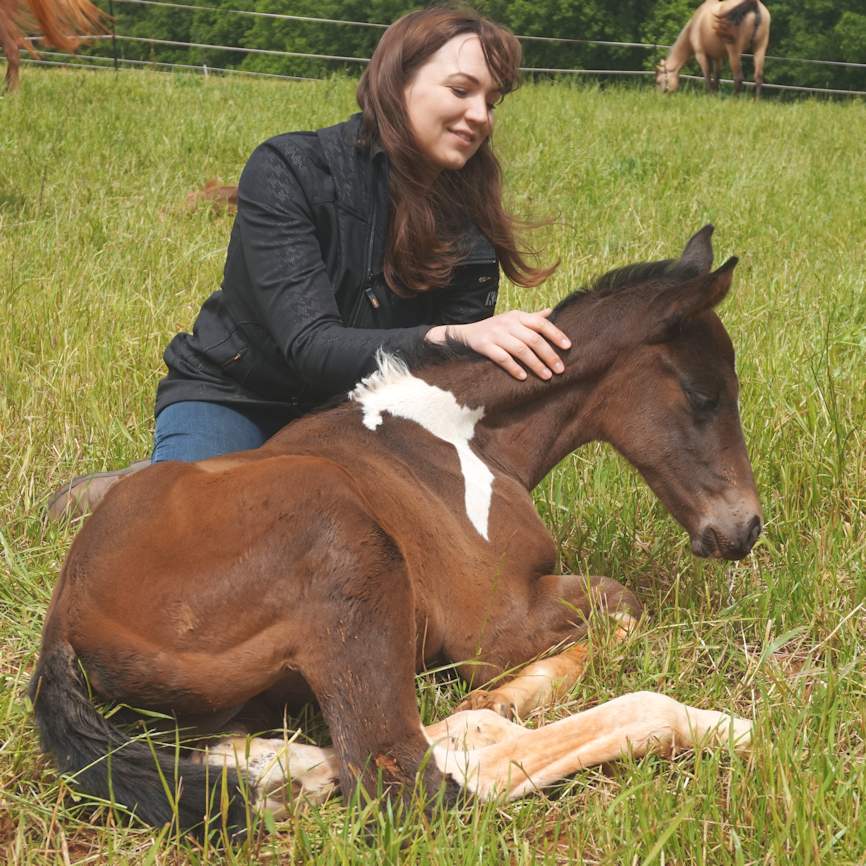 Although suspicious at first, this one was the only one that let me pet it, while laying down no less. I was tempted to get this one for that reason alone. 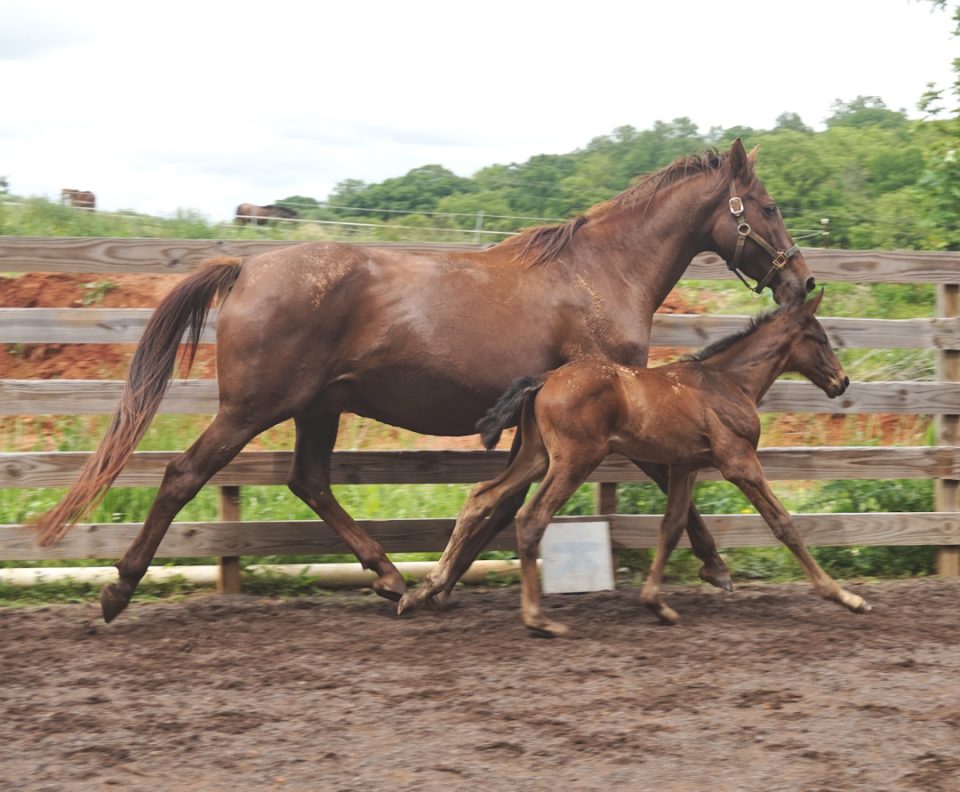 After viewing our favorite foals, they showed us some of the yearlings to get a sense of how the foals will develop. Keep in mind – these are yearlings, and yearlings are awkward. No one wants to be judged by their awkward adolescence! 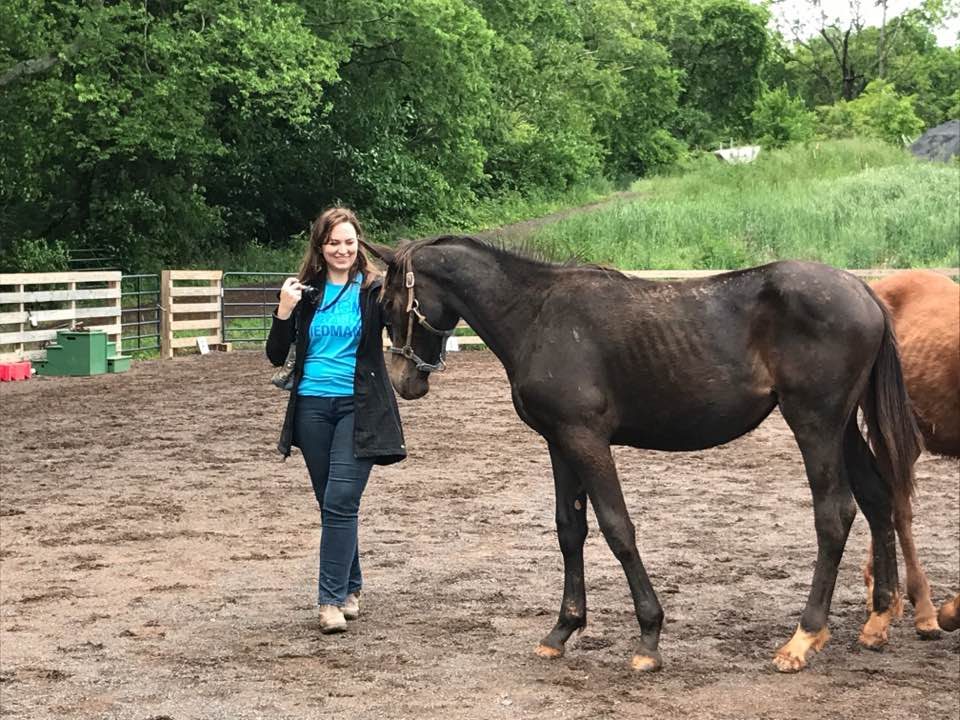 My original interest was in a foal that would have the same breeding at this dark bay filly.

They were such puppy dogs! They just love people! (which was actually true of every horse on this farm. I asked them about it, and they said they only keep/breed horses with personalities that they like.) 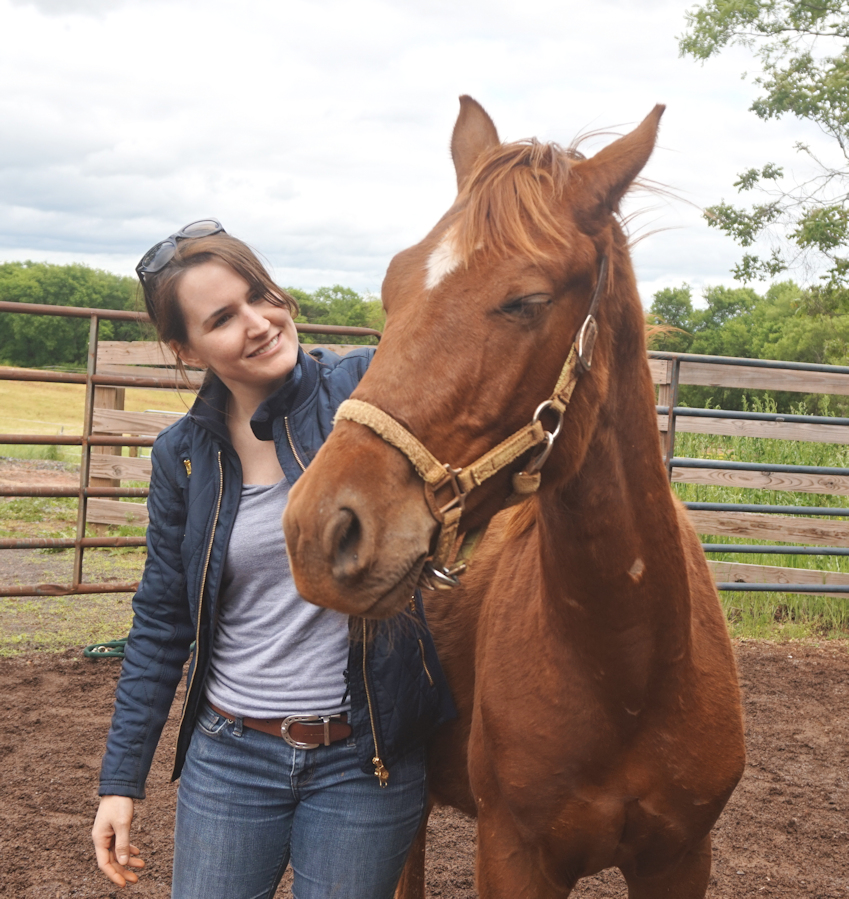 All about the itches here! 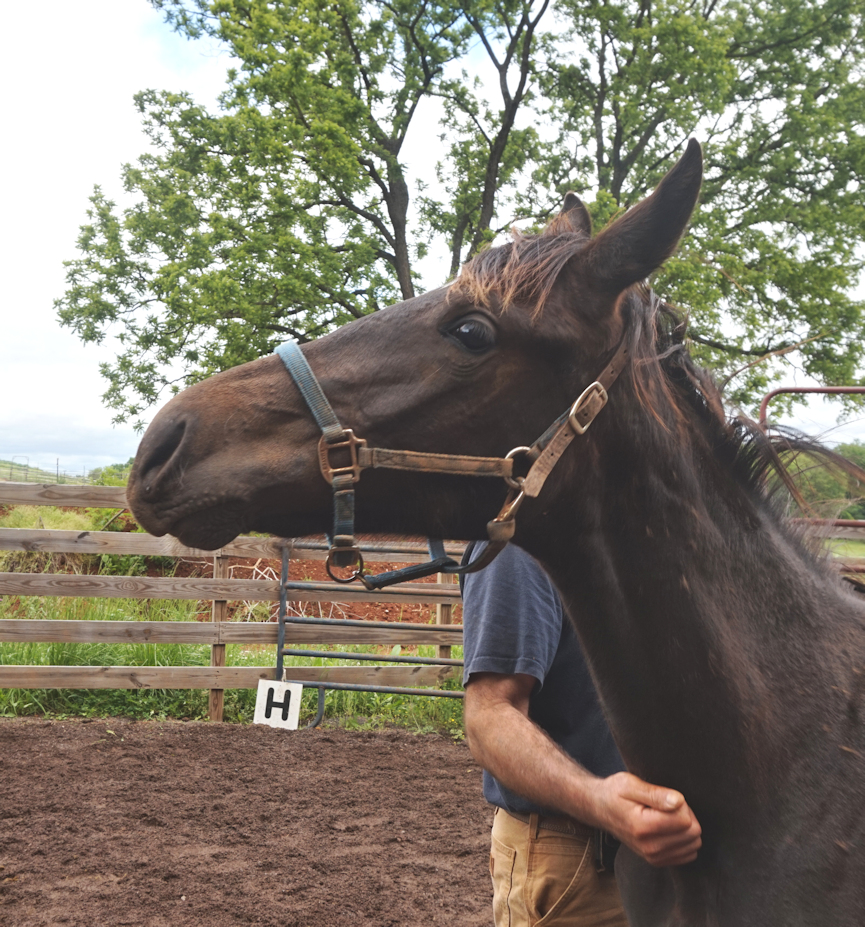 We moved on from the yearlings to the older mares’ field. It was a mix of 3 year olds and older mares, I assume to babysit and put those young whippersnappers in their place. Once again, super, super friendly. 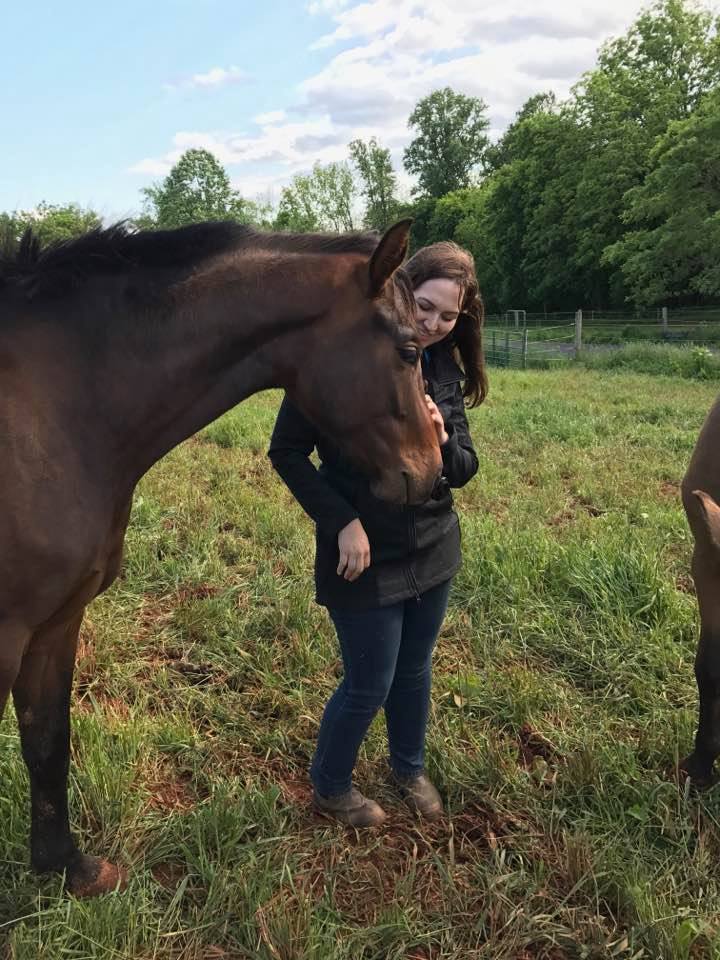 Half horse, half puppy dog.

We were introduced to the stallion’s full sister. It’s interesting how they are related, yet they look so different. As the breeder put it, same frame, but very different finish. (granted, not super easy to tell when in an uneven field and not square). 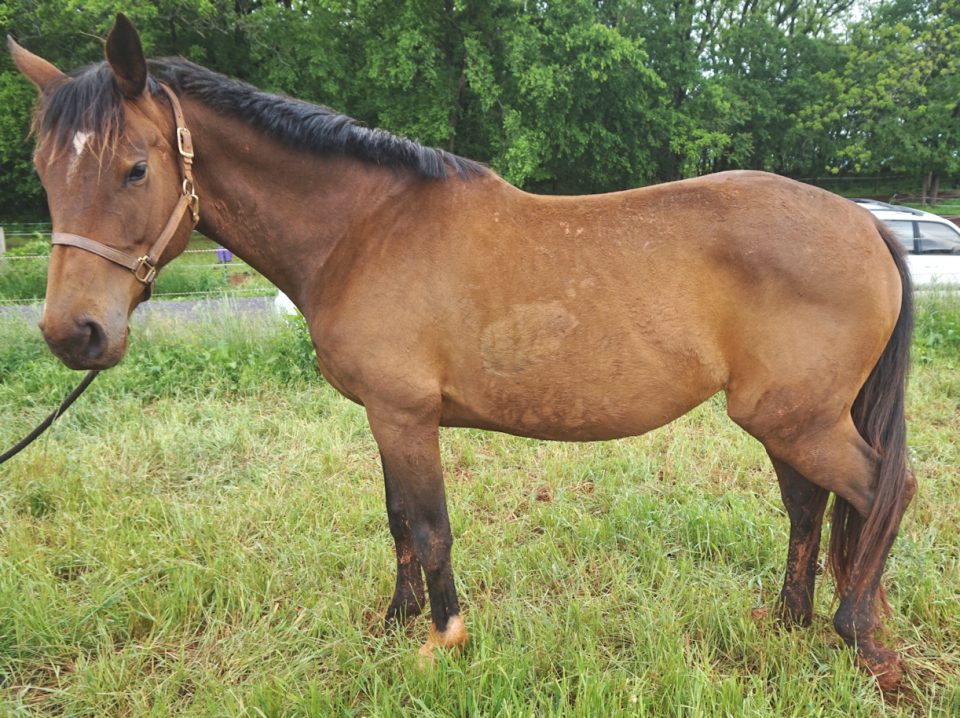 Her foal was the one I was originally interested in – The dark yearling above is her daughter. She’s not pregnant, they did embryo transfer with her.

Our final stop was the field of mares who were giving birth soon. It was a field of adorably chubby mares. They got a bit excited when we showed up, and galloped as fast as their fat pregnant bodies could carry them. 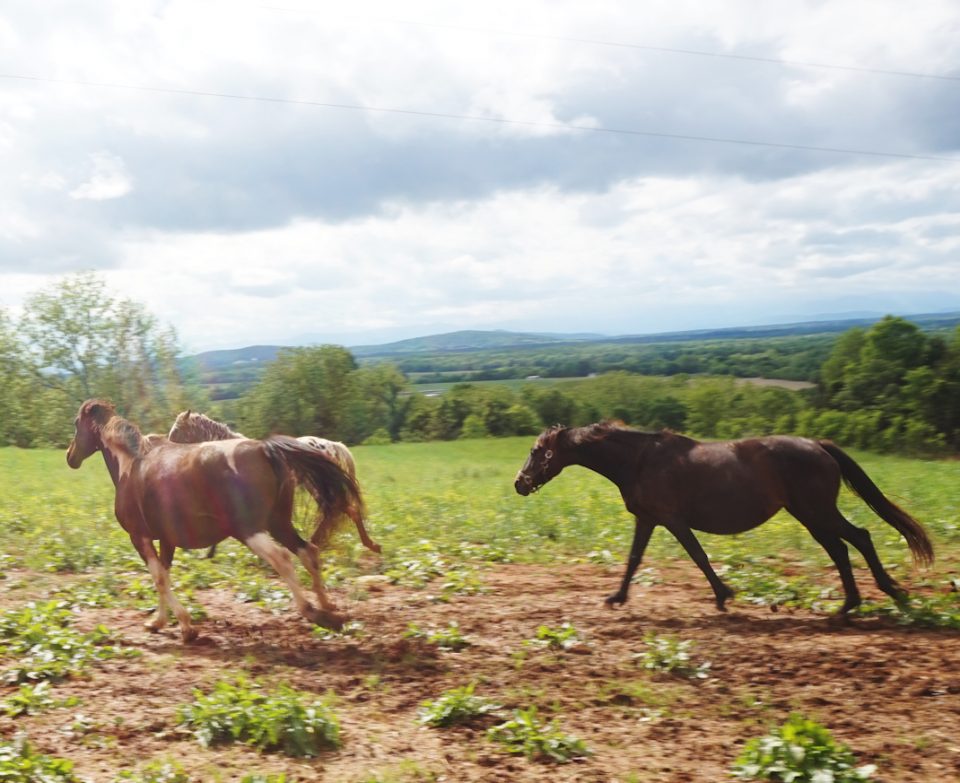 So much weight to carry…the one in the back looks like she’s trying to hard to keep up. 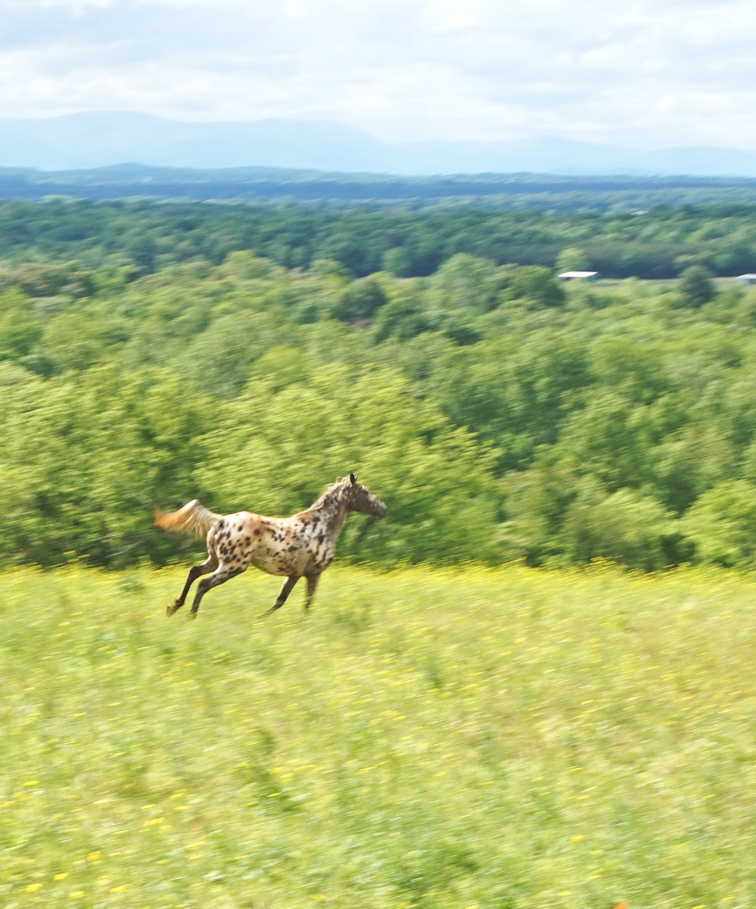 This appaloosa was definitely an instigator!

That’s when I met my unicorn mare, and fell in love. 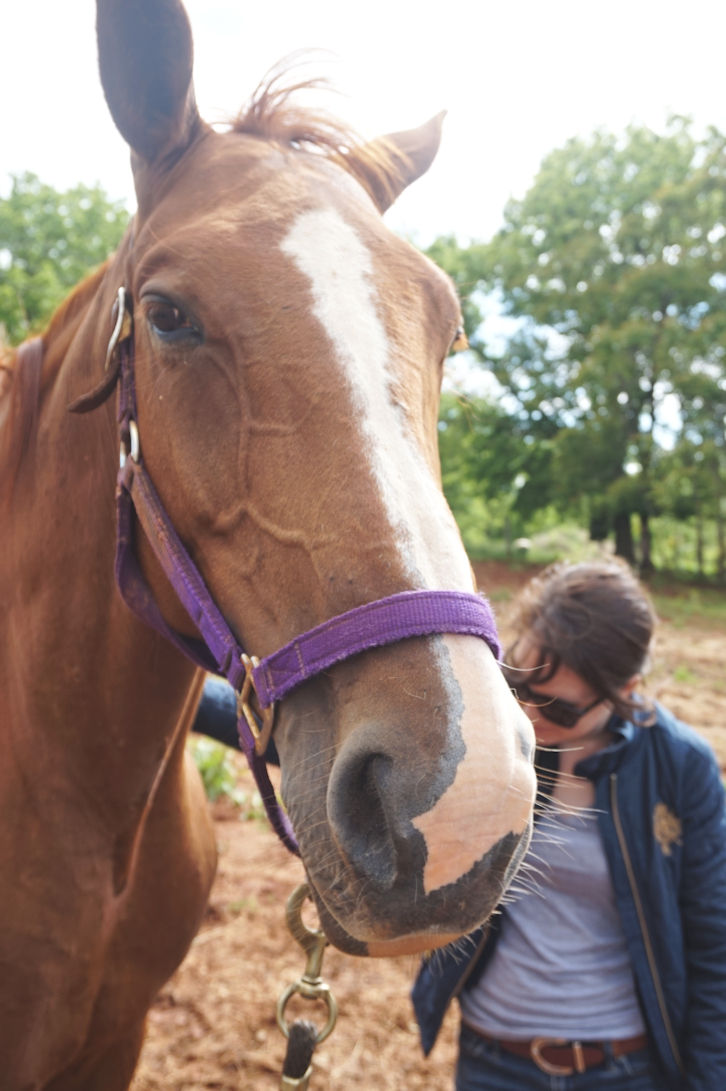 I do want to point out that while I was very impressed by this mare in person, I didn’t make the final decision until much later. I purposely didn’t want to rush into any choice. I went home and researched her and her lines before coming to my final decision.

I was really happy with my experience so far at this farm. The owners were very knowledgeable and informative and didn’t try to sway the decision one way or another. They answered everything we asked and admitted they weren’t sure for things they couldn’t remember (mainly relating to a specific horse’s lines…they told us they’d have to look them up to be sure, there’s a lot of horses to keep track of.) They were up front with how the registrations they could assist with, and which horses are only eligible for half registration. They spent three and a half hours with us, showing us horses.

Fingers crossed that everything goes according to plan!