I haven’t finished talking about horses this week, but I’m taking a break from horses to talk about chickens.

My little baby chickens are growing up. Luckily my neighbor took some of the chicks so I only have 6 of them now, but that is actually more than I expected. I certainly didn’t hope for their untimely deaths, but usually one or two of them don’t make it, for whatever reason. But these chicks are survivors, and there was not a single death. They are now in their teenager years, rebelling against authority, hiding themselves in their little room, and having parties when they think they adults aren’t looking. 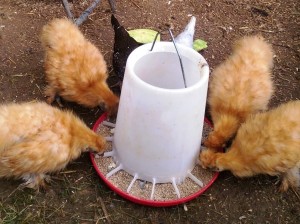 Also pigging out on food.

Sadly, being a teenager isn’t all fun and games. These poor chicks are plagued by an issue that effects many teenagers – Bullying. They are pecked, and chased away from food, water, and the door to the coop. And this is done by someone who should be protecting them, an adult. This adult to be exact:

Twank, a hen, hardly bigger than the babies she is picking on.

Twank has abandoned all normal chicken activity to stand guard over the various resources, for the sole purpose of chasing the kids off her lawn. Prior to this, she has shown no hostility towards any other chicken, and has been one of our favorite little hens. I think I may have triggered her anger though – A few days ago I found her sitting on a single egg. I moved to collect the egg and she started hissing and snapping at me, defending her one egg. I was intrigued by her sudden maternal instinct, but I can’t be shown up by a chicken, so I moved her and took her egg. Noticing the anger in her beady little eyes, I wondered if she was going to dwell on this long, or move on with her chicken life.

Apparently, she took the former option, and decided to express her anger at being denied her chance at being a mommy by harassing baby chickens. Seems the logical thing to do.

Now any time spent outdoors is punctuated by the shrill cries of chicks as Twank attacks them for daring to show their tiny faces. The only positive outcome of this is that the babies have decided I am their savior from this evil hen, and now they all run to me when they see me. They even let me pick them up, despite spending next to no time taming them during their young life. Since I really like friendly chickens, I’m not sure if I should be mad at Twank or not. But then I feel like that insane mother in Carrie, trying to convince my children that I am the only one in the world they can trust. Yes, little babies, come to me and see how I protect you. The world is much too big and scary out there, you should just stay with me for-ev-er.

And now, just for an excuse to show another chicken picture, Fluffers is a good mother hen. I think she is strict, but fair. She allows the babies to eat with her, but if they get too loud or get in her space, she pecks them. Seems like a reasonable response, I would do the same thing to my children.

She is a just and fair overlord chicken.

She even puts Twank in her place, pecking her when she goes after the chickens. But Fluffers is a busy hen, and doesn’t hang around the coop. She will supervise when she’s in the area, but with her busy social calendar, grooming obligations, and personal hobby of investigating what is under the mulch in the garden, she just doesn’t have the time.

Watching the chicken interaction, I noticed one of my rosebushes has a single rose. But it is the most perfect rose ever. 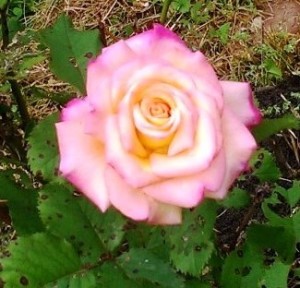 Really had nothing to do with chickens, just wanted to show my perfect rose. Please ignore the chewed up leaves. That’s um… photoshopped… and should not distract from the most perfect rose.

Since my teenager chicks seem to be surviving, despite Twank’s attempts to destroy their personal self worth, I need names for these little things. Every one of my chickens is named, and these ones will be no exception. There are four buff silkies (that I cannot currently tell apart), and two others of unknown breeding, a gray, and a rusty brown one.

Any suggestions for names? I’m running out of name ideas here!