Continuing on an awesome Memorial Day weekend of horses, on Sunday, the horses, Dave and I took a field trip to James Long Park in Haymarket to meet the talented rider, super fun, amazingly awesome in every way, Olivia of hellomylivia and take her on her first official trail ride! If you don’t already follow her blog, do it now. You won’t regret it!

Berry acted like a total weirdo the whole way there, and insisted upon resting and rubbing her head on Vintage in the trailer. Vintage, every the perfect lady, tolerated it in front of people, but later immediately bit her on the neck when I turned them out. Vintage is like an elephant, she never forgets. And just like an elephant, she stampeded at Berry and the innocent Pony, snapping at them both like an alligator. But just like some other forgetful, mindless animal (a lemming?), I suspect Berry will not have learned anything.

Introductions were made, and my Dave and Olivia’s manfriend immediately set up camp and bonded over man things. They were very involved with this, to the point of not noticing (perhaps on purpose??) when I needed one or more of them. Although it did give me an excuse to shriek like a banshee to gain their attention, which is by far one of my favorite pastimes.

James Long Park is equipped with a fairly decent riding ring in addition to their trails. Fun fact – the first time I ever meet/rode Vintage 12 years ago, it was at this ring. Except on that occasion, she was the one screaming like a banshee and dancing around like she had ants in her pants. But it was love at first sight, and I bought the naughty creature.

But back to the present, as close as that can be when it was three days ago, Olivia popped right on Vintage and set off around the ring. They got on like peas and carrots, went around the ring and popped over a few jumps. They looked great!

I got all sentimental watching my little mare being ridden. Olivia was so great with her, and I loved watching Vintage jump. It is possible I am a huge dork for this, but Olivia, come jump my mare some more. She loves it so much! She needs to be jumped!

Meanwhile, over in green horse land, Berry was doing her best impression of a freight train. I hadn’t been riding Berry this year because of her hind abscesses, and then a bizarre swelling that the vet couldn’t figure out, so other than testing out a new saddle, this was her first actual ride of the year. But since Berry either does not have a mean bone in her body, or is just too lazy to show it, her green horse antics consisted of rounding up in the canter in mini-bucks, and ducking behind the bit and pretending she had no brakes. But this only lasted about 10 minutes and then she was so tired she was ready for a nap.

With Berry sufficiently worn out, it was time for the trails! I have no pictures of the trails, but they were delightful. It was a mix of terrain, forest, hills, open land, some bridges we avoided, a massive drainpipe, and streams. My horses are not shod, so we did not attempt the stream. It looked pretty rocky.

There was much cantering over the manicured lawns, and when we returned to the trailer, our men got some pictures. 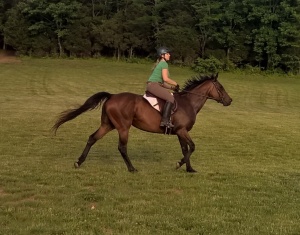 I call this “Modified fetal position.” 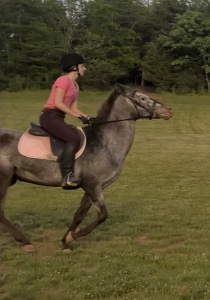 Olivia and Vintage were perfectly coordinated in tones of pink, but Vintage still decided to pull this weird giraffe thing and ruin the whole look! 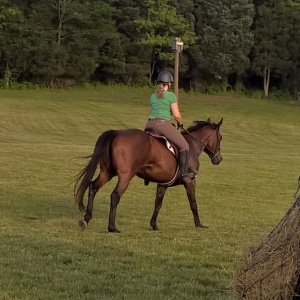 Even though this looks like a bizarrely slow motion walk, it is actually a canter.

I think Vintage was having way more fun than Berry.

It was so much fun riding with and getting to know Olivia! Hopefully we’ll be able to work out another excursion that will involve lots of cantering, and perhaps some jumping will fit in there somewhere!

Hopefully this has opened a whole new world for Olivia.