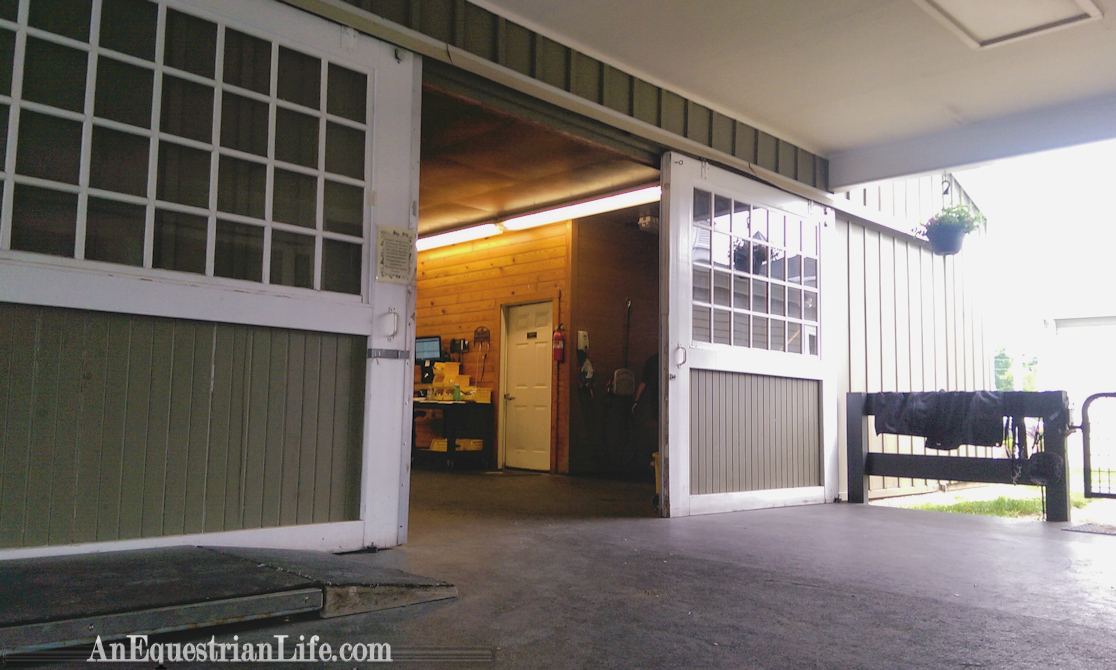 Back in December, I mentioned that Vintage had jumped out her stall window when I took the other horses off the property. She had some stall rest, she got a general lameness check by the vet, and she was declared pasture sound, but not sound for riding, although she was improving. It’s possible if I just kept waiting, she’d eventually recover, but of course, it’s not a definite. I was reluctant to get a full work up on her because she’s 19 years old, semi-retired as it is, and I have two other equines to work with. I was thinking I was content for her just to be a pasture buddy for the rest of her life.

Except when I actually thought about it, I didn’t want her to be retired. She’s already trained, she’s good, and she’s fun. I decided to just bite the bullet, and get the official diagnostic of why she was lame. The symptoms she had were a buildup of fluid just above the fetlock joint, major stocking up when stalled, and of course, she was off.

I made the appointment to go to my vet, because they already have all the equipment set up, and thus would save a teeny amount of money. This proved to be the best idea, because if she had been looked at again at my house, I am confident we still would have zero idea of what was wrong with her. My vet’s great set up was definitely needed for evaluating this horse. 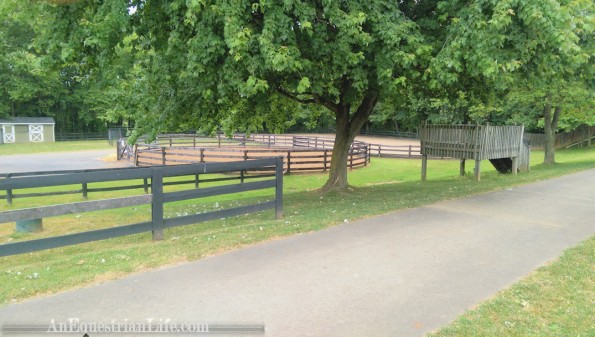 Paved path for lameness evaluation, round pen, and riding arena. Also a raised platform, to lord over all the peasants below.

In a coincidence that is possibly only vaguely a coincidence, my vet is located directly next to the livestock auction that I got Vintage at way back in 2003. I didn’t live in this area when I bought her, but it makes sense that I’d keep seeing the place I got her from when I live in the same town. 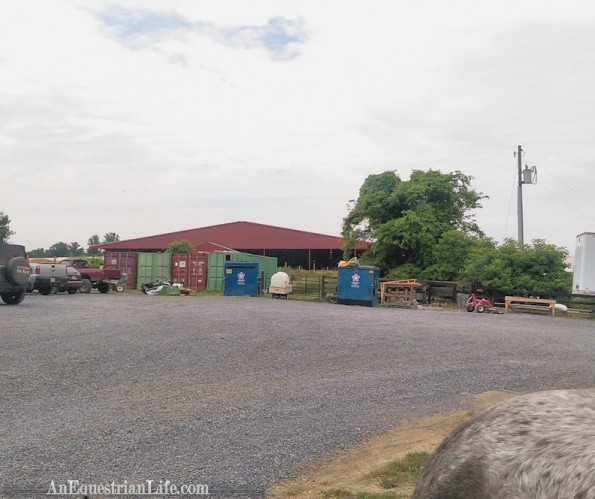 (Red Building) This place was extremely dumpy back then, but I think they have cleaned up the place since then. It certainly looks nicer on the outside. (The front outside, this is the back of it) My vet said they don’t sell horses there anymore, mainly farm equipment.

One of the nice things about going to the vet clinic is as soon as I arrive, the vets swarm and take Vintage literally off my hands. They wanted me to be able to watch everything, so Vintage was always tended to by at least one vet technician, sometimes several. 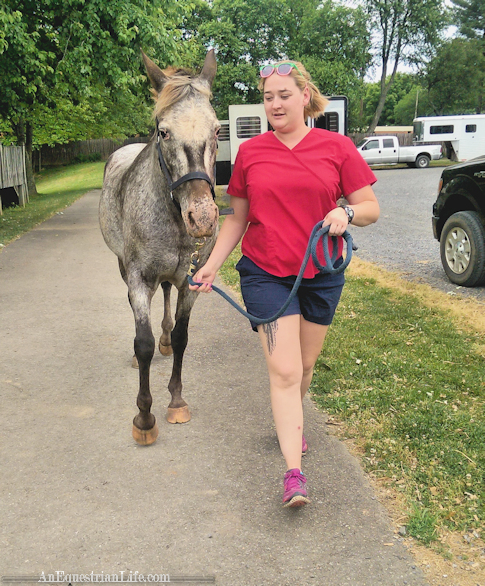 One of the delightful vets. (I think Vintage is shrinking in her old age… I have never noticed before how tiny she looks than I did from this visit. I guess hanging out with slightly taller Berry has changed my perspective.)

Upon arrival, they did a flexation test to see where she was at. Without the flexation, she was 1/5, but after being flexed, she was dead lame, didn’t even want to put weight on it for the first few steps. My vet thought she had improved greatly since the last time she saw her, but she was clearly very, very lame. We figured she would be, and it was time for xrays.

They started with the fetlock/cannon bone area. Everyone thought this would be extremely straight forward, after all, that’s where the puffiness in her leg was. 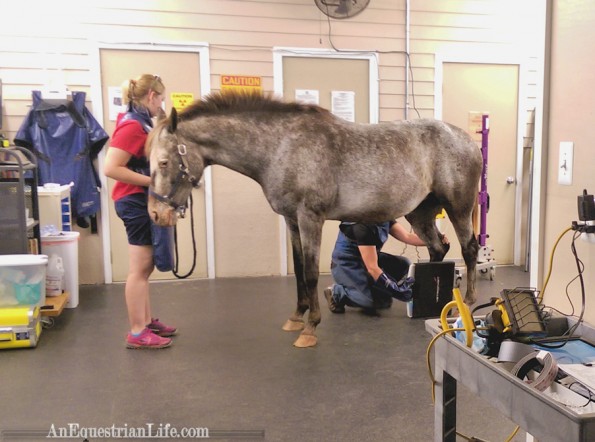 We all trooped on back to the viewing room to examine the xrays. She had a very old injury, a broken splint bone, and I traced that back to when I took her to a new boarding facility 5 years ago. The vet team said that was not the cause of her lameness, horses frequently broke those bones, and it was not a needed bone. But other than that, her xray was impressive, especially for a 19 year old horse. There was no arthritis, no chips, no roughening, there was nothing wrong with her.

Next up was the ultrasound. The technician searched all over her leg for a source. 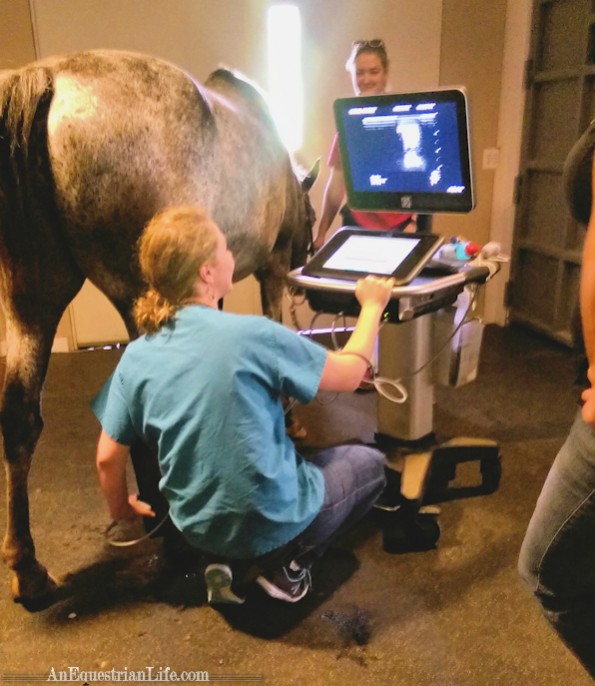 The vets all conferred with one another to discuss the next strategy. They decided the next step should be to block the fetlock to see if it even if the fetlock. So she was injected in the joint with a blocker, combined with a steroid, that way if that’s what was wrong, it would be treated.

After waiting for it to take effect, we went back out to trot it out. 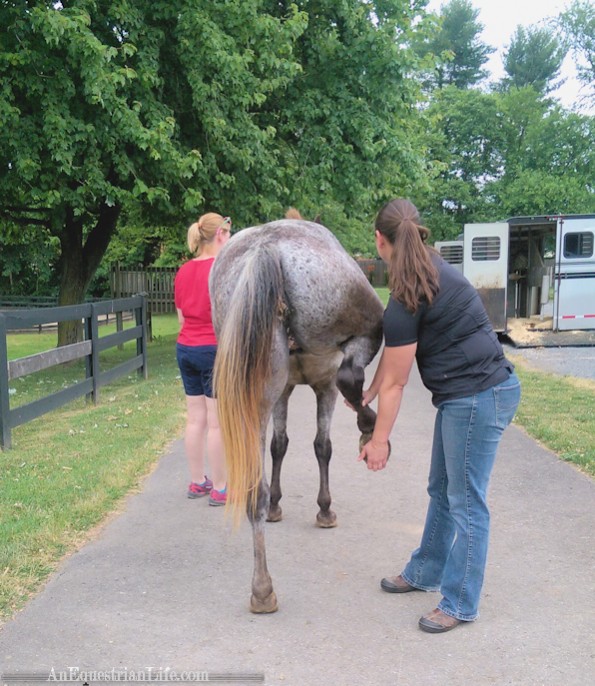 She was still lame, although marginally less lame. They decided to look at the stifle next. They xrayed, and looked, and there was nothing wrong with it. All the vets conferred again. 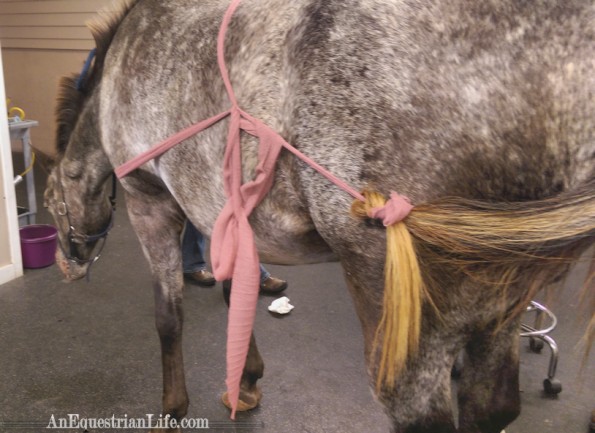 After hitting me in the eye with her tail, her tail privileges were taken away.

They blocked the stifle this time, and trotted her out again. 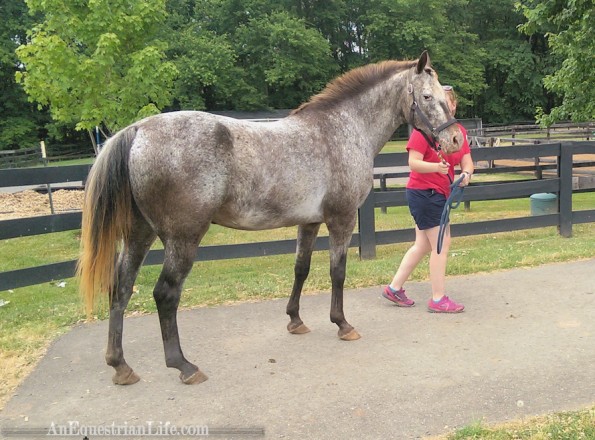 She was still lame, although much less so. The vets all gathered to discuss again, and the decision was made to xray her hoof.

They took a multitude of angles, and finally, they found something that looked abnormal. On the coffin joint, there was an abnormality. They took more xrays, just to be sure, and it was still there. They weren’t quite sure if that was causing her lameness, but it was the kind of abnormality that could cause lameness, so they decided to treat it. They injected the coffin joint with something (not sure what), and whisked her away to bandage her up. 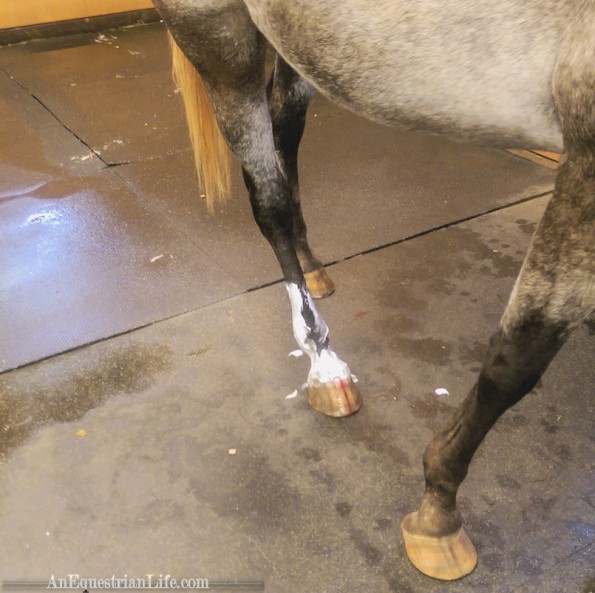 She got to hang out for a little bit while the tranquilizer wore off, and my vet and I discussed the plan for her moving forward. Since they still weren’t 100% sure that was causing the issue, they would need to come check on her in about a month to see how she was doing. In the meantime, if she seemed to be moving okay, she was cleared for walk/trot riding. If this treatment doesn’t help, well I guess we will be back to the drawing board. 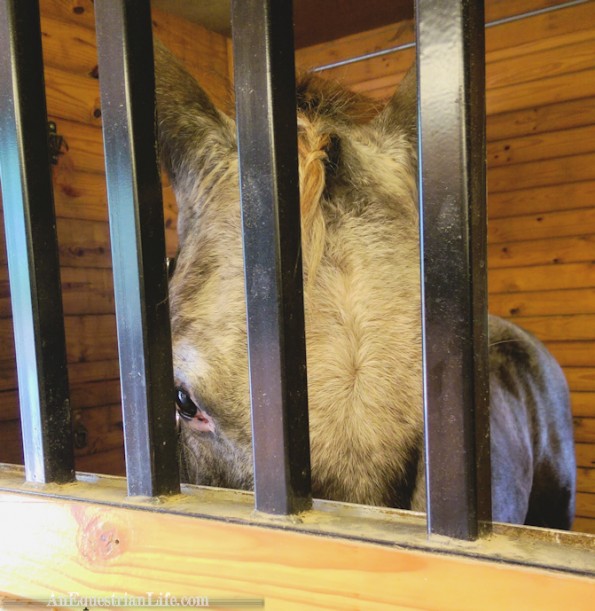 Vintage waits to be released.

We were there for 4 hours. Though a lot of it was spent either waiting for tranquilizers to take effect, or tranquilizers to wear off. When we left, Vintage had a huge bulky bandage on her leg, intended to “sweat” her a bit, since everyone had been messing with her leg so long. She was stalled for the rest of the day and night, and in the morning, I pulled the bandage off with great difficulty. That thing was really on there, I’m very impressed. But her leg, which usually would be stocked up, was tight and firm. I let her out, and she rejoiced her in freedom by trotting across the field, and I could see she was still off. But, the vet said it would take up to a month to see the results, so we will see. I stalled her again the next night, and was wondering how her leg would fare without the sweater, but shockingly, once again it was tight and firm. I’m taking that as a good sign! And also a sign that I need to learn how to wrap like that, because it truly is magic.

How to Pick Up Chicks