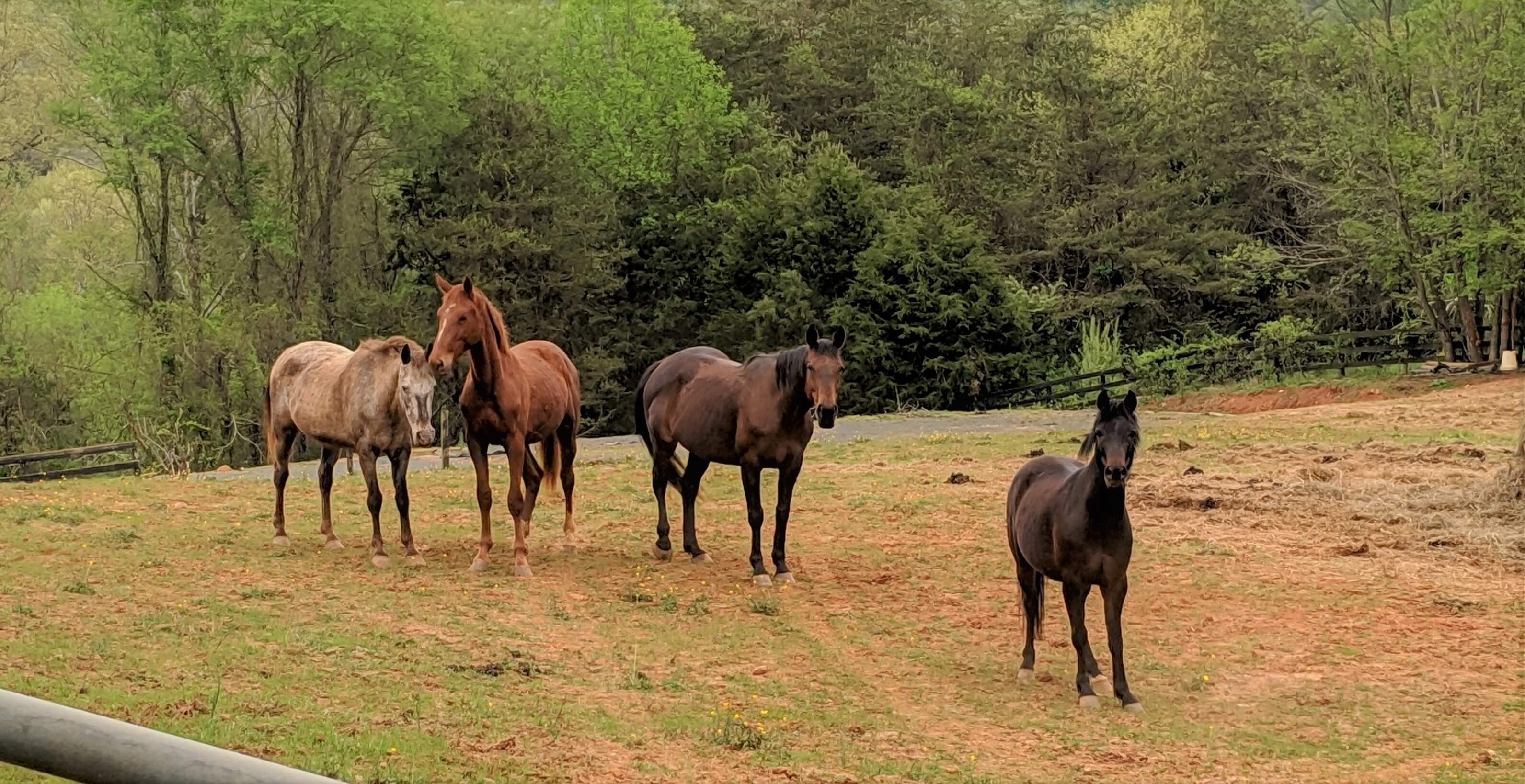 Now that little Bridgette is 5 weeks old, I figured it was time for her to meet the horses. After all, she’s going to be spending her WHOLE LIFE with them, so the sooner she gets along with them the better. (We’re agreed the whole point of having kids is to force your hobbies on them, right? Ok, good.) 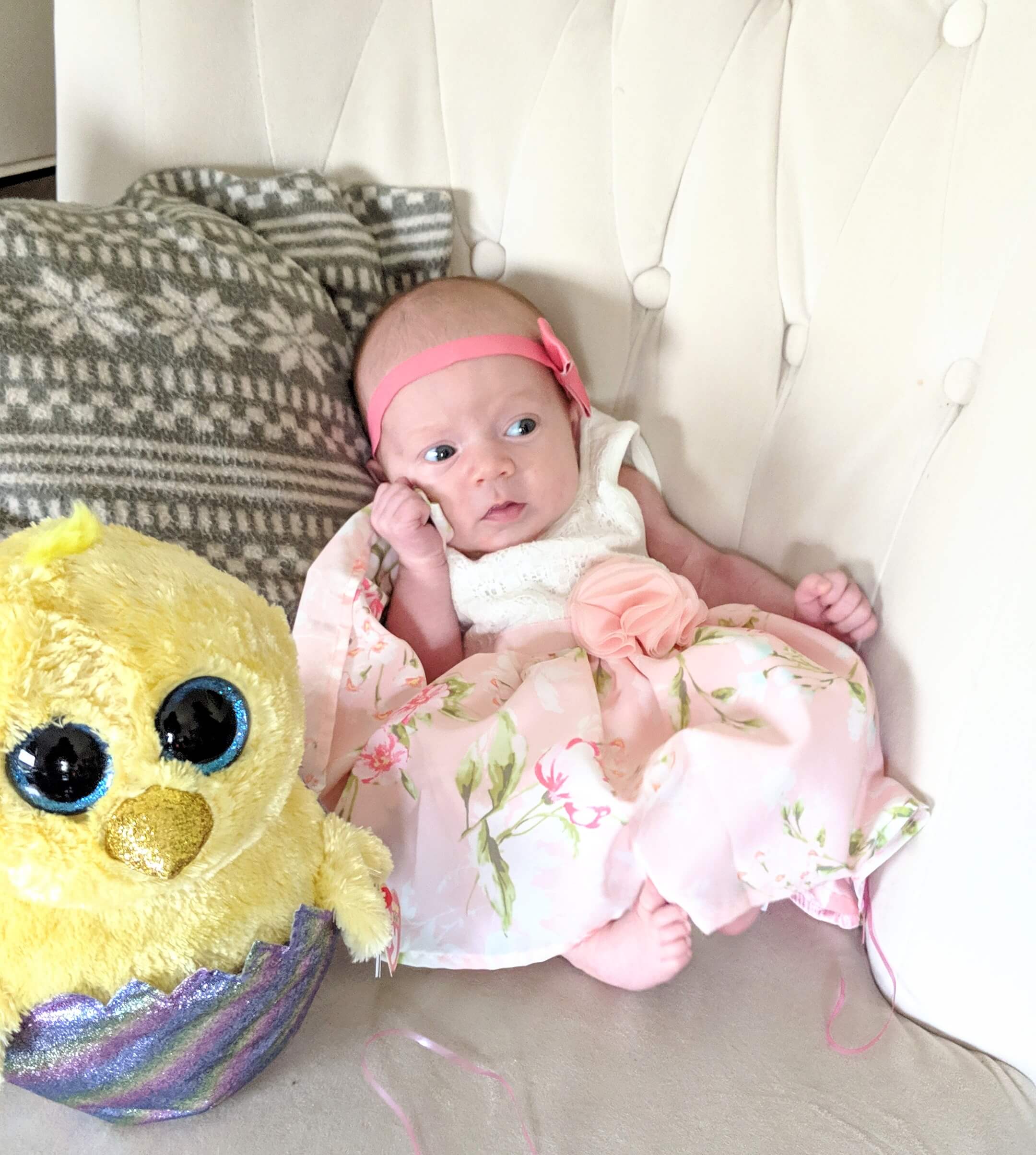 Before we get to the meat of the post (or meet, cause of introductions, har har), here’s baby at Easter, doing her thinking man pose. Just try and tell me that’s not the cutest little funny baby EVER. She can’t sit up on her own so I had to awkwardly prop her up on a pillow. I feel like the awkward really shows through in this picture.

I started out with putting Bridgette in the baby stroller (which I am henceforth going to call the “Pram” like the British, because it’s only four letters vs two words for the American version. Bridgette likes being taken for walks in the pram, at least she stops being Sad Baby while she’s out, so I figured it was a good way to show her the horses. Although really the introduction is more for the horses (who have never seen a baby or a pram that I’m aware of) than the baby, as I’m pretty sure Bridgette has no strong feelings on anything currently. 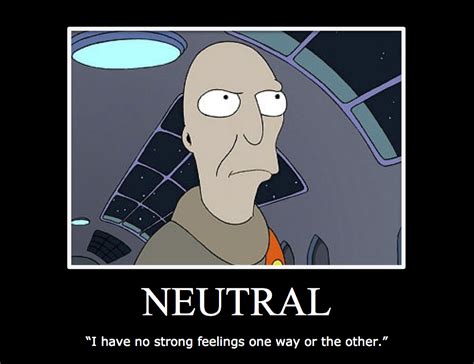 Bridgette, most of the time.

I walked the pram over to the field, and you’d think I set off a bomb for the way they reacted. Actually, I think they would have reacted less to a bomb than the pram.

Although really, it was Pony leading the upset, with Stu looking for him for guidance (German bros sticking together), Berry looks mildly concerned, and Vintage being the stoic boss mare, showing leadership in this difficult time. 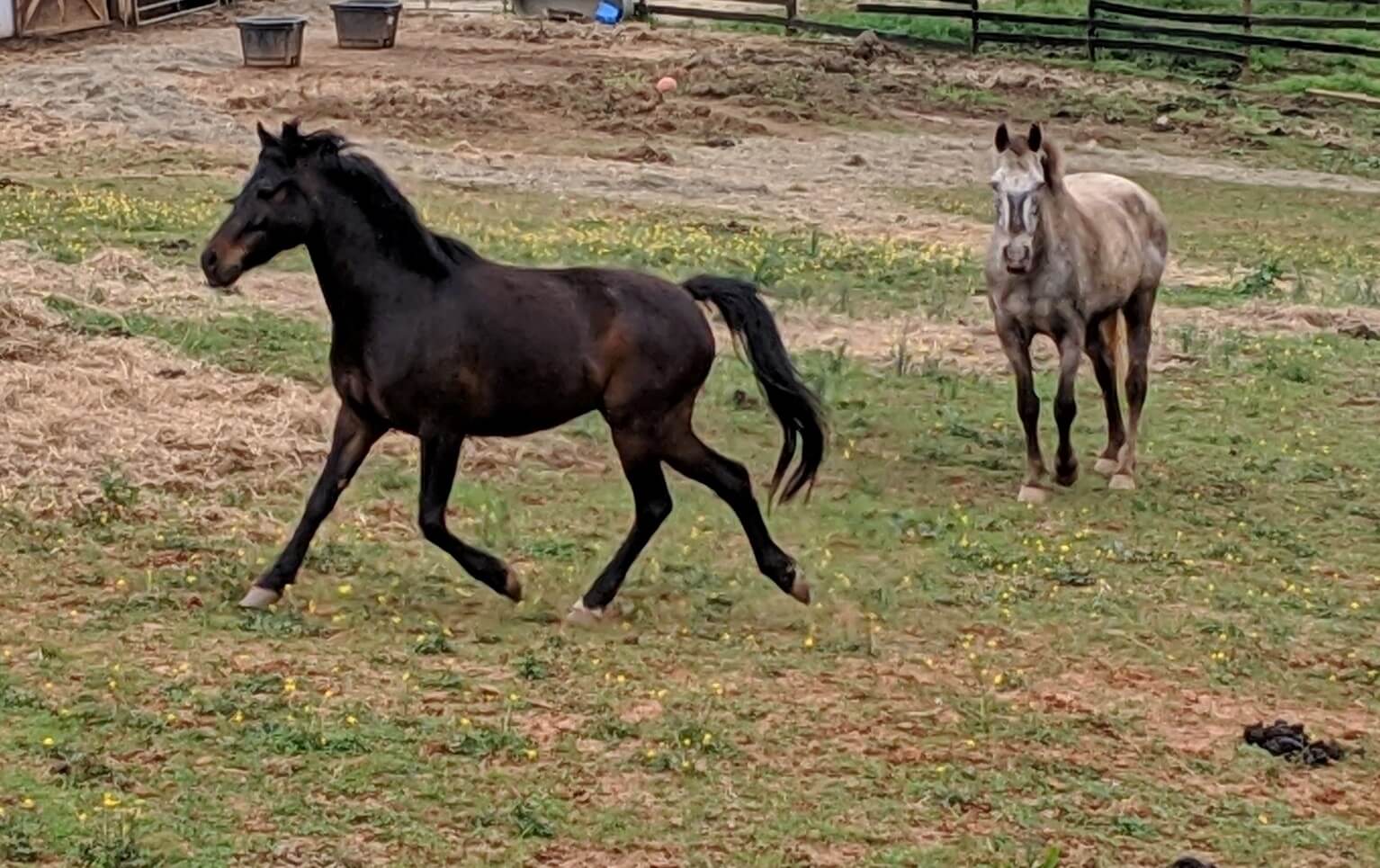 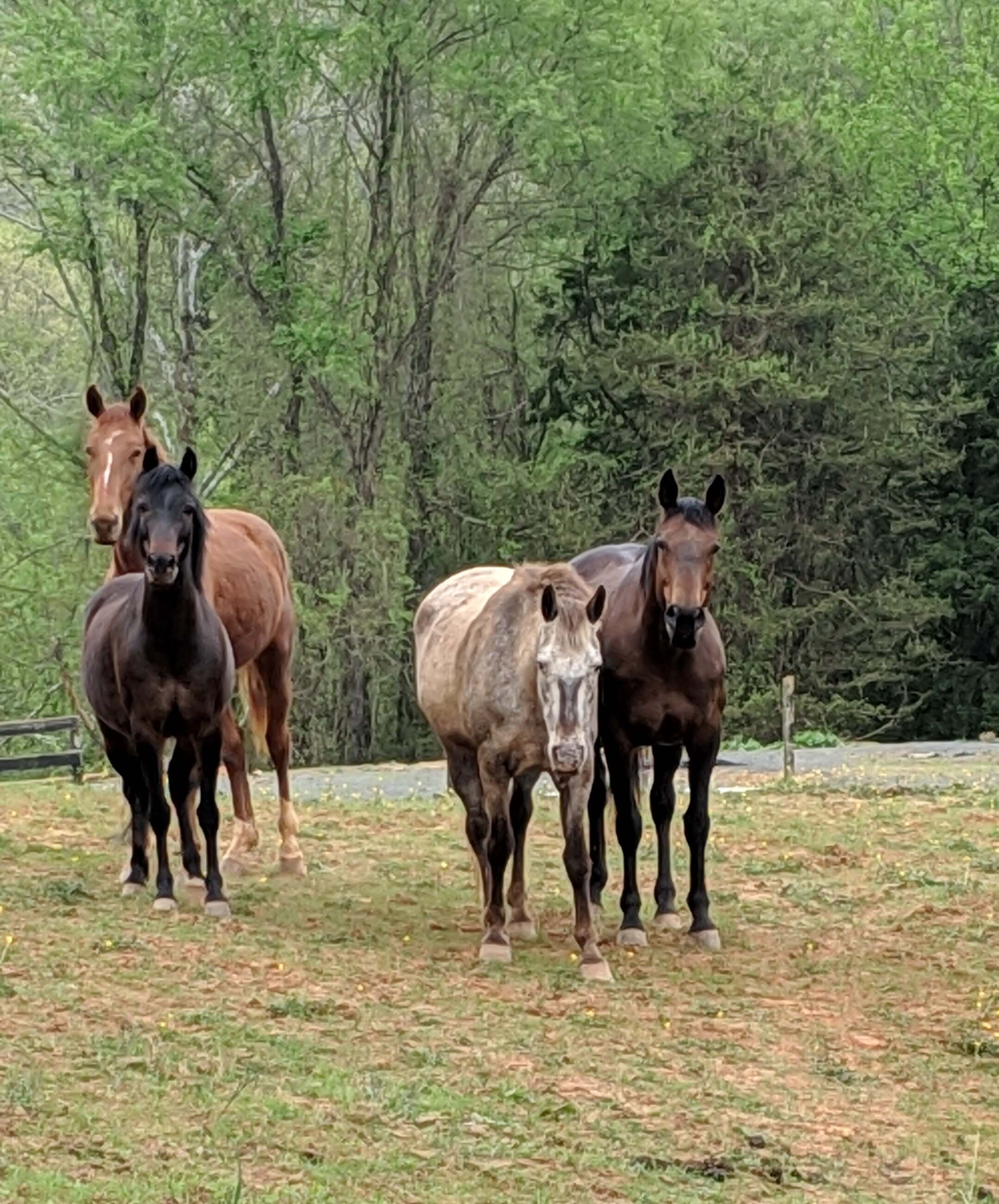 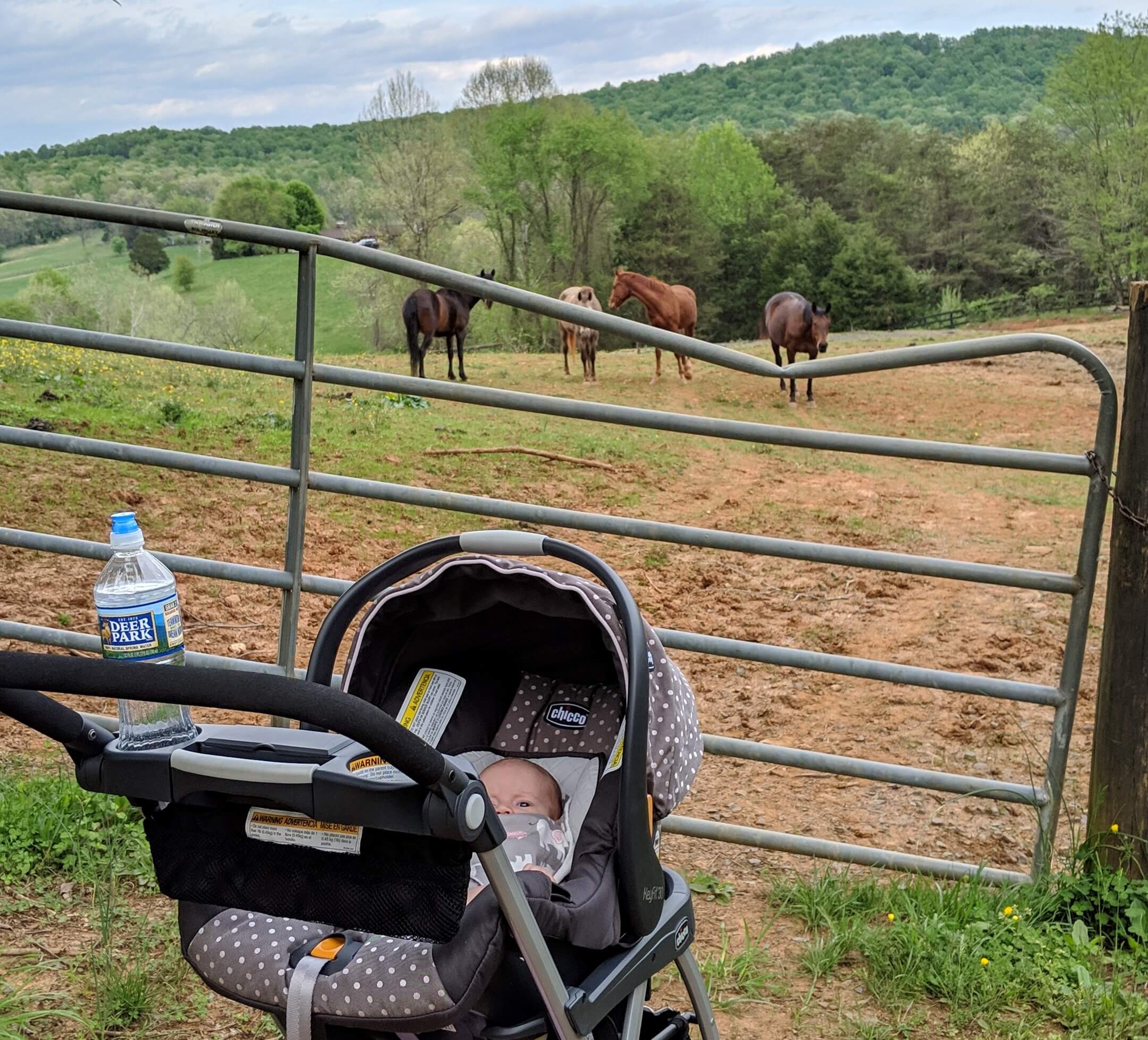 They would not come any closer and held rank until I left.

I left them at that, traumatized and sticking together in their group. I’m sure they won’t resent me forever for bringing such trauma to them.

The next day, I brought her outside again. This time the main goal was actually to do yard work, which had been seriously neglected since pregnancy and getting Bridgette cut out of me. I meant just for Bridgette to enjoy the fresh air, but Sad Baby hates fresh air and was crying when the pram was stationary. So I took her on a walk around the backyard, and that’s when I was spotted by the herd. This time though, they surprised me by coming closer, instead of fleeing in terror. 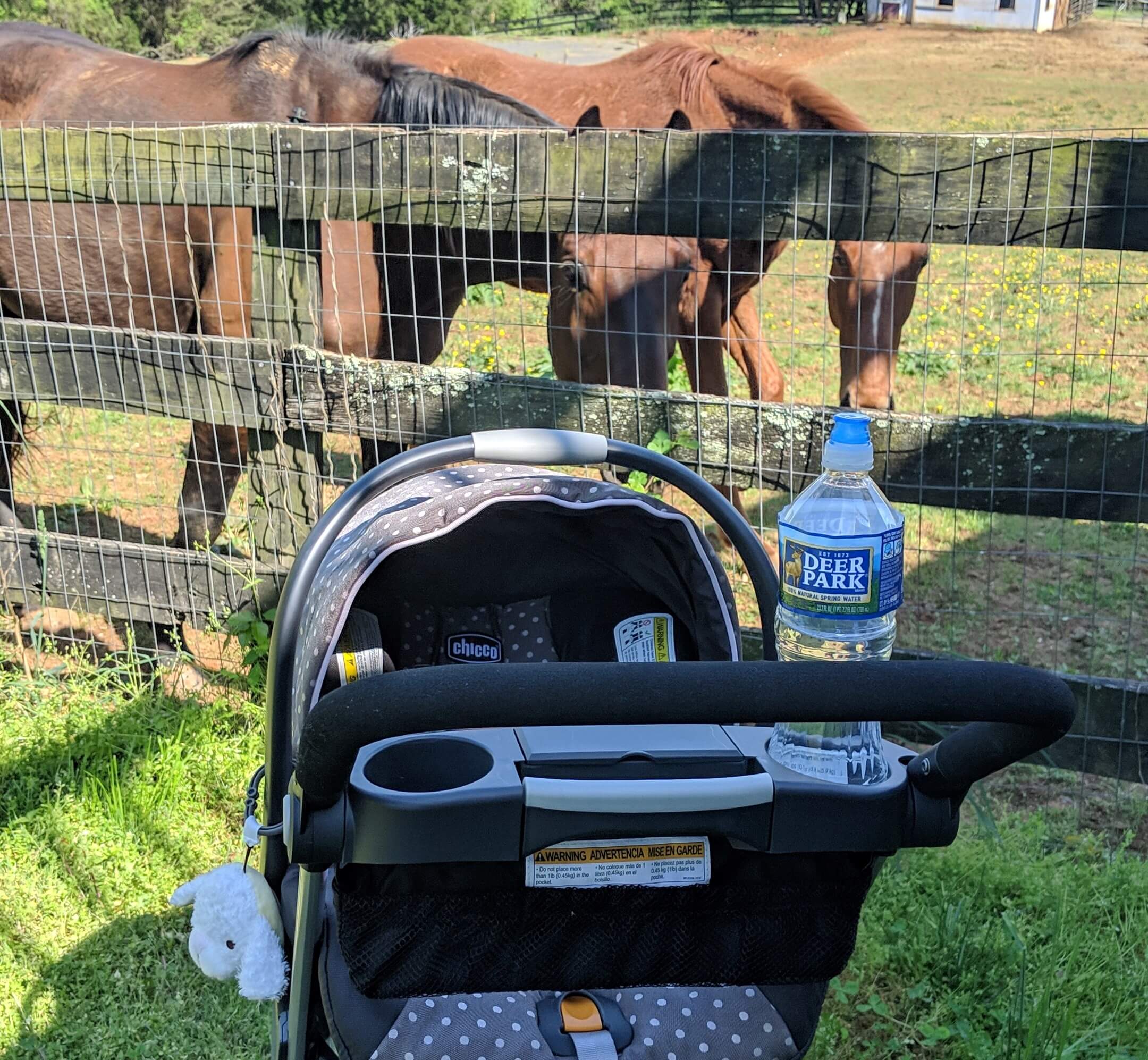 Berry, who I suppose also didn’t care much before, was the bravest. 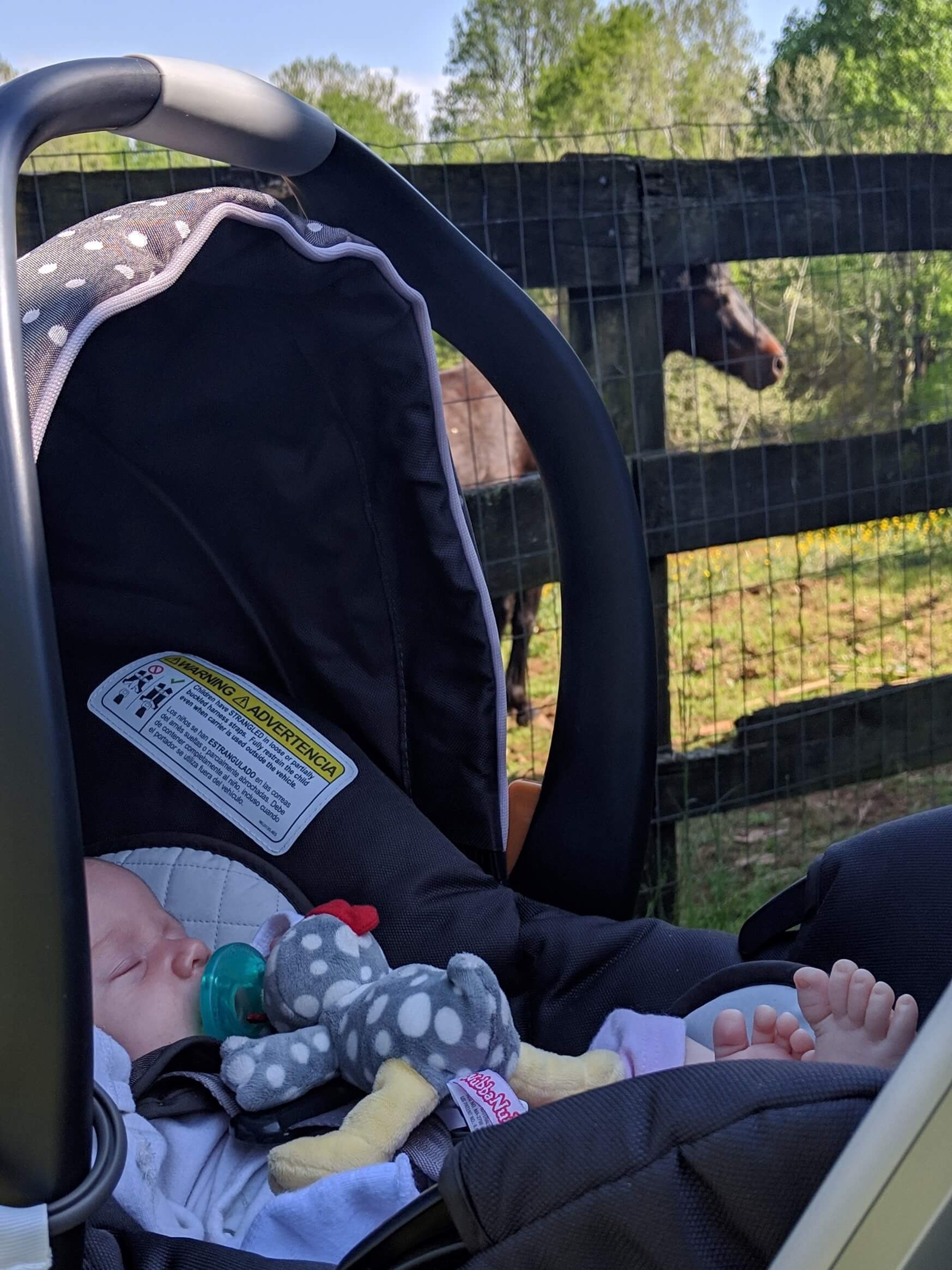 Pony wanted to check it out so badly but just couldn’t work up the courage. 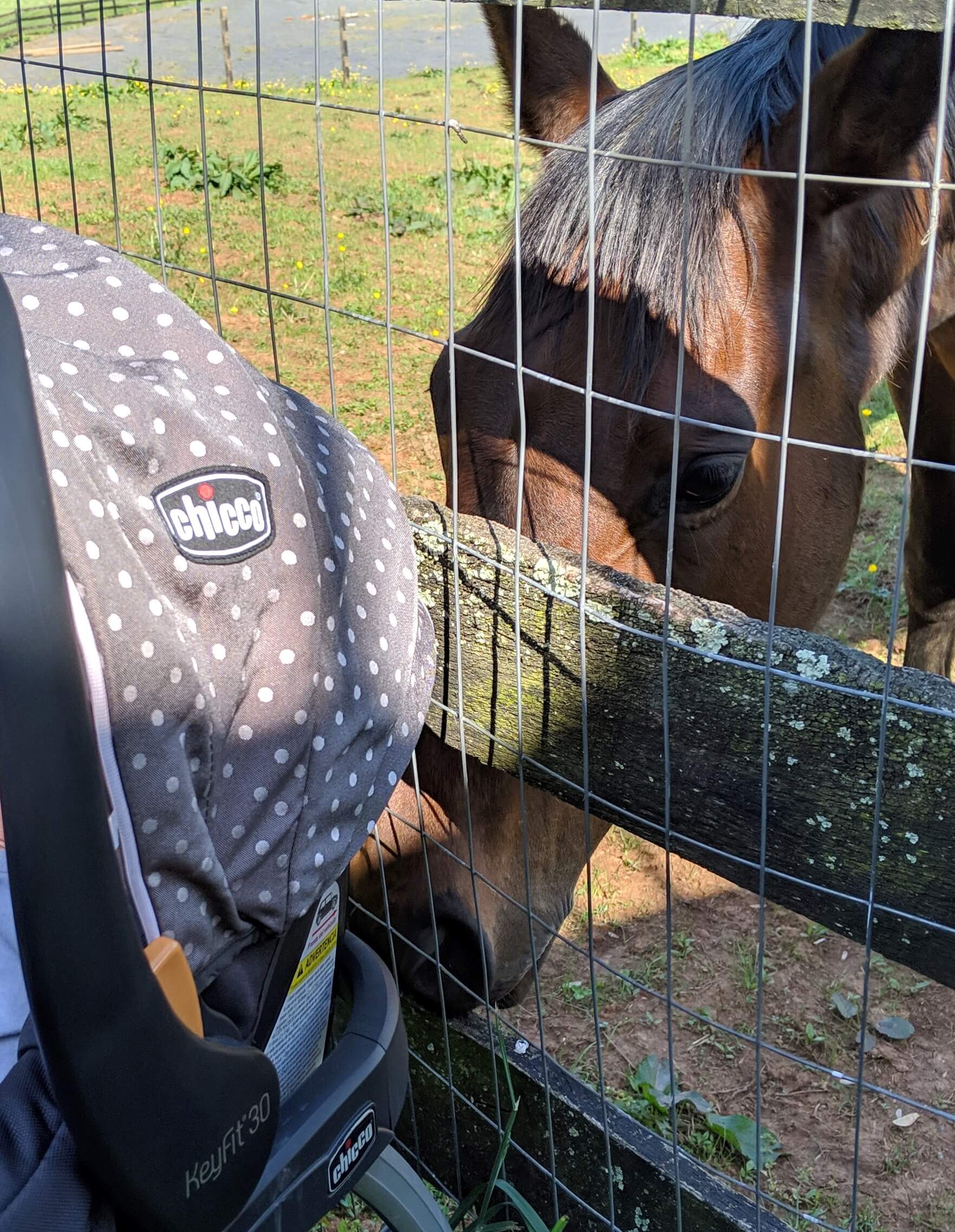 Berry has no fear. 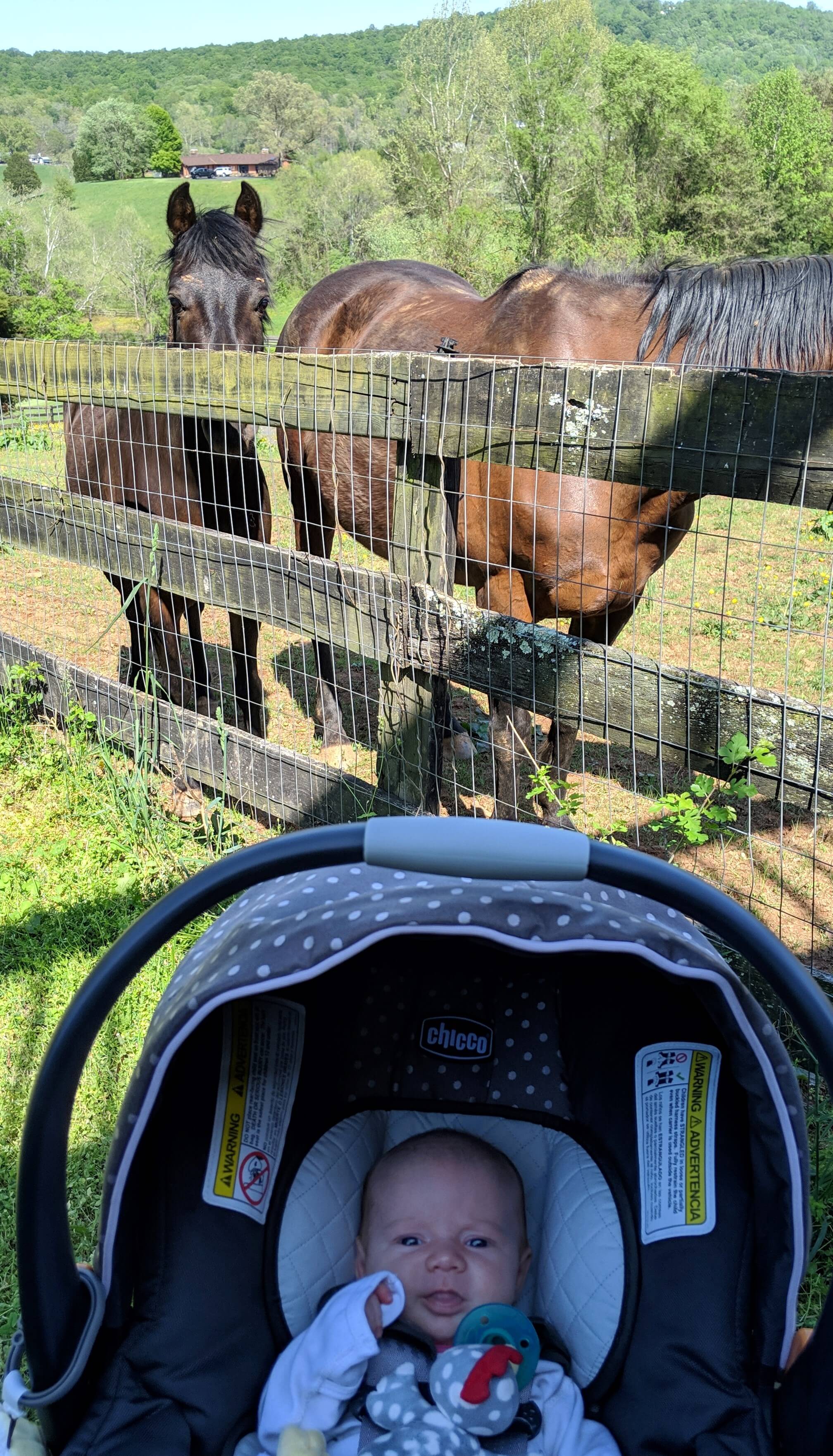 Pony uses Berry as a horse shield while investigating.

So introductions went well! I think Berry and Vintage are okay with the pram, Pony and Stu will still need some desensitizing. Pony is definitely a bad influence on Stu though. He would be a lot braver without that pony. I think they’ll get it though. I do have like two years before she’s able to move around and maybe touch the horses, so I’m feeling pretty confident we will get it before then. Plus it’s just good for horses to not be afraid of a pram, who knows when they’ll see one out in the wilds of horse shows.

Next step is to get them used to her screeching. That should be fun, especially since when it comes up so randomly and at varying tones!