I had another riding lesson last night, except… it was not on my horse. I have managed to not say anything in front of my horses, but I think they’ll figure it out next time I ride them, because I had an awesome lesson, and I feel like a better rider. 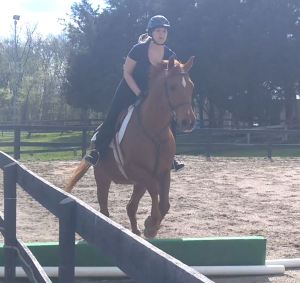 My look of intense concentration.

Because I have become a defensive rider due to my high energy mare, it was nice to be on a horse that knows his job, and just does it. If I make a mistake on Vintage, she practically screams it to the world. This horse, Simba, didn’t seem to care much about anything at all.

This was hugely different, and made for a slight bit of annoyance at the start of the ride, because damn, is there any kind of acceleration on this animal!? I was huffing and puffing just getting him to trot. My request for a crop was denied. So in that sense, I can appreciate my sensitive mare who moves at the slightest touch.

BUT, because Simba didn’t care about much at all, I managed to actually sit up, jump appropriately. Apparently I tipped forward too much before, to the point of knocking the poor creature under me off balance. This explains a lot.

There was an emphasis on staying back, and making my leg solid. Hunters seem to have a lot more contact with their leg than I’m used to. Hopefully with practice I’ll get that beautiful, elegant leg they have. So jealous of that.

I started out jumping a crossrail, then that green box in the first picture, and then, to actual jumps. Which was terrifying. The jumps weren’t huge, but they were the biggest thing I’ve jumped in a very long time. My instructors confidence in me gave me confidence though. She seemed to think it was no big deal. 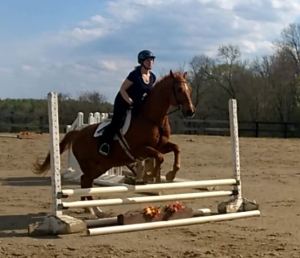 The most terrifying vertical ever!

But after I made the plunge, suddenly, it was so easy. Simba was a very good boy, bordering on apathetic, and he wasn’t going to do anything. I just needed to stay back, and let him do his work. Then it went from terrifying, to best ride ever! (just don’t let my horses hear that).

After jumping a few singles, my instructor listed off a course to do. I was like “wut? I don’t follow.” She replied, “Just jump every jump in here, and keep going.”

And I wasn’t scared – I was thrilled and excited. I knew I could do it – and it was the best feeling ever!

Dave wasn’t in a good angle to get pictures of every jump, but I’m not complaining. I’m just so glad I was able to get a bunch of pictures of one of the happiest rides I’ve had.

Side note: I wore another 5k shirt. I thought I’d keep up the trend from last week. I don’t actually have that many left, but I think I can keep this going for a while. This shirt was from last years Lozilu Mud Run, up in Frederick Maryland. It was awesome and I’m doing the one this July too.

Now I just need to a.) Feel this confident riding Vintage and b.) get Berry sound, because she has a case of the abscess. So it’s just Vintage until Berry gets sound. Well, and the Pony too, I guess, but I’d have to weight 90lbs to ride him. So if I lose 50+lbs in the next few weeks, I’ll be able to get plenty of practice!

I’m really thrilled with how these lessons are going. I’ve gone to so many instructors that seem to progress me really slowly, and now I feel challenged, and like I’m learning things. Basically, her challenging me, is making me learn quickly. I think this is the start of a good relationship!