We took a day trip to Busch Gardens. I had always thought previously that this would be impossible, we lived too far away and the drive would be too long. As an owner of very needy pets, staying anywhere but my own house is a huge inconvenience and requires extreme coordination. But it was only about two hours, so now the probability of visiting historic Williamsburg is now available. Hurrah! I love Williamsburg!

We got there right about 10:05, minutes after it opened. This caused a minor annoyance of having to wait to get into the parking lot. Also, parking costs $15, unless you want to be a VIP and pay $25 for a closer parking lot. We are not that important, so we paid the $15 and went with the other plebs to the Germany lot. The VIP was the France lot, and boy, was it ritzy! They even had a few trees at the end of select rows to shade your car.

We were supposed to be meeting up with a group, but they were moving slower than we were, and one of them got rear ended on the drive there. Because we are impatient, we moved right along into the park.

One of the best parts about Busch Gardens is that they spent a lot of effort into landscaping and decorating. It was 90 degrees there, but because there were so many trees shading the paths, it wasn’t very noticeable. They are right in calling themselves the most beautiful theme park.

If you’ve never been, the park is divided into different countries in Europe. Although really, it’s a pretty small grouping of countries, but there’s England, France, Germany, Ireland, Scotland, Italy, and then a broad “Oktoberfest” section, where I ended up buying Miami Vices. Not that they specifically sell these, but they made it for me on special request. It’s half strawberry daiquiri, half pina colada and it’s the most delicious frozen drink ever.

We went to Germany section first, and rode Alpengeist, which was the new coaster the last time I went, which was a long time ago. That was my favorite coaster of the day.

After that, I convinced Dave to ride the log flume with me because I love water rides. It’s there we learned about a neat perk of Busch Gardens.

We are big picture people. I love pictures in general, and Dave loves pictures of him doing stupid things on rides. We usually get suckered into buying the keychains, or whatever oddball item with our picture in it. Digitals really are the best though, and while Dave was explaining this to the friendly photo attendant, she told us they do sell the digitals, but they will sell them as an entire package. As in, you pay $50, and you can have every single photo Busch Gardens takes of you, including all rides, and all of the random ones around the park.  If you like photos, this is a deal because buying a single print out from the booths costs $15 at the least, and likely $25 to get it printed on something you would actually want.

We bought the package, and then it became a minor mission to get every possible photo taken of us at every location in the park. Although when we looked at the photos later, some of them were a bit… questionable.

The rest of the group showed up, and we went onward to more rides. Next up, was the Griffin.

I’m not afraid of roller coasters, I think they are a lot of fun. But I am afraid of heights. This may seem in contradiction, but when I’m on a roller coaster, I do not notice the height because I’m moving. So basically the only times I’m scared is when the cars are being pulled up to the top of the coaster, and then when we’re just kind of sitting for a moment before the release down the hill.

On the griffin, they designed this unique feature I hadn’t experienced before, and my friend explained to me right as we got to the top.

“They pause at the top and hang you over the drop.”

I’m so glad I wasn’t in the front row. It was bad enough looking over their heads down the drop. 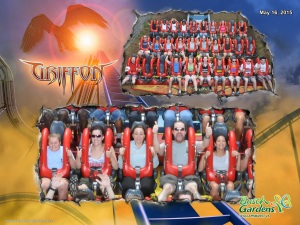 Then back to the log flume, where Dave told me to try to pose for the camera. I didn’t know what to do, so I just kind of flailed my arms in the air. 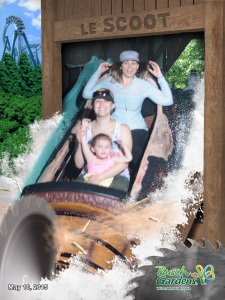 We were intrigued by a ride called Curse of Darkcastle, because we couldn’t figure out what it was and it was all inside and hidden, but apparently so was the rest of the population and the wait was 40 minutes. The park was started to get crowded. We decided to get a Quick Queue, which allows you to jump to the front of the line. We should have gotten it to begin with. The one we bought allowed one entry to each of the major rides, but they also offered one that allows unlimited rides. If we had bought them at the start of the day, we probably would have gone with that, but it was already getting late. Quick Queue isn’t a perfect solution though, as we still had to wait in lines, but for Darkcastle it let us skip about 3/4’s of the line. Other rides ended up having a line just for Quick Queue.

But back to Darkcastle – it was an interesting concept, and I think it had potential, but if I had actually waited in the hour long line (it got longer in the time we took to walk to the front of the park to buy Quick Queue. Silly us, they sell it at most shops) I would have been disappointed. It’s called a 4-D experience, and basically you sit in a little car wearing 3-D glasses and it takes you through several rooms where a ghost talks about you being trapped in his castle, and his overbearing mother tries to help you to escape. It was less of a ride and more of 3-D projections of things getting thrown at you. There were some times were the cart shook to make you feel like you were falling, or twisting around, but it just seemed so lacking. It didn’t really immerse me in the experience.

We continued on, and I experimented with not gripping to the hand bars on roller coasters.

I tried on masks in Italy:

The mask shop is my favorite store. I bought a mask many years ago when I was here, but I don’t know where it is now. Dave told me to get one, but it was one of those times where there were so many choices, I was too overwhelmed to pick, and left empty handed.

We bought passes that allow a second entry, and we fully intend to use them. The Wine and Food Festival is starting next week and that’s running until the end of June. Alternatively, I could use it during Halloween, but then the water rides won’t be open. I just can’t decide!

I definitely want to go to Colonial Williamsburg though. Perhaps a trip combining the two would be best, but that would require an overnight, and I hate having to coordinate that!

Conclusion: Busch Gardens is fun, and if you like theme parks you should go. 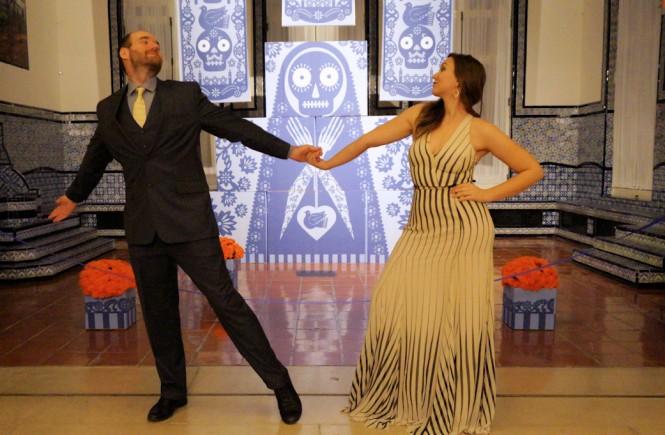 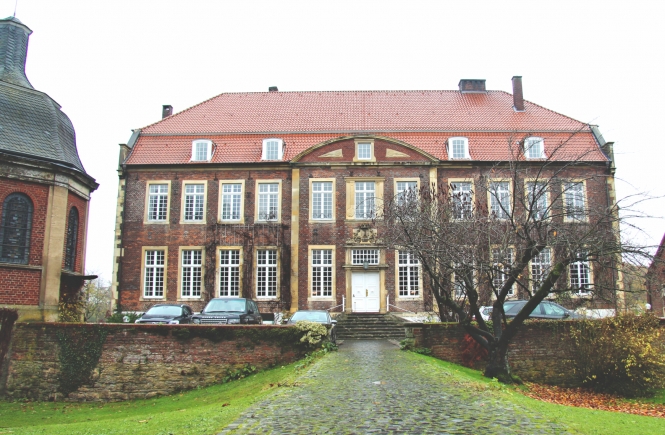