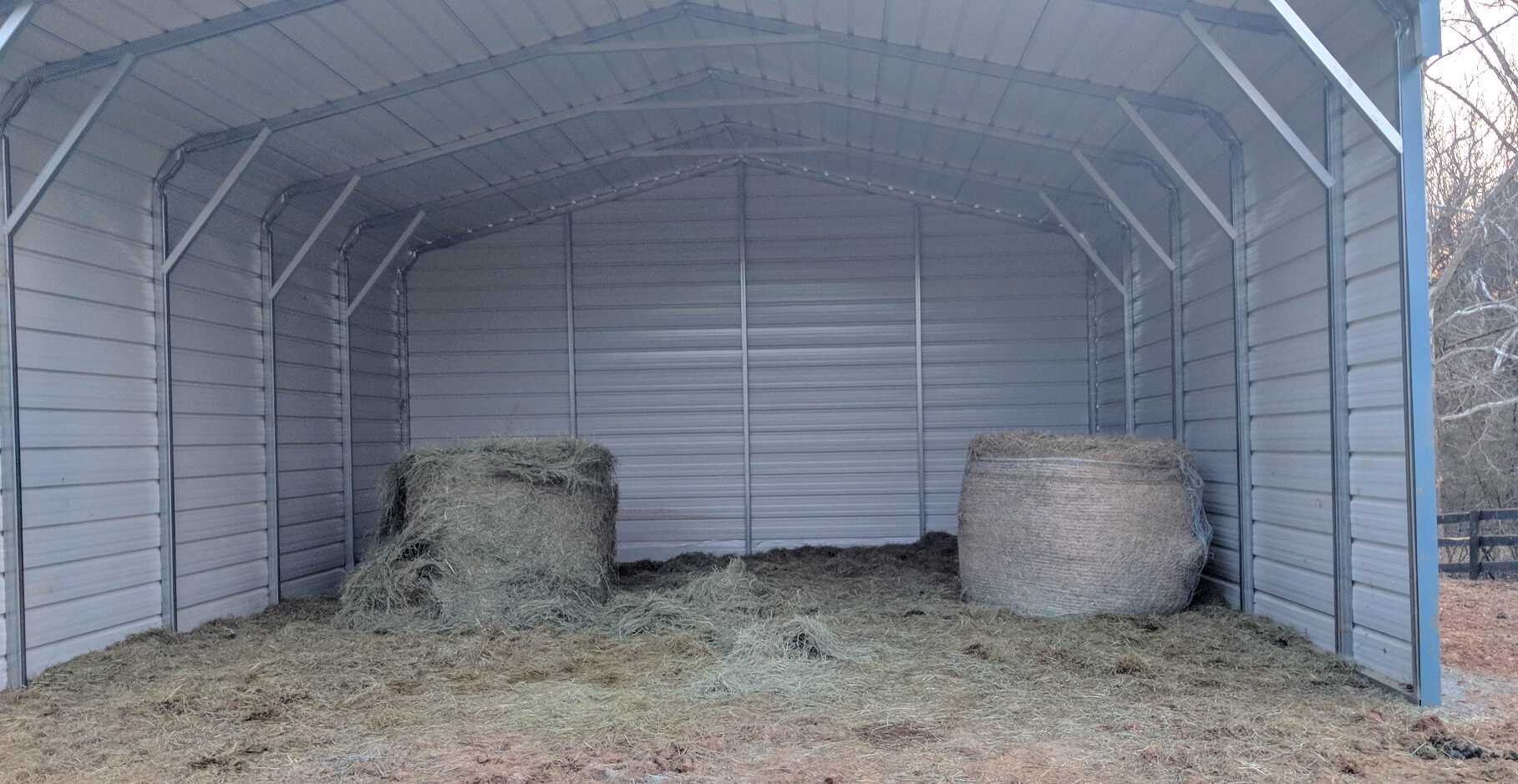 Yesterday, I watched with satisfaction as my hay guy dropped two fresh round bales in with the babies. Then, he dropped a third to be put in storage. We pushed it in next to the remains of a fourth round bale. I don’t have to worry about hay for at least a month.

Hay has always been a source of worry. It’s the primary food for horses, obviously, and I never feel like I have enough of it. They always eat it faster than I expect them to.

I was 17 the first time I ever bought hay. I had owned Vintage for over half a year, but it had all been warm months, with her in a huge field with so much grass. It was getting cold, the grass was finally dying, and I needed to get hay.

We didn’t have the internet back in those days – not like we have it today, anyway. I searched a local newspaper for hay advertisements, and found a place 30 miles away. Local seemed to be a misnomer, but I didn’t see any other options. I figured that if it wasn’t advertised, there must not be any hay closer, and this was backed up by me never seeing or recognizing hay fields in my travels from home to school.

My dad drove me out to pick up the hay. It was the first time I’d been on an actual working farm, not meant to look pretty, but built for utility, with huge machines and buildings that would not have looked out of place scaled down for a hamster cage. The bale was pulled out of a huge pyramid of other bales, and shoved right on the back of the truck. It didn’t look like any hay I’d seen before, it was darker, browner, but I figured I didn’t know enough to critique it. I gave the man $30, half of my week’s earnings at my part time Domino’s job, and we drove away.

We put it in Vintage’s area of our newly constructed barn, the wood still gleaming bright with newness, and unwrapped the bale. Chucks of it fell away, exposing the white and black mold underneath. I knew hay wasn’t supposed to look like that, but I didn’t know what else to do. I paid for my horse’s expenses, and I didn’t have money for another bale. Poor Vintage ate it. Not all of it, but a lot of it. I look back and cringe.

Through word of mouth, my parents found a closer source of round bales, so the next hay bale Vintage got was much higher quality. Hopefully that, and the lifetime of mostly luxury she’s had since make up for that first terrible bale.

Years later, after I had moved out, all my horses moved back in with my parents. 3 horses, including Vintage and Berry, appeared in their fields. It was up to me to find hay again, and having a full time job this time, I went with convenience. Our neighbor across the street had decided to play the hay market, and was in the business of buying and selling hay. She sold us all my bales that winter. It was high quality, it was expensive, and one time she took out my parent’s three board fence by thinking she could just drop the whole round bale over the fence instead of going into the field. Maybe some people could have been capable, but she was not.

We moved all the horses to our own farm the following spring, and I was determined that I was going to be one of those people that had regular shipments of hay delivered and carefully stacked, just like at my lesson barns. My first delivery was 400 square bales, stacked gloriously to the ceiling of my barn. I thought it would last me all winter, but it lasted about 2 months. As I was breaking open the last one, wondering if my horses were throwing parties and invited their horse friends over for dinner, I decided I was not going to buy square bales again.

I did have another encounter with square bales though. My parents, lacking a herd of horses to eat down the grass, decided to start haying their fields. At first, this seemed like a great idea. Very cheap, unlimited hay. I was out there in the humid Virginia weather collecting the bales right off the field. Then, stacking them in my parent’s shed. Then, transferring them to my truck and trailer. Then, driving the 50 miles down to my house. Unloading them into my barn. Rinse and repeat. It was literal hard work, and it was not fun. I might have been able to put up with it, but for the final blow – I ended up with poison ivy all over my arms from handling the hay. My parent’s farm has always had a poison ivy problem. It brought back memories of being a teenager and getting poison ivy from my horse’s mouths, but in the end, I decided I could do without that memory.

Despite the internet, it was hard to find a new hay dealer. They are very loyal to their customers, and often times I would call only to be told it’s all spoken for. Even harder was finding someone who would deliver the hay. Even though my horses seem to be multiplying, I am not a large farm, and most dealers only want to deliver a large amount, or just wanted a lot of money to deliver. (I don’t blame them for this!)

We went through a few hay dealers, always with the same procedure each time – the dealer would stick the bale in the bed of the truck, we would drive it home, down through the pasture, roll it off the truck, and into the barn. Complicating matters was that any amount of rain would turn my hilly pasture into a slip and slide, so we could only get hay on days when it hadn’t rained recently, or the ground was frozen, but not wet frozen, because then it would just be the ultimate sledding hill. I already monitored the weather for the horse’s sake, but now I monitored it for the hay, too. I had to plan out exactly when I could get hay, and how much hay I should get to last until the next time it was dry. It could be frustrating, as I sat at work, thinking about how low my hay is getting, while staring out the window at a perfect, clear sky. Rushing to get home to get hay before the weather changed was common. Saturday pick ups, where it was clear I was the only customer there, were appreciated. It was still a 30 mile drive each way, meaning my whole day could be taken up by driving back and forth to load up on hay.

I could get a big delivery of hay and stock up? I tried that once – I ordered from a large supplier and got 6 bales at once, the maximum my barn could store at the time. The truck was so big, it couldn’t make it to my barn, so the bales were dumped in my front lawn. I don’t have a hay spike to move hay, so the fun really began when we all pushed the bales down the hill to the barn. It’s not as fun or easy as it sounds. I got out my tractor and tried pushing the bales down. One exploded and left a feast for the horses. Eventually, hours later, we had pushed them all down, and we rejoiced at our full barn of hay. Then, I found mold in them. Lots of mold. Two of the bales were completely unusable, although I unrolled them out in the field just in case Vintage wanted to bring back memories of her youth.

This year, I was facing yet another winter of hay agony, when I finally posted on my neighborhood FaceBook group, begging for a recommendation. One name was repeated more than the others. I started calling him nonstop, only to get no answer. After venting my frustrations in the FaceBook group, I was given a second number, where he got back to me immediately. Turns out I’d been blowing up his mother’s phone. Whoopsie. Despite this, he still agreed to sell me hay.

He’s only 10 miles away. He will load my truck with a bale, or he will deliver to me. We’ve gone to him many times now to pick up hay, and each time, he opens up a little more. One of the early times, he stopped me as I was leaving, and pointed into his field. “Bald Eagles,” he said. I paused to take in the Americana experience of it before he continued. “They are just prettier buzzards.” Right around Christmas, he handed me a little cow sticker with a tiny calendar attached. “Merry Christmas,” he said. “Normally the guys put it on their windshield, but a lady might think of some other use.”

Yesterday, he delivered three bales to me. As he parted, he asked, “How many more bales do you need this winter? I’m saving them for you.”

I think I swooned. It’s been a long time in the making, but I finally found my hay guy.