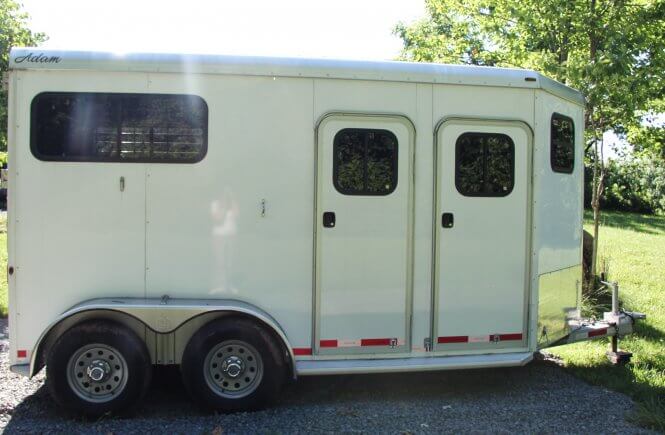 I always find it interesting to learn why people buy the things they do. “Such and such is soooo perfect!” they will say. But why? What unique needs did the person have to make that choice? What experiences made them decided they had to have that feature? Why is what they wanted so different from what I wanted?

Because of these thoughts, I decided I would share why I picked my horse trailer, and what experiences I had that made me really want the things I wanted.

Brief background –  I’ve been driving a horse trailer since I was 17 and usually used a trailer several times a week. I’ve pulled a few different ones, both ones I’ve owned and ones I’ve borrowed from other people. I’ve only driven bumper pulls, never gooseneck. If my truck had a higher towing capacity, or I regularly trailered multiple horses, I would have looked into a gooseneck.

My absolute must-have was rumber floors. I refused any trailer that didn’t have them. I was obsessed with these floors for so many reasons. They are more comfortable for the horse to ride on, they block out more road noise and heat, and they are easier to maintain. I wanted these floors way before my last trailer’s life ended, but one of the main reasons the trailer’s life was over was the wooden floors were rotting. I have no idea how long they were like that before our maintenance guy noticed, and I’m so thankful Berry didn’t end up with her foot going through the floor. Never again will I take that chance. 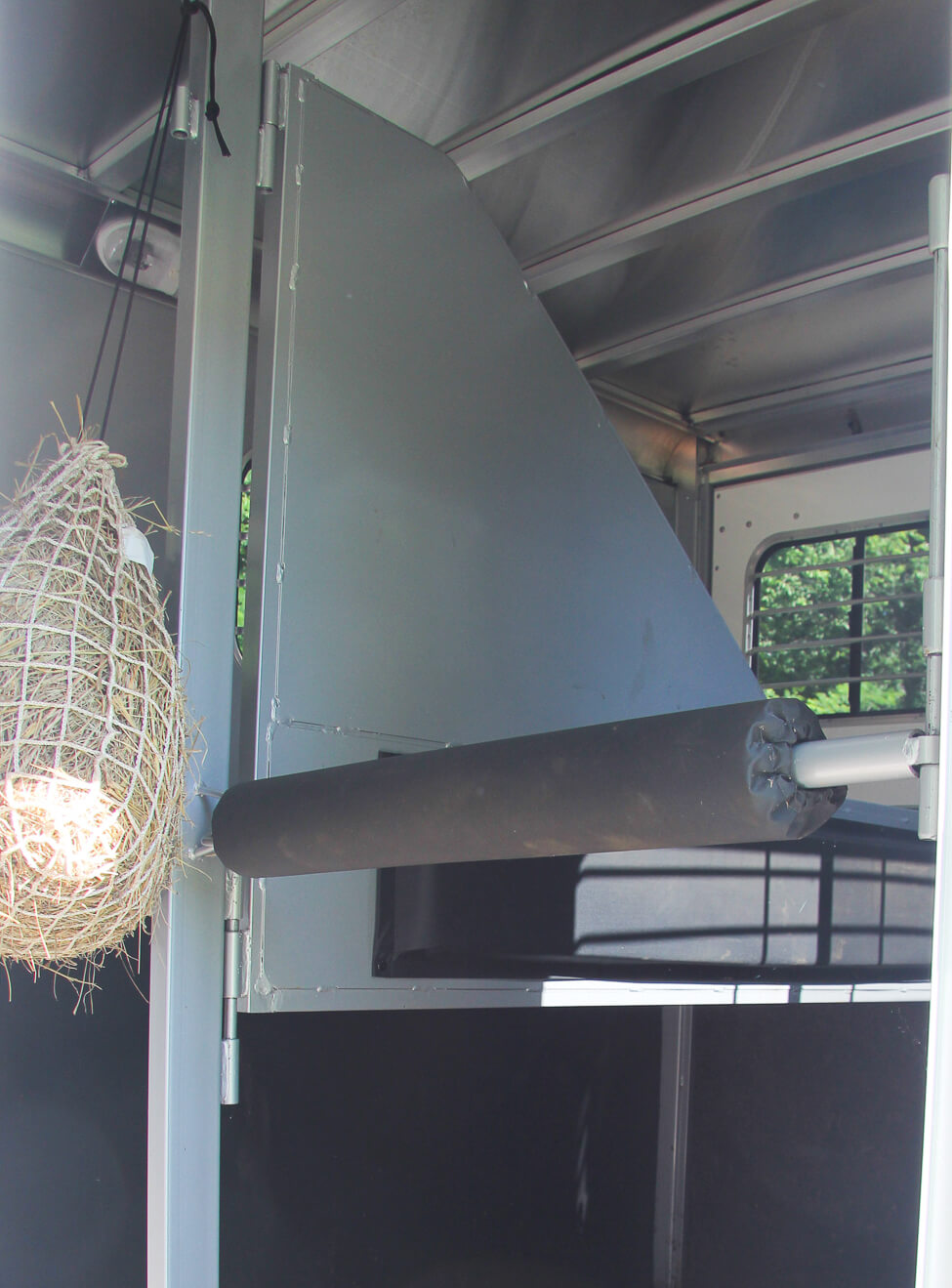 When I was a kid I used my parent’s stock trailer to haul Vintage around. It was about as basic a trailer as you could get, although the price was certainly right (free for me obviously, but I think my parents paid about $4k). There was nothing on the inside. Even when I got it, the floors were bare wood. I put mats in there, but that was the only grip the horses had. It made me nervous to think of them back there, unable to brace on anything for both stopping and starting. I mean, imagine standing up on a bus and not being able to hold onto anything. It’s pretty similar.

I was determined I’d never own a stock trailer again because I wanted the horses to be able to lean against something. But why a straight load in particular? Two main reasons – The stalls are bigger than in a slant load, and I had a desire to own a big horse (I can’t remember if I owned Stu at the time, but he definitely falls in the category of big horse). Slant loads can end up making the horse’s muscles develop unevenly. Think about the way the horse is positioned – right shoulder always forward, left hip always back. They use these two points to brace accelerating and breaking. Over time, those muscles are going to be working way more than the opposite shoulder and hip.

Now, in all likelyhood I’d have to be doing a ton of trailering for the muscles to actually develop unevenly. But, imagine if you’re doing a local show, and you show up there with a horse that’s already sore on those points? That wouldn’t be a very good show.

Is this a lot of speculation? Possibly. But I’m not taking the chance!

I also wanted a straight load in case I’m out someplace, and I want to put the horse “in a stall”. I do take out two horses sometimes, and it’s nice to be able to lock one up, and then deal with the other without having to do a horse trailer load swap.

For more about straight vs. slant loads, check this out. 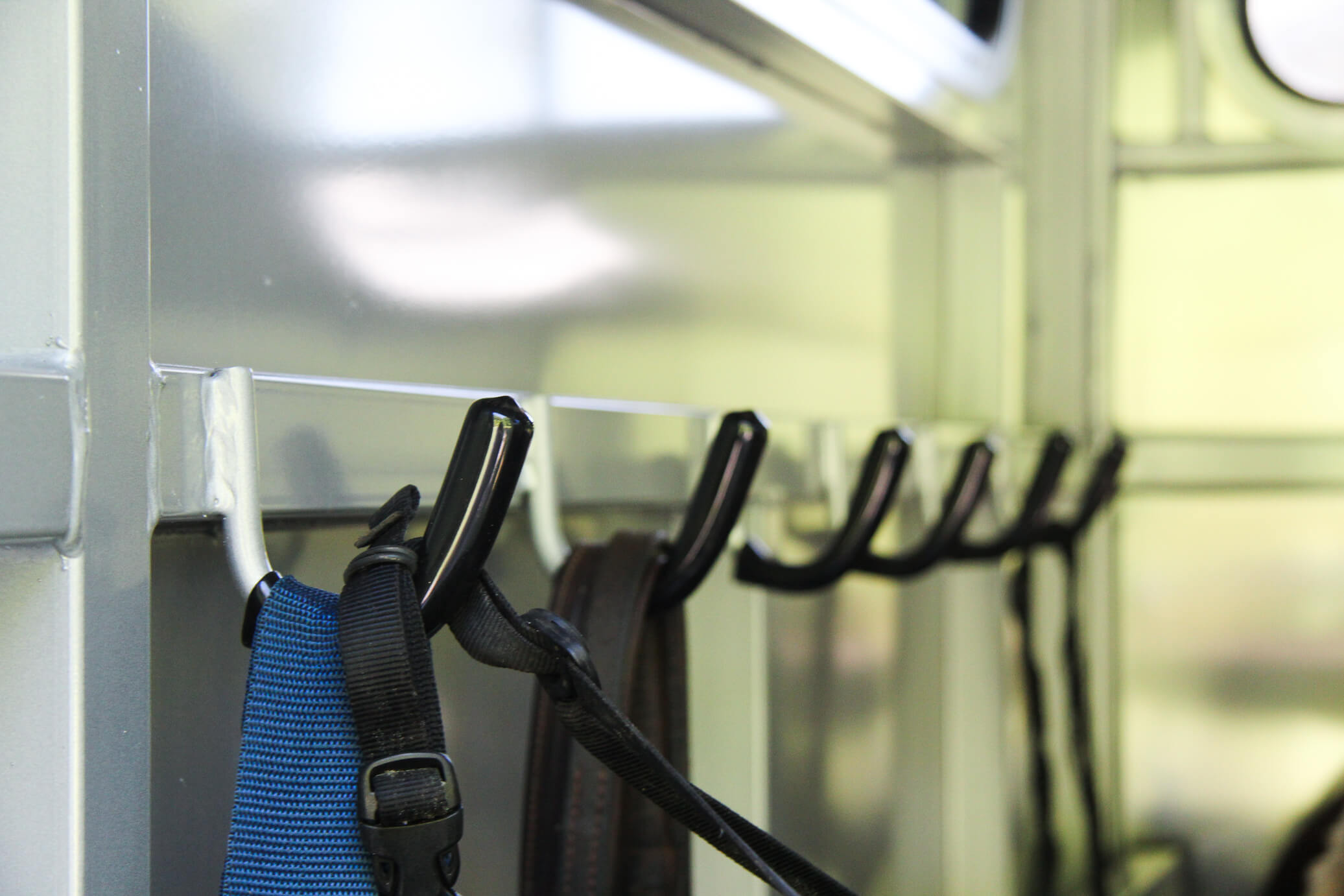 I have existed most of my trailering life without any sort of dressing room. The stock trailer had no storage, and then my first trailer was so basic it did not have a dressing room. I would stuff all of my stinky horse gear into the backseat of the trucks, much to my parent’s and Dave’s dismay (depending on who owned the truck in question). The trick is removing the horse gear as soon as possible upon returning home otherwise the smell would stick to the seats for-ev-er. But, as a fully functioning adult, I decided I would really like to not have to remove my gear immediately, and I like being able to just keep buckets and water in the trailer in a designated spot that isn’t “rolling around in the front near their hooves.”

In my old two horse trailer, I would show up places with Berry, and she’d be covered in sweat. At least I thought it was a ventilation issue, as it is a big metal box. But, that trailer was probably one of the most open trailers in existence. Except for the ramp, it was literally completely open in the back. I decided instead that Berry gets stressed out from trailering (which is also why I wanted rumber floors, I thought it would ease her stress). But still, I decided I definitely needed ventilation for those poor animals. It’s rough not being in AC.

Also on my to-do list is to install some fans for them. Seriously anything to make them more comfortable, I will do (But this is an after-market consideration, not a requirement for purchase.) 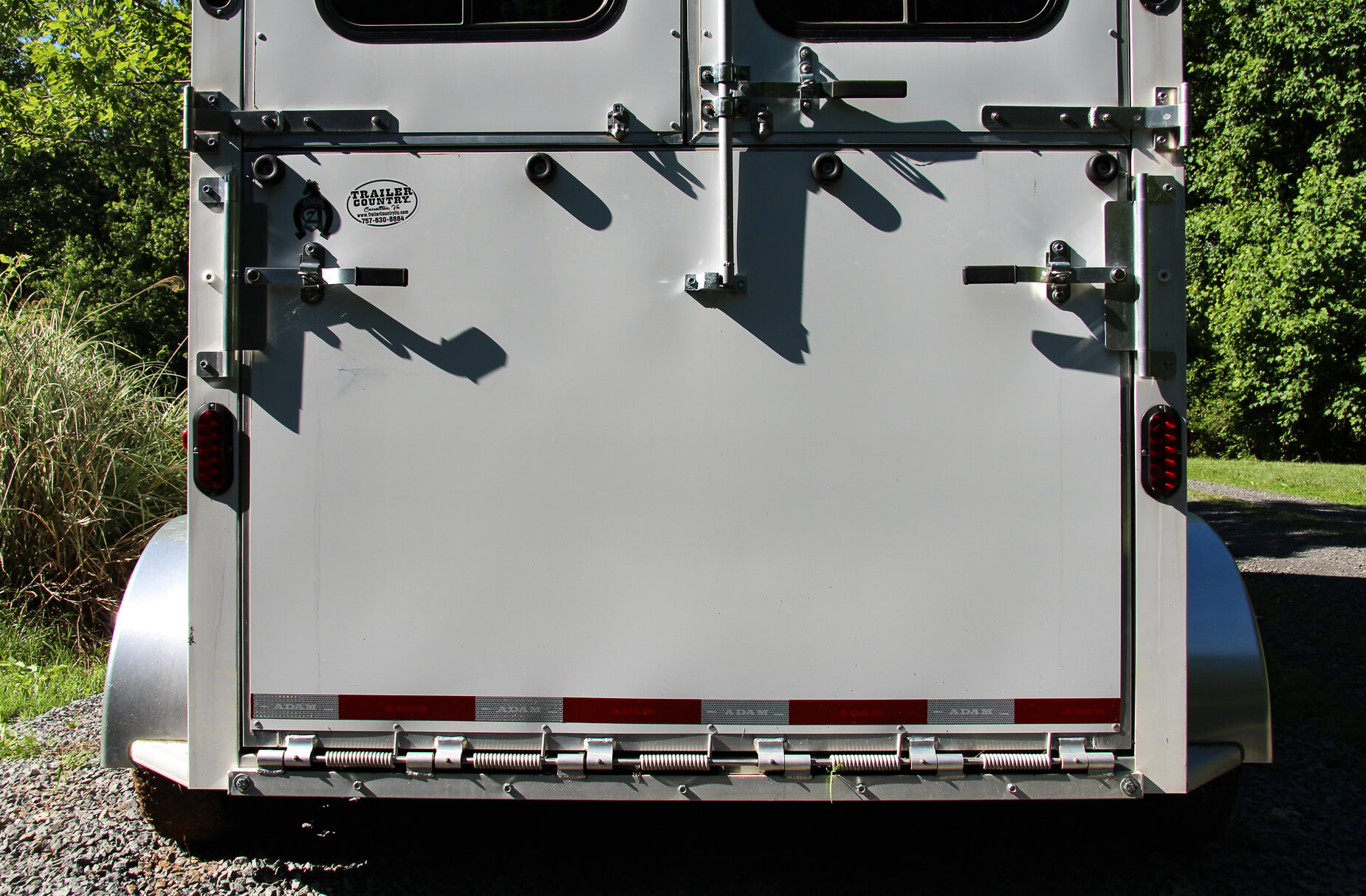 I feel like this one is a little hypocritical for me because I have literally told people that a ramp is not needed. It adds weight, and it’s one more thing that needs repair. The stock trailer had no ramp, and I did lots of trailering with it. I have also borrowed trailers with no ramp, and done just fine. I’ve also seen that sometimes it’s easier for a nervous horse to get in a trailer without a ramp because they can get in nice and close, and when one hoof is in, they are in.

But, it makes me nervous to have a straight load trailer with no ramp. Let’s say in a hypothetical situation I have one horse in there “stalled”. If the horse decides to shift around, yes, there is the butt bar to prevent exiting, but what if the horse puts it’s back leg out, the hoof goes down because of the drop, the horse’s rear drops, the hoof slides under the trailer, THE HORSE SLIDES AFTER THE HOOF?? Maybe a little far fetched. But it could happen.

We spent a while looking, but eventually, we found something that was nearly perfect – The Adam Julite with a Dressing room and rumber floors, very similar to this one. 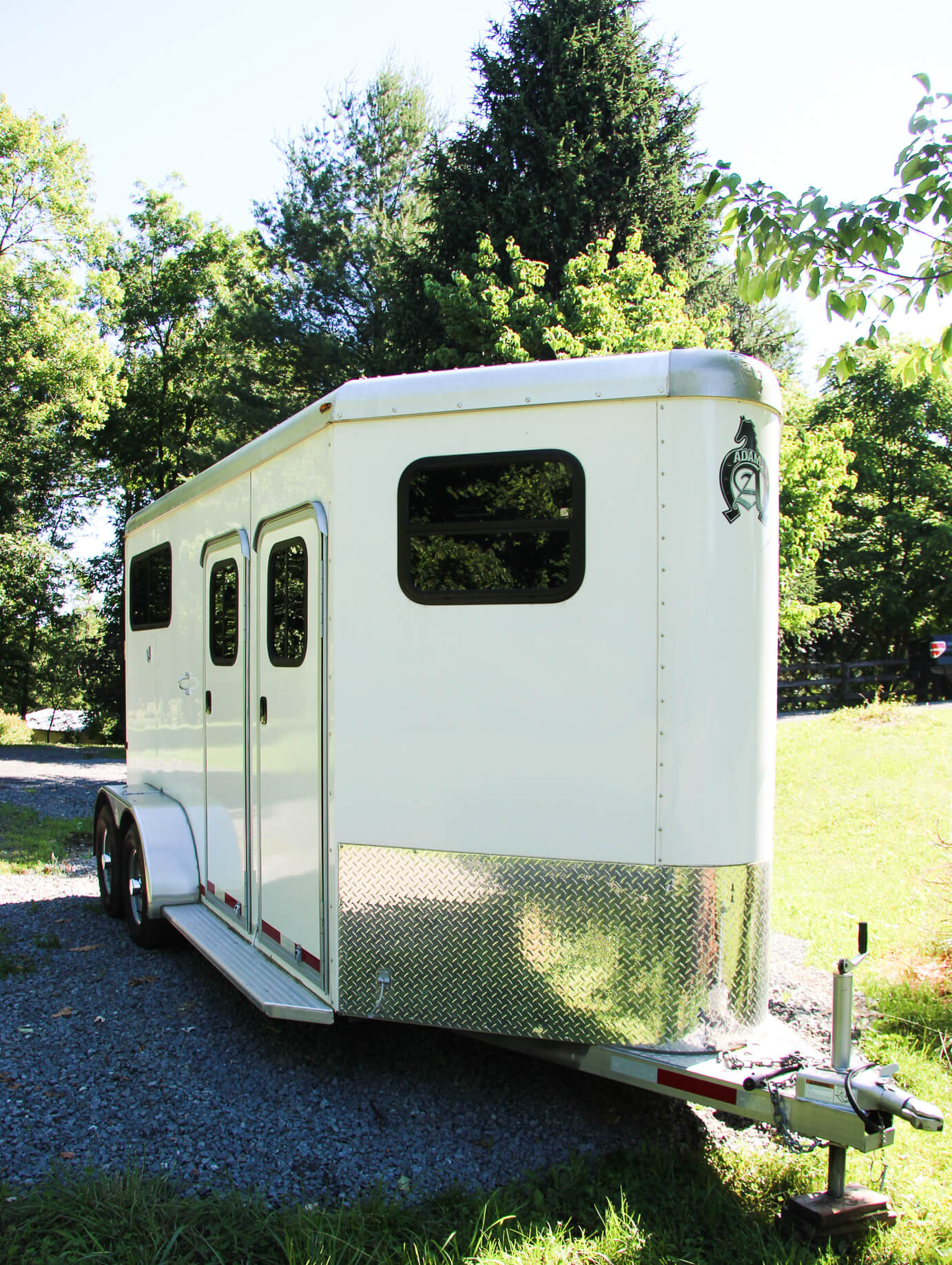 Because I always wonder about these things, I’m going to share this as well – We bought it from a dealer, we paid about $16k for it, and we financed it (not through the dealer).

With the exception of getting a custom trailer, I think there are always going to be things that you don’t like, or aren’t ideal. Sometimes even with a custom trailer, something ends up not being what you expected. I did have one issue with the trailer, but I knew it going into it.

It has a solid partition between the horses’ heads. This could be a positive for some people, but for me, it is a negative.

To look at it positively, it means you can have two horses who may not be great friends, or maybe too good of friends, put in the trailer together, and they won’t be able to nose each other, and bother each other, or steal each other’s food. The horses are in separate stalls, and that’s that.

For me, it means that Berry will be a doofus and strain her neck trying to get it on the other side of the partition. She did it on my old trailer, squeezing herself as far back and she could, and putting her head over the divider and on the other horse’s back. I look back in the mirror, and I have one headless horse, and one horse with two heads. I removed the partition in that trailer so she could talk to the other horse without straining her neck.

I saw a trailer that had bars instead of a solid wall, and that was the dream. She’d be able to see and talk to the other horse but they still wouldn’t be able to touch. Perfect. Unfortunately, we can’t always get perfect, so I gave up the idea of bars, and went with the standard solid wall.

It now lives in the dressing room.

One day I might get a custom weld to get the bars in. Or I could try putting up the partition again eventually, especially with Stu now going in there. But it’s not a big item, and I’m fine with just not having the partition.

I’m sure my needs and wants will change over time. I’m curious, what were your needs or wants? What experiences colored your views? Tell me below, or if you’re a blogger, blog it, and link it below! 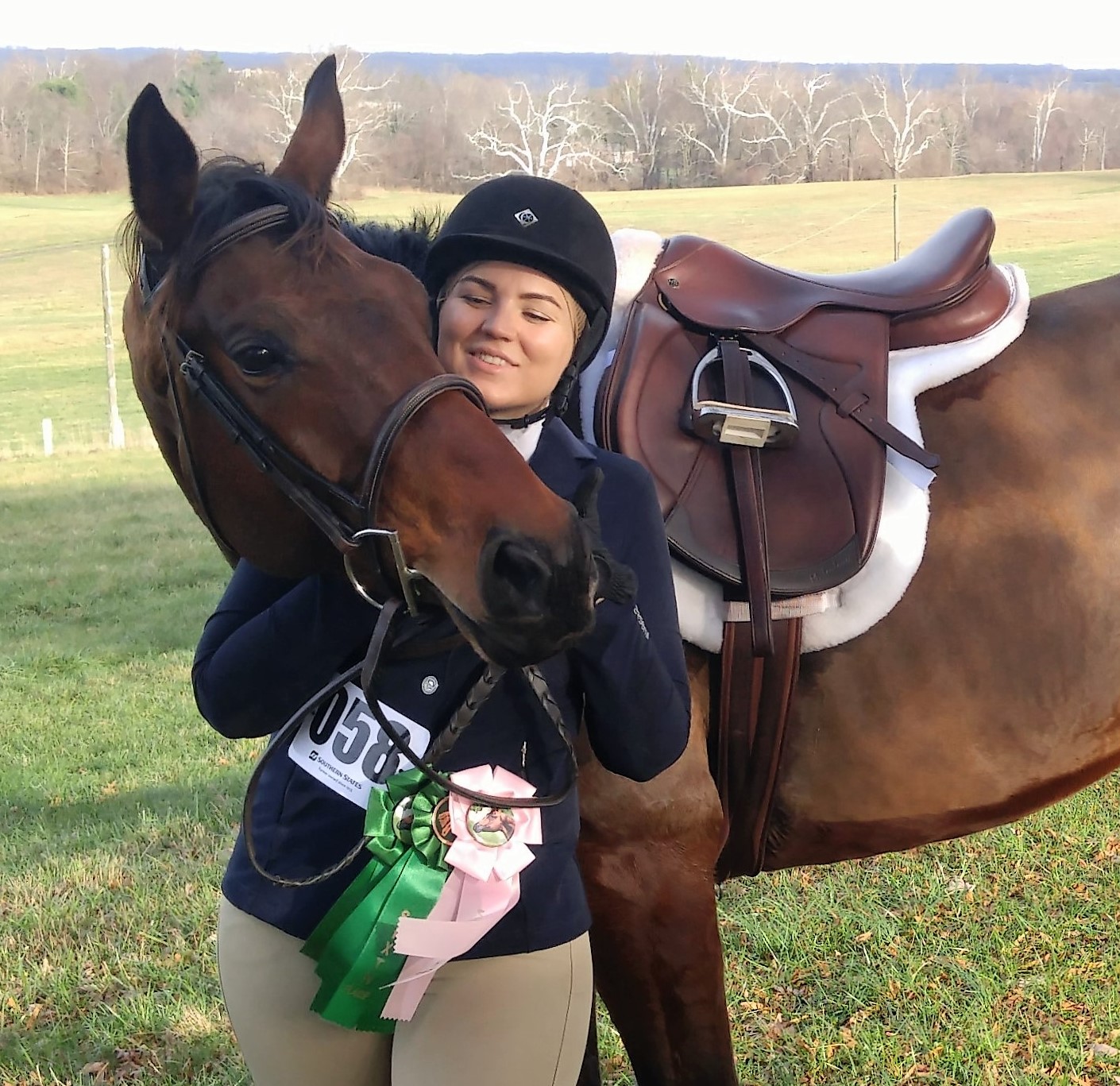