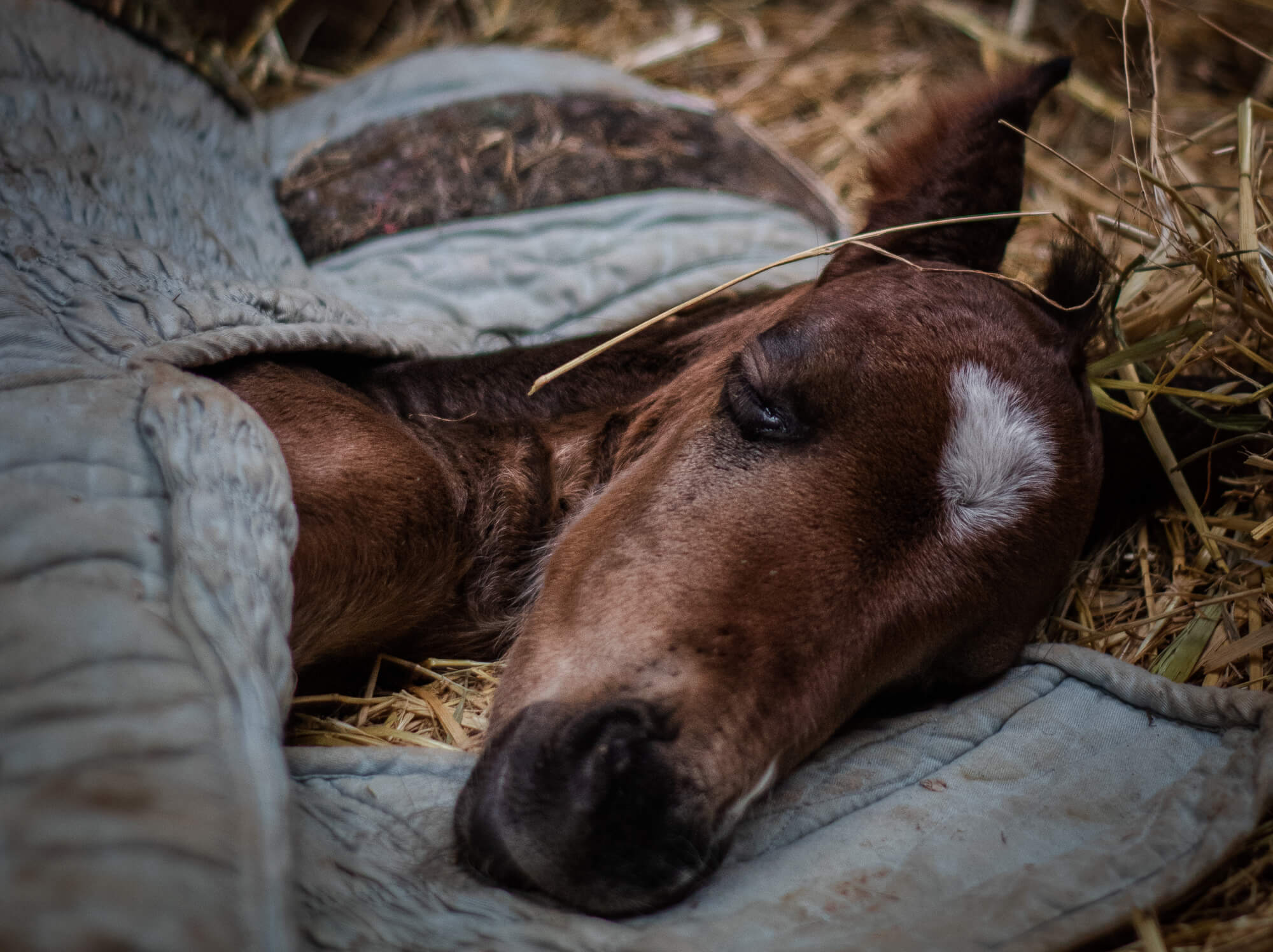 I’ve already been posting about this on Facebook, but not everyone follows me on Facebook. (AHEM, maybe you should!). My friend Sarah has twins – Twin foals, not twin humans.

I’ve known Sarah for 9 years now. I bought Berry from her. I sent Pony to her for training. Sarah is a really interesting person. She used to work with racehorses. She currently runs Alva Glen Sporthorses, breeds warmbloods, and runs a boarding barn. She a great trainer, and even collected a few BLM mustangs, tamed and trained them.

On April 24th, her mare Cricket went into labor. Her pregnancy had been uneventful, and her delivery was, too. A beautiful colt came out, and everything seemed fine – until 10 minutes later when another colt popped out.

Cricket had the usual pregnancy care, which included ultrasounds. A twin had not been visible on the ultrasound. Tiny was a complete surprise.

Horses can produce twins, with thoroughbreds, warmbloods and draft horses having the highest incidence. But for the twins to reach full gestation is rare. For a mare to have two healthy foals is almost unheard of. Often the mare will abort in the first six weeks of pregnancy. 80% abort after the 8th month of pregnancy, and other just losing the foals, the mare  can then suffer from trauma, illness, infection, inflammation, and reduced fertility.

If the mare makes it to labor, the effort of getting both out can kill one, both, or all three of the horses. If the foals survive, their birth weight may be low, and they may suffer complications from being undernourished in the womb.

These complications lead vets to recommend ultrasounding the mare within the first 25 days of pregnancy, and if twins are detected, pinching off one of the embryos. If it’s detected later, they may recommend terminating the entire pregnancy. The risk factor is just too high.

Tiny has come a long way since his birth. He wasn’t able to stand at first, due to both weakness and a crooked leg, and was moved to the center aisle to protect him from his rambunctious brother. With Sarah’s care, helping him to his feet every hour and guiding him, Tiny was able to build the strength to walk. He now gets up and down on his own, and will even run up the aisle.

Unfortunately, being separated from his dam made her forget and/or dislike him, and now she will not take him back. Tiny doesn’t seem to mind though – Sarah is his most favorite person in the world, the bringer of milk and care. He has also made friends with a BLM mustang named Charlotte. Sarah is now using Charlotte as Tiny’s babysitter, and surrogate dam. If all goes well, the eventual plan is to put them completely together.

I went down to Sarah’s to get some pictures and see how I can help her out. She is literally a one woman operation – She takes care of 38 horses, by herself, and is now taking care of a needy foal, by herself. Did I mention she’s by herself? She has no workers or barn staff. She’s waking up during the night to feed Tiny every 2 hours, and then she’s taking care of her other horses all day, and still taking care of Tiny. She might be Super Woman. She also needs a nap.

Luckily she does have some folks who stop by to help her, but it’s not regular help. She’s very tired, and she’s basically in survival mode. Everything that can wait to get done is being pushed back.

Animals don’t take a break from being animals. Rain or shine, or even a worldwide pandemic, they still need care.

Tiny is getting stronger everyday, but there’s still no promises if he’ll make it. The slightest fever could bring him down. It is looking good though – he is acting like a normal foal, and that is the glimmer of hope that he’s going to be okay.

The main focus right now is just him surviving, but I will admit, I was curious about the logistics of how he will be registered with his warmblood registry. Tiny and his brother are warmbloods, sired by a warmblood stallion. Now she has two warmblood foals for the price of one stud fee. A nice two for one deal. (“nice” being subject to interpretation.)

Sarah said she’d gotten this question a few times already, and even joked with the stallion owner about it. No, Sarah will not have to pay another stud fee. He should be able to be registered, if he makes it.

Tiny has become a little bit of a hero right now. He was born into incredible odds, and is some how pushing through it all. I think we all needed a little Tiny in our life right now. Follow his journey on his Facebook page.