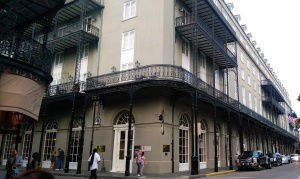 The French Quarter is the main tourist area of New Orleans. Most tours (ghost, swamp, plantation) are based out of there, there’s daiquiri stores on every block, live bands set up, and hotels everywhere. There’s tons of stores, souvenir, candy, crafty home made items, and then the types you would find at home, CVS, Walgreens and voodoo. There’s also tons of homeless people and beggars. Even though I walked around by myself quite a bit (but never at night) I felt perfectly safe. There is a large police presence there though, as previously the crime was so bad they were afraid it would effect tourism. 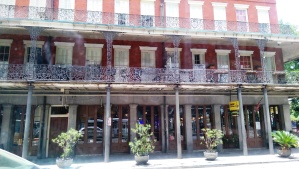 I stayed at the Marriott on Canal Street. Canal Street is the biggest street in New Orleans that separates the French Quarter with the Business District. There were tons of hotels everywhere, but I’m pretty sure The Marriott was one of the biggest. It’s a huge conference center, and was therefore expensive. 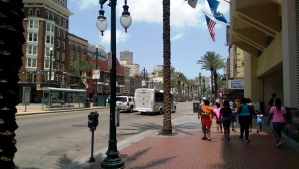 Canal Street view, with the Marriott on the right.

It wouldn’t have been my first choice, but I did not have the option of choosing where I was staying on this trip. I wouldn’t stay there again (unless I was staying under the exact same circumstances and therefore had no choice), I would stay in one of the smaller boutique hotels. I felt like I was being nickel and dimed, WiFi wasn’t included, room service was expensive. I can’t think of what else, but it just seemed a bit much. 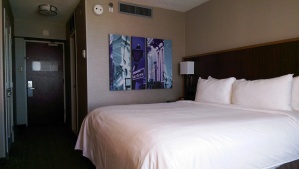 The main price of the hotel goes to keeping those sheets white! Before I left I was sure to eat spaghetti on them. There was a plate and a napkin between the spaghetti and the bed though. I’m not that much of a jerk.

Two streets down is Bourbon Street, which is the main hub of debauchery. This is the where you go for Mardi Gras craziness. On my first walk through, it seemed quite tame, but it was also early in the day. 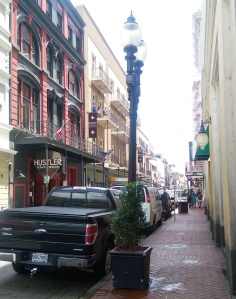 Upon first walk through. There’s the Hustler Club to the left. I naively though that was the extent of the selling of sex.

There’s a huge grid of streets that look similar to above (minus the Hustler). Heading south, there is the French Market, basically a giant flea market. It reminded me of when I was in Bermuda, there was a similar set up. I didn’t get a picture of the flea market part, but here’s the dining area of the French Market. 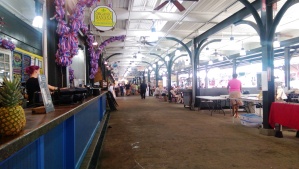 There’s so many beautiful buildings there I could overload this post with photos. My favorite was this one, because it’s the color scheme I want for my house. 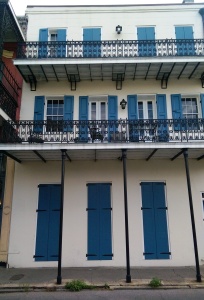 Soon you shall be mine, colors of paint. 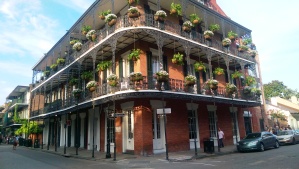 So the day goes on, and I went to an early dinner and this band played my entire dinner! 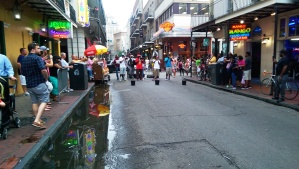 The hurricane is New Orleans’ official drink, so I had to have one (or several) 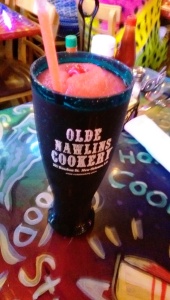 Frozen, not stirred… you know, except for the stirring of the blender.

So now moving forward to day two, after I made some friends, we decided to go out. 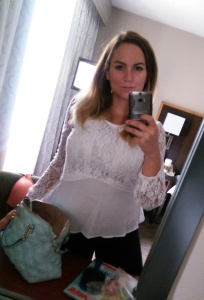 We didn’t go to dinner in the French Quarter, but I had a dinner of shrimp and grits, two things I never thought should go together. It was amazing. Other people in the group ate raw oysters. That was a bit too gross for me.

We went to Bourbon Street, which is a whole different ballgame at night. Live jazz music played from every bar. There wasn’t just the one gentleman’s club, there were tons of strip clubs, and the strippers spilled onto the streets to entice patrons in. There were women wearing nothing but underwear and nipple pasties with signs “Tips for Pics”. 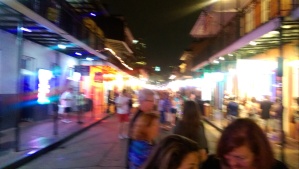 We went to O’Reily’s, where is apparently a must see due to the flaming water. 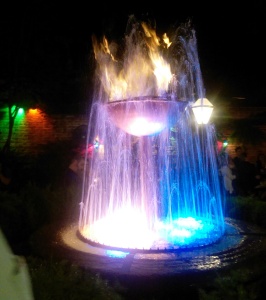 Whatevas, I totally have one of those at home.

It was there that I tried alligator. It was gross, very chewy and weird. Not sure why anyone would want to eat it. I wouldn’t have eaten it at all, but I gave into peer pressure. It still happens, even as a grown adult. 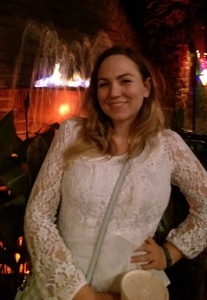 And then sauced on hurricanes and daiquiris.

Somehow these people have some kind of super endurance, so we went to yet another bar and watched a jazz band play. 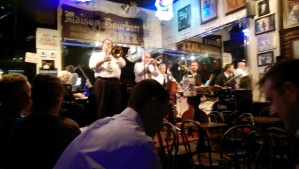 It was midnight at that point. I went back to the hotel to collapse and wonder how people 10+ years old than me can manage to party the whole night with work in the morning. Must be an acquired skill. They probably have it on their resumes: Strong ability to stay out entire night and manage to get up and still look good for morning meetings. I do not have this ability and this was one reason college was difficult for me.

Stay tuned for more New Orleans! I still have more on the French Quarter, but I’m lumping that in with the ghost tour. Additionally, I have insects for you. Lots and lots of insects to haunt your dreams. I find them scarier than the ghosts.