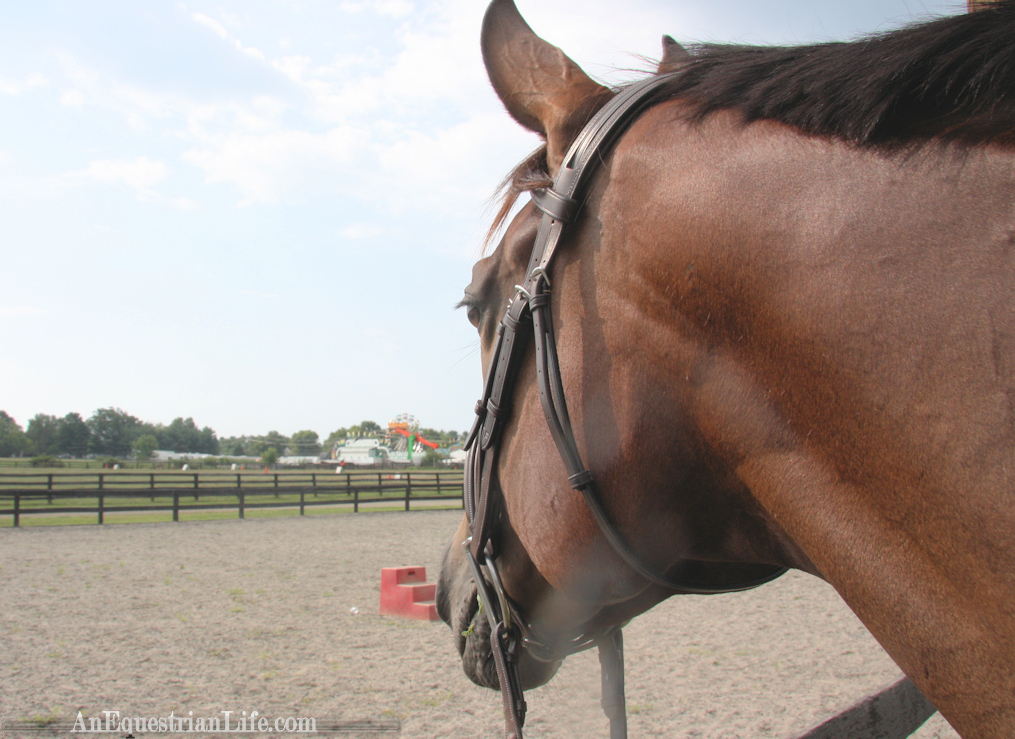 This is the second try to determine if the TTouch characteristic evaluations can accurately determine a horse’s personality. Vintage was the first try, and did not leave me convinced. Just like the psychics you can call, the information given was vague, with a few accurate bits, and that’s just not good enough.

I’ve owned her since she was 2. She raced once, but showed no talent at it, at all. For the last year and a half, she’s been doing hunters. She’s my main horse, and I take her to shows, trail rides, and any other fun thing I can think of. 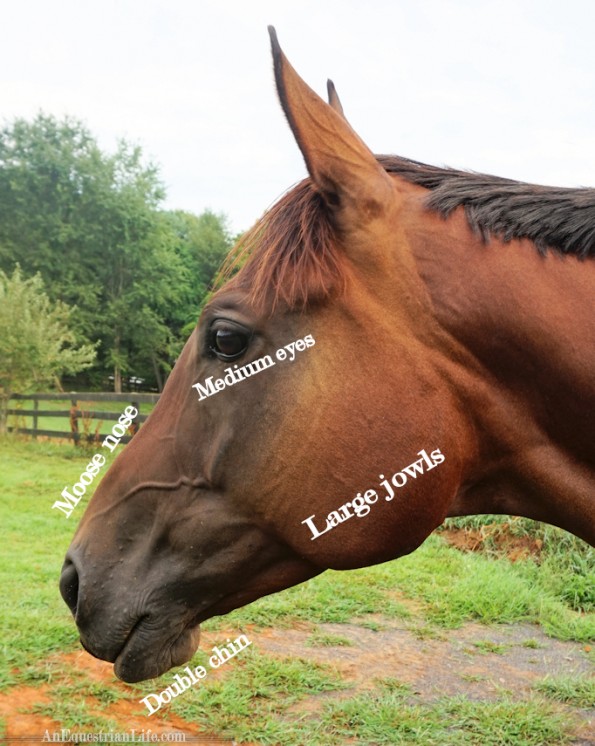 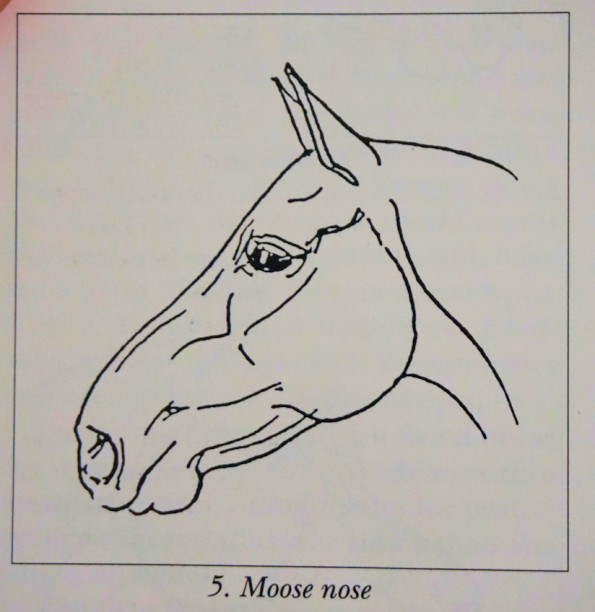 TTouch say: Bulge on the lower part of the nose and usually indicates a horse with a strong character, frequently a herd leader. Berry is not the herd leader, she’s right smack dab in the middle, and with her previous buddy, she was the low one. She does have a strong character though.

They look huge to me, basing this on they seem to take up the majority of her face, so I’m going to call this “Large and round”. 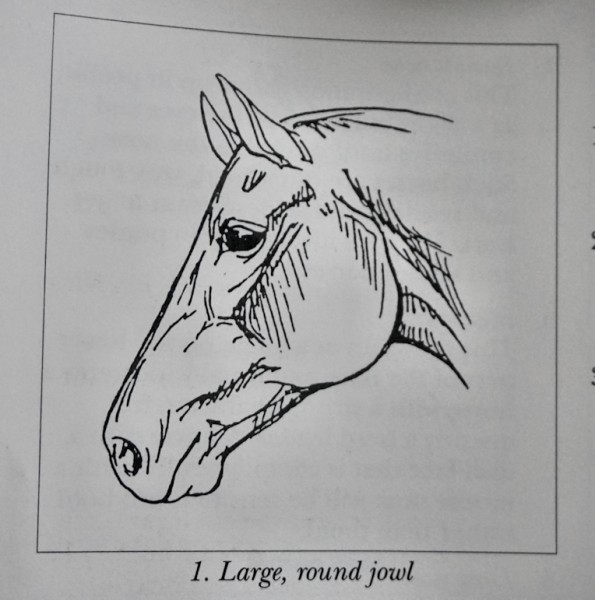 TTouch says: Horse tends to be intelligent and cooperative. I totally agree! She is super cooperative, and I think she’s intelligence, despite what Dave thinks about her…and the weird things she sometimes does. I think that’s just a further show of how intelligence she is though. She’s experimenting with the world.

I took a few minutes to debate this, because her nose doesn’t really look like any of the noses in the book. I cannot decide between “Sloping muzzle with moose nose”, or “Square muzzle.” She doesn’t look sloping enough to have a sloping muzzle, but her lips seem to protrude too much to make it a square muzzle. Maybe she’s such a bizarre looking horse that no one is sure what her muzzle indicates?! 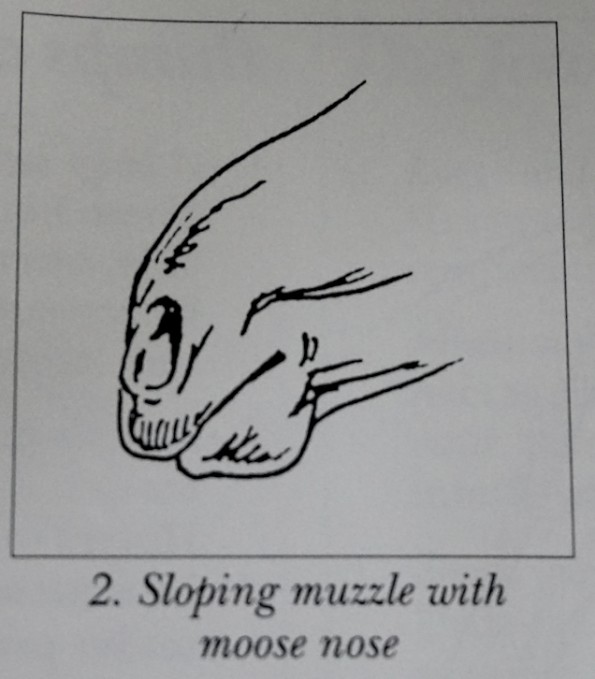 TTouch says: Sloping muzzle with moose nose – a dominant character. I really don’t think she’s dominant. She’s not passive either, but she’s more go with the flow, “Sure, whatever you want to do sounds great!” personality. 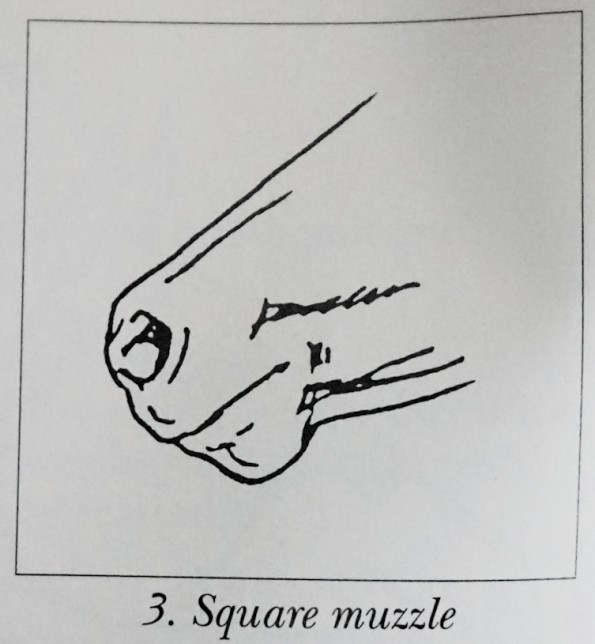 TTouch says: Square muzzle – Tends to signify a stable, uncomplicated nature. If we were choosing muzzles based on personality, this would be her. Except for when she goes into a raging heat, she’s as dependable as a 7 year old thoroughbred could be.

In this photo, her mouth looks very short, but I don’t recall it being so short usually. I think it’s more of a medium, like Vintage’s. But, since this I’m going to base off this photo, let’s go with short. 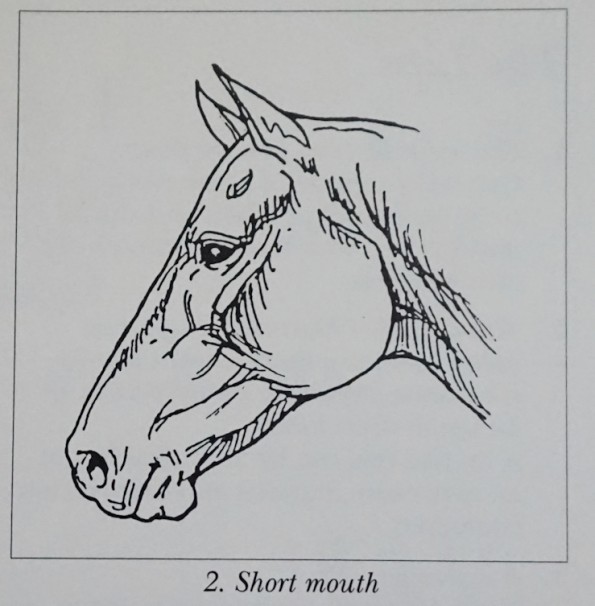 TTouch says: This can signal inflexibility and a horse who is slow to learn. It’s hard to fit such horses with a comfortable bit, and generally they do better without one, i.e., with a type of hackamore. My immediate reaction to this is to say no, she’s not inflexible, nor is she slow to learn. But it did take her a long time to figure out she has to lift up her legs to go over a jump, and not just crash through it. But, I’m still thinking that’s not enough to say she’s a slow learner. 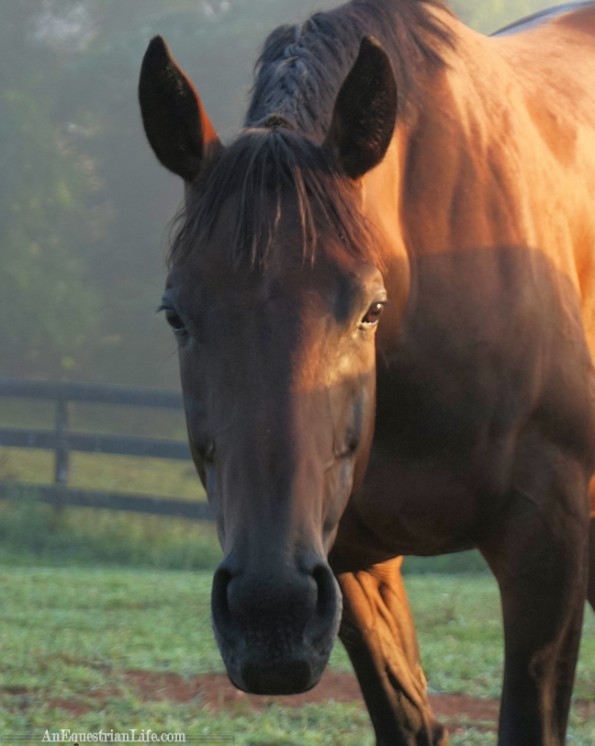 Not complicated, she’s got a flat upper lip. 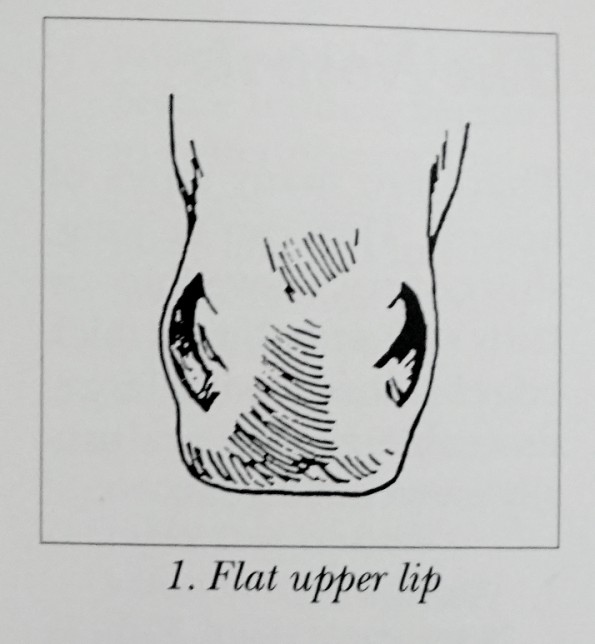 TTouch says: Generally signifies a horse who tends to be quite independent and single-minded and who tends to mind his own business. She can be pretty independent, like she has no issues going out riding by herself, on the farm, and off, but in the pasture she likes to at least watch whatever is going on. She’ll wander off to graze alone, but she likes following me, or the other horses, so she’s not 100% independent. I’m also not sure how a horse can be fully independent, as they are herd animals. What degree of independence makes a herd animal considered independent?

She has average sized nostrils. 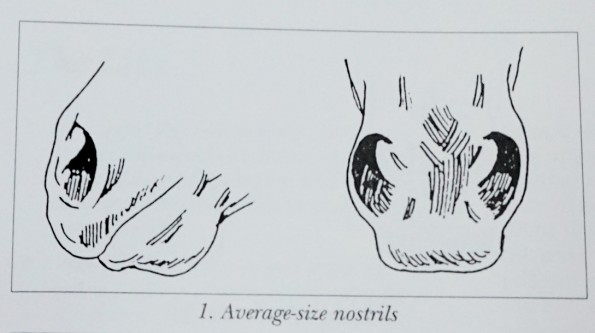 TTouch says: As wide at the base as at the top; signals average intelligence. Sounds pretty neutral, but I’ll accept it. 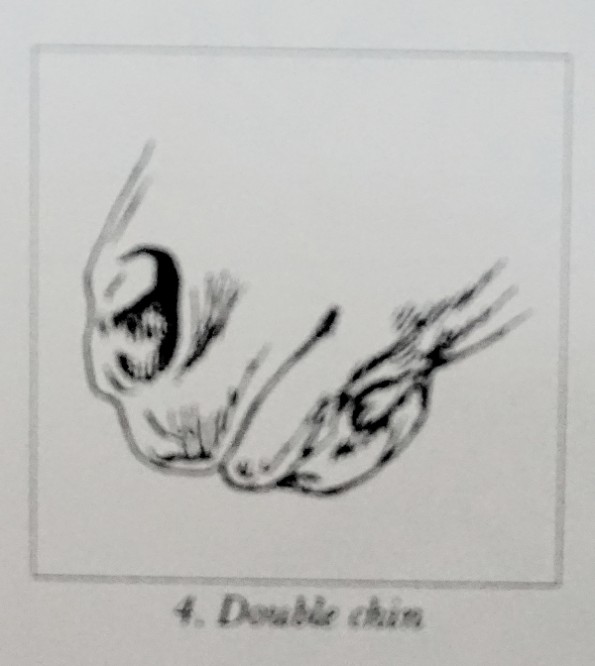 TTouch says: Horses with this type of chin are usually clever. That does sound like her. I think she’s very clever!

They look medium to me. 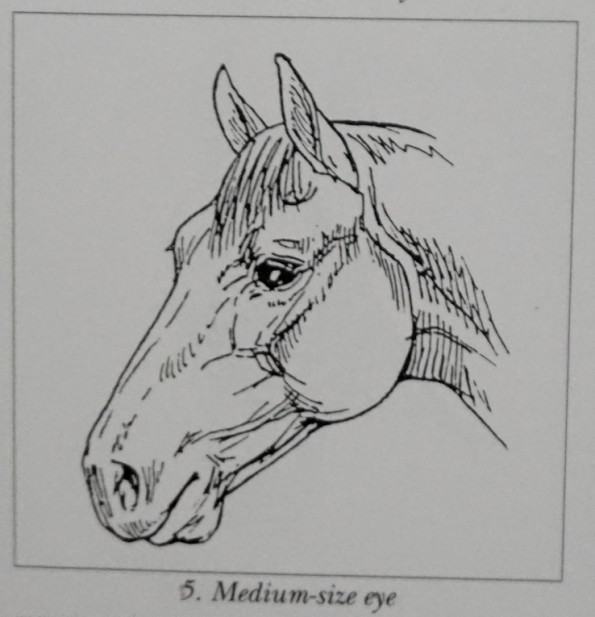 I looked through a few pictures to be sure this one wasn’t just a weird moment, but I have confirmed that Berry’s ear points are wider out than the base of the ear. 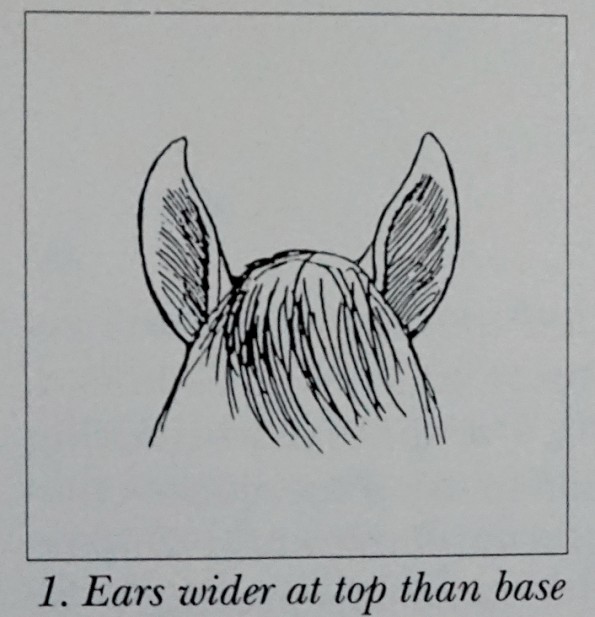 TTouch says: Indicates steadiness and a tendency to be uncomplicated. Completely right.

Once again, I have a horse with a single, long swirl. 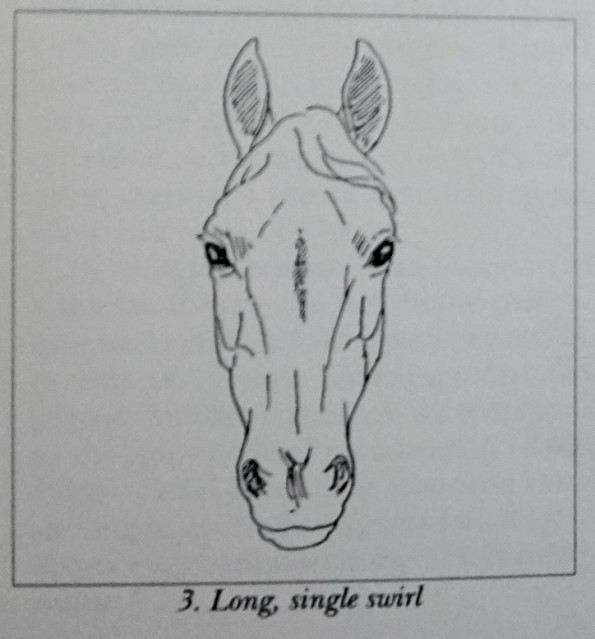 TTouch says: Indicates a horse who is friendly and particularly enjoys relating to people. This sounds right for Berry. She’s a very friendly horse, and loves interaction.

Overall, I think this was much more accurate for Berry. She’s mostly uncomplicated, steady, and friendly, which is basically what the results showed. But I feel like it is almost too easy to say that. It’s too vague and broad. I’m not convinced this is legit yet. We’ll see how Pony’s reading goes.