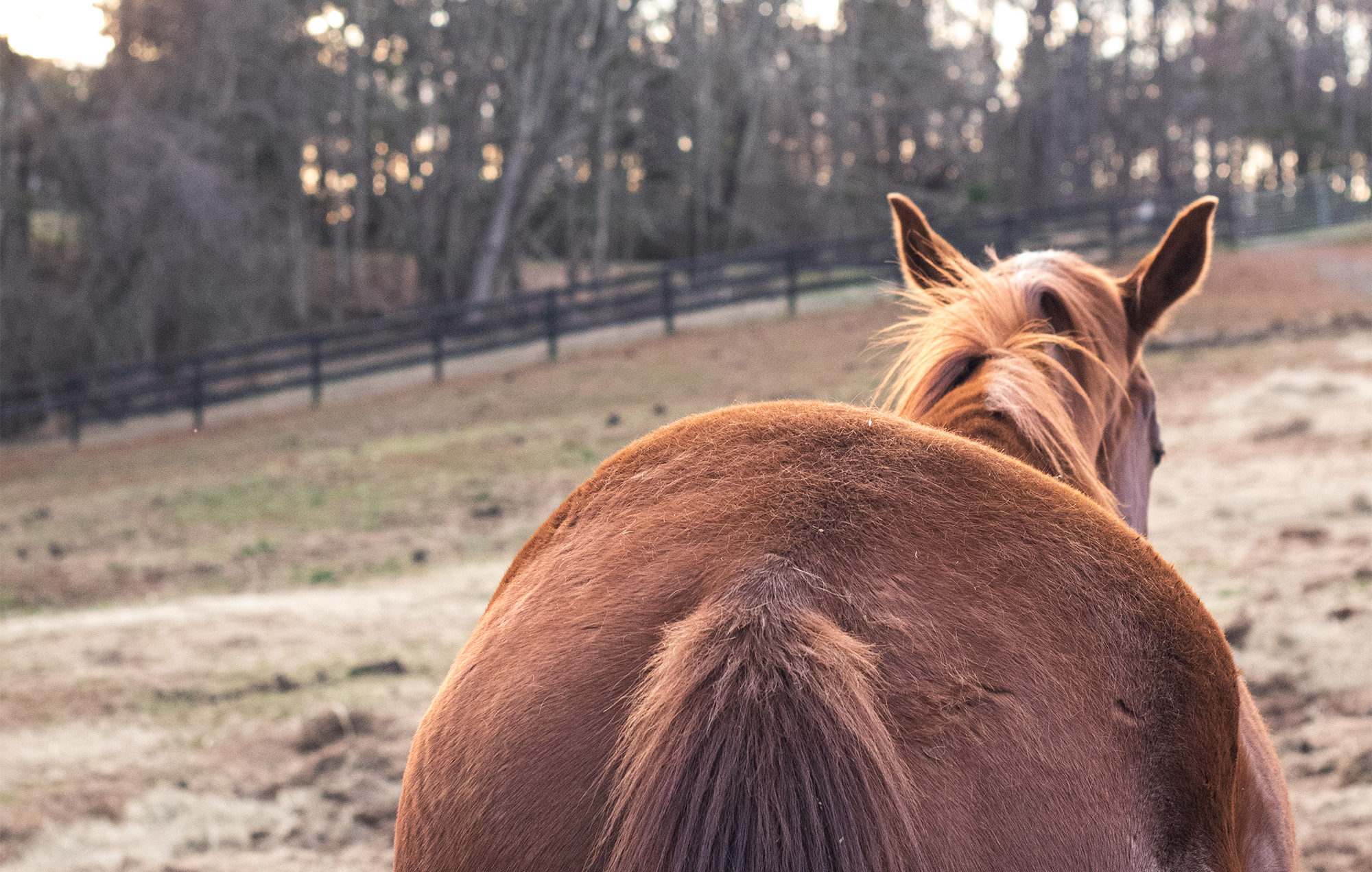 I find TTouch fascinating. I don’t know if how accurate it is, but it does seem to have some truth behind it. It’s more accurate than palm reading, but it seems to fall into that realm.

TTouch was created by Linda Tellington-Jones. It’s both an encyclopdia of horse characteristics and how they relate to personality, and a series of touches that influence the personality of the horse. I haven’t utilized the Touch part, but I like to look at how different aspects of appearance relate to their personality.

I wanted to take a look at Stu’s personality – He’s been a bit of a handful, which I’m primarily blaming on a lack of attention while I was pregnant and first year of baby’s life. But I wanted to see if I could understand more of his personality to help with working with him going forward.

I had assumed that he had a straight profile, but by using the ruler tool it’s apparent he has a slight moose nose. A horse with a moose nose is described as “usually indicates a horse with a strong character, frequently a herd leader.”

He does have a strong character, and I think he would be herd leader if the other horses had any respect for him. But they don’t, he’s more of an annoying fly to them. But he continually challenges them, so I could see the dynamic shifting eventually, or if he was in a new herd, he might try for higher in the pecking order.

Based on my struggles to get him to lunge, that sounds about right.

At first I wasn’t sure what shape his muzzle is – it didn’t seem to match any of the pictures in the book. But I took a long at some other photos, and it appears to be a sloping muzzle, described as  having a strong tendency to test each new rider to see who is going to give commands. It’s noted that the greatest extreme of this is in warmbloods.

It’s interesting to note the change in the muzzle. TTouch points out that horses can change their attitudes based on how the training is going/suits them. Obviously some things can’t be changed because there’s bone, but many of the soft tissue changes can indicate their feelings, just like facial expressions on humans.

Relaxed chin, medium thickness. Indicates a steady, cooperative horse. Honestly, once he does understand something, he does seem cooperative. Even when he’s being high strung, I don’t have problems with basic handling.

“Long mouth” – Indicates sensitivity and sometimes a highly active intelligence and an ability to learn very quickly, a combination that can often result in a horse being misunderstood or considered difficult. Horses who learn quickly but are subjected to lengthy routines get bored and look for ways to amuse themselves, behavior which is often erroneously interpreted as “a bad attitude.”

“Flat upper lip” – signifies a horse who tends to be quite independent and singled-minded and who tends to mind his own business.

He can be both independent, and very dependent on the herd. I suspect he’ll get more independent as he grows older/goes through training.

Well, I hate to write this one down, but it looks like Stu’s got small eyes. Horses with small eyes are frequently inflexible and slow to learn. They do badly under pressure and become very resistant.

Well, sounds bad… but Vintage has small eyes too, so maybe not the end of the world? Interestingly, I didn’t note this in her evaluation. Not sure if I was distracted or avoiding the truth.

I think he’s narrow between the eyes, but I’m not quite sure. This indicates slower to learn, but notes that this isn’t undesirable. It is often preferable to have a school horse or beginner’s horse be not too smart. Once a narrow faced horse has learned a lesson he usually retains it and can be an excellent worker.

I hope this would translate into a steady worker once he’s trained. I guess we will see.

Ears up, same width at top and base. Indicates likeliness to be energetic and a bit hot.

This would be out of character for him… he seems pretty lazy mostly. The exception being he always wants to play, much to the annoyance of the herd.

Double swirls – Horses with these tend to be more emotional and overreactive than average. They tend to become upset without apparent reason, and at unexpected moments.

It’s noted that this holds true 70% of the time, but horses with two adjoining swirls can be great horses, but, generally horses with this pattern are not ideal for inexperienced riders.

I don’t consider myself an inexperienced rider, but I also don’t like the way this sounds. I just wanted something easy!

Overall, the characteristics do seem to describe him, even putting adjectives to his personality that I hadn’t thought of before. It looks like I’m going to have a handful of a horse – he’s slow to learn, can be overreactive, and tests people. But it does sound like once he’s trained, he’ll be a good horse, I just need to get to that point.

It would be interesting to look at this again once he’s had more training and see if it still seems true. Or, to see if anything about his facial expressions changes. There is even a section of the book that talks about how a horse’s eye went from small and piggish to large. Maybe he just hasn’t been interested in much, and will be interested eventually? We will see!

I bought this book when I was a kid, and I just looked at it on Amazon – It’s pretty expensive! One version is over $900! I think this book is out of print, and there’s a new version out. It looks like it has been expanded from the version I have.