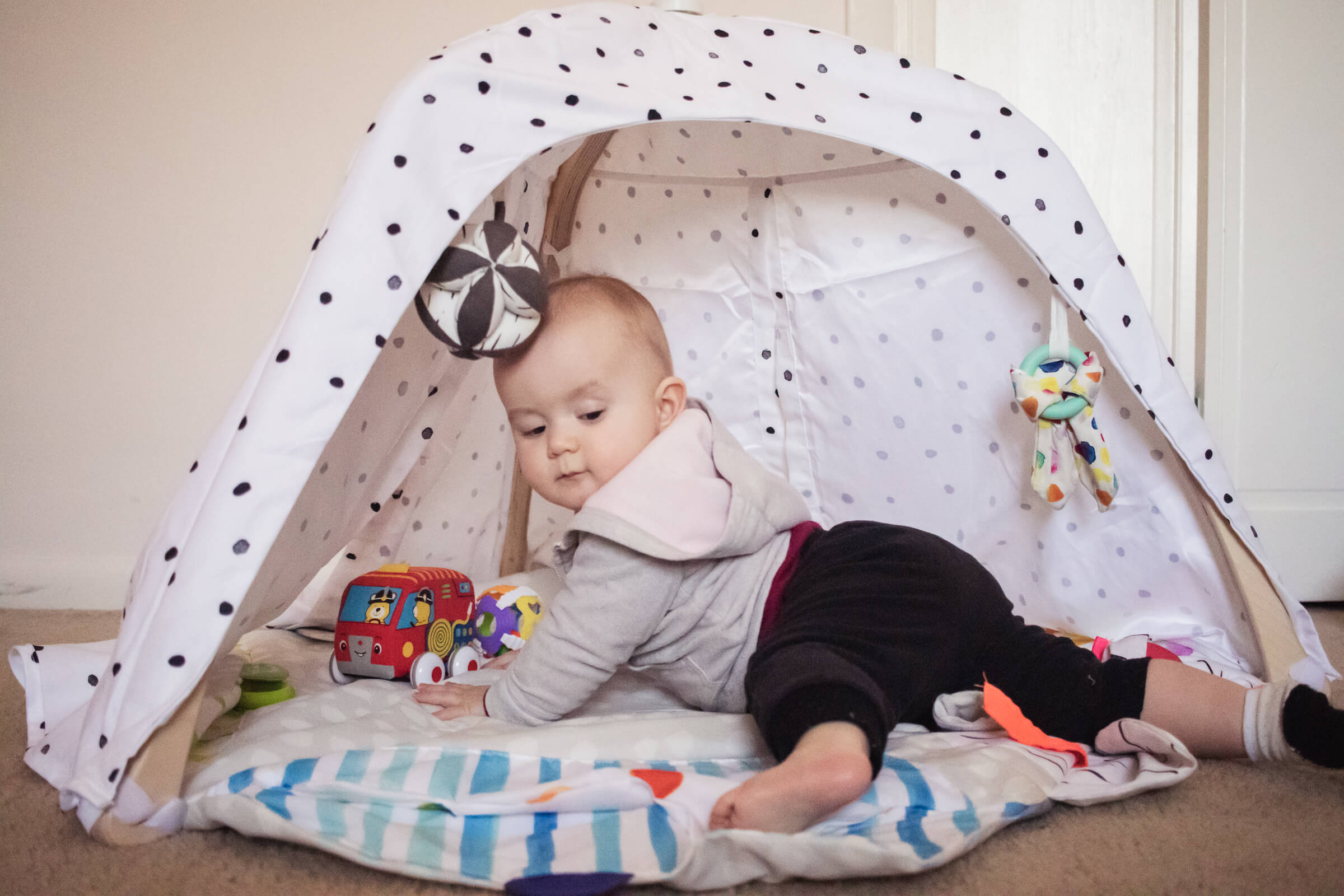 So, wow, I’ve come to the exciting time of having a mobile baby. She’s past the “lay there and look cute” stage, she’s got a lengthy agenda of things to do, and no time to just sit around. She is constantly on the move.

She just learned to crawl. As in, yesterday. She was taking little bitty crawl steps, and she actually still is, but before she’d take three steps and plop to her belly. Now she’s a little machine, crawling all over her bedroom. She embraced it fast. As soon as she realized she could, she did. It’ll be interesting to see if the hot dog rolling continued. That was her previous method of travel, and she was good at it. She’d roll, stop, pivot to a new direction, and roll again. She could get around pretty fast.

She’s up to my thigh now, if I stand her up. She can’t balance enough to stand without support, but she holds herself up well. She lifts her knees up really high and puts her foot foward. I help her balance, but she’s got the muscles for it. I’m pretty sure she’ll be walking in a few weeks. Or at least hopefully in time for her first birthday party!

She’s such a happy baby! I’m sure many people say this about their babies, and well, mine is too! She really seems to like the camera, too. It’s easy to get happy photos of her because she lights up when I pull it out. I do not understand why it gets her excited, but I’m happy about it.

Her absolute favorite thing to do is explore. I’m excited about this in theory, as I would love to explore the world with her, but right now…well, I’m basically constantly chasing her. I want her to explore, but I also don’t want her to stick small pieces of things in her mouth, or pull out the dresser drawer, or smash into things. You think you’ve baby proofed the room, and then suddenly, she finds that the rubber stopper behind the door actually comes off. Luckily she became suspciously quiet and I noticed quickly.

She had a few weeks, basically Thanksgiving until after New Years where she would no longer sleep during the night. Life was painful, as I had to get up anywhere from 3 to 5 times a night, every single night. This is what new parents complain about, I was just lucky in the begining. The exhaustion is a killer. All I wanted to do during the day was nap to recover, but I had things to do, and somehow the baby didn’t need a nap so there was no recovery. There was exhaustion, pleading with her to please sleep tonight, and seemingly no end in sight.

We talked to her doctor about it, with no solution. I’ve learned that the main, and possibly only, solution to any baby behavioral issue is to just wait it out, because it’s probably just one phase of a million different phases they will go through.

It seems like we are finally getting through that phase. She’s still waking up at night, but only like 1 or 2 times now. I never thought I’d celebrate that, but I’ll take it! Hurray for slightly less interrupted sleep!

She loves to talk to people, even if her words are mostly all gibberish. She says “Mama,” and “Dada,” and what sounds like “baba,” for bottle, but the rest of it is gibberish. She makes really cute little noises that we like to imitate now. I think she likes it too, because she’ll smile and do the noise again. She is definitely trying to imitate us – she’ll stick out her tongue if we do, and start clicking her tongue if we do. She’s also big into waving. She waves at everything: us, the dogs, random people, things that aren’t there…hopefully not ghosts.

With the random people – I have never met so many random people before. People love babies, especially babies that are waving at them. I will fully admit I am an introvert so it’s hard for me to just talk to random people, but my extroverted baby is a great icebreaker. She loves attracting random people. But on the flip side, some people don’t care about her waving at them, and then I feel disapointed on her behalf. She doesn’t seem to mind too much though. It hasn’t dampened her enthuasm for waving.

Overall, it feels like I have a puppy, and this puppy likes to go everywhere, chew on everything, and is enthusastic about nearly everything. But also, the puppy can never be left alone for a second and has way more energy than me. It’s like a puppy combined with the energizer bunny.

I am seriously considering one of those kid leashes though..or maybe something so I can lift her up and hook on me for moving around, and then when we reach our destination, I can put her down and she’ll have her leash. It’s a pretty good invention I think!