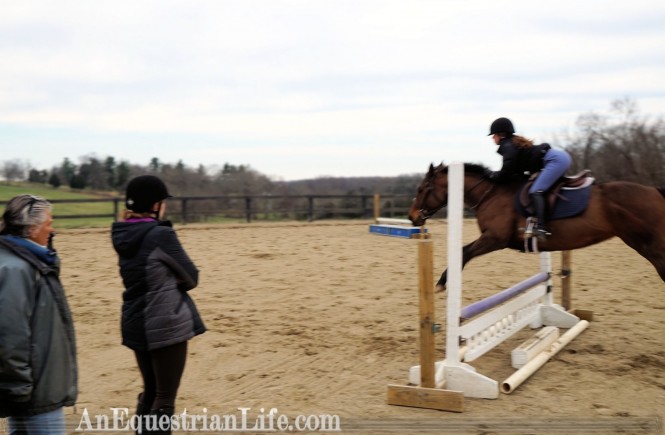 We were on what felt like the millionth exercise to teach Berry and I lead changes. We started going down the long side, circling, leg yelding back to the rail, and asking for the change. The leg yeld was easy. The change was not, and wouldn’t happen. I could sense Berry’s annoyance. I ended up asking for yet another simple change.

My trainer set up a figure 8 pattern with a jump. After the jump, I was to set up for the change, and if she was on the wrong lead, I’d ask for the change. the end result was a pissed off, head tossing Berry as she attempted to figure out what on earth I was asking her to do.

I was getting worn out from asking, and after one frustrated circle, I tossed my reins down (Berry knows this is the signal to stop) and burst out, “Can’t (amazing good rider) get on her and teach her?!”

My trainer considered this for a moment, and to my surprise, agreed. 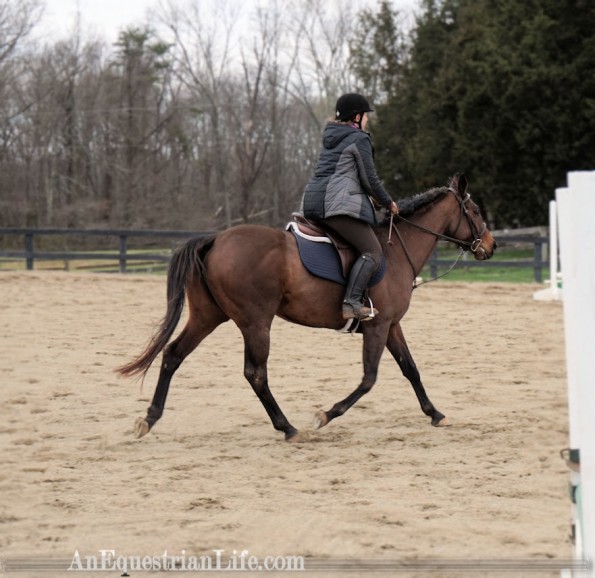 Because of this, it was a little hard to accept this – I can’t teach my horse lead changes. I have been trying. I’ve had many lessons working on getting the change. One day at home, I did it on my own, and was so pleased I was planning to write about having accomplished creating lead changes on my horse. Luckily I did not, because I would have been speaking too soon. Berry did not have her lead changes. The day she did it was a fluke.

But there are just some things I can’t do. I’ve only done lead changes on made horses, and when I actually did them, it resulted in my own confusion in having actually accomplished it. None of my horses have ever had a lead change, and thus, I have definitely never taught a lead change.

Berry has been really good in the time she’s been under saddle, and I think we’ve been doing well without a trainer having sat on her. But based on how pissed off Berry was getting, and how frustrated I was feeling, I realized that I really, really just wanted someone to help me with this one. 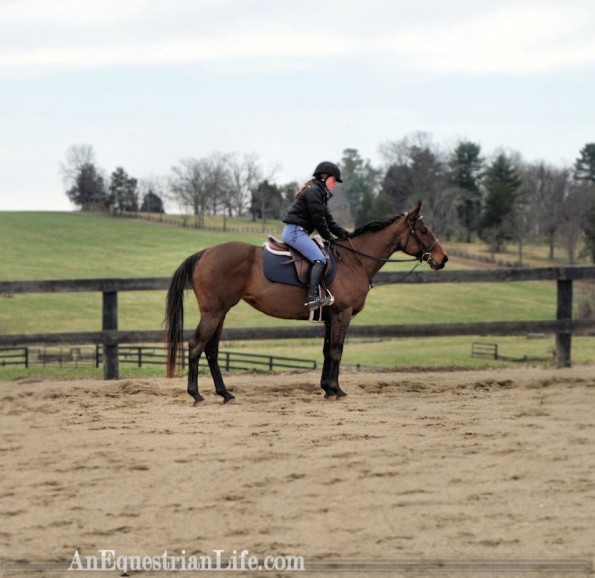 Thus entered Amazing Skilled Rider Who is Super Talented and Always Wins at Shows. (ASR for short). She most definitely looks better on her than I do. Saying I’m a little jealous is putting it mildly.

She wasn’t there the day I was having issues with the changes, my trainer had to arrange time later for us to meet up. I managed to squeeze into a time between two of her rides. ASR rides several horses a day and doesn’t have unlimited time.

She got on Berry, and they did the exercise that we’d be working on, the figure 8 with the jump in the middle. A lot of the time Berry landed on the correct lead, but the times she didn’t, ASR immediately got after her, getting her to change that lead. 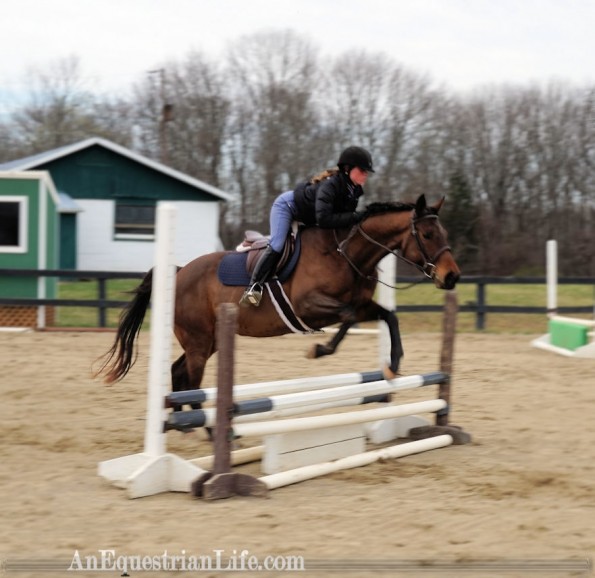 When I ride Berry, I try to be “kind”. Berry is so gentle and good natured, I feel bad getting after her for anything. When I expressed this to my trainer while watching ASR’s way more assertive ride, she basically told me I’m soft, but not in a good way. I’m soft in the way bread dough is soft. Just a squishy lump that can be molded into different positions, but that offers no support or assistance to the horse. Ouch.

ASR was no squishy lump. It’s both educational and inspiring to watch someone better ride my horse. She was direct with her aids when she needed to be, and other times, she was supportive while letting Berry figure herself out.

It was interesting to watch how my horse moved and jumped. She puts in basically no effort to jump, and likes to just extend her canter stride to get over it. My trainer said she probably won’t put in an effort below 2’6″.

Even though ASR was riding assertively, Berry looked happy. She didn’t seem annoyed by the lead change corrections, and I noticed she’d halt immediately when ASR asked her to, still looking happy as a clam. I really was inserting emotions in for her that don’t exist. It really was enlightening, and gives me inspiration to be more direct in my aids for my next ride.

The only thing that confused me was when Berry refused. 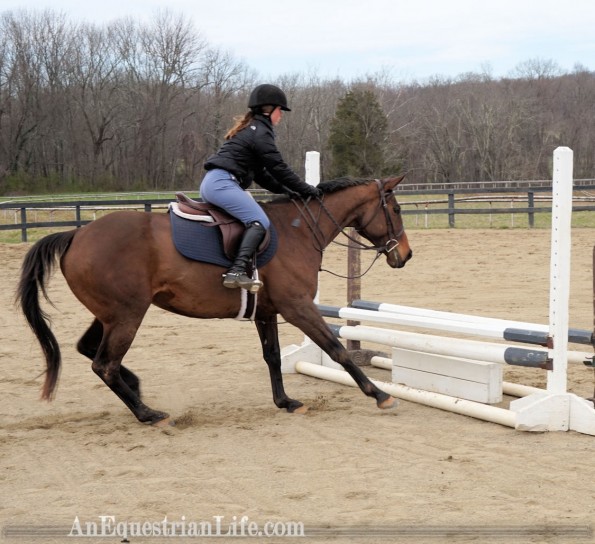 This was confusing because it seemed like ASR was asking her to halt before the jump, but in the picture it looks like she was preparing to jump, so I don’t know. But I think she has some crazy horse sense, because after the refusal, ASR simply patted her, told her she was a good girl, and then circled and jumped it like it was nothing. No more refusals after that. I wish I’d asked trainer what the heck just happened there, but for whatever reason, I didn’t.

Berry still doesn’t understand lead changes, so we are planning another meeting of ASR and Berry, to get do more schooling. Or, I need to get myself organized and keep working at it. I was successful in getting a flying lead change one time at home, so perhaps I could do it again. I do have some riding inspiration now! 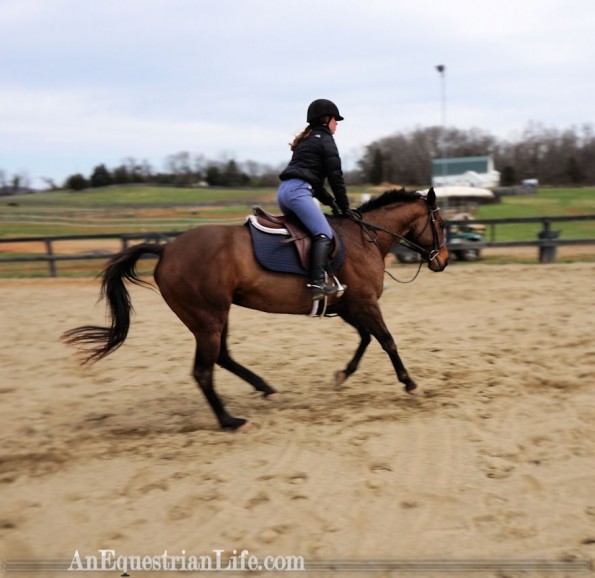 Overall, I do want to be the one riding my horse and have the ability to teach my horse what it needs to know, not just to be able to show Berry, but for any other horse that comes into my life. I want to be become a better horseman, and advance my own skills. But, that means accepting that I can’t innately know how to develop something in a horse without having done it, and getting assistance from someone who really knows what they are doing. Having ASR really is a blessing, and I hope I can learn from her.

Also, that girl is an insanely strong rider. She’s like an ant, tiny with the strength of something 10 times her size. I need to do whatever exercise she’s doing

So I will end this with a picture of me riding Berry, contemplating how in the end, what this all boils down to is I need to just ride more. That’s basically always the answer. 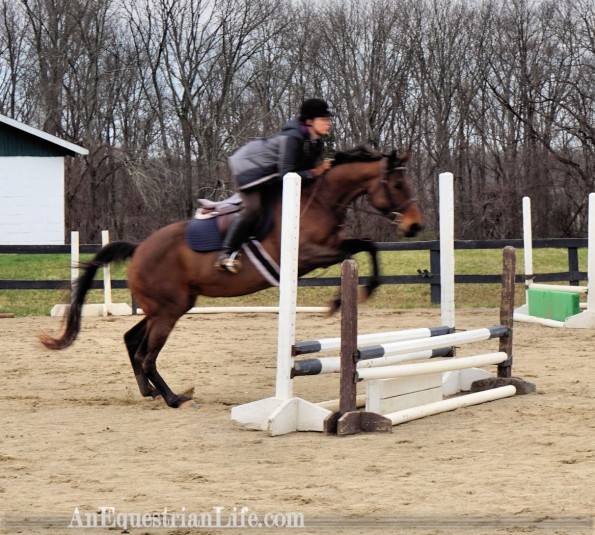 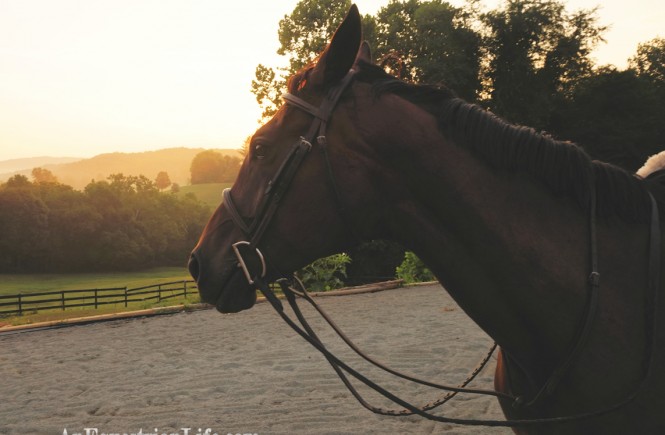 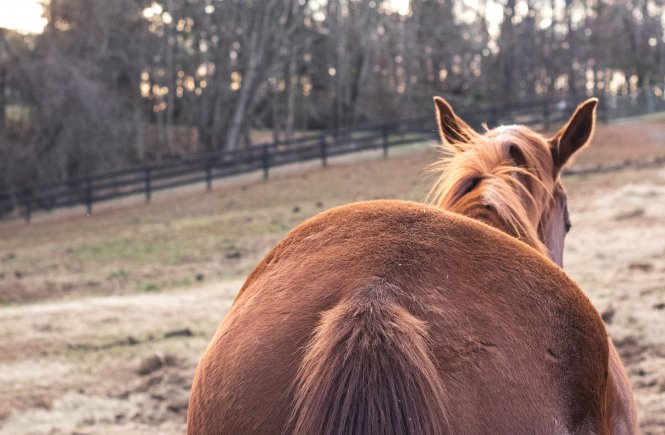