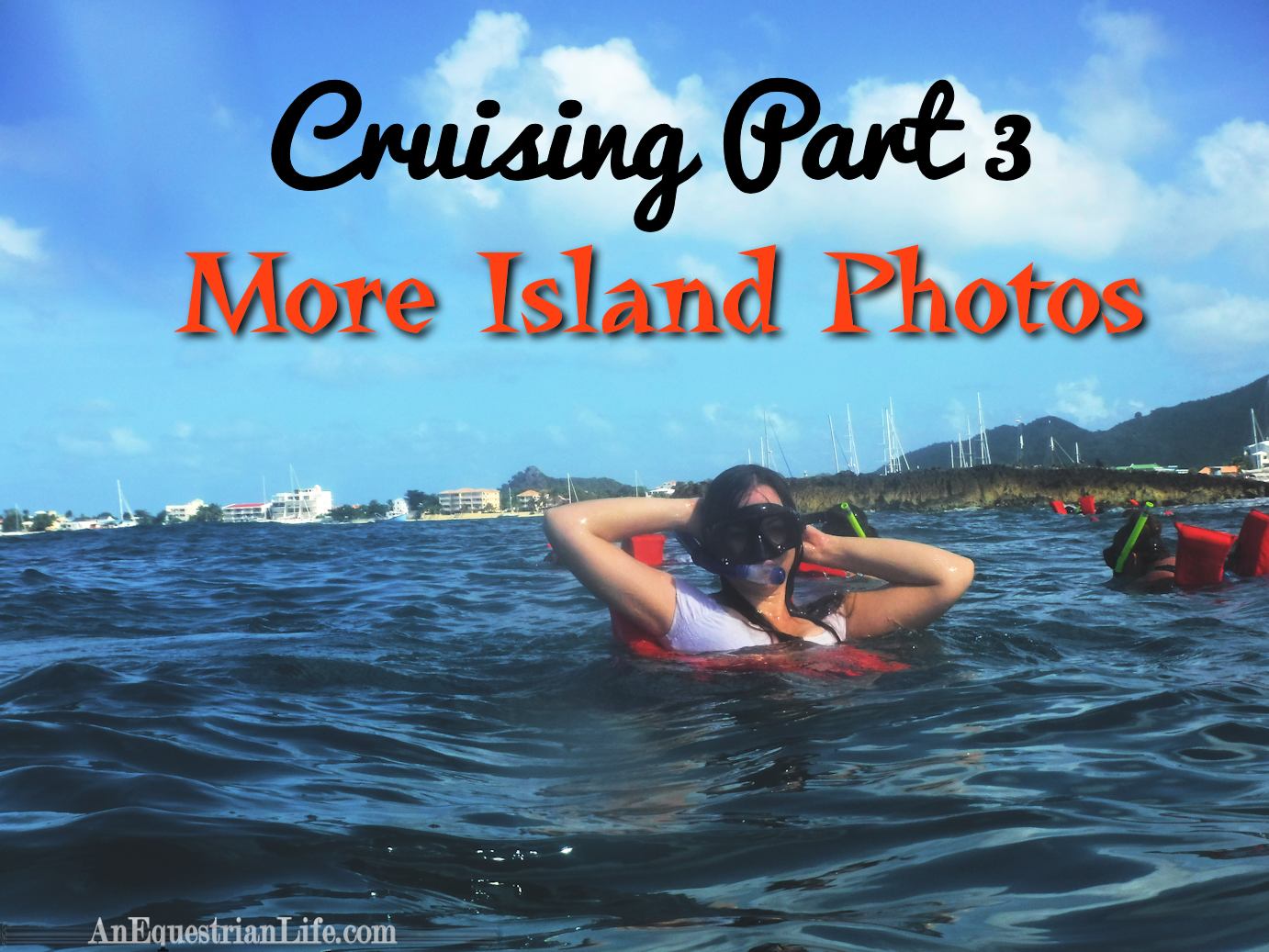 Because it’s hard to get people to come over and look at my scrapbooks, here it is in digital form to be forced upon you. 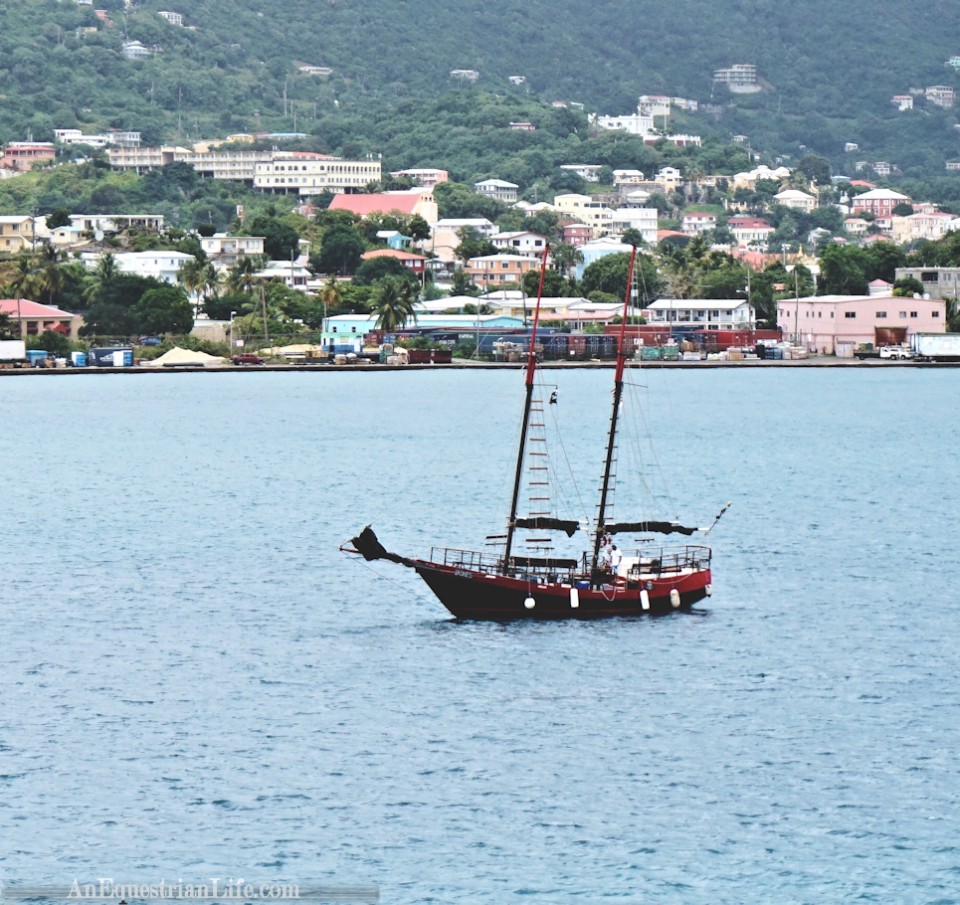 The Harbor at St. Thomas

This picks up from my earlier complaints about my cruise, and then my post on how amazing flamingos at the zoo are.

The next cruising stop was St. Thomas, in the American Virgin Islands. 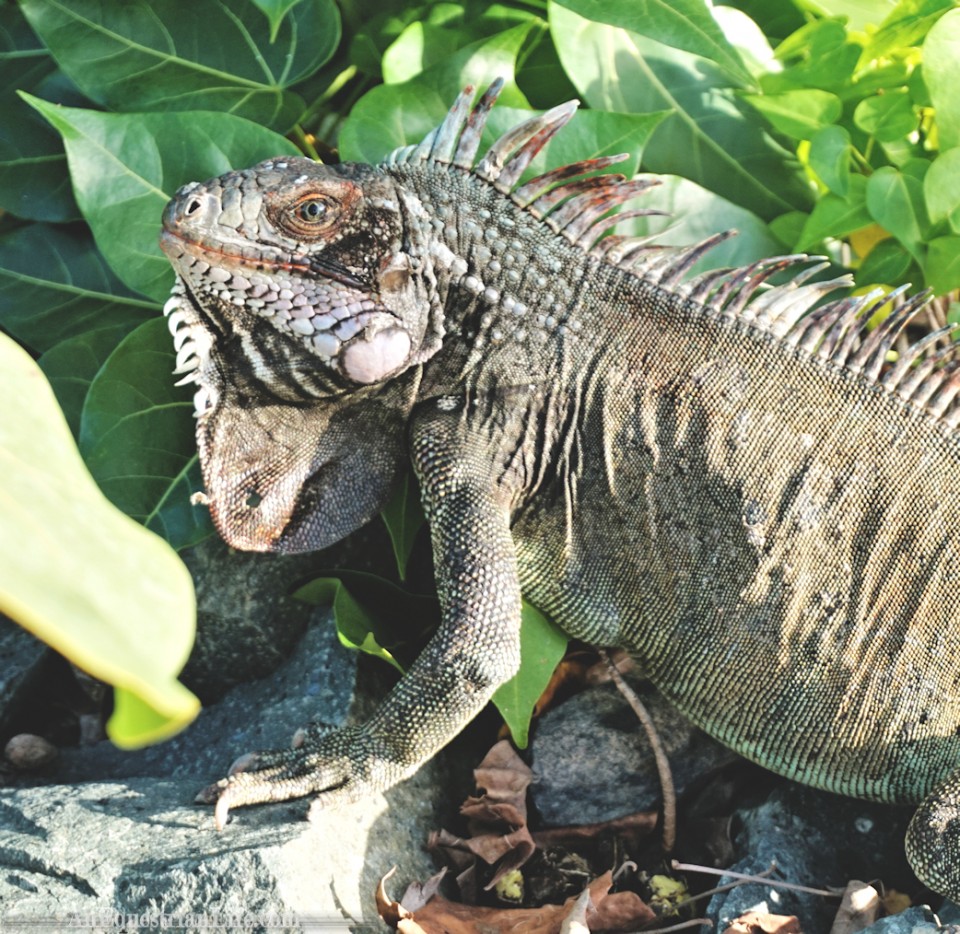 Lots of wild iguanas all around the port. My farrier says they taste like chicken.

Because I’m collecting National Park passport stamps, I had booked us an excursion to go to St. Johns, where the national park is. 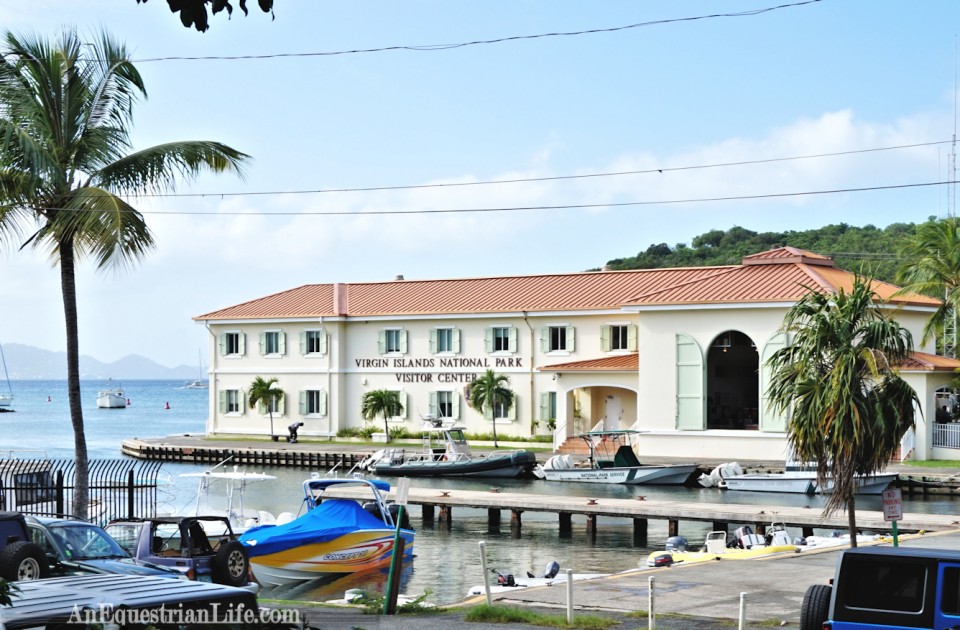 We disembarked the cruise ship, and immediately got on the ferry for a 40 minute boat ride over. Unfortunately, we picked the wrong side of the boat to sit on, so while the guide told us about different areas of the coast as we passed, we saw this: 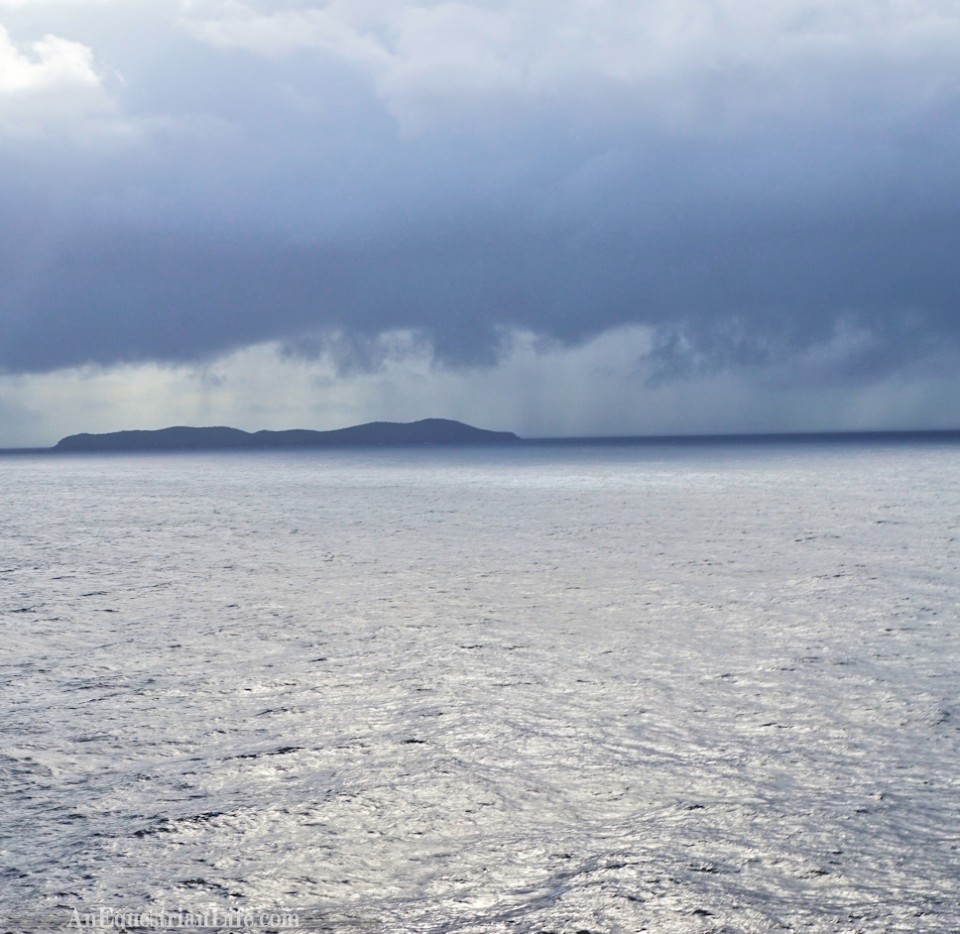 We passed the time by inventing names for the random islands we could barely see, like “No one wants to live there Island”, and “Do you think there’s a freshwater spring on that island Island?” We can not be trusted to come up with decent names for islands.

We passed over the exact spot where the Carribean Ocean becomes the Atlantic Ocean. The water became shallow and clear enough to see to the bottom. It was actually a very neat spot. Unfortunately, my pictures did not capture the brilliance of the spot, and they look exactly like every other ocean photo in existence, so they will not be included. 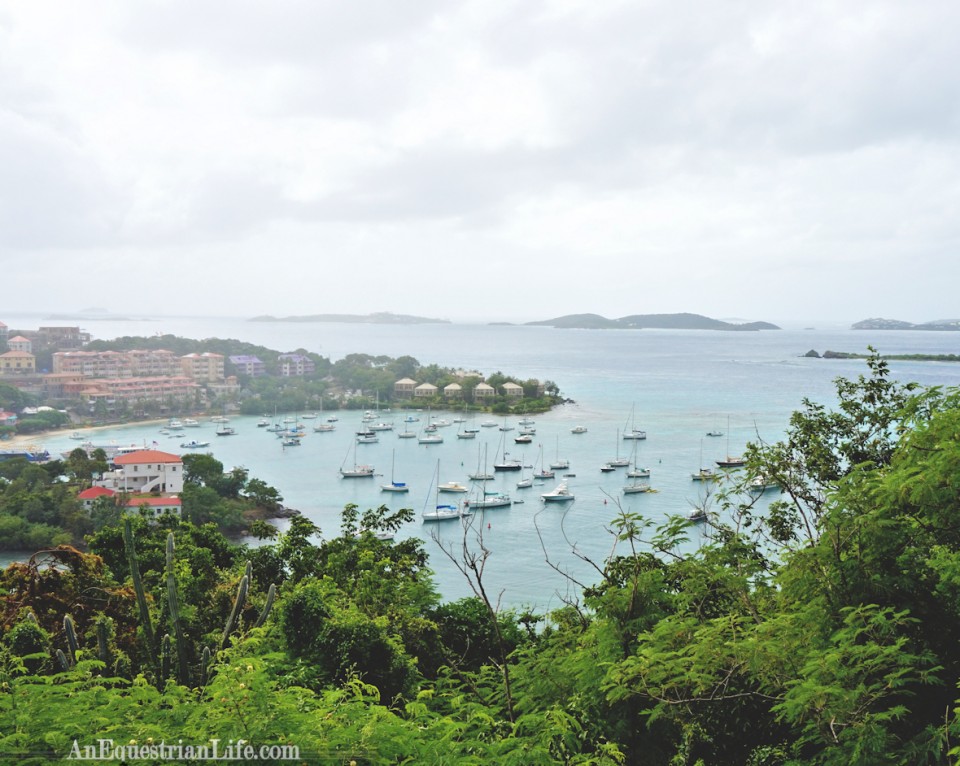 The harbor at St. Johns

The guide described St. Johns as the Beverly Hills of the AVI. The average price of a home is $1.4m. This crushed our fleeting dream of just staying on the island and never returning home.

Once we were docked, we unloaded for the next part of our tour – a guided bus tour of the island. This tour was a reinforcement of not having enough time in any of these places. It was just a tiny nibble of an island that contains so much more. I would have liked to have gone on the beach, hiked in the National Park, and explored the ruins, but nooooo, I have to be back on my boat. 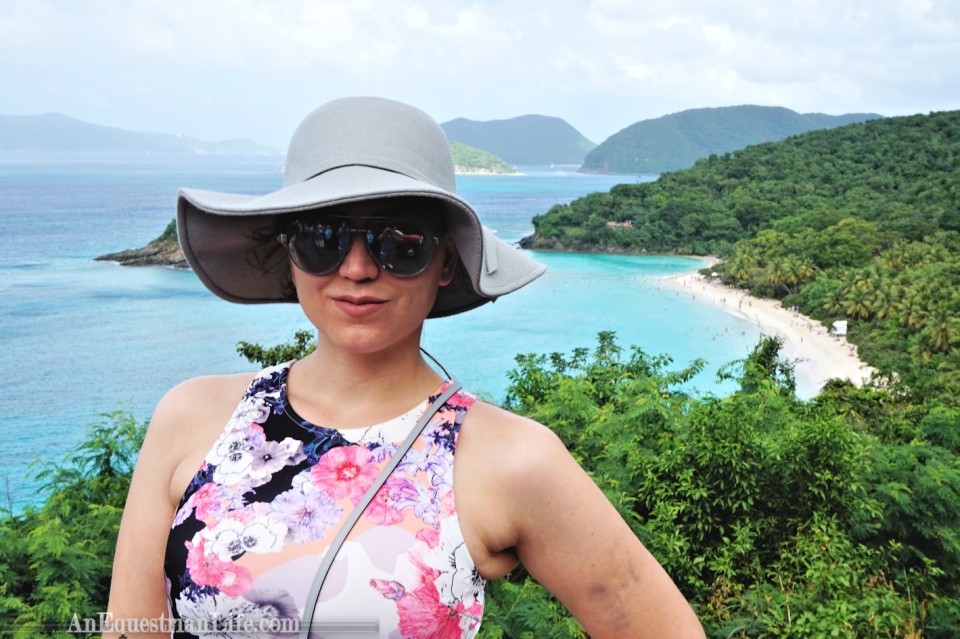 The beach that I can look at, but have no time to enjoy. What a tease. (also, not a bruise on my arm, there was paint or grease on the bus that rubbed off on me) 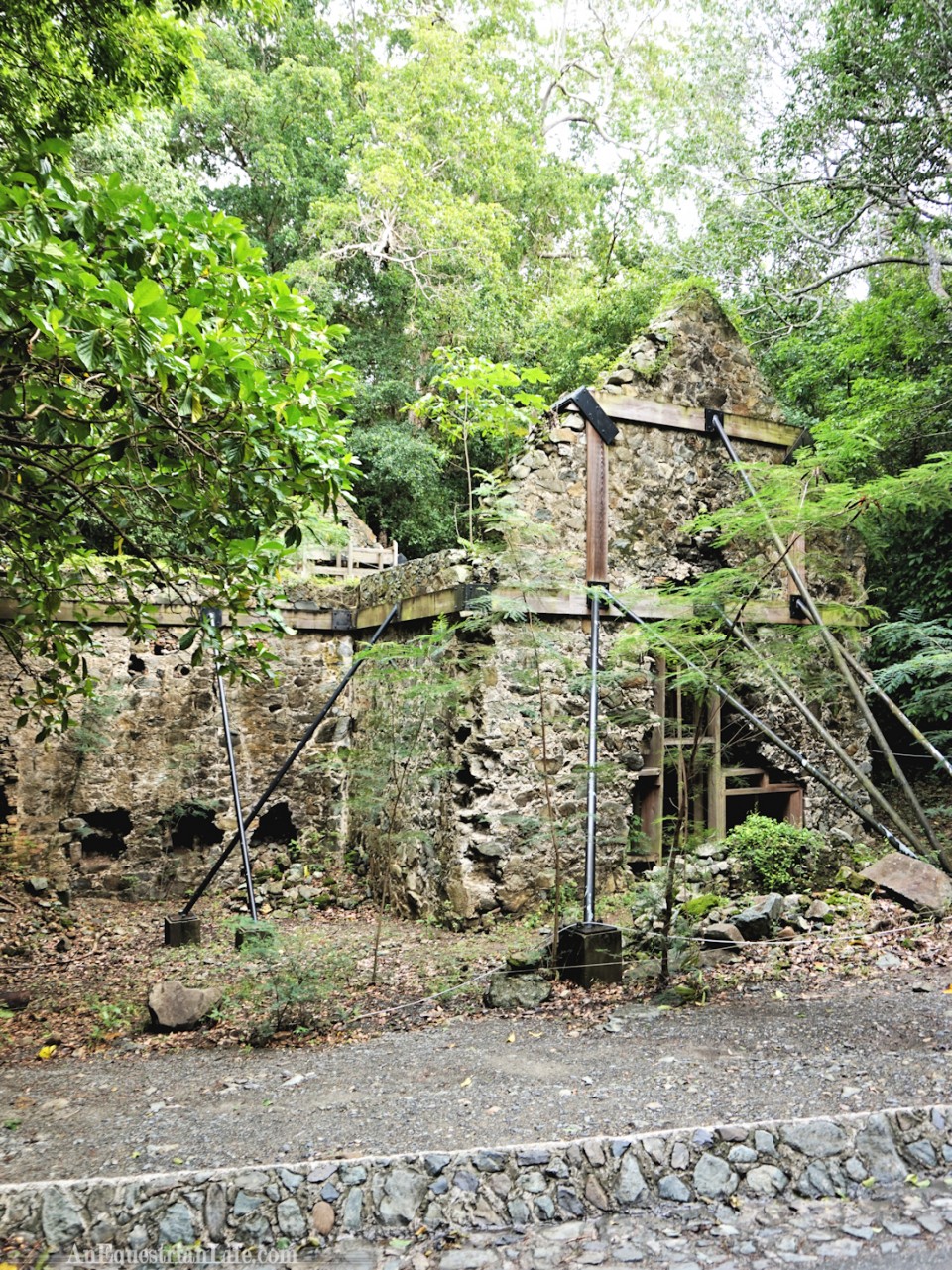 A mere glimpse of the ruins of the plantation.

We passed by the beaches, the vacation rentals, and a resort, and they all look exactly as beautiful, rustic and perfect as you’d expect an island that 80% national park to be. We were told there were wild donkeys, but I did not see any in person. Later on the ferry ride back to the dock, I befriended a woman from another cruise ship, and she showed me the pictures she took with a wild donkey. It looked highly annoyed by her presence, with a nasty, pinned eared expression, so maybe they aren’t too friendly. I did see free roaming cattle on the side of the road, though. Everything I saw of the island was tropical forest with no open land, so I guess their pasture is the shoulder of the roads.

Our tour ended, and we had a little bit of time to explore the harbor town. Naturally, I flocked towards the stray chickens that wander the streets. 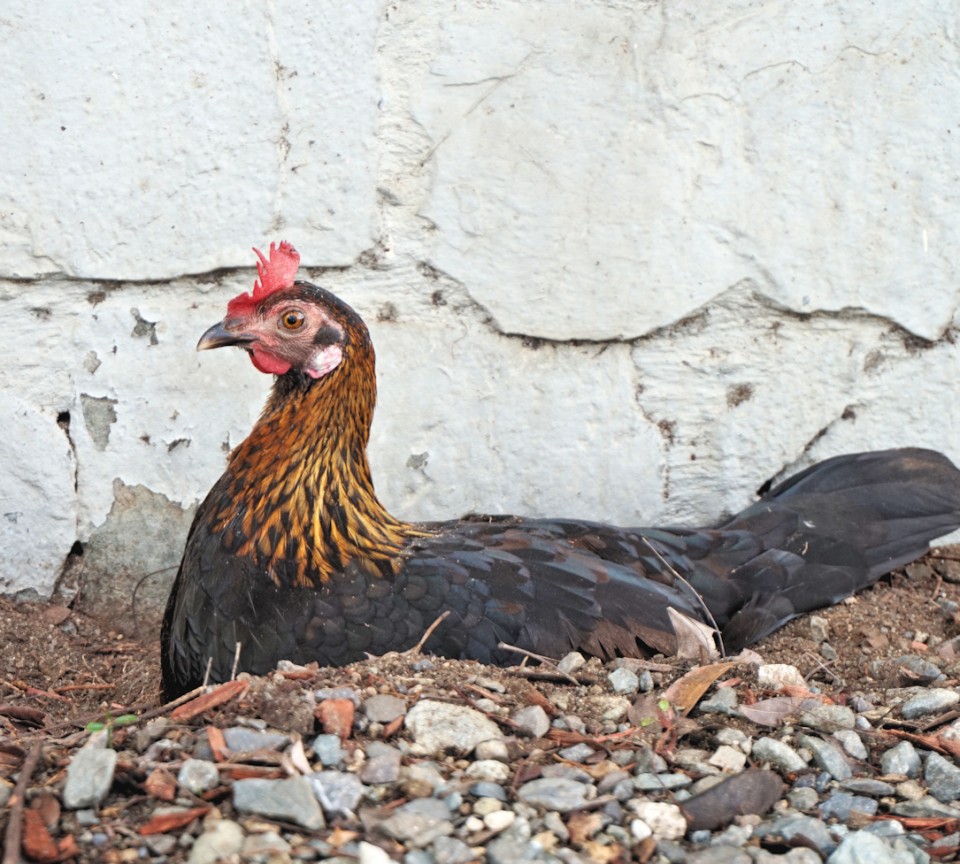 I dream of a world where chickens can cross the road without their motives being questioned.

As the chickens got sick of me following them, we moved on to one of the best parts of visiting a tropical island – sampling the local alcohol. First, we all got frozen drinks. The vendor was a tiny shop right on the street with a huge selection of flavors. She had a full menu of her creative offerings, but there was also the option to create your own. I could have been adventurous, but I know what I like – Miami Vice, which is pina colada mixed with strawberry daqurri. But, I did have her throw in pineapple, and that was a risk that paid off deliciously.

After finishing those, we decided to be adventurous and headed to a bar down the road. The sign was offering 16 oz drinks, and we thought that sounded like a good value. Unfortunately, that was a risk that did not pay off, as my brother-in-law and myself both ended up with horrible stomach pains from too much alchohol or sugar or both. Dave was oddly completely fine.

Luckily we managed to schedule our sickness far enough in advance of the ferry leaving that we were both fine moments before we left the dock. That would have been a horrible trip back otherwise. 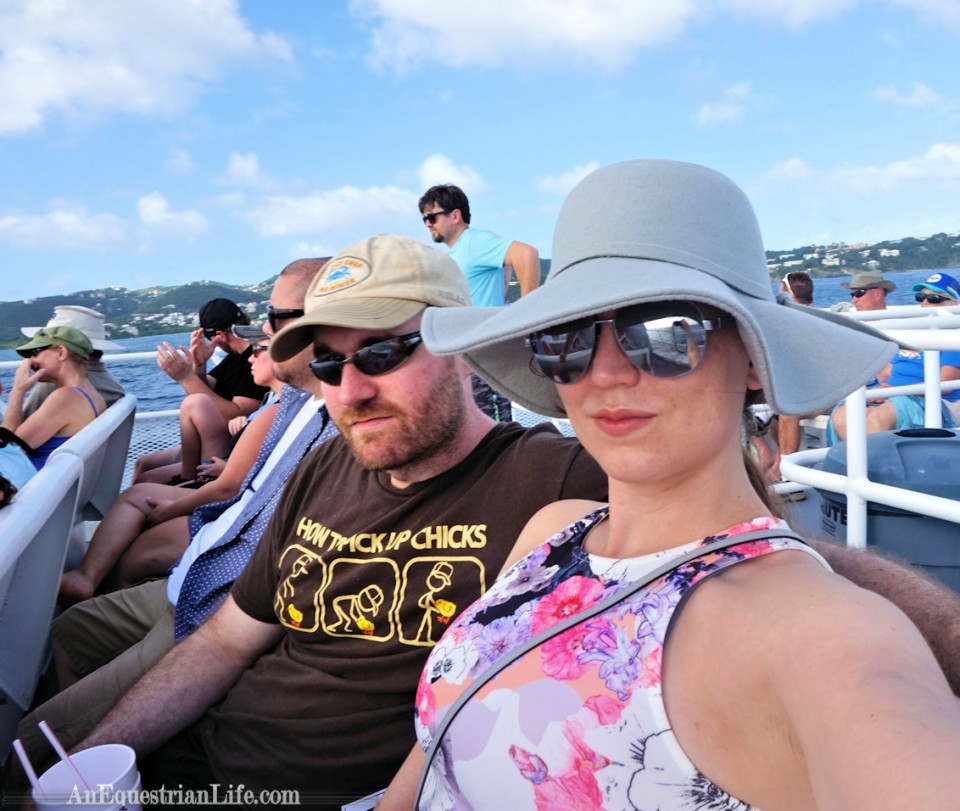 Feeling fine on the ride back!

We picked a way better spot on the return trip and were able to appreciate the tour. The guide, a California boy who wore no shoes, entertained us the entire ride. My favorite story was about when he had first moved here. He had been excited to learn that you can actually drink and drive at the same time. One day, he decided to drive down to the beach, so he ripped off his shirt, hopped in his car, popped open a beer and started driving. Not long after he started driving, a cop pulled him over. He protested when the officer walked up, saying it was legal to drink and drive. But, it turned out the officer had actually pulled him over because he wasn’t wearing a shirt. That was the illegal part. The cop held his beer while he signed the ticket, and then he held the cop’s beer while the cop signed it. 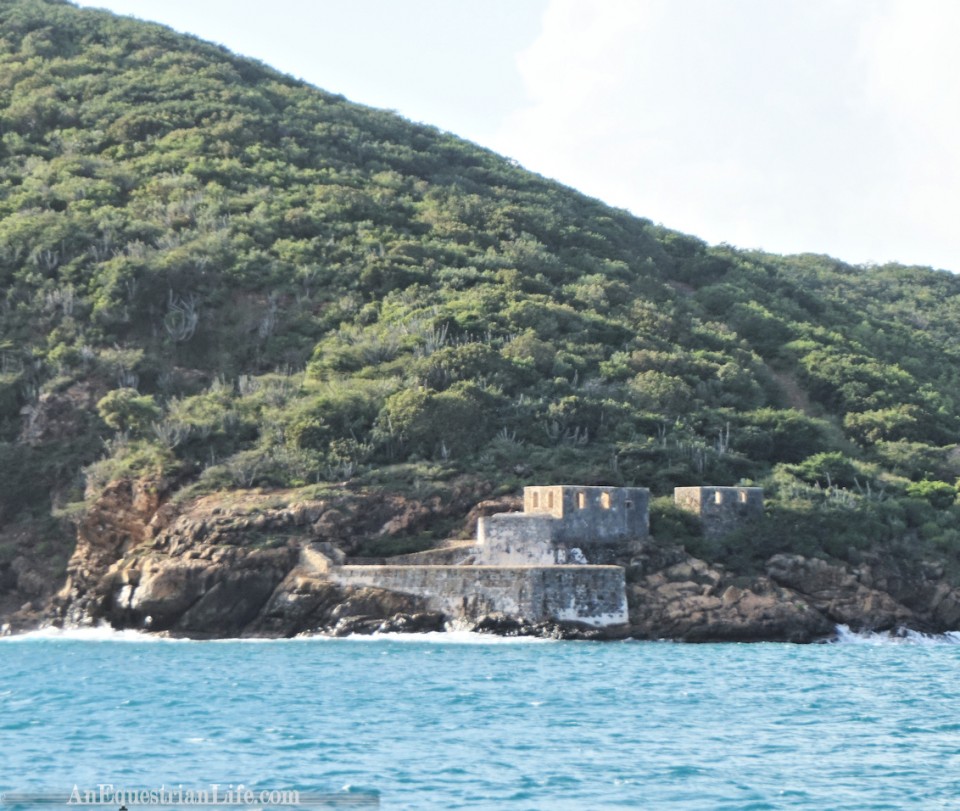 A fort at the entrance to a harbor. There was a chain connected from this fort to one on the other side of the entrance. If someone they don’t like tries to come into the harbor, they raise up the chain! Now, this fort collects water that the wild donkeys drink, and can be accessed by a hiking trail.

The very next day, we went on our last excursion – “Kayak and Snorkeling Adventure”. I’ve been snorkeling (I’m actually a certified scuba diver), but I’ve never been kayaking before. It was described as being “strenuous”, and that sounded perfect. I was craving a lot of activity!

I did not bring my camera on this trip because I assumed it would get either wet or sandy. Based on how I looked afterward, I would say that was a good decision to make. But, luckily my sister in law brought her underwater camera! An underwater camera is now a must have for all future water excursions. (Side note: I already have one… I just didn’t bring it on this trip. Foolish decision!) 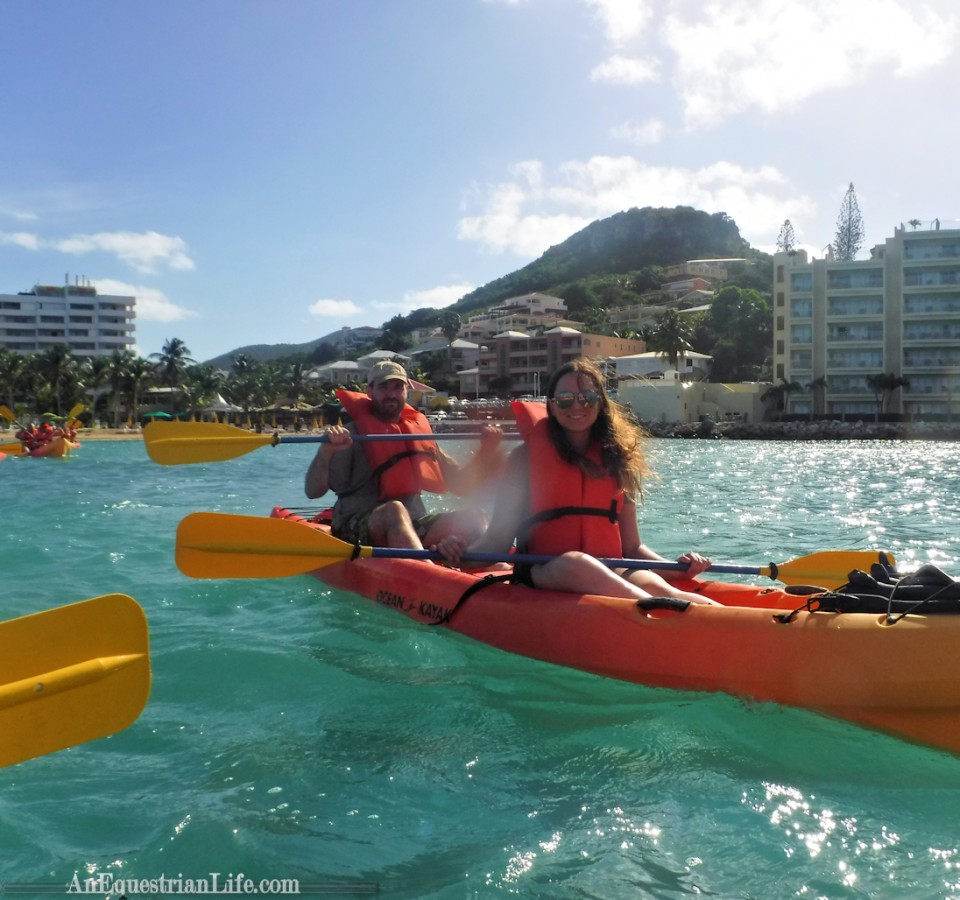 Setting out on our kayak adventure!

We now know that it is super hard to steer a two man kayak. I thought it would be like paddling in a canoe. This is not the case (then I guess we’d just be canoeing, and not kayaking!).  We smashed into lots of other kayaks as we tried to figure out this kayaking situation.

The sad part about this excursion turned out to be that we were literally only kayaking to the next beach over. It was a disappointedly short kayak adventure. 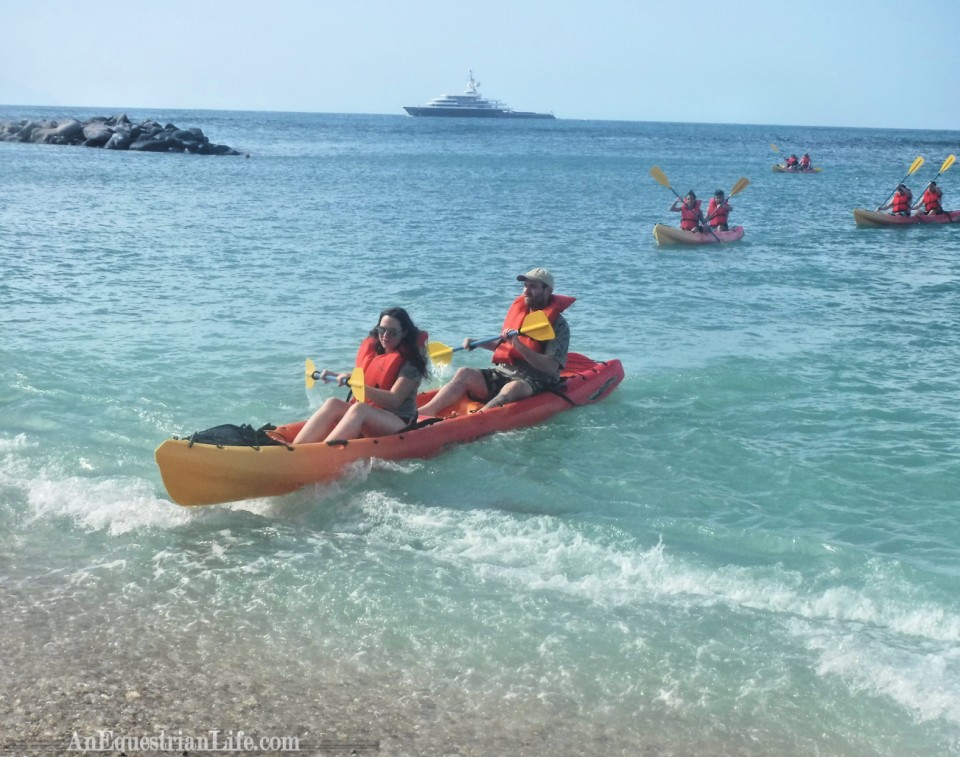 But, we did make it, so success!

We landed our boats and secured them, and then it was time to snorkel. Even though I love the water, I’m a huge baby about actually getting in the water, so I had a brief mental struggle before I finally went in. The sight of everyone else leaving the beach, swimming away and abandoning me, was great encouragement in getting moving. I waded in, cringing at the freezing water, but turned out I got used to it quickly, and it was very pleasant. 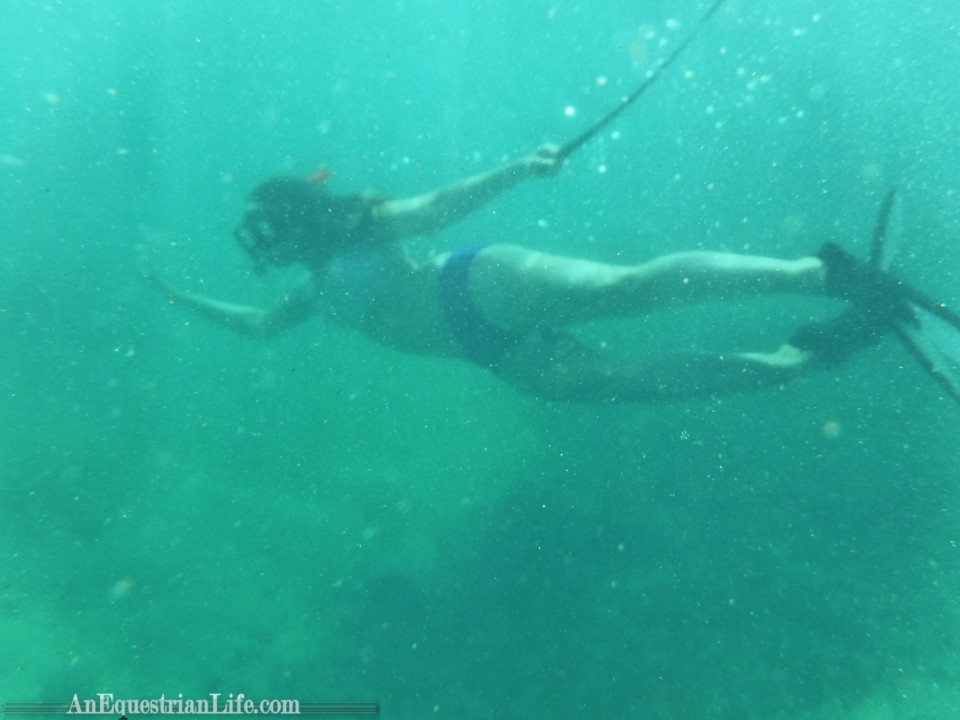 We were all given life preservers to hang on to. Being in the water is second nature to me (thanks, years of forced swim team!), so at first I thought they were treating us like a bunch of babies. I wanted to be offended, but having been around lots of people who claim they are expert riders after a single tourist trail ride, I see where they are coming from. But, the life preservers had a second reason: Lots of boats go by, and it helps us be seen by the boats, and therefore not be run over and mauled with propeller blades. I do enjoy living to see another day.

I was having sooooooo much fun. I can’t believe I have gone so long without going snorkeling. Our little group ended up being the last group still out in the reef, and that had it’s benefit. The guide who was snorkeling with us found me a sea urchin to hold. He set it on my hand and I could feel its little tentacle shifting around. After a minute or so, he told me to tip it off my hand back in the water. I tipped my hand over, and the sea urchin was stuck to my hand. It had suctioned on to me. We all had a laugh, and then the guide graciously peeled the little guy off me. I was afraid of damaging him.

The guide told us the light colored sea urchins are harmless, but the black ones had spines on them. Don’t touch them. 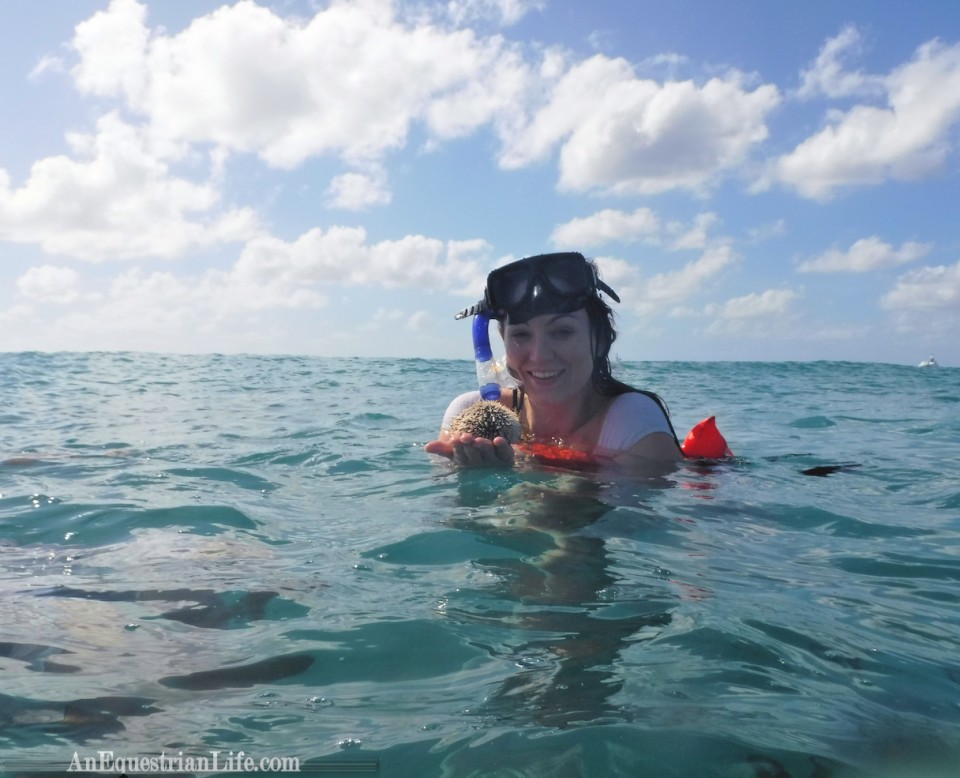 The sea urchin and me. Also, our snorkeling guide (he’s shy).

We headed back to the beach, and kayaked back. This time, Dave and I got the hang of it, and we shot through the water. If it was a race, we would have won. We were right behind the guide in getting back to our beach. We have decided that we both really like kayaking, and we’re going to find a way to keep doing it back in Virginia.

The excursion ended with a run drink. As all excursions in the Caribbean should! Then, it was back to being imprisoned on the boat for two whole days for the journey back to Ft. Lauderdale. It cemented in my mind that I really just want to spend time on the islands. Next time, I’m flying here straight here, and skipping the middle man. Instead of being stuck on the boat, I’m going to use all that time for hiking, kayaking, and snorkeling. And drinking rum. Obviously.