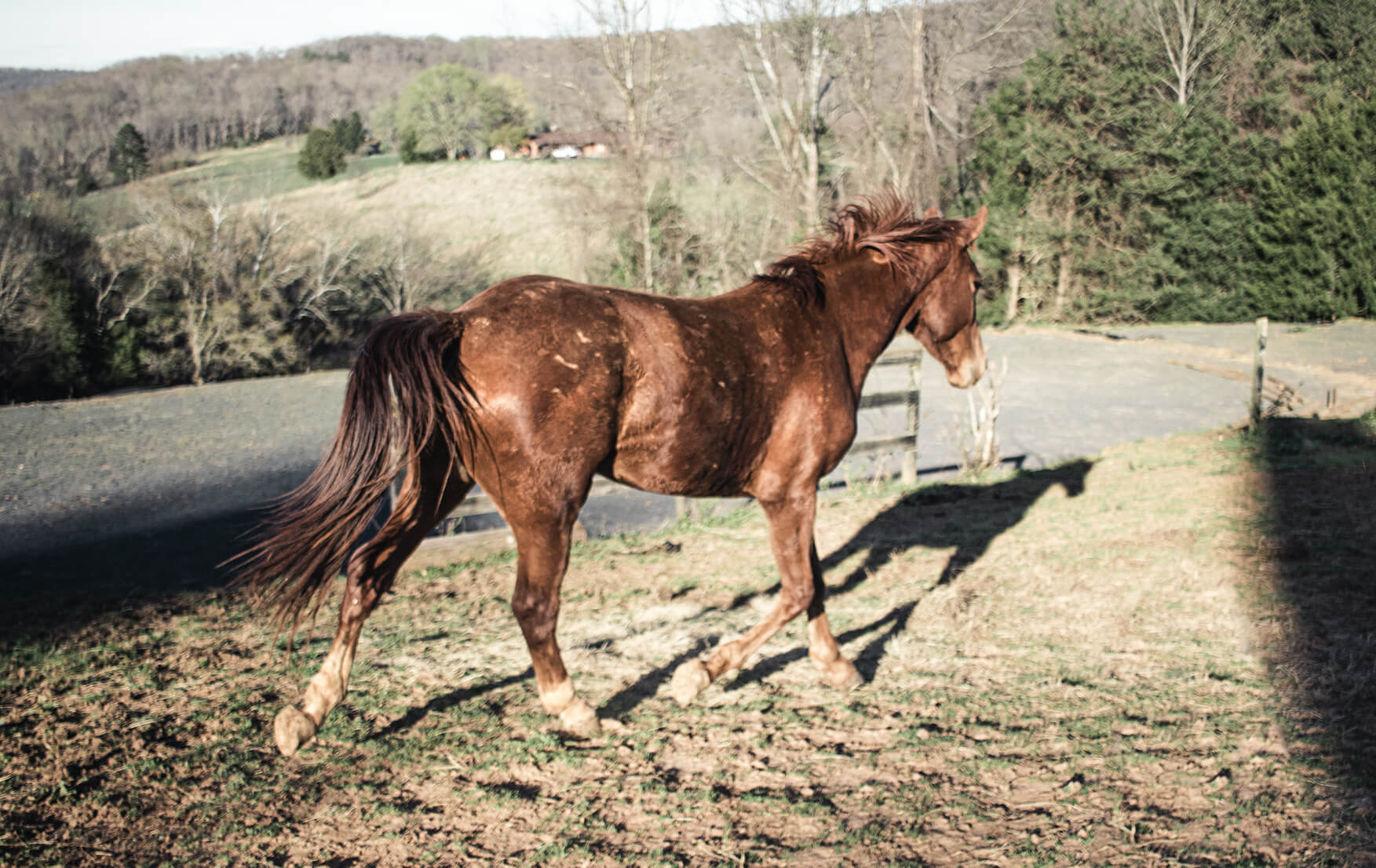 Several days after Stu’s last breakout, I was again mucking stalls. The stalls happen everyday, but this time was going to be different. (This blog is well on its way to just being a chronicle of Stu breaking my fences.)

You know the movie, “The Butterfly Effect,” where the tiniest thing can change how events unfold? That’s how this went. It started because I was bringing a bag of grain down to the barn. The bag was broken across the front somehow (possibly because Dave decided to use it to work out, which is now a thing he does), and there was grain spilling out of it. I had to move with care, as though it was a heavy baby who’s insides were slowly spilling out.

Because this was a very unusual sight, Stu, being the nosey punk he is, was interested, and followed me all the way to the barn. He was at a respectful 5 feet or so, because I’ve started screaming at him when he gets closer (Within 5 feet means playtime to him).

I went into the storage room, an awkward little lean-to that is attached the barn. It really needs to be removed, but I don’t have enough storage to make up for the loss yet. It is accessed directly from the field, meaning all the horses can walk right up to it. In the past, the three good ones would stick their adorable little heads in the doorway while I worked, as welcome companions.

(Now all my horses are adorable and perfect, with past transgressions forgotten, since I have experienced the living tornado that is Stu.)

Because I was carrying a sack of grain, I was not able to close the door behind me. Stu took that as an invitation to come on in. He has done this before, but last time he was yearling sized, and now he’s probably 16.2hh. I’m pretty sure his shoulders would hit the low roof. I didn’t want him in there with me, so I hustled to put down the grain, shoved him back out, and slammed the door.

Stu does not take rejection well. He decided to follow me a different way. Directly next to the door is the metal fencing I installed last year to make my barnyard. It did not have electric because it was just a stand alone segment of fence, with the door on one side, and the gate into the barnyard on the other. Of course, now, knowing what I know now, I would have just run the electric over the door, but once again, I made the mistake of thinking it was fine the way it was.

Stu decide to smash right through the metal fence, ripping the nails holding it in place right out of the barn.

I heard the metal clanging, but I figured he was just being a weirdo, and started cleaning the stalls. A few minutes later though, I saw him through the window, grazing in the barnyard.

After my first feelings of annoyance, I decided just to let him be. The barnyard is enclosed, there was no where for him to go, and if I put him out in the field, he’d probably just break right back through the fence anyway. Once he discovered a weakness, electric fence would be the only thing that would keep him out.

The other horses, much more polite and rule abiding, glared at him from behind the fence.

Then he wandered over to the back gate that leads to the hay storage – and his former paddock full of lush grass.

The gate I have is not big enough for the opening. The opening is a weird size, inherited from the previous field dimensions, which had another fencing segment that rotted away. I didn’t replace the rotted fence because the path needs to stay wide for the hay truck to get through. I hadn’t worked out what could temporarily fill the space, and be easily moved for deliveries. Two gates would be overkill, the space is probably only 4 feet. (Although now I see a smaller gate placed there in my future…)

As a temporary measure, I stuck my spare water trough there, on it’s side, meant as a deterrent to horses for going into the hay area. They don’t have unlimited access to the area, and only go into the barnyard to head to their own stalls. For turnout, I now lead them from their stalls to the pasture to avoid wandering (and weird bursts of explosive energy). It seemed fine for the few seconds it takes them to travel from their field to their stalls unaccompanied.

Putting it there was a lazy solution to the problem, but it seemed to work. Plus, it makes a handy bench. It has been there for a while now, and (famous last words) never been a problem before.

Stu decided to prove it was only a visual barrier. He walked up to it, examined for a moment, and then lifted his front leg up really high, and stepped over it. The other front leg was over in a flash, and then he paused. I hurried to open the gate, as I was sure that he wouldn’t be able to get his back legs over, and would somehow hurt himself. Well, even thought I had the gate open to easily get off the trough, he pulled the hind legs over with a little hop, and didn’t hurt himself. He casually walked to the grass and started eating.

He’s not doing any of this to be bad. There is no evil or meanness in him. He stood quietly while I caught him, even after accidentally poking him twice in the eye. He’s just exploring the world, and sees barriers as a puzzle to be figured out.

I turned him back out with the other horses, and hurriedly put up electric fencing before he made another attempt. He was thinking about it, and started pushing up against the wire fence, but I yelled at him and he stopped.

I have never had a horse quite like him. To put a positive spin on this frustration, he’s the most curious, boldest, and outgoing horse I’ve ever met. He could be a very cool horse once he’s trained.

Part of me wants to laugh, and part of me, really the majority of me, is wishing that he’d just please be a normal horse, and do normal horse things, like grazing and staying in his field. I now worry every night that he’s going to break out of his stall, hurt himself, and destroy the barn. I am hoping he’ll be easier to contain and manage once he matures. Hoping is putting it too lightly… I am desperate for him to be more manageable.

On the plus side, he does keep playing with his hanging ball. It’s pretty cute, I need to get a video of it. Too bad it did not work to divert his playfulness in a more constructive way.

To end this on a further bizarre note, last night I put them all up for the night, and then did some chores. I came back to the barn to put away my tools and there was a raccoon in Stu’s stall, less than three feet from him, eating his spilled grain while he munched hay. It looked like a cat at first, and then it scurried away out the back door, and I saw the ringed tail.