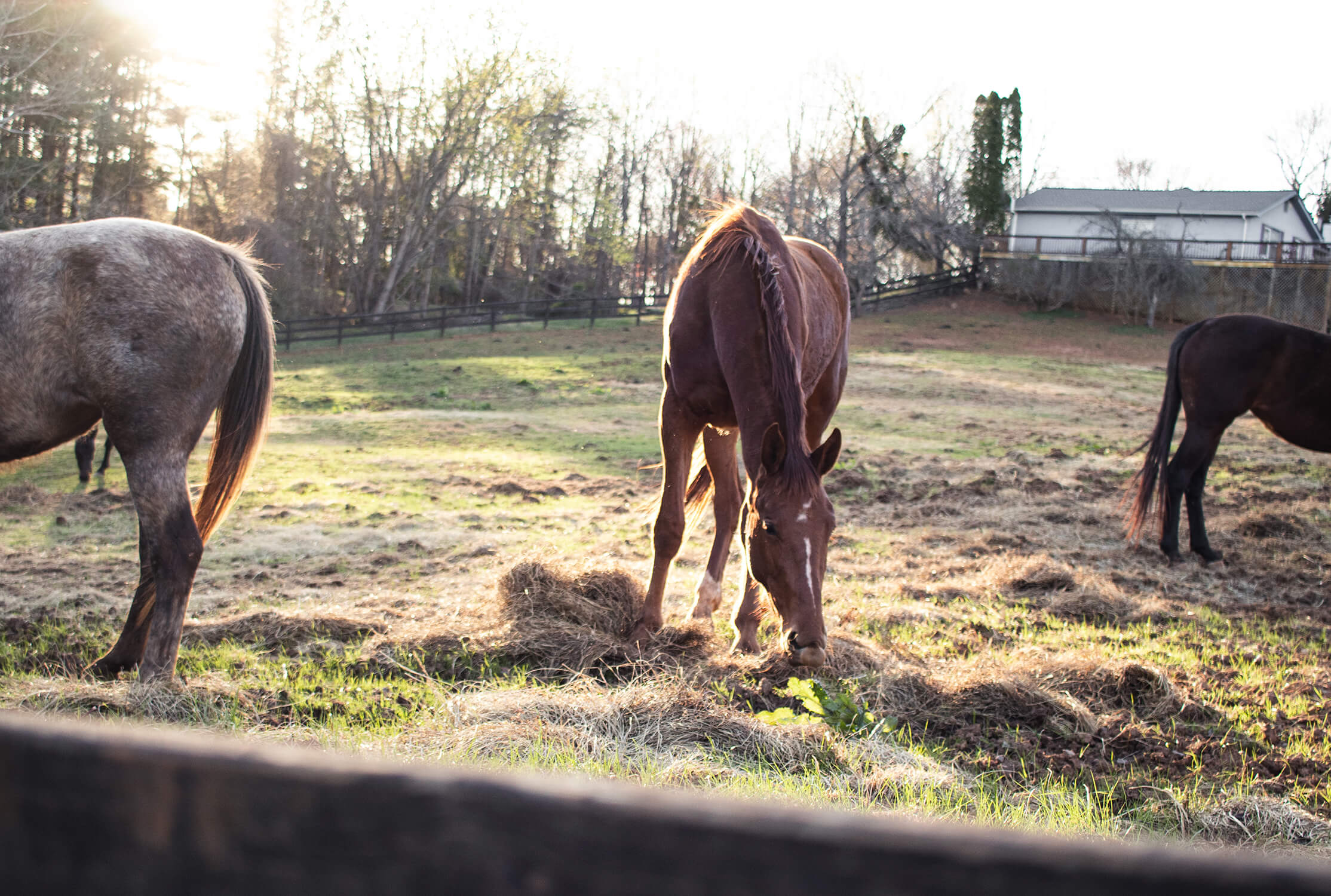 It was late afternoon, and I was walking into my kitchen after hanging out with baby. My tiny yorkie wanted to go outside, so I let her out, and turned to grab some food before I went back to baby. My eye caught something out of place, and I paused, looking out the window.

Stu was grazing in my backyard, totally nonchalant, as if that was a totally normal and casual thing to be doing.

My first thought was for my tiny dog. I never let my dogs mingle with the horses. They are small yorkies, think they are bigger than they are, and they could easily be crushed. I’m accidentally stepping on them all the time, and I’m actually concerned for their well being.

In a panic, I threw open the door and screamed for the dog, forgetting all common sense. This scared Stu, who jumped out of his skin, all four legs flying out in a scramble. I hadn’t wanted to scare him; it would make him harder to catch, but it was a little late for that now.

Luckily the dog came quickly, and I ushered her back in the house. Then I had to go tell Dave that yet again, the horse broke down fencing and went over it.

I’ve started keeping a lead line in my garage because this happens so often. It’s easier to grab than going all the way out to the barn and then backtracking to the scene of the crime,

Despite the scare, Stu was caught easily. Didn’t even move or try to get away. He was perfectly at ease with both being caught, and hanging out in my backyard.

The other horses had not figured out how he got back there. (Honestly, I couldn’t figure it out at first either). When it was just the three of them, I used to let them graze back there all the time (it’s easier than mowing the grass) so I know they were annoyed that he got back there and they could not. I had to swat them back to get Stu through the gate into the pasture. He went right back in, just happy to be the center of attention.

Then I had to figure out:

How Did Stu Get into My Backyard?

My backyard runs right up against the pasture. It’s shaped a bit like a long skinny triangle, and the whole thing is fenced in with three board, and then reinforced with mesh square fencing, as that was the requirement when we got our rescue grayhound many years ago. After she died, we just left the fencing.

It seemed like sturdy fencing to keep a horse in or out. However it was not sturdy enough to support the huge branch that fell on it, crushing the boards down.

The incident was near the point of the long skinny triangle, not an area I go to frequently (basically, never). It was also hidden slightly behind a tree, so while I could see from a distance something had happened, it did not appear to be anything terrible. So while I knew it needed to be fixed, I was procrastinating because I would have had to pull out the chainsaw. The branch had fallen, but it mirrored the fence itself, so it seemed like instead of regular three board, I now had two boards and a big branch.

Stu, however, saw an opportunity. Since it was over the course of a few days, he must have observed it, and run some tests. He investigated, somehow pulled enough of the branch off the fence to create an opening at the top, and then jumped the fence. It was a pretty small opening, right up against the tree that supplied the branch, with a mess of crushed three board and mesh wire fence crushed in there, but he managed it.

I fixed the fencing, and ran more electric wire, including across the gate into my backyard. Now I have to duck to get into the pasture, but I’m not taking any chances. I hadn’t thought I would need it to keep them out of my backyard, but I should have known. Stu finds weakness and exploits it.

In an effort to help his boredom, I hung one of those horse balls to a tree. I don’t think I’ve ever actually seen a horse play with one of them, but I figured since someone manufactures them, there must be enough horses that play with them to make a profit.

D’Arcy had bought one for her horse Ollie a long time ago, and somehow it ended up in the wood by the baby horse paddock. Then Ollie moved out without it. I’m 80% sure that Stu tossed it there, but that is only based on a hunch, since I never saw it happen.

The first day the horses ignored it. The second day, I was fortunate to be out there, mucking stalls, when Berry suddenly seemed to realize it was there. She stood like a statue, staring at it. Vintage and Pony both ignored this, but Stu saw Berry, and decided to stare at it, too.

Berry approached. She started poking at it with her nose. She lipped it. Pushed it around a little. Then she lost interest and moved on.

Stu approached it. He poked it. He lipped it, and then he started biting it and flinging it. He tossed it up the air and let it hit him in the side. He’d pause, and then turn it bite it.

He played with it for nearly 20 minutes, up until the stalls were ready and I dumped feed. He played so vigorously I thought the branch was going to break. Before that happens I will need to pull out a ladder and put it on a stronger branch.

I’m really hoping the ball satisfies his need for play. He’s driving me and the horses crazy with his shenanigans. Never owned a horse quite like him before.