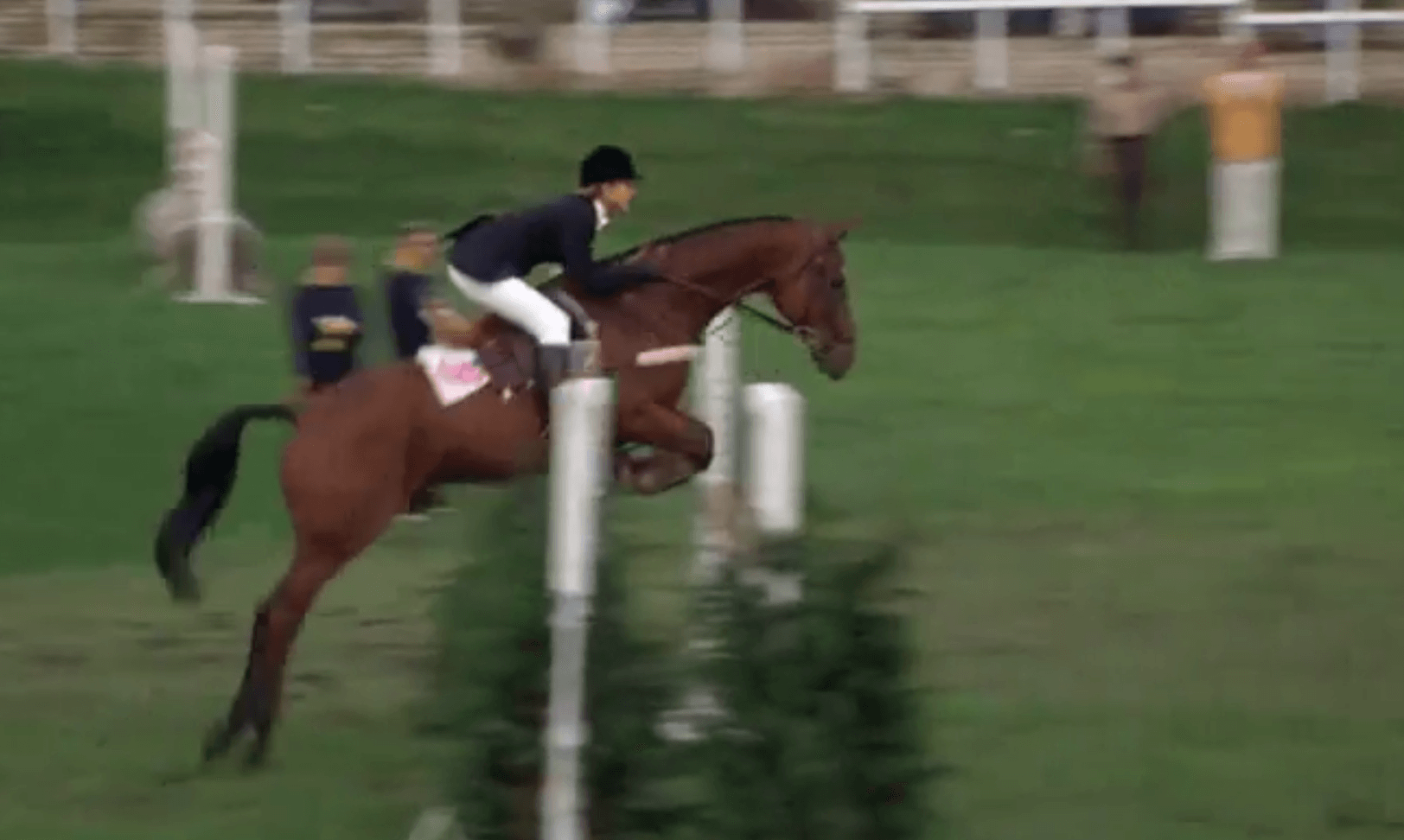 International Velvet is the sequel to National Velvet, an adorable old film about a girl who races her horse in the Grand National. I loved National Velvet – part of that is nostalgia to watching it as a kid, and part of it is that it’s just a good movie! After recently re-watching National Velvet for the above post, I decided it was time to watch the sequel.

Well, I have mixed feelings on this movie. I want to say it’s good because I liked it’s predecessor, but seems like the grandfather of all the weird horse movies that now exist. Modern filmmakers watched this movie and instead of looking at the great horse content, they looked at the bizarre content and said, “Yes, that is what makes a horse movie. We need more of that.”

Too Much Weird Voiceover

Velvet likes to narrate the story in a breathy voice while dramatic scenery is shown. Velvet also likes the sound of her own voice – some of these narrations are mini speeches. They are also unnecessary. I’m pretty sure all of her narration could have been cut without changing the rest of the movie.

When Velvet is unavailable for narration, someone else steps in to narrate. Really there’s just too much narration going on.

The whole movie exists because Donald and his wife are killed in a car crash. Sarah, their daughter, is sent to England to live with Velvet and her lover (they aren’t married, but they live together, and I’ve always wanted to use that word in that context. I might throw it into a few more things.)

So Donald, the adorable little kid from the first movie, is dead. Despite this starting the movie, I feel like it’s almost glossed over. There should have been way more mourning for that cute little guy. But nooooo, instead everyone gets on with their lives. Unbelievable.

The Pie is a Totally Different Horse

I don’t mean in the sense that it’s a different horse actor. Obviously they’d have to find a different horse, as the last one would most certainly be dead by the time this movie was filmed.

I mean that this horse is a bay, with no markings, and The Pie was a chestnut with a huge honking blaze. They look nothing alike. How hard would it have been to at least get a chestnut? Or even just a horse with some white on its face? Surely that dark bay was not the only horse in existence in England that could play this role. They didn’t even need a talented horse – he’s ridden one time, but he mostly just stands around. He’s not required to perform any stunts.

And that’s before pointing out that The Pie was most definitely a gelding in the first movie, and then somehow regrew his boy bits for this one. But, this is clearly for the plot point as Sarah acquires one of The Pie’s foals. Having reproduced the correct amount of times, The Pie quietly vanishes from the story.

Sarah Lives in a Rough Neighborhood

After Sarah gets the horse, “Arizona Pie,” the movie fast forwards a bit. Arizona is trained, and Sarah is riding constantly.

Sarah apparently got the reputation as the weird horse girl at school. There are some boys that either hate her or have a crush on her. They see Sarah riding one day and whistle at her. She ignores them, and it sends them into a rage. This starts one of the most bizarre scenes in a horse movie I have ever seen, and probably the inspiration for all modern horse movies.

They chase her with their car (looks like a little fiat, so it’s basically a clown car, stuffed with teenagers), even following her into a field. Everyone does donuts in the field until Sarah decides to jump a gate to escape. She’s understandably stressed out though, so she loses her balance and falls.

Meanwhile, the boys have little time to celebrate their victory. Their car hits the edge of an obstacle, and flips. There’s a moment’s pause, and then the car blows up. No doubt one of the hazards of owning a fiat.

It’s revealed in the next scene that all the boys died. I think the movie implies Sarah feels responsible, but really, the boys chased her maliciously in a car, trying to hit her. I’m not sure how she’s supposed to feel bad about that.

It doesn’t really come up again, so I’m not sure why it was important to include at all. Maybe the producer just wanted to blow up a fiat.

Sarah is not shown taking any lessons before she decides to audition for the British Olympic training. The coach even asks her where she trained and she replies, “Arizona,” so it certainly sounds like she hasn’t had any training since coming to England.

It’s just a movie so I’m not going to nitpick, I’m just going to leave it at, wow, what natural talent.

Her audition goes well and she is accepted into training. She has a really well known, Big Name Trainer.

Captain Johnson is apparently very tough, and everyone seems to excel under his training. Well, the movie implies this, but I’m confused that he has to explain dressage to them. They are supposed to be training for the British team – shouldn’t they know this??

I thought the exploding scene would be enough bizarre violence, but apparently not. The British team is flying to their first competition and one of the horses freaks out on the plane. They try to tranquilize it but it’s too late for that. With the horse bursting out of his box in the small plane compartment, they only have one option – they have to put the horse down.

Luckily it doesn’t show the gory part, but the implication is enough. Yuck.

This is where the fun starts. Basically just footage of horses running cross country and jumping. It’s glorious.

The British team goes to two competitions. The first one, where the horse got shot en route, Sarah does not ride. The man who lost his horse instead rides Arizona. It’s actually kind of a nice way to get your horse international competition experience without risking your own neck. Since she’s only a little sad and not really upset, maybe she also sees it that way.

In the second competition, the Olympics, Sarah does ride. She actually falls off cross country, dislocates her shoulder, but gets back on and finishes the course before collapsing after weigh-in. What a trooper.

It really is fun to watch all the horses, though. Kind of like watching actual competition footage… because it actually was! The footage is from the 1977 Ledyard Farm Horse Trials.

I really have no complaints about the end of the film. It has a predictable ending, but I don’t even mind now that they’ve sweetened up the movie with all those horses.

Overall, it is worth a watch for horse lovers – as long as you like random, abrupt, brief violence. Think of it as an art piece – if you don’t understand the subtle nuances and undertones of a fiat exploding, you just aren’t cultured enough. It’s clearly a warning of what will happen to those that oppose us horse girls.  Distribute this movie to all our enemies.