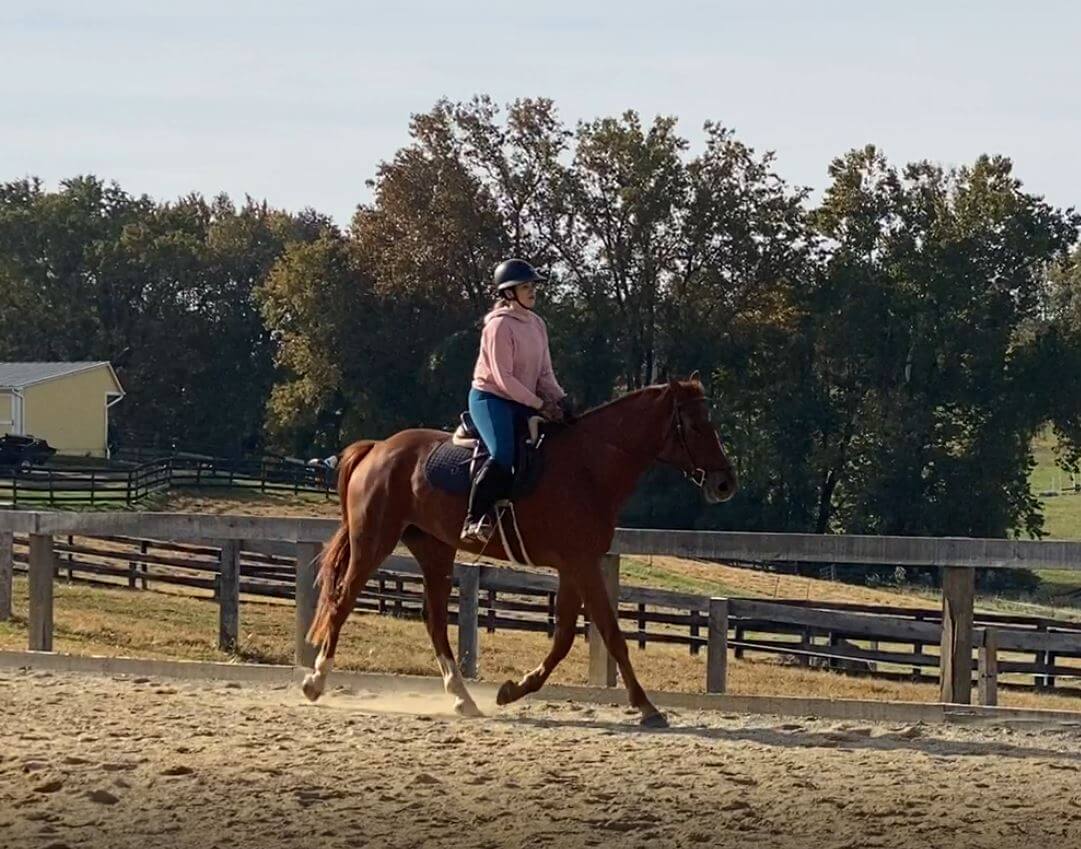 I am now riding my own horse, a truly incredible feat. After a bit of a rocky start, he’s smoothed out and doing much better. My trainer did do lots of groundwork and rides in the last two weeks to get him to this point, but I was not present for most of it. I think it’s better that I didn’t see that part, as it left me with a bit of blank slate to form my own opinions about him. If I had seen him being bad, it might have made me nervous about what he was capable of doing.

My trainer said that Stu was ready for me, so it was time. She said she’d give me a lesson him to get me comfortable.

As it turned out, the hardest part of the ride was finding childcare so I could go take the lesson. I hadn’t found any kind of routine that worked yet, so I was trying to figure out what I could do with three small children so I wouldn’t be distracted during the lesson. I’ve discovered that almost no one is willing to watch twin babies. I get it, if I wasn’t the one who had them, I would be reluctant to take it on, too. The one time we did hire a babysitter went poorly, as she couldn’t handle everyone at once.

In the end, my husband took time off work to watch them. I don’t think this is something I can do on a regular basis. But that’s a problem for next time.

On to the ride!

I arrived feeling nervous. It was only my second ride since I had the boys, and I hadn’t been riding regularly before that, being pregnant and all. Plus, this was the horse that I had such high expectations for, that I’d wanted for so long. My dream horse that I sacrificed so much for, and now we were going to start our journey together. We’re basically strangers at this point, we are starting from scratch.

I was given instructions to go get Stu with a rope halter and a whip and I couldn’t help but wonder why I am being trusted with this important task. Didn’t she know what a coward I am? Didn’t she know I cannot do this on my own?

I’d be lying if I said that I didn’t want to just cancel and push off this whole thing for later.

But, I went and got him, no incident (except being slow as glue, which is why I had the whip.)

I tacked him up, no incident. (Except I discovered my saddle does not fit him, and he has a weird shaped back, and I’m probably going to have get a custom saddle. Another expense I didn’t need.)

I walked out to the ring, no incident. (no further comment, but the other points had these, so I’m putting one here.)

Amanda demonstrated how she’d been lunging him, and then handed him off to me to lunge. It went very smooth, and he listened very well.

Then, I got on, the moment I’d been both dreading, and waiting for with full enthusiasm.

And… it went fine. He was awesome. He did what I asked. He was just a horse, not a crazy beast, not an untouchable mythological creature.

I’d been hyping him up, and worrying about him so much, I forgot that in the end, he’s just a horse. I know (mostly) how to ride a horse. I know horses. And he was one of them.

My worries faded away. I started out tense and nervous, but was relaxed at the end. It was an amazing ride. It was very simple, walk, trot, canter, and make sure he steers. Felt a bit like test driving a used car, checking to make sure all the parts work the way they should.

My own parts felt stiff and uncomfortable, though. My leg felt like a 2×4 with no bend or grip, and my back hurt from having to sit up straight. It might be time to start up yoga.

After the lesson, I was free to take on my own horse. I don’t know how I’m going to fit in lessons yet due to scheduling, so I’m sort of on my own.

I did come up with a childcare plan though! My plan is to ride during the boys’ nap, and take Bridgette with me. I’m going to watch her while I ride. This only gives me approximately 1 hour and 15 minutes at the barn, and I have to multitask while there. Yes, this did seem like a bad plan to me, but the only way to test it was to just do it.

I retrieved Stu from his field, incredibly grateful that he really likes hanging out in his shed, as it’s very close to the barn. Bridgette hung out with me for a bit, and then strangely disappeared. Since she normally sticks to me like glue, I was kind of curious where she went. Thinking back on this now, I guess I could have thought she was in danger, but that did not occur to me at all at the time.

She wasn’t in danger though. She found the swing, and was swinging by herself. She played on it literally the entire time that I rode. I couldn’t have asked for a better situation. The swing was my babysitter, and it’s right next to the ring, so I could see her the whole time that I rode. Plus, a small child swinging on a huge tree swing did not spook Stu, so that’s a bonus point for him.

We went out to the ring, and I began the groundwork that I learned from Amanda. As Stu trotted around on the lunge, I realized a bee was following him, trying to sting him.

I was at a loss at what to do. If I stopped Stu, the bee would sting him. But I can’t just trot him around indefinitely, like eventually he’s going to have to stop, and then he’ll get stung. I tried a couple of direction changes to get the bee to loss interest, but it did not. I have never seen such a determined bee.

I was trying to smack the bee with the whip, but that did not worked. It did make for a very forward Stu, though. Amanda told me to aim for that, so that part worked out. However, being stung by a bee might make him too forward.

Not knowing what to make of this situation, I texted my trainer to see if she had any bee related advice.

Turns out it wasn’t a bee, it was a bot fly. That explains it’s very un-bee like behavior. In my defense, they look extremely similar to bees.

With this new knowledge, I allowed Stu to stop moving, and he was happy. Not sure where the bot fly went though, maybe it did it’s dirty deed and moved on.

I got on, and had an incredible ride. I just did walk and trot, but I practiced a lot of transitions and turns. He was awesome. I didn’t have any trouble steering him, although stopping was a little wonky. Kind of surprising since stopping is literally his favorite thing to do. Perhaps still a little confused by all these new instructions he’s getting. But I’m thrilled that his steering has greatly improved, and he was very forward after being chased by me chasing that bot fly.

As to why I only did walk and trot? There was still a little uncertainty. I was all alone, except for Bridgette, and I didn’t feel fully confident, yet. But luckily, change was on the way.

After ride 2, I was soooo excited for ride 3. I’m still excited now for the next ride. It’s nearly all I can think about, when can I get to the barn next to ride? It feels like a part of me that was asleep for a very long time has suddenly woken up. All I want to do is ride.

I went to the barn again, although this time Amanda and another rider was lurking about, so I wasn’t totally alone. Once again, I pulled out Stu, he had manners, and there was no issues. Once again I lunged him, and then I got one, and he was so good.

This time we added in cantering, we worked on up and down transitions, we did some lateral work, we went over poles at the trot and canter. It was a dream. It was exactly what I wanted in a horse. He may have been a problem when he got here, but he wasn’t for me. I luckily didn’t get to experience any of the problem behavior, I just have the good boy behavior.

My body felt so much better, too. I didn’t feel stiff like the first ride, I felt much more supple, and my legs felt like they were wrapping around him much better. My back didn’t hurt at all. I still felt a little uncoordinated at the trot, as he has quite a big trot, but in time that’ll be ironed out.

I’m so excited to be working with him, and he is exactly where I wanted him to be, coming back from training. Maybe it was a rough adjustment to the new barn, maybe he was just super confused by the new instructions/expectations, but whatever it was, it seems to be over. He’s just good, very lazy, but still good! He does what I ask, and that makes me happy.

We’ll see how this continues to develop, but right now I am just over the moon. A bit more time with transitions, lateral work, and suppleness, and then I want to start jumping him. I think he’s just about ready for it.

He may be just a horse, not a mythological creature, but he kind of feels like a unicorn of a horse. It really feels like the 5 years of waiting for him to grow up, and me to be ready for him, were worth it. I can’t wait to see where this goes.

P.S. Have you seen my YouTube channel yet? Go check it out! I just put up a new video on Stu!