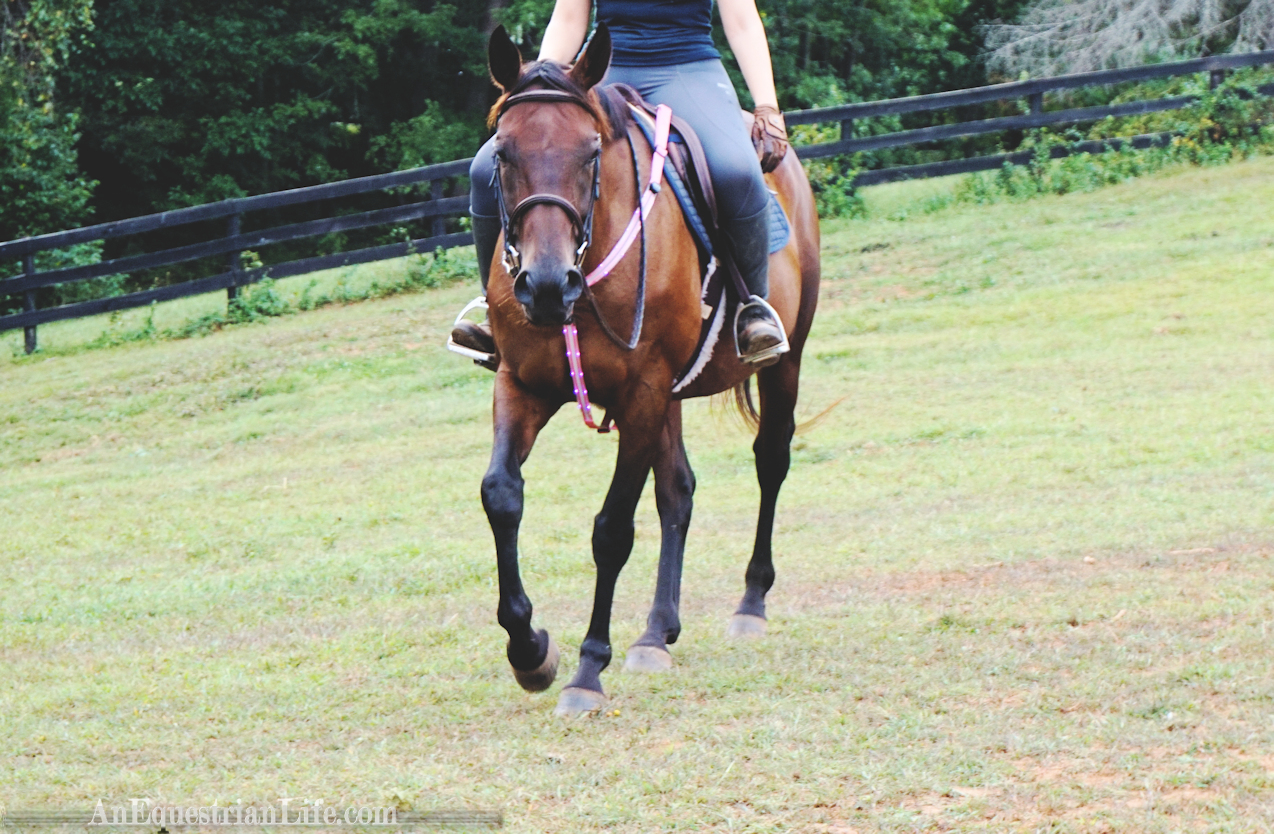 The Illumiseen Breastplate collar is a nylon breastplate with LED lights lining it. The lights have three settings: steady, blinking slow, and blinking fast. Illumiseen created this breastplate to increase horse visibility, and they succeed, these lights are bright. 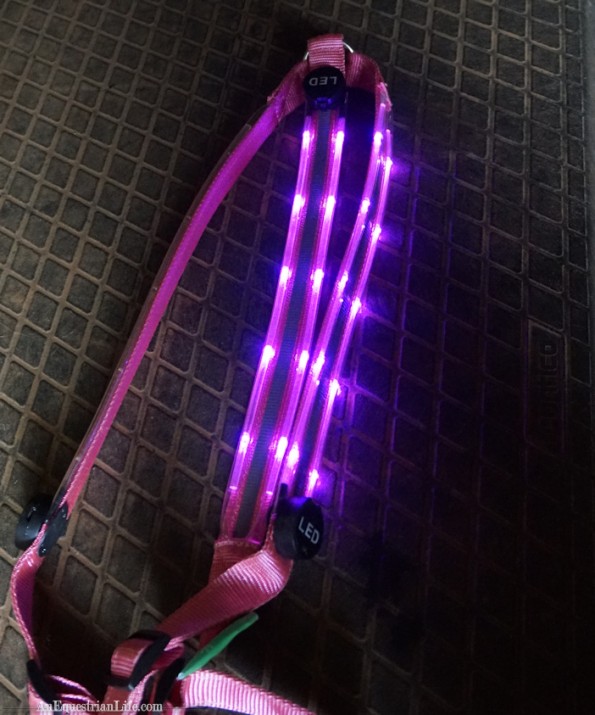 Illumiseen reached out to me, asking if I would like one to review, and I enthusiastically replied YES because I trail ride a lot, and I like to be very visible.

Have you ever thought to yourself, “Wow, I really hope I don’t get shot by a hunter today?” Of course you have! We all have these thoughts all the time! From the moment you park your car at the barn, to leading your horse into the arena, you keep an eye on that suspicious moving bush that seems to be following you around.

Alright, so maybe there isn’t a hunter stalking you at your barn, but if you go on trail rides, hunting season is serious. Hunters are supposed to identify what they are shooting before they shoot, and are supposed to use extreme caution, but you have to trust they will do it. They might not even be intentionally making an error, but sometimes eyes can be deceiving. Horses can resemble deer, they have four legs and some are colored similar, so be helpful and mark yourself. You really don’t want to risk getting hit.

With trails disappearing around here, I’m also forced to ride on roads. I really enjoy being seen and noticed while out there. I actually knew a girl who was riding her horse on the road, and a truck struck them. The horse died, but the girl survived. Riding on roads is dangerous. You need to be seen. 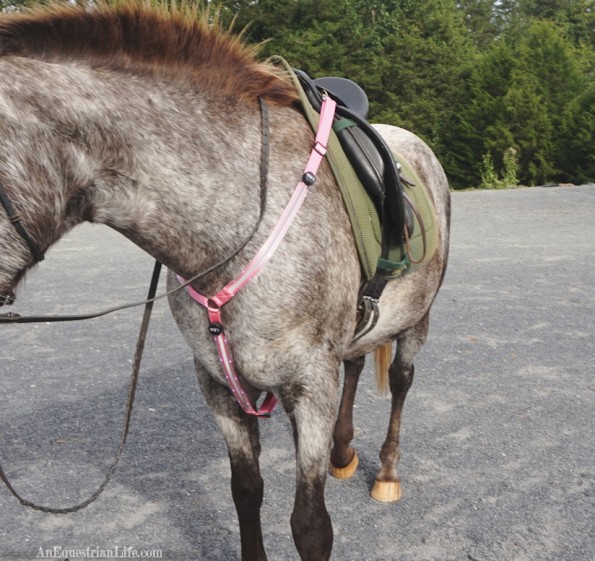 I tried the breastplate on my two horses. I could not try it on Pony, because the breastplate did not adjust that small. It could have gone a little smaller than its setting for Vintage, and she is about 15.1 hands and fine boned.

I adjusted it a little bit bigger for Berry. The adjuster only looks like it’s in the same spot because I think I had it uneven on Vintage. 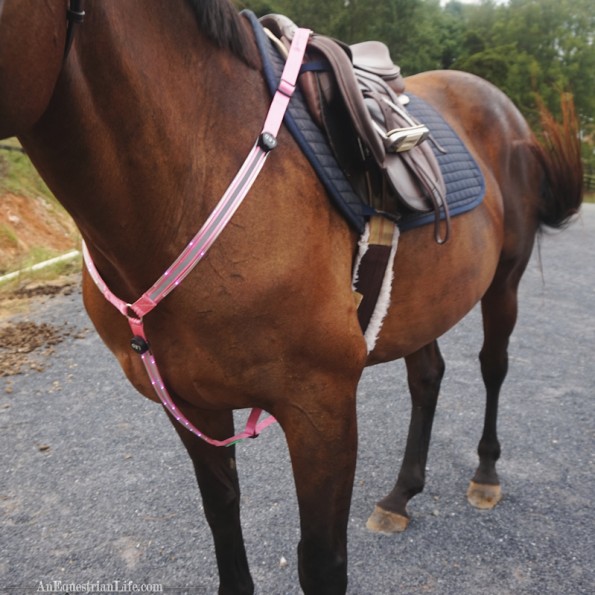 I usually use a martingale when I ride Berry. I think this is mostly habit than anything else, because that’s what hunter horses wear, dammit! But whether the horse needs it or not, it was not possible to have both the martingale and the breastplate at the same time. In hindsight, this seems rather obvious, but at the time, I just kind of stared dumbfounded, while wondering if Berry would still be the same horse without using a martingale. Spoiler: She totally was. Despite her complete ease, yes, I am still using the martingale for my normal rides, for reasons I don’t quite understand.

The breastplate connects with a loop at the girth, and has two clips for the saddle. I’m not used to a breastplate like this, as the closet thing I use (the martingale) has a loop that rests it on the neck first, before I attach to the girth and bridle. It would go on first. With this, I have to put the saddle on first, clip the breastplate on, and then attach at the girth. It threw off my routine, and I do with there was another cord attaching the two clip points so I could drape it over the horse’s neck, and then put on the saddle. That would work much better with my routine.

You can see the lights are bright enough to see in daylight. I was able to turn the lights on and off while mounted, and have LED strobe light disco as I rode. I went right along the road, and did not get hit by any cars. Was it because of my super amazing LED breastplate? Or are my neighbors just not a bunch of jerks who speed down country roads? Who knows!

Also important to note: The horses did not seem to be fearful of the strobe light, and no seizures were had. Your results may vary. 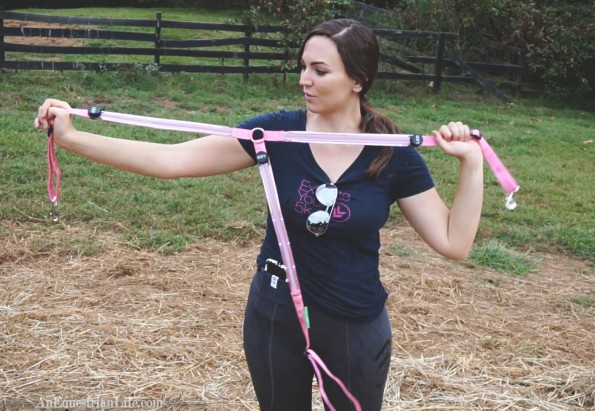 For a double review whammy, these Aztec Diamond leggings have no pockets, but have a fairly tight waistband. At the very least, my cell phone will stay inside the pant as it slowly makes its way down my leg.

The LEDs are charged with a USB charger. I left the LEDs on for several hours to see how long it would take to run out the battery. Unfortunately, I did not find out because it would not die. I turned it on at my first ride, right about 2pm, and left it on until about 9pm, because I wanted to go sleep at that point. It will last a day of trail riding, into dusk and nighttime. Or, if you have it on and part ways with your horse, it may help your horse be found more quickly.

The Illumiseen breastplate can be purchased on Amazon, and comes in a variety of colors. I wanted pink because not only do I like pink, it’s bright. For maximum visibility, go bright. Illumiseen also has other products. There are dog collars and leashes, and lights for joggers and bikers. As the days are getting shorter, I’m tempted into getting those collars for my beloved little dogs, as I’d like to see where they are when I let them out. It’s time to light up everything in here! …but only with LED lights.