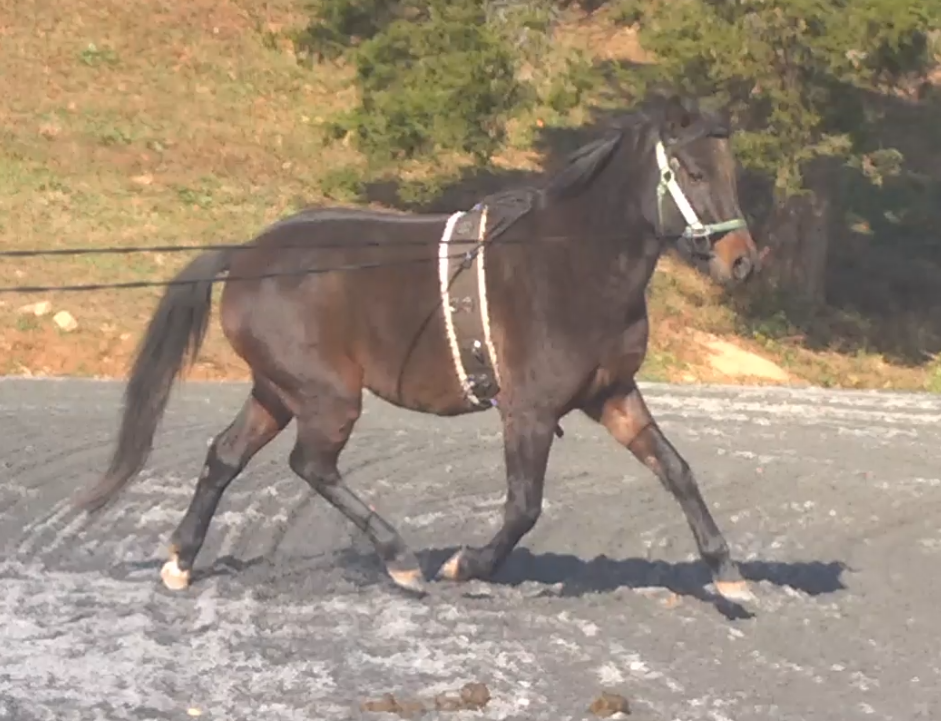 On Tuesday I bid a tearful goodbye to Pony Man, as I dropped him off at his trainer’s barn. This time, I was the one sobbing, as Pony was way more interested in the farm dogs and the strange little furry creatures that pushed up to his legs. I don’t have any cats, so this could have been the first time he’s seen them since he was a wee little foal.

Now he is a wee little adult pony of dignity and grace.

Once I decided he was going to be sent out for training, I organized it quickly. He’s more than ready for training, plus if I get him out now it means one less horse to take care of over the winter. And my hay will last slightly longer with only two mouths to feed. Although really, as a small pony he didn’t eat very much to began with.

I sent him to the same trainer I bought Berry from. She’s fairly local, and she’s pretty awesome, so I figured it would be a good fit. I got up super early on Tuesday to deliver him before work.

It was darker than this, but I thought a picture of darkness wouldn’t be very exciting.

He knew something was up, but even though he gave me many looks of doubt, he was lured into the trailer all by his little self with the temptation of horse cookies. He’s an easily bribed pony. As soon as he was tied in there, and the trailer closed up, he started calling for the others. There was no response, which made me feel slightly bad for him. Poor, friendless pony. On the other hand, no horses jumped/crashed into the fence line rushing to save him, and frankly, that’s the kind of response I prefer! (although when I got back later in the day, Vintage did call for him at least once, so she may have noticed he was missing. Berry still may not have cared.)

“I demand someone care about me immediately!”

Then we took the hour and a half journey to his new temporary home. I ended up on a slightly confusing route, so at one point I had to pull over and consult GPS and maps (yes I’m that old) to figure out where the heck I was. Of course, since I’m in a truck and trailer, pulled over on a rural highway/neighborhood, I felt both very awkward and relieved that probably no one cared since I was in a rural area.

Eventually I managed to arrive, and guided sweet gentle Pony Man off the trailer. This time he figured out quickly he needed to reverse to get off. He was immediately interested in his surroundings. Unlike his last field trip though, he was excited in a curious way, instead of a meltdown way. Progress!

Even though he wanted to look at everything all at once, he followed me around like the gentleman he is, and went into his new stall. Then, since he’s so small, and the door and wall are so tall, he made faces at me while straining to still see me.

When you’re this little, your face always looks like this when you try to see over things.

After some goodbye scratches that he would not dignify himself to enjoy, I left him there. It’s hard to leave my little baby where I can’t see him every day. It’ll be worth it when he comes back as a solid little pony citizen though. In the meantime though, I’m going to go cry into my pillow about my little guy being so far away from me. Hopefully will have an update on his training in about two weeks!