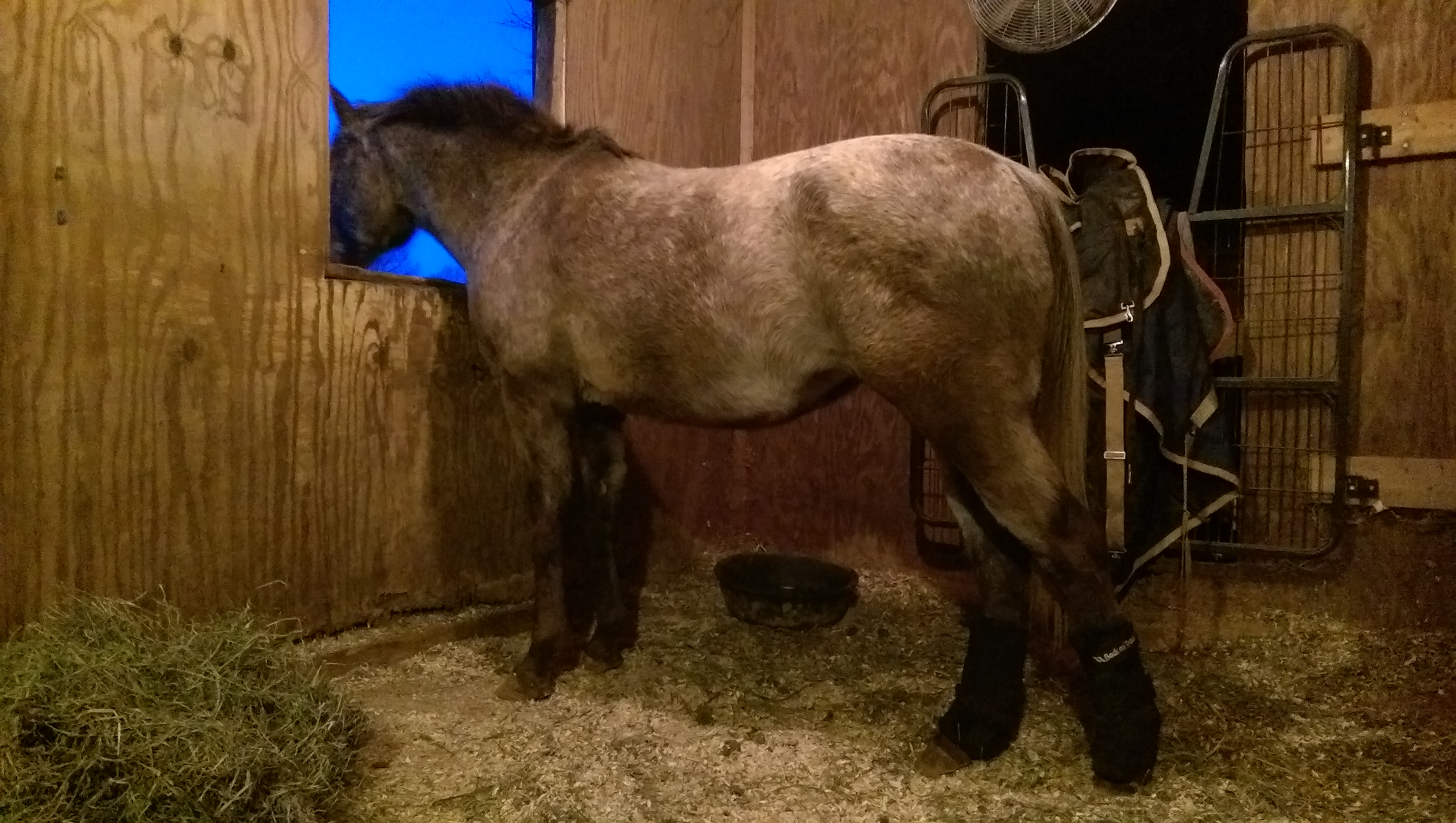 It finally stopped snowing. Hurrahs are in order.

“Now that I’m in the barn, I can stare outside, and also give you the stink eye for letting me get covered with snow.”

Dave was running his glove across the bars. Berry was intrigued.

Then she just wanted to watch the snow.

There was lots and lots of snow, and lots and lots of wind. Dave and I dug lots of paths, but after realizing how far away my barn is from my house, I decided it was easier to just struggle through the snow.

I started to climb this drift, and then just tossed myself over and rolled down the other side. Since the snow was so powdery, I just landed and sunk in, and then had to dig my way out.

The barn created a wind tunnel and made for some interesting snow drifts. And yes, my barn is blue, to match my blue house. I think the previous owners wanted to blend in with the sky.

That snow drift up close.

What remains of the water trough. I’ll save you soon, little buddy! (you can also see my blue house… or can you!? It’s in camouflage mode)

I let the horses out this morning, and they were confused by the snow. “How did this get here?!” Vintage got over it quick, and just started munching hay. Berry did the “what is this?!” snort and pranced around a bit. Of course I didn’t have my phone to take pictures. Of course.

She had too much pent up energy, and while I dug paths for them, and saved the water trough from disappearing, she honked and leapt into the deep snow, only to be disgruntled when she discovered it was up to her belly. Then, since all I could see was her blanket, she appeared to glide along the top of the snow, powering right through it. Then she got close to the cleared part and sprang up over the last bit. I guess I wasn’t giving her enough credit in the past, she seemed pretty athletic.

Since I was standing in the cleared part, being that I was the one clearing the snow, she kept springing back to me, coming a bit too close at too high a speed. But at least she would slam on the brakes to give me a nudge, and then spring away. She did the same to Vintage, who grew increasingly grumpy with her getting so close and started biting her every time she came by. Even though Berry is normally quite respectful of alpha mare Vintage, she didn’t seem to care at all this morning, just kept leaping and running in the snow.

She also stuck half her face in the water trough and started sloshing the water around. I warned her that her nose would freeze, but this didn’t seem to bother her.

Being that she’s Berry, she eventually ran out of energy and finally just stood eating hay. I also ran out of energy and stopped clearing snow, so now they just have a 20×20 square of cleared area to stand in. Basically, the same amount of space they’d have if they were still in their stalls, although they’d be sharing one giant stall. Since I don’t have room to walk them around in my barn, I think it’s better for them to be out where they can move around a bit, even if it’s not very much at all.

When I came back up to the house, I saw water dripping. It’s melting! More hurrahs!